The Fifty Shades Trilogy Climaxes with a Whimper

Plus, Peter Rabbit is an agreeable update on a classic character, The 15:17 to Paris is a well-meaning misfire, and the new Queer Eye is charming and addictive. 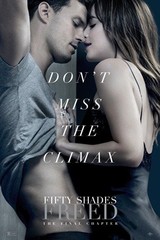 No matter how humble it may seem, you can never really tell what might happen if you follow an idea. Take author E.L. James, for example: after being inspired to write some Twilight fan fiction, she found herself with the erotically charged tale of a billionaire bondage enthusiast and the young publisher’s assistant who captures his heart. From that simple setup sprouted the Fifty Shades of Grey trilogy, which sold more than 125 million copies — thus prompting the film franchise that concludes with this weekend’s Fifty Shades Freed. As they did for the first two installments, Dakota Johnson and Jamie Dornan play unorthodox lovebirds Christian Grey and Anastasia Steele, who enter the concluding chapter of their big-screen story as newlyweds; of course, even as domestic bliss beckons on the horizon, there are complicating factors waiting to muck things up, like the petty squabbles of married life — not to mention some potentially far more nefarious developments. Unfortunately, Dornan and Johnson aren’t the only things that have remained the same for Fifty Shades Freed; critics’ widespread disdain for the franchise is also right where they left it last time around, making this one trilogy that’s managed the wrong kind of trifecta with the pundits. If you’re a Fifty Shades fan, you probably aren’t reading many reviews anyway, but if you were waiting to see how the Tomatometer would shake out for the series conclusion, the answer is probably as disappointing as it is unsurprising. 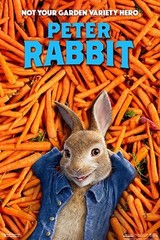 Since making his debut on the pages of the 1902 classic The Tale of Peter Rabbit, Beatrix Potter’s most famous creation has proven a persistent favorite for generations of young readers — and he’s hopped his way onto the screen numerous times. He’s never quite gotten the Hollywood push he’s getting with Peter Rabbit, however: from this Columbia-distributed effort’s up-to-the-minute CGI animation to the all-star voice cast that includes big names like Daisy Ridley and Margot Robbie as well as late-night fixture James Corden in the lead, few corners appear to have been cut in terms of the movie’s look and sound. What has been cut, to the dismay of some critics (particularly those in the U.K.), is much of a connection to the Potter tales that brought us these characters in the first place — with rock songs on the soundtrack and modern slang in the script, this Peter may have more in common with the bunny Russell Brand played in Hop. Does this mean kids won’t have a good time? Not at all. In fact, quite a few of the pundits say Peter Rabbit is actually a pretty good time for the younger set — just don’t expect anything that really resembles the fuzzy little fellow you’re used to. 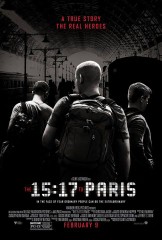 On August 21, 2015, a man riding a train traveling from Amsterdam to Paris opened fire on his fellow passengers. Although several people were injured, the attack was ultimately foiled by a group of fast-thinking commuters who fought back, disarming and finally subduing their assailant. For obvious reasons, the incident made headlines worldwide — and now it’s getting the big-screen treatment courtesy of director Clint Eastwood, who’s dramatized the events with The 15:17 to Paris. Not content to give this story the average Hollywood treatment, Eastwood took the surprising step of casting three of the survivors — Spencer Stone, Anthony Sadler, and Alek Skarlatos — as themselves. It’s a bold gambit, and unfortunately, critics say it didn’t really pay off; Eastwood, never one to spend undue time laboring over his productions, has applied his trademark streamlined style to Paris, and reviews describe a well-intentioned drama whose seams all too often show in the performances. Even more problematically, the script strains to wring a full-length feature’s worth of drama out of an act of violence that was over in a few minutes. Eastwood has more than proven his mettle as a helmsman for fact-based cinema, but this time out, it looks like he missed his mark by a surprisingly wide margin.

Queer Eye adapts for a different era without losing its style, charm, or sense of fun, proving that the show’s formula remains just as sweetly addictive even after a change in location and a new group of hosts.