Plus, "Bucky will never not have to do work," she says. 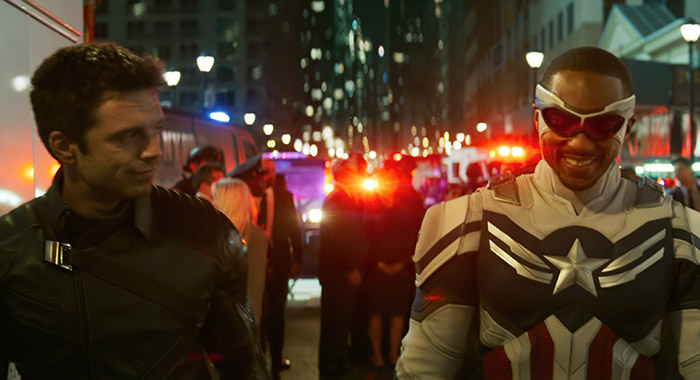 The Falcon and the Winter Soldier ran its last episode last week, but some questions about its finale and themes still linger: from production realities of a series made during the pandemic to whether or not John Walker (Wyatt Russell) is a hero.

Series director Kari Skogland took a few minutes this week to talk with Rotten Tomatoes about the show and some of its facets, including the thinking behind Sam’s gesture for Isaiah Bradley (Carl Lumbly) and the visual tricks used to make Walker’s disposition more ambiguous. She also addressed a rumor about a deleted storyline and outlined some of the ways the COVID-19 pandemic had an impact on completing the show. 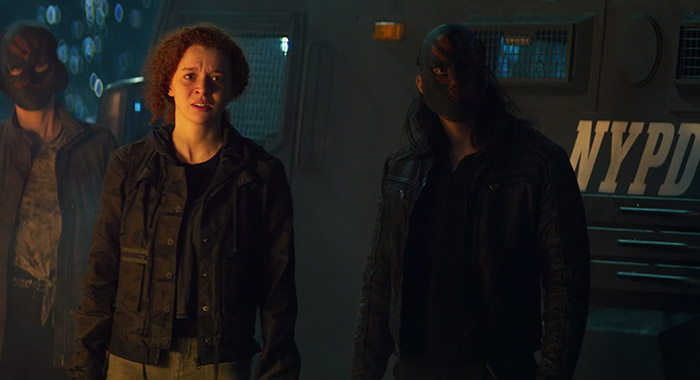 In the run up to the finale, word began to spread that the COVID-19 pandemic had done more than just delay production of the series. According to the reports, a plot involving Karli (Erin Kellyman) and the Flag Smashers was dropped during the months of delays. Skogland denied such a storyline ever existed.

“There was no virus storyline,” she said. “The pandemic did not change our storyline, because we knew what we were shooting before[hand]. We were always telling the story we were telling.”

Production began in October 2019 in Atlanta, Georgia, continuing apace through the year. Filming moved to the Czech Republic during spring 2020, where it was shut down a few weeks short of completion: “We had shot 75 percent of it when we got shut down,” Skogland said.

The production shutdown did impact the series in other ways, though; for one, post-production began earlier than expected, leading to some of the program’s extra polish, according to Skogland.

“For the remaining 25 percent [we needed to shoot], we were able to sharpen our pencils a little bit,” she said. “We were able to focus the characters a little bit here and there. [And] through the editing process, we moved a scene, or we shifted something.”

But one real-world event that definitely changed the program was a major earthquake in Puerto Rico on January 7, 2020. The plan was to shoot in Arecibo, near the famous radio observatory (which, sadly, collapsed in late 2020).

“We had fully built our sets. We were ready to go. It was two days before we left that the earthquake happened,” Skogland recalled.

The locations were “beautiful,” and she looked forward to working in the U.S. territory still recovering from the devastating 2017 Hurricane Maria, the subsequent Hurricane Dorian, and 2019’s Tropical Storm Karen.

“We couldn’t go for safety reasons,” Skogland said. “We felt sad that we weren’t able to go there, but we pivoted.”

The material planned for Puerto Rico shifted largely to the Czech production block.

During the shutdown, Skogland and the rest of the crew noted how real life mirrored some of the themes of The Falcon and the Winter Soldier during 2020’s summer of protests and social media punditry.

“The political arena was doing exactly what we expected it to do,” she said. “And so what was the protests and what was happening was [also] our story. We couldn’t believe that life was imitating art and that the conversation was becoming, once again, more relevant.”

As we noted across the series’ run, its ruminations on the response to a Black Captain America, the burying of Isaiah Bradley’s story, and even the way John Walker was positioned as the new Captain America reflected some of the deep scars still unexamined in American history. 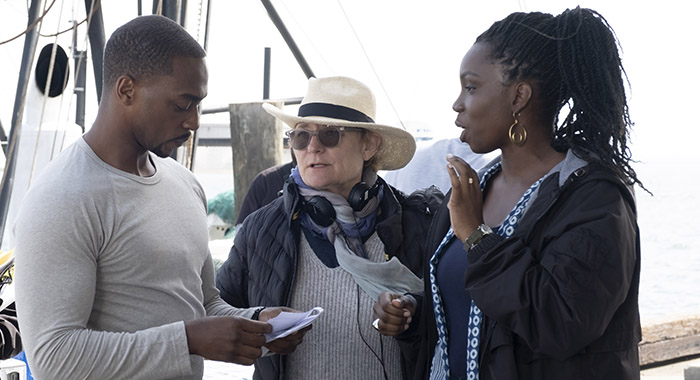 And while not all of the ideas fit satisfyingly in a Marvel superhero television show – as some of its critics have pointed out – that they are addressed at all in Marvel’s relatively happy-go-luckily cinematic universe is surprising.

Also, as Skogland added, “This was not a new conversation, this storyline – the idea of what the world was facing – is ongoing.”

Getting Justice for Isaiah 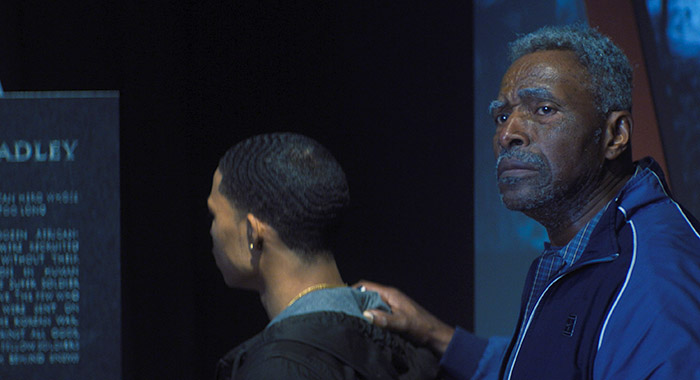 One of those places where the perspective can continue to evolve is the program’s seeming resolution for Isaiah. As glimpsed in the final moments of episode 8, Sam was able to get Isaiah and his company honored within the wing at the Smithsonian where most of the Captain America and Howling Commando artifacts are on display. The exhibit, first established in Captain America: The Winter Soldier, was important to Steve Rogers (Chris Evans) and a place imbued with much meaning through its repeated appearances. See also: Bucky (Sebastian Stan) learning about himself within the wing during The Winter Soldier’s stinger scene.

It is also, arguably, a good place for Isaiah to be recognized while still respecting his privacy and valid grievance with a country which experimented on him and threw him in prison for 30 years. The way Skogland pictured it, it was important for the exhibit not just to recognize Isaiah, but Black men who died in service to the country.

“That’s why I put all the different pictures on the wall, the evolving imagery of the Black soldiers,” she said. 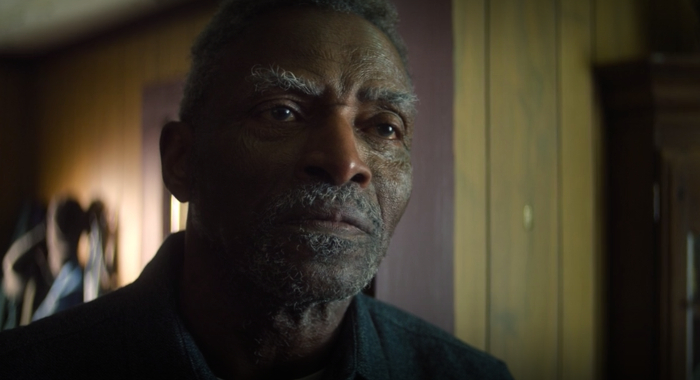 Although the statue of Isaiah is the focal point, Skogland said the overall layout reflects Sam’s appreciation of what Isaiah, his company, and the experiences of the Black men who went before them.

Nonetheless, because Isaiah comes from a place of legitimate bitterness, the shock of that recognition can only be the beginning of healing. It remains to be seen if his story will continue in some way – Marvel fans are already pointing at his grandson, Eli (Elijah Richardson), as an eventual Young Avenger – but the scene offers some catharsis. Skogland credits a lot of that emotional content to Lumbly himself. 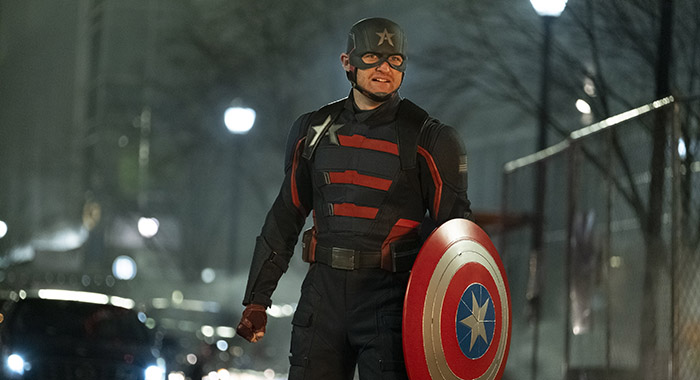 Creating a visual sense of Walker’s ambiguity and ever-changing priorities was a constant set of visual choices for Skogland.

She pointed out his first appearance, what she called a moment of discovery, as a key example of the way the camera regarded him. At first, “[you] could barely see him … until right until the very end, when he winks at the camera,” she said. She credited Russell with the wink and its accompanying change in camera angles to accommodate his performance.

“Then other times when [Walker’s] shamed and he’s making his way in, I wanted the world to be unsettled, but not in a handheld kind of way, just [the camera] constantly moving in on him — it felt like the world was closing in,” she continued. 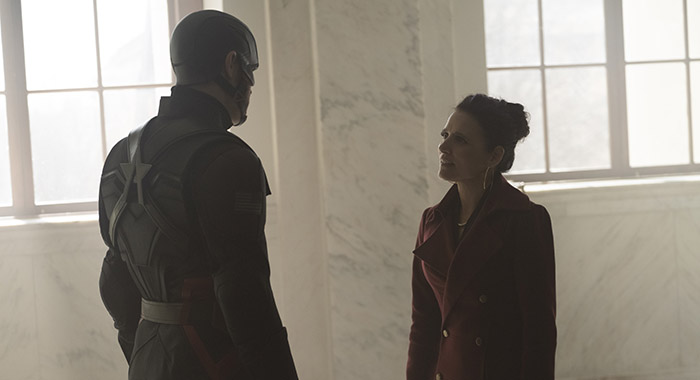 Other examples include the more intense closeups when he first meets Contessa Valentina Allegra de la Fontaine (Julia Louis-Dreyfus) and those shots framing him in contrast to Lemar’s (Clé Bennett) family as he tells them what happened and begins to mythologize himself.

“It was important that we chose the perspective,” she said. “I used tighter focal pulls and we were right in his face and used some harsh lighting outside when he’s walking [away.]”

That “fluid language” augmented the ambiguity of the character, which may be why some viewers were surprised by his heroic moment during the finale; the visual language seemed to indicate an antagonist path. It remains to be seen, of course, if the photography will change in a subsequent appearance to highlight him as hero or villain.

How the Work Heals Bucky 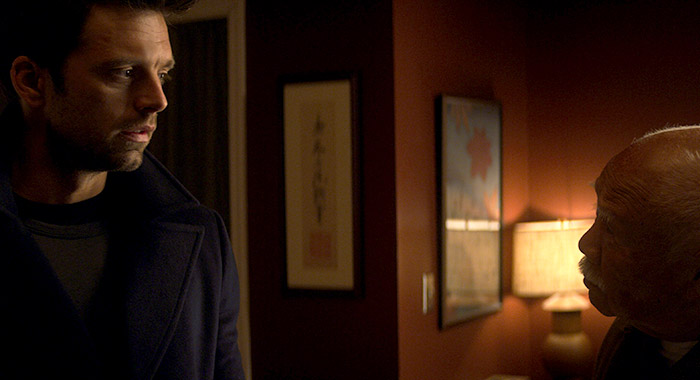 As we suggested in our look at the finale last week, we’re unsure if Bucky really did the work as Sam suggested, but Skogland reveals that last shot of Steve’s book denotes a certain endpoint for Bucky’s therapy.

“We crossed everything out,” she said. But she also added Sam’s suggestion of service was also meant to reframe Bucky’s understanding of making amends.

“I think what was the inspired thing that Sam tells him to do – which opened the doors – was say, ‘Oh, by the way, this is less about you, and this is about that,’” she explained.

“Until then, he had been looking at it from an almost selfish place – ‘if [Steve] could fix me, and I will therefore fix them,’” she continued. 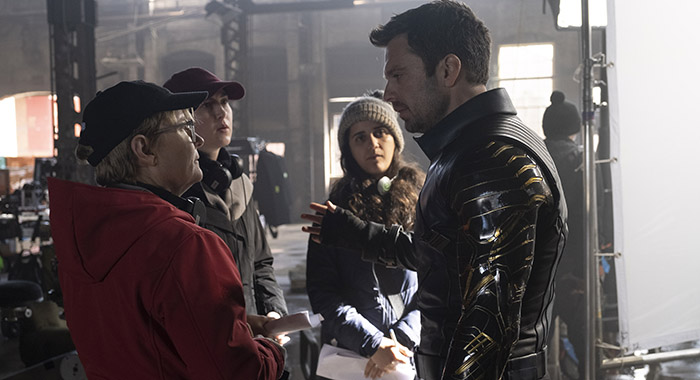 Doing the work, as Sam suggested, offers the Winter Soldier’s victims some closing, even if it never offers Bucky a path to making good on what he did. At the same time, it also offers Bucky a certain freedom through acknowledging his guilt: a notion touched upon when he finally admits to Yori (Ken Takemoto) that he killed his son.

“I would say that Bucky will never not have to do work,” Skogland added. “I think he’s always going to be on a precipice of it, [and] I don’t think he’ll ever be lighthearted about it.”

Nevertheless, that work will be healing for the character and, presumably, an aspect of any future appearances he might make.

Learn more from Skogland and her team in Marvel Studios Assembled episode “The Making of The Falcon and The Winter Soldier,” now streaming on Disney+.