Anne Rice’s Mayfair Witches is the next series on the docket for AMC that aims to further expand the network’s small-screen universe inspired by the iconic author’s work, first established by Interview With the Vampire, which premiered earlier this month.

At the center of the story is brilliant neurosurgeon Dr. Rowan Fielding (Alexandra Daddario), who discovers she has special abilities and is directly related to a family of witches. As she attempts to reconcile these powers, and this newfound lineage, Rowan is faced with an unfamiliar world and a supernatural presence that has haunted the Mayfair family for generations. 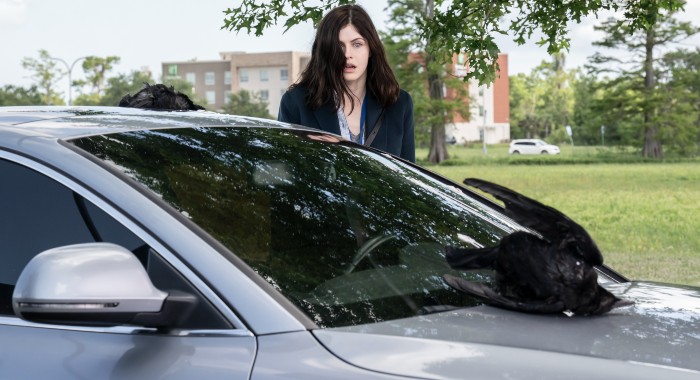 Based on Rice’s Lives of the Mayfair Witches trilogy, the series follows the same beats of The Witching Hour, the first book in the series. As star Jack Huston, who was joined by castmates Harry Hamlin and Tongayi Chirisa during an intimate chat with Rotten Tomatoes before taking the stage for the show’s official panel at New York Comic Con, explained, the new show takes creative liberties where it can.

“It’s a very large book with a lot of different characters,” Huston, who plays Lasher in the series, said. “I think when you’re making a show like this, I think you have to be quite picky about what you can exclude.”

“It’s interpretive,” Hamlin, who plays Cortland Mayfair, the matriarch of the family, added: “Some of the characters have been amalgamated. It’s not exactly the book, word for word. But I think, in order to make a show that might go on for years and years, they would have to open it up, and they have.” 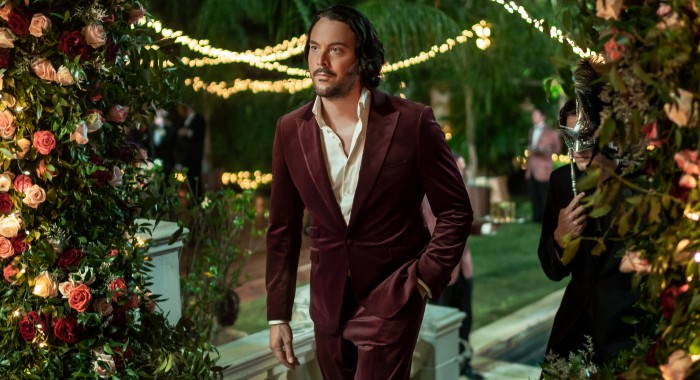 Daddario later explained during the show’s panel that she took the research seriously and delved head-first into Anne Rice’s library. Apparently, it was common to see the actress carrying around at least one book at all times. “1,000 pages, you’ve got to get through it,” she said.

Daddario’s Rowan, and the characters that Hamlin, and Huston are playing, Cortland and Lasher, aren’t just directly lifted from Rice’s books, but they share an otherworldly connection, as well.

“A dark entity spirit,” is how Huston describes his character, explaining that Lasher “belongs to each one of these Mayfair Witches that inherit him, or he picks, or he chooses.” Alluding to his “great power” and an “ulterior motive” he carries “throughout the show, which later comes to light,” Huston explains that not everyone can see Lasher. But Cortland can, and eventually, so will Rowan.

“You can’t interact with Lasher, but Cortland can,” Hamlin added.

But who, exactly, is Cortland Mayfair? For one thing, the patriarch of the Mayfair family didn’t live on as long in the books, Hamlin revealed: “I live on in this iteration of it. Also, he’s the life of the party.”

But, unlike those that live under his guidance, he added,”[Cortland] doesn’t have any powers, per se, at least not in the first season, other than his domination of the witches and his ability to see Lasher, which most people can’t see.” 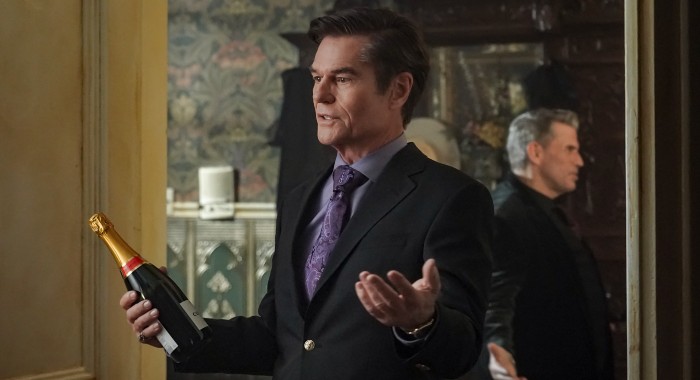 Rowan, Cortland, and Lasher are names that are familiar to fans of the books, but Ciprien Grieve, played by Tongayi Chirisa, is a new face to the world.

“He’s an amalgamation of two characters: Aaron, who was a Talamasca agent, and Michael,” Chirisa explained. The Talamasca is a secret society of psychic detectives who monitor any and all strange supernatural phenomenon, and Michael was a Mayfair cousin with powers of his own.

“My character, his main job is to observe anyone or any group of people that manifest supernatural abilities,” he continued, teasing his own supernatural ability to see into the past. “We observe until it is absolutely necessary for us to intervene.” 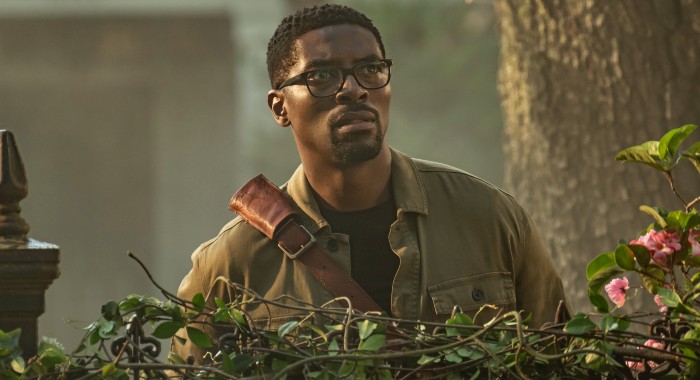 “When she does show up, it’s kind of we don’t know whether it’s a total surprise or not,” Hamlin added. “But all of a sudden, [Cortland] knows he’s got work to do, because she’s a force to be reckoned with. She’s a very important witch. There is a, sort of, order of witches and you find out her role and her powers far exceed most others, because she is a very important number.”

Obviously, Mayfair Witches isn’t going to reinvent the genre wheel when it comes to witch representation in entertainment. But maybe that’s not the point.

“Anne Rice, she’s the veteran,” Chirisa added. “I think a lot of these shows that came after her pretty much nitpick from her. So, just going back to the original of the Mayfair book that, for those that haven’t seen it, I think it’ll be a great insight to the originator of this fan favorite type of storytelling. I would say it’s refreshing, because it is, in a way. We’re kind of like going back to the roots.”

Historically speaking, the cultural idea of what a witch actually is came from the persecution of women.

“They always say that witches sort of come from those that are healers, midwives, and the like,” Huston said. 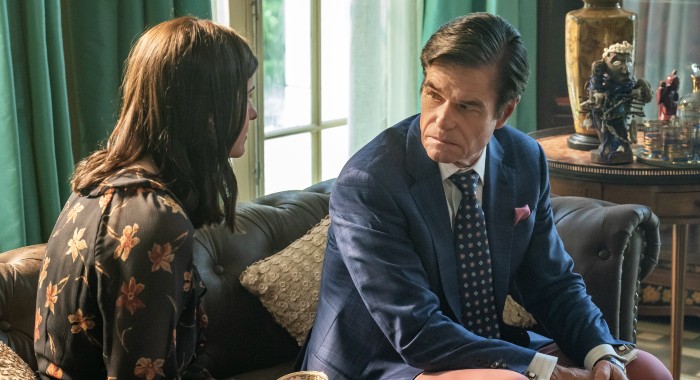 “So it’s based on actual truth and all these witch hunts that happened in history,” he added. “People who had a healing quality, and it’s interesting to me that they made Rowan, the lead protagonist, a doctor. She’s a brain surgeon and someone who’s taking away the sort of archetypal idea that witches are bad. There’s obviously an ominous and dark presence within all of us and lives both in the physical and metaphysical, I guess, world. But it’s a really cool one to discover and play with.”

Hamlin and Huston both acknowledged the female-centric narrative at work in The Mayfair Witches, giving credit to Anne Rice who, Hamlin added, “always wrote strong women.”

Still, this is a horror series and by the look and feel of the official trailer, it’s apparent that Mayfair Witches is going to play with an off-kilter tone as the story follows Rowan into this unfamiliar macabre world. 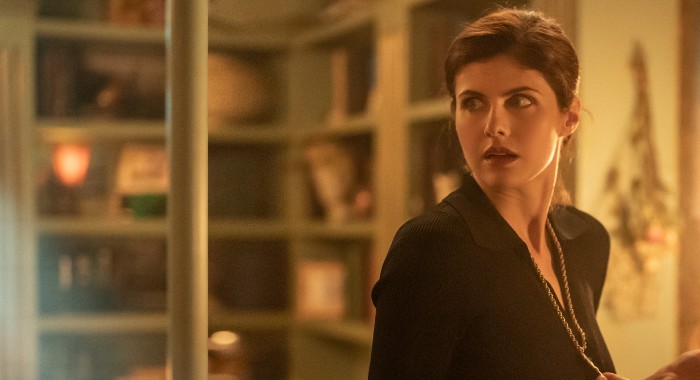 “While there are things that feel familiar, it’s very perverse,” Daddario shared previously during the show’s panel during the Television Critics Association Summer Tour.

“It’s very disturbing in these uniquely psychological ways that only Anne Rice could do. And we’re bringing it into the show. I just think it’s incredible to do something that is based on an Anne Rice novel. And to also bring that unique touch of weirdness — and just her investment in the dark side of human nature — with no rejection of it. That creates a real unique genre piece, I think.”