The Best Comic Book Shows (and Seasons) of the Last Decade

From Arrow to Watchmen, Comics on TV columnist Erik Amaya chooses his favorite TV of the decade with roots in comic books.

The 2010s were an exciting time for comic book–based television shows. The decade began with Smallville demonstrating a superhero show could be done on a budget, pull off the occasional iconic comic book moment, and sustain an audience for ten seasons. Almost immediately after it left the air in 2012, a whole second generation emerged to prove you can be faithful to the source material and still strike out in new directions. Soon, we had a whole superhero multiverse dominating one network’s lineup, a S.H.I.E.L.D. television show offering a weekly dose of the Marvel Cinematic Universe, and even a few shows proving comics can offer television prestige-caliber material.

Of course, as we reflect on the decade past, only a handful of shows — or seasons of shows — can truly prove to be exemplary of the types of stories comics pioneered and still make for great TV. Some shows stand above the rest in terms of consistent quality, while others deserve recognition for the key time they got it right or advanced their genres on television. These 10 shows reveal just how wide in scope and far in storytelling we’ve come since Smallville started the 21st century’s comics on TV revolution.

With only one season under its cape, Watchmen did two impossible things: 1.) It adapted the classic comic book by Alan Moore, Dave Gibbon, and John Higgins into something wildly different, yet wholly consistent as the source. 2.) It got AT&T to pay for a long-form treatise on American racism. And even if that topic had not become relevant in the last few years, Watchmen would still feel worthy for using this specific comic book to talk about these issues. Considering how much the source embeds itself in American history, taking this angle feels like mining the original comics’ great missing chapter. Meanwhile, the show features some powerhouse acting talent with Regina King, Louis Gossett Jr, Jean Smart, Yahya Abdul-Mateen II, and Tim Blake Nelson delivering better and better performances each week. Though the most recent entry on the list, it’s certainly earned its place.

Though it wavered in the second season, Legion proved one can take the basic concepts behind the X-Men and make a provocative, meaty, and artistically diverse program. With its dance sequences, rap battles, and genre-bending episodes, creator Noah Hawley put his directors in the driver’s seat as they found unique ways to further the tale of Charles Xavier’s son David (Dan Stevens) and his cohort of would-be saviors. And in the end, it left us feeling as though we watched the most compelling X-Men prequel ever devised. Well, a prequel if you consider the future they showed Xavier (played by Harry Lloyd in the third season) was prevented by him founding the X-Men. 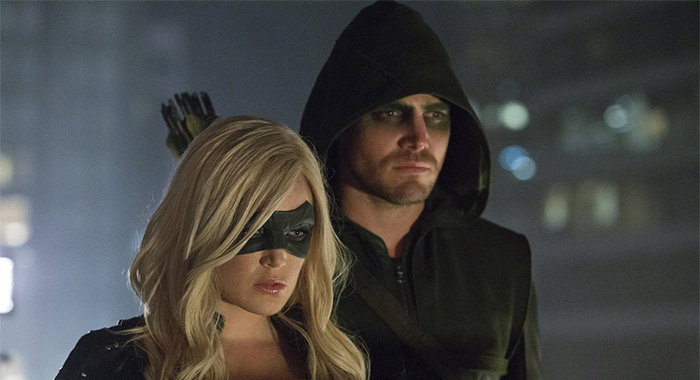 We’ll be honest, Arrow’s quality wavers in the extreme, but its second season was a standout in terms of achievement and intent. Intended to be a season-long tale called “City of Heroes,” the show expanded its universe with the arrival of Sarah Lance (Caity Lotz), the return of Slade Wilson (Manu Bennett), and the debut appearance of Barry Allen (Grant Gustin). It was also the year its flashbacks to Lian Yu felt the most resonant. In that story, we see what turned Slade from Oliver’s (Stephen Amell) best ally into his worst enemy just as the present day story carefully built up Slade’s plan for revenge. The show would try to mine that idea the next few seasons, but the device never works as well again as it did here. Also, this season set the standard for all the Arrowverse shows to follow.

In its final run on Netflix, Daredevil finally found the tone it needed all along: a tense legal thriller in which the plucky lawyer just happens to be a vigilante who fights people on rooftops. Very loosely based on the classic “Born Again” comic book story line, the third season played to all of the show’s strengths by pitting Matt Murdoch (Charlie Cox) against Wilson Fisk (Vincent D’Onofrio) once again and pairing down all of the characters to their essentials. This technique even extended to its one major introduction: Wilson Bethel as a not-yet-Bullseye whose usually ambiguous origin becomes definitive and downright compelling. And though we previously said the series felt complete with season 3, we would have loved to see this take on Daredevil continue. 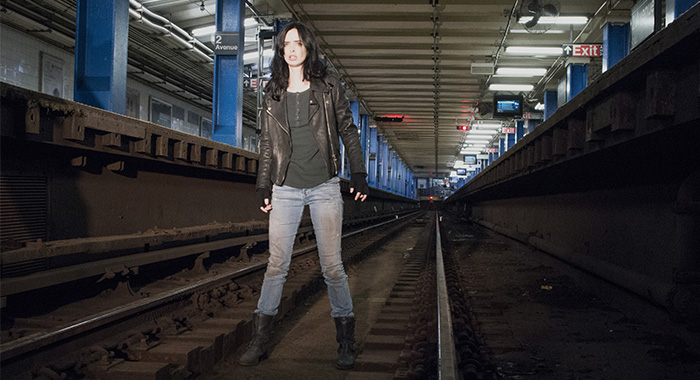 Taking its cues from the early issues of Marvel’s Alias comic book and the later “Purple” story line, Jessica Jones‘ first season continues to be the most satisfying of its three-year lifespan because it is directly about something: surviving rape. Thanks to the stellar performance of Krysten Ritter as Jessica — and, of course, David Tennant as Killgrave — the program used superhero trappings to talk about astonishing mental anguish and what people do to cope. Consider the way Jessica avoids any sort of support while Malcom (Eka Darville) almost immediately forms a support group for Killgrave’s victims. Sure, Jessica’s ultimate answer is violent, but it is cathartic. The story also gave the series a focus it would never have again even as it continued to produce quality work.

Swamp Thing was not just true to its comic book roots, it was true to a whole genre of comics — DC’s horror titles of the mid-1980s and early ’90s. Moody, gothic, and as often about relationships as existential terror, they were the post-Punk books DC needed to produce. And as a short-lived DC Universe original series, Swamp Thing captured this feeling in episodes like “Darkness on the Edge of Town,” in which an old evil in the swamp returns, passing from person to person as it tries to create more death and despair. The story feels like a single issue of Hellblazer or Swamp Thing while also serving the program’s ongoing plots. The series also served up the production values Swamp Thing always deserved. Sadly, that dedication to quality and fidelity meant the series enjoyed an all-too-brief life.

While the series made a number of strides since Rick Grimes (Andrew Lincoln) woke up in that hospital — and some wavering moments in quality — season 8 and its “All Out War” story line may be the best run of the series to date. It is the last time the core characters were unified, both physically and in purpose. Say what you like about Negan (Jeffrey Dean Morgan), but he brings people together — even if the vast majority of them united just to bring him down. And there is that magic moment when Negan met Shiva. The season also gave Rick the win he so badly needed, even if it cost him his son Carl (Chandler Riggs). For a show loathed to traffic in happy endings, this was Rick’s chance at a vanquishing a foe and the closest it could come to letting its protagonist have anything remotely “happy.” 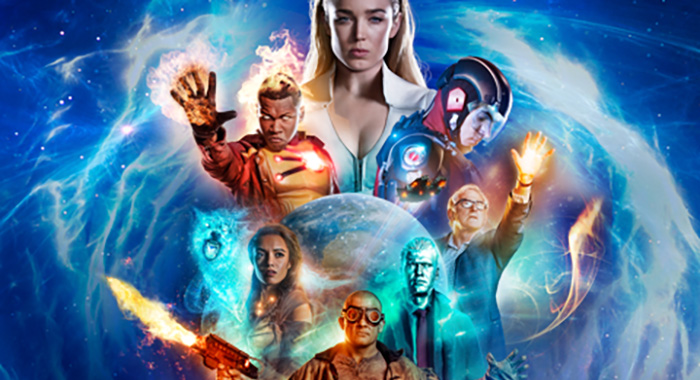 Proving superheroes can be wildly funny while still saving the universe, Legends fully shed the dour trappings of its first season with this inventive and off-beat year. The initial story saw the Legends fixing time after nearly tearing it asunder the previous year. But their efforts to patch the timestream also let a literal demon into their world. John Constantine (Matt Ryan) made a few appearances to help with the magical angle while Zari Tomas (Tala Ashe) arrived to abuse her snack privileges aboard the Waverider and call out the team for their constant failures as heroes — although she proves equally disposed to goofing off in the end. Also, the season gave us Beebo, and how can we resist its strange “must-have-Christmas-gift” power? 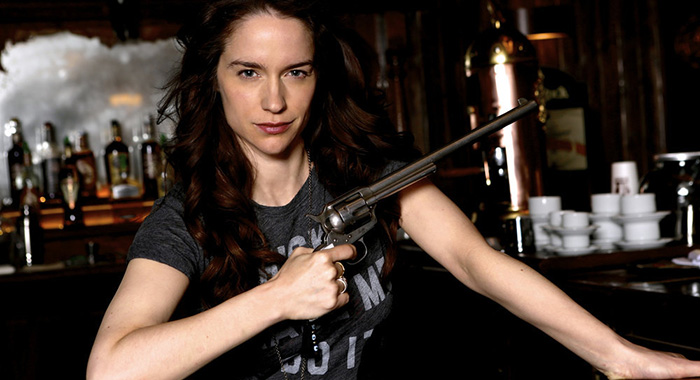 Born of a somewhat obscure 1990s Image Comics title, Wynonna Earp fills a niche so under-represented that its dedicated fanbase is now as much a part of the story as the chronicles of the title character. Returning to her hometown, Wynonna (Melanie Scrofano) discovers her legacy has a supernatural element and that her family is nothing like what she believed it to be. Playing loose, fast, and funny with language, mythology, and the heart, the show never shies away from its influences or weaving tension into its comedy. And as its cast grew and the world-building deepened, it did for horror tropes what DC’s Legends of Tomorrow does for the DC Comics milieu. The result is a seemingly light show with the power to devastate you when bad things happen to Wynonna’s band of good people. 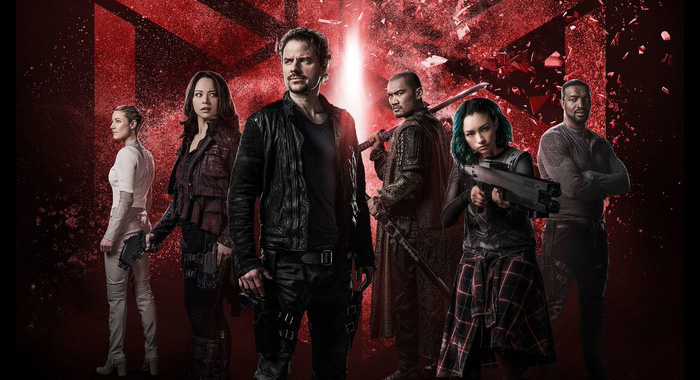 The scrappy crew of the Raza reflected the sensibility (and budget) of this three-season Syfy wonder. Based on a Dark Horse comic by the same name, it excelled at utilizing its few standing sets and completely obscuring its tight economic concerns while telling a tale of an emerging revolution. Like the best sci-fi ensembles, it tricks you into falling in love with the seemingly most immoral member of the crew while blindsiding you with the truth about the seemingly most virtuous. It also wore its Canadian-ness on its space-sleeves, which we appreciate in an era when most superhero shows are produced in Vancouver, but set in fictional US cities. Gone before its time, the program’s 39 episodes prove you can build science fiction/comic book show in the most modest of circumstances.