Initial reviews of Luca Guadagnino's remake describe an ambitious film that sets out to accomplish a lot and possibly doesn't entirely succeed.

Luca Guadagnino follows his most acclaimed movie, the Oscar darling Call Me By Your Name, with possibly his least appreciated, if the first reviews are any indication (currently teetering at 56% on the Tomatometer). In remaking Dario Argento’s horror classic Suspiria (92%), Guadagnino has delivered a divisive effort, though not one that’s black and white in terms of people loving or hating it. Suspiria is an ambitious production with plenty of moments worth experiencing, even for those who ultimately find the picture too pretentious as a whole.

Check out what the first round of critics are saying:

Less a remake of the original than it is an estranged sibling.
– David Ehrlich, IndieWire

Guadagnino has stripped down the original to its springs and reupholstered it into something utterly distinct from – and I believe superior to – Argento’s.
– Robbie Collin, Daily Telegraph

More muted in both palette and tone, opting for insidious weirdness over shock and gore… Only marginally more coherent than the original.
– David Rooney, Hollywood Reporter

Is there just too much plot this time?

This film’s attempt to make its supernatural horror story resonant to real-world themes and tragedies [is]… an insulting, opportunistic co-opting of history, which makes the film pretentious.
– Glenn Kenny, RogerEbert.com

The political backdrop is an extra layer of needless complication. Guadagnino is thinking too much and feeling too little.
– Stephanie Zacharek, Time

It kind of works… although I couldn’t shake the sense that the politics were nothing more than decoration here, a pretense sprinkled on by the director.
– Rory O’Connor, The Film Stage

But is it scary?

It holds your attention, and creeps you out at times, but it’s not scary… [Guadagnino] condescends to the horror genre by taking such elaborate pains to elevate it.
– Owen Gleiberman, Variety

Even if Suspiria is at times unpleasantly grim, it’s not exactly scary.
– Stephanie Zacharek, Time

Traditional horror fans won’t be pleased: Almost transgressively, Guadagnino has deprioritized the shocks, even the fear.
– Joshua Rothkopf, Time Out

What about that one scene everyone’s talking about?

[The] sequence is, quite simply, incredible, deriving its visceral impact from editing and practical effects so that, while it is stomach-churningly gory, it’s also beautiful.
– Jessica Kiang, The Playlist

Unbearably gruesome, violent… Some may not make it through that sequence.
– Emily Yoshida, New York Magazine/Vulture

And the grand finale?

Everything builds to a brilliantly over the top finale that becomes almost mesmeric with its use of color, music, movement and panting.
– John Bleasdale, CineVue

The last of its six acts goes for broke in a way rarely seen since the heyday of David Cronenberg: think Bausch (Pina) meets Bosch (Hieronymus), with extra giblets.
– Robbie Collin, Daily Telegraph

At long last, the payoff arrives: a scene so grotesque and insane it’s meant to be a catharsis.
– Owen Gleiberman, Variety

Will dance fans be impressed?

Pina Bausch by way of “What a Feeling!”
– Stephanie Zacharek, Time

“Volk” immediately ranks alongside “Goddess” in Showgirls and the fertility dance from Lost Horizon as one of the screen’s most unintentionally hilarious pieces of choreography.
– Alonso Duralde, The Wrap

The dancing in Suspiria, which is a major part of the movie, has so much snap and thrust and rhythm you might call it an art-conscious cousin of the pop choreography of Bob Fosse.
– Owen Gleiberman, Variety

How are the visuals in general?

Deliciously confusing to the eye: the images are gorgeous; what they are of is repellent, and one’s reaction is often off-balance, horrified, admiring laughter.
– Jessica Kiang, The Playlist

The fragmented nightmare montages of bad-acid-trip imagery — worms, evil faces, memories of domestic torture — are incredibly well executed, and I wish the movie had done more with them.
– Owen Gleiberman, Variety

Does Tilda Swinton save the day?

Swinton [is] at her other-worldly best.
– David Rooney, Hollywood Reporter

Tilda Swinton is a bit wasted; her character is anti-climactically written so that she delivers neither a payload of evil, nor a redemptive moral rescue, nor anything interesting in between.
– Peter Bradshaw, Guardian

Not even her powers are enough to reanimate the gray corpse of this Suspiria.
– Stephanie Zacharek, Time

Do any other performances stand out?

It’s tempting to say that Guadagnino treats [the actors] like furniture, but in one of his better movies, he would actually shoot the furniture in a meaningful way.
– Alonso Duralde, The Wrap

Dakota Johnson herself is very good — although oddly she is just not in the film as much as she could have been.
– Peter Bradshaw, Guardian

What about Thom Yorke’s score?

Thom Yorke’s soundtrack… sounds like someone crying at the bottom of a well: basically, ideal.
– Robbie Collin, Daily Telegraph

What’s the final word on this version of Suspiria?

It’s easily the classiest horror movie made in years, maybe ever.
– Joshua Rothkopf, Time Out

[It] has all the hallmarks of a cult classic.
– John Bleasdale, CineVue

It is a film of surfaces, admittedly, but one made by perhaps our era’s best director of surface.
– Rory O’Connor, The Film Stage

Film historians chronicling the death of auteurist cinema will cite Luca Guadagnino’s Suspiria as the point where this mode of moviemaking definitively entered its decadent stage.
– Glenn Kenny, RogerEbert.com

Suspiria premiered on Saturday at the Venice Film Festival, and it opens in limited release on Friday, October 26. Read all the reviews for it here. 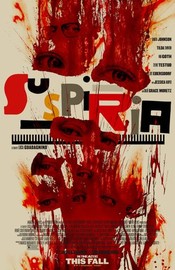