In honor of his passing, we look back at the films of the history-making Hollywood great. 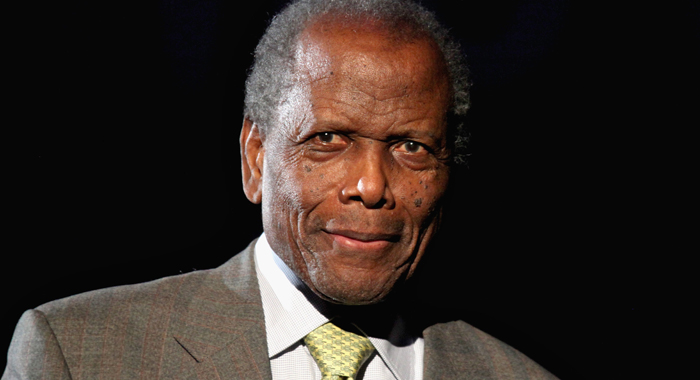 In honor of his passing, early today were are republishing a celebration article we released on his birthday back in 2019.  As one of the first African-American film stars, Poitier boasts a career littered with accolades, historical moments, and seminal performances too numerous count. As Hollywood tribute pour in for the incredible actor, we at RT thought it the perfect time to highlight just a few of our favorite performances from the iconic actor’s career. With 60-plus credits spanning over 60 years, it was a near-impossible feat, but here are our seven favorite Sidney Poitier performances. We encourage you all to re-visit (or enjoy one for the first time) over the weekend to celebrate the legendary actor’s memory. 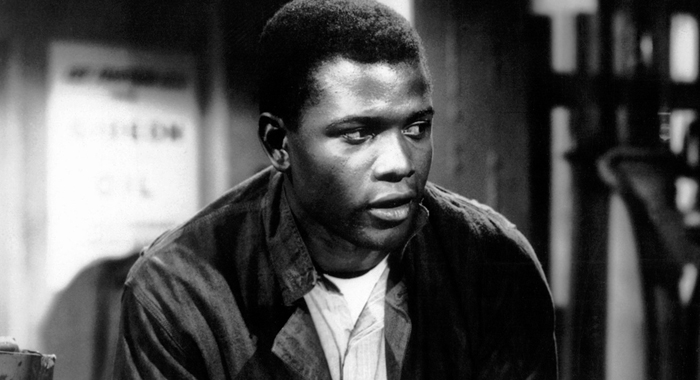 This was the role that put Poitier on the map. The struggles of educators and students are well documented in this violent and controversial film, based on Evan Hunter’s seminal novel about inner-city school conditions. Modern audiences might struggle to sympathize with the tactics employed by Poitier’s character, Gregory Miller, but the cultural impact his performance had on both society and education is undeniable. 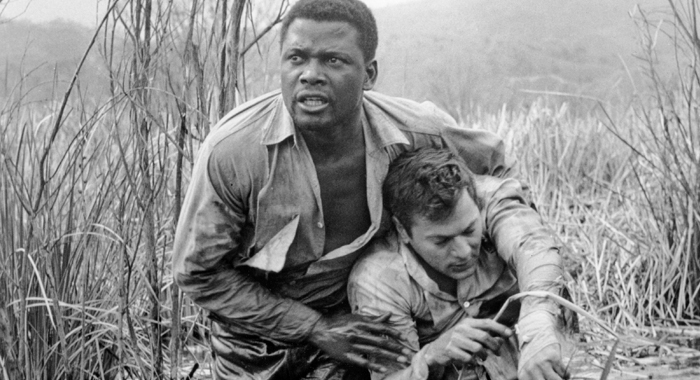 Poitier garnered his first Oscar Nomination for his portrayal of Noah Cullen, an escaped black convict shackled to white fellow escapee John “Joker” Jackson, played by Tony Curtis. Motivated to survive and escape, the foes are forced to work together and eventually come to respect one another. The conflict and eventual cooperation between the two men plays out against the backdrop of Jim Crow, underscoring the institutions of oppression that existed at the time that would have prevented their friendship from developing. The final scene of Noah defiantly singing to Joker remains a near-perfect ending to the prison break caper. 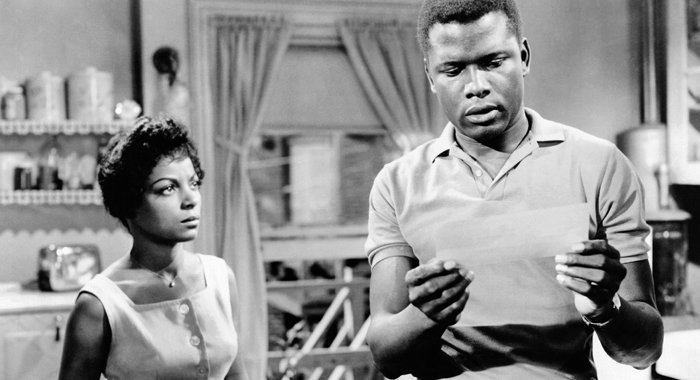 In the film adaptation of the eponymous stage play, Poitier plays Walter, the patriarch of the Youngers, a young black family living in 1950s Southside Chicago, trying to better themselves through family and a commitment to give their children a better life. Acting as a cinematic counterpoint to the idealized American dream, the Youngers struggle to combat institutions and individuals dead set on never allowing them to rise above. Walter is met with hostility and apprehension from those outside and from within his community as he strives to achieve, but through it all, he and his family persevere. 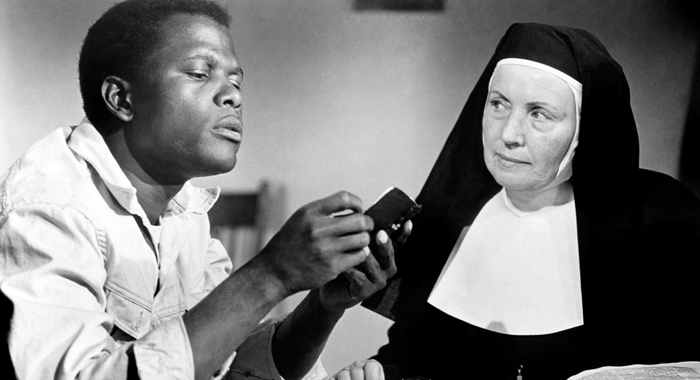 In this Oscar-winning role, Poitier plays Homer Smith, a traveling handyman who stumbles upon a group of German nuns. The nuns believe Homer was sent by God to help them build a chapel, and by the final frames, the audience is all but convinced of the same. Even Queen Oprah Winfrey found herself without words during her Golden Globe acceptance speech as she tried to explain what it was like watching Poitier win that Oscar. Instead, she opted to quote his line from the film and simply said, “Amen, amen, amen, amen.” To which, I say no one could have put it better. 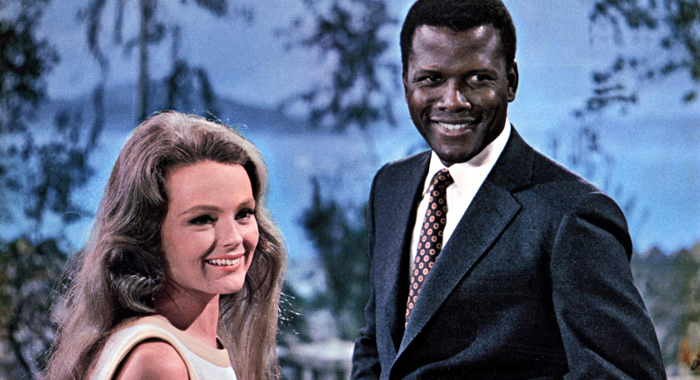 If the first role you most closely associate with Poitier is not In the Heat of the Night, the likely winner is Guess Who’s Coming to Dinner. Playing a black man meeting his white fiancée’s liberal and affluent parents, Guess Who’s Coming to Dinner was one of the first positive portrayals of interracial marriage to hit the big screen. Acting alongside Hollywood legends Spencer Tracey nd Kathleen Hepburn, Poitier made his mark on a verifiable American cinematic masterpiece. The influences and themes of Guess Who Coming to Dinner can be seen in several modern-day adaptations — Jordan Peele brilliantly subverted those themes for social commentary and comedic effect in Get Out. 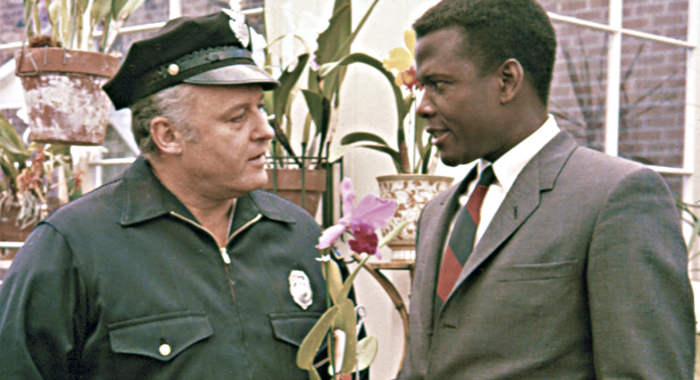 “They call me Mister Tibbs!” Poitier spoke those words in In the Heat of the Night, and both the film and the line have become synonymous with the actor’s career. Sitting at number 16 on the American Film Institute’s “100 Years… 100 Movie Quotes” list, the rebuke to racist Mississippi Police Chief Gillespie (Rod Steiger) is a thing of beauty. Playing Virgil Tibbs, a Pittsburgh detective charged with solving a homicide in the Deep South, Poitier navigates prejudice and incompetence to gain the respect of his would-be adversary. And with his help, the police attempt to solve the suspenseful, complicated whodunit. 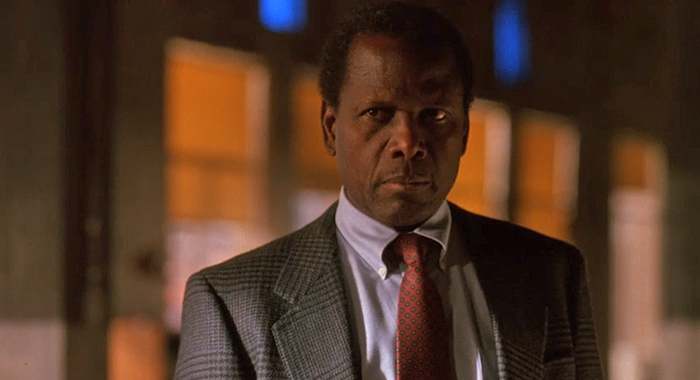 In a refreshing change of pace later in his career, Poitier starred in this ensemble suspense comedy. Robert Redford, Dan Aykroyd, David Strathairn, River Phoenix, and Poitier all play former spies working as security consultants. The crew inadvertently get caught up in a web of deception involving a former associate (Ben Kingsley) when they’re tasked with the high stakes retrieval of a very powerful piece of government equipment. Playing Donald Crease as an aging, more-than-over-it former CIA agent and the team’s voice of reason, Poitier showed us that he can be, in fact, quite hilarious. 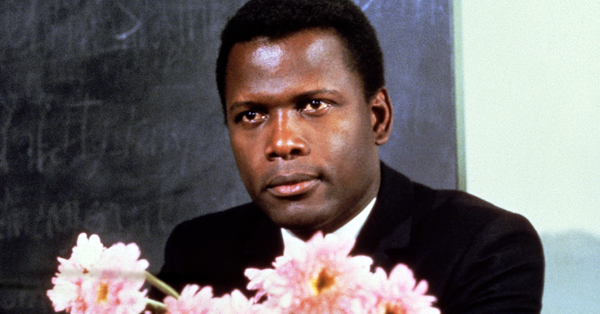