Cast members reveal that season 2 will feature a sequel to Fox sci-fi show's most controversial episode, "About a Girl." 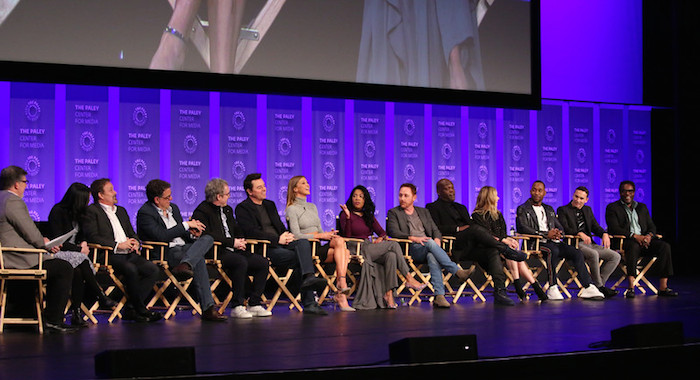 The Orville creator and star Seth MacFarlane addressed season 1 criticism around one of the series’ most controversial episodes, “About a Girl,” in a panel on Saturday at PaleyFest, an annual television celebration in Los Angeles. The cast of the Fox sci-fi show also briefed Rotten Tomatoes on season 2 before they took the stage.

Spoiler alert! This article contains plot details for many season 1 episodes of The Orville. 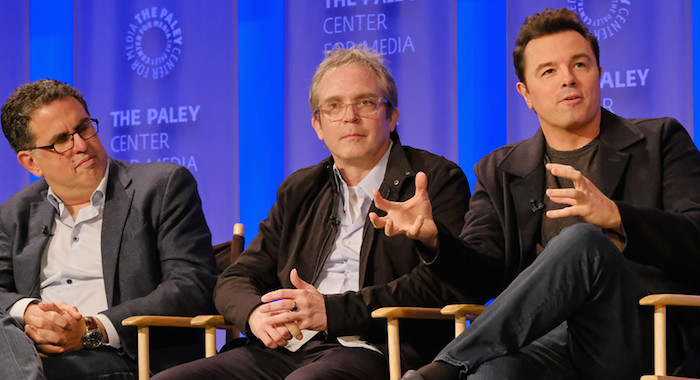 In the divisive episode, the ship’s Moclan couple Bortus (Peter Macon) and Klyden (Chad L. Coleman) have a baby girl, but since their species is all male, they debate giving her a gender reassignment.

The greatest divide for the show, however, has between critics and fans. The Orville’s first season has a 21% Tomatometer score, but a 93% Audience Score. MacFarlane recalled facing off against critics when the episode premiered.

“There was a lot of weird hostility about who do you think you are writing about this stuff?” MacFarlane said during the panel. “That’s what science fiction should do. The reaction from the fans was the opposite. They went, ‘Yeah, we’re game for any kind of story you want to tell us.’

“In this genre, there really should be nothing off limits,” he said. “Go all the way back to The Twilight Zone; there was nothing they wouldn’t talk about in their own way. I think the second you start closing off issues that are of the moment with regard to your storytelling, then you’re not doing your job.” 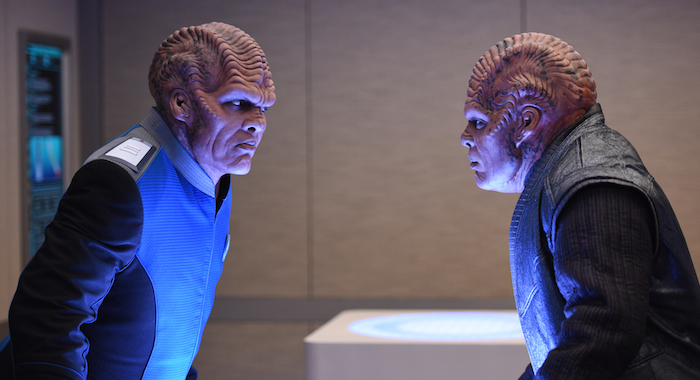 There will be a season 2 episode that follows up on the controversial episode and shows that Bortus still harbors feelings about his baby Topa’s gender reassignment.

“There was an episode that speaks directly to this whole gender reassignment deal and where he’s at with it that didn’t air, is going to air this year,” Coleman said about the new episode, which was was filmed during season 1. “It’s going to speak to the nature of our relationship.”

The episode is centered around another event, which Coleman wouldn’t spoil.

“There’s something we’re going to celebrate,” Coleman said. “There’s something that’s going to bring us closer together, but it’s push and pull. There’s tension there that has to be resolved. [Bortus’ feelings are] being suppressed in a particular behavior that I get wind of.” 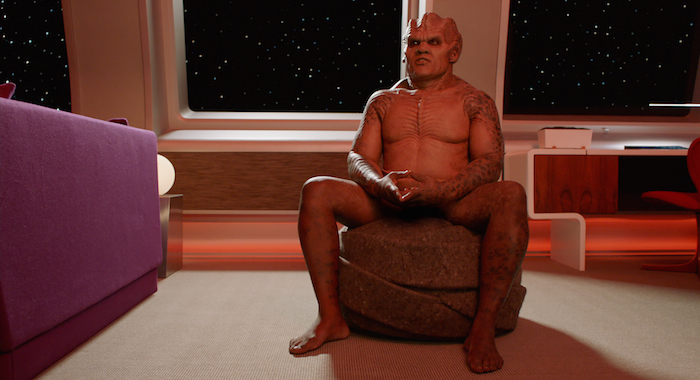 The Moclan family will continue to be the focus of stories in season 2. Months have passed since the season finale, but years in Moclan time.

“We grow fast,” Macon said. “When we see Bortus and Klyden and Topa again, you will have an idea of Moclan anatomy and what happens. So yeah, we’ll see some time has passed and because of what the child looks like, we will get some insight on how they grow and how Moclans are compared to human beings or other species.”

Coleman revealed that Topa is 8-years-old the next time we see him. This has Coleman curious to see what kind of father Klyden will be.

“I didn’t know [before beginning season 2 that] he was going to be eight, so I want to see what his world [is], who’s he engaging?” Coleman said. “I think once he goes to school and has to appropriate American culture and stuff, then as a father I’m going to be able to engage that.” 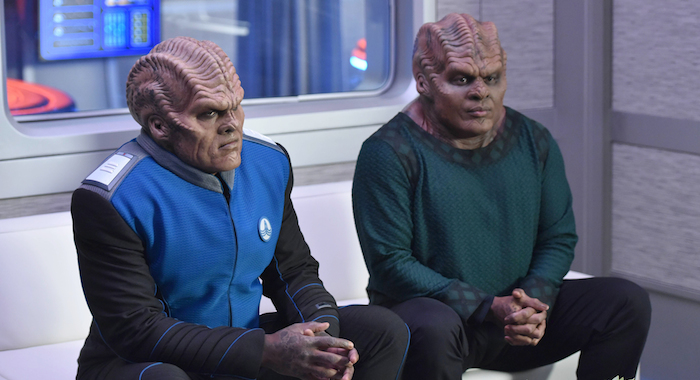 The question is: Will they tell Topa that he was born female? The answer may come from Klyden’s past.

“No, I don’t think we will ever tell him that,” Coleman said. “The question becomes when did I find out? They made the decision for me, and I don’t remember when I found out. I think you would wait until the child is firmly secure in who they are and where it’s not going to shake their foundation too much, but it’s a tricky proposition.”

Having his family aboard The Orville could also complicate Bortus’ job on the bridge.

“So if we get into perilous situations, in the back of my mind, my family is experiencing this as well,” Macon said. “So my newborn child and my mate, it’s a very interesting juxtaposition between the macro and the micro family, what the ship is doing in the charted worlds being macro. It’s a delicate balance.” 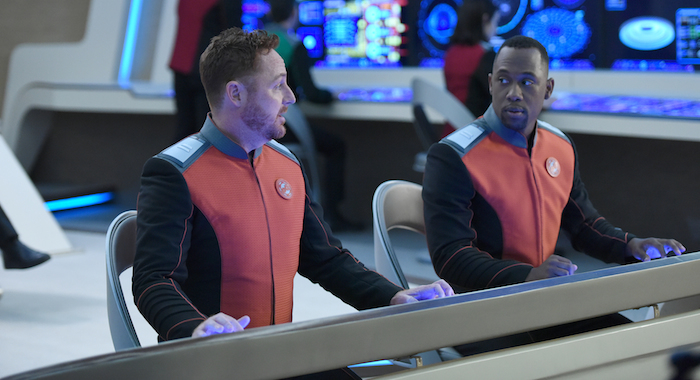 The season premiere of The Orville is going to include the entire crew, and won’t be science fiction at all.

“The first show was kind of about love, about relationships on board,” Scott Grimes, who plays Lt. Gordon Malloy, said. “Some of them fun, some of them a little deeper. We literally did an episode that was kind of all inclusive to the ship and not really science fiction, which I love doing. If you’re on a ship of 300 people, and it’s allowed to have relationships — obviously, Bortus and Klyden have a relationship right there — so of course stuff is going to happen, more so with some characters than the other characters.”

Macfarlane alluded to this episode during the panel too.

“There’s an episode in season 2 that actually does not contain a sci-fi plot,” MacFarlane said. “It’s just all character pieces. That’s, to me, the essence of what a good sci-fi show should be able to do. Your characters should be so strong that if you want to do a story that is just pure comedy, then you should be able to do that.” 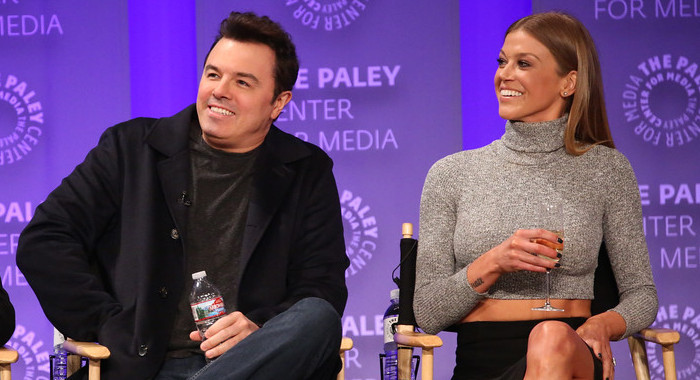 With alien species, the possibilities are endless.

“I think more and more [the show will deal with] the evolution of species, the crossover between different kinds of species on The Orville that delves into the race aspect of things,” Adrianne Palicki said. “There’s going to be more and more as we go along.”

Palicki plays first officer Kelly Grayson, Captain Ed Mercer (MacFarlane)’s ex. They were about to rekindle their relationship when Kelly decided the job had to come first. That’s not as simple a decision as it sounds.

“They’re kind of seeing how they’re going to deal with that ultimately,” Palicki said. “Will they or won’t they? It’s still going to be the question of the day. A few months passed, so there’s definitely been some time for things to sink in and settle, but seeing how two people deal with it very differently is going to be interesting.”

For Kelly too, knowing intellectually it’s better for the ship not to have a relationship with Ed, the heart wants what it wants.

“I think [she’s] still navigating her feelings with Ed, which I think is a push and pull,” Palicki said. “Doing the right thing is not the easiest thing sometimes. It’s not what you want so I think that’s going to be a little bit of a struggle for her.” 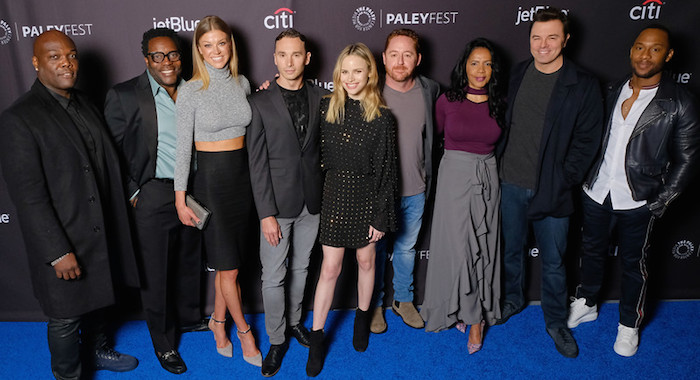 There will be new crew members complicating the crew dynamics.

“That’s going to cause some rift and you’re going to see how these two characters deal with it separately,” Palicki said.

Some of the existing crew will get closer too.

After her episode “Into the Fold,” in which Claire (Penny Johnson Jerald) is stranded on a planet with her children and Isaac (Mark Jackson), Jerald welcomes more action in season 2.

“Give me the action,” Jerald said. “I come from a place of fighters. My father was a fighter, a boxer, and Penny loves to box. So give it to me until my body won’t do it anymore. Bring it on.” 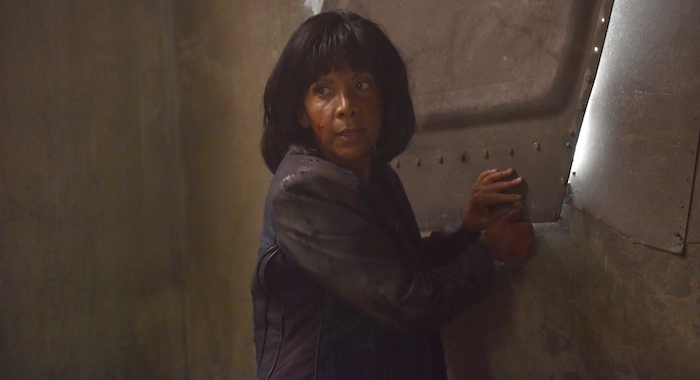 The crew of The Orville is a big family, said Halston Sage who plays Lt. Alara Kitan.

“Those relationships with Kelly and with Ed and the rest of the crew, really flourished in the first season,” Sage said. “I think in the second season you get to see them really come together and act as that second family.”

Given MacFarlane’s history with Family Guy and the Ted movies, critics and audiences at first expected The Orville to be a spoof of sci-fi shows. The TV spots full of one-liners didn’t help. On the panel, MacFarlane spoke about how he decides which episodes should lean more comedic and which should be dramatic.

“The tone should be dictated by what the story is,” MacFarlane said. “When you’re telling a story like the Rob Lowe episode, you can keep it kind of light. If you’re telling a story like the episode with Bortus’s baby, a joke will detract from the story. That’s what delighted us the most about the reactions. People were there for the show in each individual episode. They’re not pressuring you to keep this tone generic all the time.”

The Orville returns this fall on Fox.