Preacher Season 3 Set To Tackle Most Controversial Storyline Yet, Say Showrunner and Cast

And if you don't like it, "there are loads of other things you could watch, like ... the f---ing British Bake Off."

If season 2 of Preacher shocked your delicate sensibilities, get ready to be offended all over again when the AMC supernatural series returns on Sunday, June 24. Season 3 offers even more controversial storylines, and Jesse Custer (Dominic Cooper) continues his journey to find God and kick his ass.

Last year, the depiction of Adolf Hitler (Noah Taylor) led to certain quarters calling for the heads of executive producers Seth Rogen and Evan Goldberg. This time, the series could court its most controversial story yet with the arrival of The Grail’s Allfather D’Aronique (Jonny Coyne) and his attempt to install the simpleton descendant of Christ known as Humperdoo (Tyson Ritter) as the new Messiah.

“If you’re a fan of the comic, you’re not going to think that we pulled the punches on the Allfather. You’re going to be like, ‘how the f— did they think of this sh–?’” Rogen said during a recent press conference. “The answer is [original author] Garth Ennis’s demented mind thought of it, and we’re just bringing it to film.”

The storyline comes directly from the comics, including the controversial notion of Humperdoo’s heredity, which may have a divine source. About the possibility of another protest, Rogen said, “We reached a pretty good crescendo [last year], but I can promise that the Allfather is intense and [the story is] crazy.”

Executive producer and showrunner Sam Catlin was somewhat more tentative in a conversation with Rotten Tomatoes: “It’s hard for me to predict. We’re certainly not shying away from doing the Preacher thing that we like to do — which is basically just to blow things up both figuratively and literally.”

Cooper understands that the show has to be careful in its depiction of violence, but said its more satirical ideas need to be explosive.

“This show has to be offensive. It has to be. It has to go to extremes. When people do get offended by it, it does exactly what it kind of sets out to do,” Cooper said. “In terms of storytelling, it’s fun, and sometimes morose, sometimes the stupid, sometimes the extreme, but also mixed with the serious element. As long as it raises questions and makes people talk, and gives you something to talk about in the framework of something extraordinarily fun and entertaining, then I think that makes [the controversies] something clever.”

Joseph Gilgun, who plays wild Irish vampire Cassidy, had a more succinct point of view: “I think people need to accept that this is Preacher and that’s where it’s gonna go,” Gilgun said, noting that those who find the show troubling could just walk away from it. “There are loads of other things you could watch, like watch the f—ing British Bake Off. That’s pleasant.”

“We’re not gonna convert people who hate it, are we?” added Ruth Negga, who is revived in the role of brash gun enthusiast Tulip O’Hare. “I don’t think we’re gonna do that. If we did, we wouldn’t be Preacher, you know?”

For Betty Buckley, who joins the series this year as Jesse’s Gran’ma, Madame Marie L’Angelle, a little controversy is good for the soul.

“[Preacher] takes these icons in people’s minds and psyches and turns them upside down,” Buckley said. “It really challenges you, and in the process, it makes you laugh and then it makes you scream. I think that’s great because it’s really getting in to your primal psyche and asking you to really examine what you believe.” 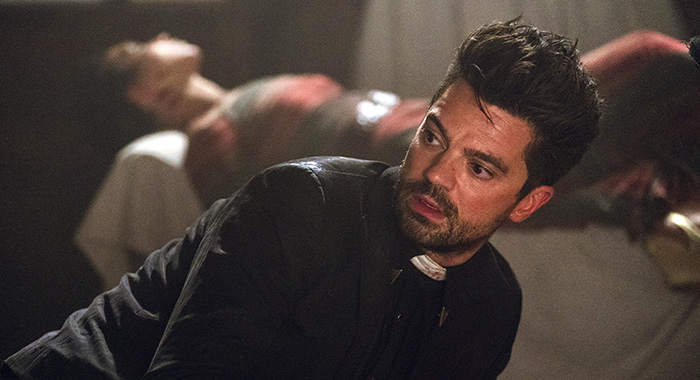 Before Jesse really faces the threat of the Allfather and his idiot Messiah, he must first contend with Madame L’Angelle’s powerful influence upon returning home to the Angelville plantations. She is a spiritist who can raise the dead and practitioner of very alternative medicine, but her business crumbled after Jesse ran away. And she uses Jesse’s desperation to save Tulip – who was shot and killed at the end of last season – to exert her influence on him once more.

The character was more of a caricature in the comics written by Ennis and illustrated by the late Steve Dillon, but Buckley noted her version of Madame L’Angelle has “more human complexity,” as 10 hours of television offers more room to explore the character than six issues of a comic book.

“When it’s in the comics, you really just only live with these characters for short stretches,” Catlin said. “[You] don’t have time to build a character with contradictions or nuance. It’s just, ‘Oh sh–! This is the evil woman with the low-hanging boobs that put Jesse in a coffin!’”

That more comedic angle was a revelation in the lightning-fast pace of the comic book, but Catlin felt he had to approach Gran’ma differently to understand “the psychological hold that this woman has on [Jesse].”

Both Buckley and Catlin agreed Madame L’Angelle loves Jesse, but it comes from a very abusive and creepy place Buckley recognized as a “sad phenomenon” that probably reflects Marie’s own upbringing.

Cooper said some of her actions in the first episodes will look like hatred and resentment, but the viewer will discover “she’s relieved at his return” even if it is mixed with her delight in controlling him. “She’s never prepared to let that go ever again I think,” he added.

And while everyone agreed Madam L’Angelle loves Jesse in her ugly, abusive way, Jessie’s feelings toward her are harder to describe. Catlin called it a form of Stockholm Syndrome and a “great respect” for her despite her involvement in the death of his parents: “That is something we thought was sort of gothic and creepy and really f—ed up, when you sort of develop a dependency on your torturer.”

That created a fascinating tension for the writers to explore.

Madame L’Angelle is the one person Jesse knew could save Tulip, which leads to a “complex situation” as he faces familiar patterns being back home and a growing need to avenge his parents.

“She’s the only family he has,” Cooper noted. “To be thrust back into a place with your biggest enemy. You sort of reflect and go, Right, and what would doing this achieve? Besides just attacking them, or create a harm toward them? Would that make me feel any better? Probably not.”

At the same time, the actor admitted “if you just held on to all that bile, it’d explode.”

Considering Preacher, it is entirely possible an explosion of bile will happen eventually.

Angelville’s strict “No Vampires” policy means Cassidy will be setting out on a little adventure of his own with a vampire group known as “L’Enfants du Sang,” based on fan-favorite storyline from the comics. Executive producer Evan Goldberg said its TV adaptation will be a “bizarrely hilarious and incredibly crazy” story.

Gilgun said he was “very lucky” to get that story, which partners him up with actor Adam Croasdell as an aristocratic 350-year-old vampire called Eccarius.

“It set the bench really high for me,” Gilgun said. “I’m having such a good time playing it, I just hope I’ve not f—ed it up.”

With Cassidy on his own, Negga said she missed Gilgun’s presence on set, even as it reflected the growing emotional distance between Tulip and Cassidy as characters.

“I think that Tulip experiences this guilt not being able to love Cassidy the way that he loves her,” she explained.

Once he leaves Angelville, Tulip will experience feelings of loss, a “guilt about maybe not being able to be there for him,” Negga revealed, and even jealousy when “his spotlight is now put on other people.”

“In a heartbreaking way, Cassidy and Tulip will have to separate because of Cassidy’s feelings for her and the knowledge that there’s not reciprocation in entirely the same way,” she said. “It means that they kind of have to leave one another for a bit.”

She also highlighted a scene in which Tulip and Cassidy talk on the phone. While most productions would shoot either side of the call on separate days with a script supervisor reading the lines of the actor not present, Negga said the production arranged for the call to be filmed live across the separate soundstages used for Angelville and New Orleans. Though still in different spaces, the two actors were able to play the scene together.

“I suppose that really sums up the sort of feeling for the pair of them,” she said. “They’re inhabiting the same world, but, like, orbiting one another, never really coming into contact.”

Tulip will face a different sort of contact when God starts bugging her about a possible assignment.

“It’s quite clear early on that he’s got his own machinations devised purely to use Tulip as this sort of pawn in deflecting Jessie’s attention,” she said. “The thing is, God underestimates Tulip.”

She also teased that their final meeting of the year will be a “reckoning.”

That defiance in the face of God reflects a certain change for Tulip, something Negga said is part of an equal footing the characters reach this year.

“Tulip isn’t disabled by this PTSD stuff, and Cassidy is sort of venturing out on his own,” she explained. “I just think they become more independent this year, independent of one another; but not necessarily in a bad way. They’re not all on one man’s quest. They’re not trailing Jesse.”

Cooper said of his character: “I still find him very hard to unravel. I haven’t got to the bottom of him yet. I just feel like I’ve just started to expose a few layers of what he can do and be.”

“It just comes out and it’s quite shocking,” he said. “Ultimately, [the reason] he’s capable of harnessing and holding onto [the power of Genesis] within him is because he is half good and half evil. And I love how much further we can go with that.”