Pet Sematary First Reviews: One of the Best Stephen King Adaptations Ever

Critics so far say the new adaptation is chilling, full of surprises, and bolstered by a standout performance from a young breakout star.

We may have proof that most remakes suck, but that’s not the case for all of them, and the new adaptation of Pet Sematary appears to be a significant exception. According to the first wave of reviews following its SXSW premiere on Saturday, March 16, the horror movie is not just an improvement on the previous 1989 version but another great Stephen King-based flick to further the wave of his recent popularity. Pet Sematary offers some major differences that King die-hards might not appreciate, but between the dramatic core of the scares and the stand-out performances, this one seems to have been well worth another effort.

Here’s what the critics are saying about Pet Sematary:

How does this one stack up against other Stephen King adaptations?

One of the best Stephen King adaptations in the past decade.
– Monica Castillo, The Wrap

Not merely a solid entry to the long list of films based on King’s work; it joins the ones sitting at the top as one of the very best.
– Perri Nemiroff, Collider

Pet Sematary is one of the best Stephen King adaptations ever.
– Chris Evangelista, Slashfilm

A bloodless bastardization of its source material that sinks under its own uninspired storytelling and horror movie cliches.
– Bryan Rolli, The Daily Dot

How does it compare to the 1989 version?

The new Pet Sematary pushes the envelope, and then some, going further than King even dared. The fact that this is a studio film is both surprising, and thrilling.
– Chris Evangelista, Slashfilm

This Pet Sematary is more effective than the previous adaptation, at least until the climax.
– Britt Hayes, IndieWire

They’re not doing nearly enough to distinguish this version from the one that came before.
– Peter Debruge, Variety

Are there any new surprises?

Everything you thought you knew about this familiar tale will be used against you in the most invigorating, and chilling ways.
– Meagan Navarro, Bloody Disgusting

We may think we know where this story is going, but Pet Sematary has plenty of shocking tricks up its sleeve. The end result is a film somehow darker than the book itself.
– Chris Evangelista, Slashfilm

The filmmakers have also tweaked the humor to reflect our new post-The Conjuring sensibility, where audiences can be sure that the characters know when they’re making bad ideas.
– Peter Debruge, Variety

How gory is it?

The movie is relatively on the bloody side of horror.
– Monica Castillo, The Wrap

There’s a lot more blood and viscera this time around.
– Dan Caffrey, Consequence of Sound

Horror fans will be thrilled by the sparse yet unsettling gore.
– Jonathan Barkan, Dread Central

This Zelda is may be different, and yet she’s so extremely scary in her own right. Seriously. It’s so impressively scary.
– Meagan Navarro, Bloody Disgusting

While topping the malicious distortion of Andrew Hubatsek [in the original] was always going to be a tall order, Alyssa Brooke Levine makes the role her own, thankfully with the help of prosthetics rather than CGI.
– Dan Caffrey, Consequence of Sound

Those scenes are leaps and bounds better than they were in Lambert’s version.
– Britt Hayes, IndieWire

Zelda plays a far more prominent role in this film and goddamn is she scary.
– Jonathan Barkan, Dread Central

How different is the ending?

The macabre poignance of the first two-thirds of the film swiftly devolves into silliness, ending on a note… that feels more like a punchline than a gut punch.
– Britt Hayes, IndieWire

The final act is so absolutely off the rails bonkers that it’s amazing that a big studio release ever let it pass. It’s freaking twisted.
– Meagan Navarro, Bloody Disgusting

The change results in a wilder and — honest to God — way more fun climax.
– Dan Caffrey, Consequence of Sound

The film’s breakout star is Jeté Laurence, whose scary-good performance as the sweet and naturally curious 8-year-old Ellie recasts what could have been a silly part into something that’s genuinely creepy and heartbreaking.
– Monica Castillo, The Wrap

The real standout is young actress Laurence, as Ellie… it’s a treat to watch her descend into darkness.
– Chris Evangelista, Slashfilm

The range the role requires is extensive to say the least, and Laurence works the entire spectrum from sweet and curious to true terror brilliantly.
– Perri Nemiroff, Collider

Laurence plays the demented side of her character well, even if that character is just a B-rate composite of living dead girl tropes from The Ring and The Exorcist.
– Bryan Rolli, The Daily Dot

[Amy] Seimetz outshines [Jason] Clarke as the spouse grappling with the very concept of death… Rachel Creed is the one we nearly wish was the focal point of the film.
– Meagan Navarro, Bloody Disgusting

The cats that played Church are evidence that animals deserve an Academy Award category of their own.
– Jonathan Barkan, Dread Central

Is there greater substance here than in your average horror flick?

The directing duo confront grief and guilt in a manner that resonates deeply…to deliver an unnerving exploration of death and its emotional effects.
– Britt Hayes, IndieWire

Its terrifying story about death still leaves audiences with much to think about long after the credits roll.
– Monica Castillo, The Wrap

Jeff Buhler’s screenplay excels on so many levels… it’s a layered, deeply sinister family nightmare that, yes, is packed with scares, but also a significant amount of complexity that takes those scares well beyond fleeting thrills.
– Perri Nemiroff, Collider

Does the movie have any major issues?

The movie’s first two acts feel quite rushed… then there are moments of cheap CGI that destroy the atmosphere for the duration it is on screen.
– Bobby LePire, Film Threat

The problem with Pet Sematary is that it gives viewers absolutely no reason to care about anything that happens to the Creed family.
– Bryan Rolli, The Daily Dot

The script is practically all plot, all the time, which is plenty efficient for those simply looking to be scared but a little anemic when it comes to making audiences care about these people.
– Peter Debruge, Variety

The film soon makes this reanimated loved one more monstrous than unsettling, possessed of unlikely strength and a little too similar to the growling monster-people found in garden-variety horror films.
– John DeFore, Hollywood Reporter

Anyone expecting the new Pet Sematary to play by the same rules is going to be both shocked, and maybe disappointed.
– Chris Evangelista, Slashfilm 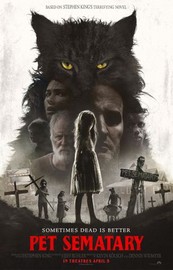