Paddington 3 Is Officially in the Works, and More Movie News

Daniel Kaluuya may reunite with Jordan Peele, Ari Aster recruits Joaquin Phoenix, Regina King signs on to play a political icon, and Paramount wants to remake The King and I.

This week’s Ketchup brings you more headlines from the world of film development news, covering such titles as The King & I, Paranormal Activity 7, and the Train to Busan remake.

PADDINGTON 3 IS IN THE WORKS 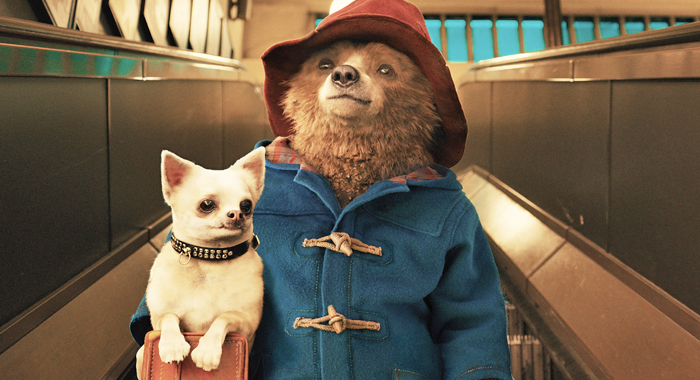 Following a year devastated by the COVID-19 pandemic, we all received a sign of optimism coming soon this week with the confirmation that the sequel Paddington 3 is indeed officially in the works. Adapted from the children’s literature character that first appeared in the 1958 book A Bear Called Paddington, the 2014 film Paddington received a Certified Fresh score of 97% and its 2017 sequel Paddington 2 still holds the record as the film with the most reviews to be Certified Fresh at 100% on the Tomatometer. Paul King, who wrote and directed the first two films, has said that he would not be directing a Paddington 3 if one was to ever happen, and we already know that King’s next film will be the Charlie and the Chocolate Factory prequel Wonka for St. Patrick’s Day, 2023. Combined, the two Paddington movies earned over $500 million worldwide ($280 million and $225 million). No casting announcements for Paddington 3 have been made yet, but the film franchise’s ensemble cast (not counting film-specific antagonists) includes Hugh Bonneville, Sally Hawkins, Jim Broadbent, Julie Walters, and the voices of Ben Whishaw (Paddington) and Imelda Staunton (Paddington’s Aunt Lucy).

1. DANIEL KALUUYA IN TALKS FOR REUNION WITH JORDAN PEELE

To date, Jordan Peele has only directed two feature films, but both Get Out (Certified Fresh at 98%) and Us (Certified Fresh at 93%) have been box office hits, with each coincidentally earning $255 million worldwide. Expectations are high, then for his untitled third film, which Universal Pictures is helping by calling it a “horror event title” scheduled for July 22, 2022. Jordan Peele is now getting his cast for that film together this week, with singer and actress Keke Palmer (Akeelah and the Bee, Certified Fresh at 85%) being the first to officially be confirmed. Peele’s Get Out star Daniel Kaluuya is also in talks for one of the film’s leads, but his deal hasn’t yet been finalized. Similarly, Fargo and Game Night star Jesse Plemons was also in talks for a role recently, but his deal fell apart due to a scheduling conflict (possibly because he also signed with Apple TV+ this week to star in Martin Scorsese’s Killers of the Flower Moon).

2. JOAQUIN PHOENIX TO STAR IN ARI ASTER’S NEXT FILM

Jordan Peele isn’t the only director who’s recently had two critical hits with his first two horror films, as Ari Aster pulled off a similar feat with Hereditary (Certified Fresh at 89%) and Midsommar (Certified Fresh at 83%). For his third film, Aster has recruited four-time Academy Award nominee and recent winner of the Academy Award for Best Actor Joaquin Phoenix to star in a film called Disappointment Blvd. The exact genre for the A24 production is unclear, as the premise is described as “an intimate, decades-spanning portrait of one of the most successful entrepreneurs of all time,” which doesn’t sound like a horror film, but this report describes the film as a “surrealist horror film set in an alterate present.” Joaquin Phoenix is expected to film Disappointment Blvd sometime later this year before moving on to star as Napoleon Bonaparte in Ridley Scott’s Kitbag.

3. NEW SUPERGIRL TO MAKE HER DEBUT IN THE FLASH

It’s been 37 years since Helen Slater starred in the famously terrible Supergirl (Rotten at 9%), and in that time, Melissa Benoist has gone a long way toward making amends in the popular CW series Supergirl. That said, we’re due to get yet another iteration of the character in the upcoming DCEU film The Flash. After director Andy Muschietti (Mama, IT) reportedly saw the auditions of over 425 actresses, the role of Supergirl in The Flash (11/4/2022) has gone to relative unknown Sasha Calle, who currently co-stars in the daytime soap opera The Young and the Restless. The 25-year-old Boston-born Colombian actress will also have the distinction of being the first Latina actress to portray Supergirl in any format (TV, animation, etc). The other 400+ actresses reportedly did not know what role they were auditioning for until very late in the process, at which point Sasha Calle had a chemistry reading with The Flash star Ezra Miller (over Zoom). It’s not yet known in which other future DCEU films Calle might reprise her role as Supergirl. In related news, Marwan Kenzari, who co-starred as Jafar in Aladdin, has also joined the DCEU film Black Adam in an unknown role.

4. PARAMOUNT TO REMAKE CLASSIC MUSICAL THE KING AND I

In recent weeks, we’ve heard about new efforts to remake both Breaklast at Tiffany’s and The Wizard of Oz, and this week, we can add another classic from over 50 years ago to the list. There have been multiple adaptations of the Rodgers and Hammerstein musical The King and I, or the true story that inspired it, but the most famous is the 1956 film starring Yul Brynner and Deborah Kerr. That film was produced and distributed by 20th Century Fox, but the remake rights have now landed at Paramount Pictures, which is partnering with Temple Hill, the production company behind recent movies like Love, Simon (Certified Fresh at 91%) and Happiest Season (Certified Fresh at 83%). The 1956 version of The King & I received nine Academy Award nominations and won five: Best Actor (Yul Brynner), Best Color Art Direction, Best Color Costume Design, Best Score, and Best Sound Recording. The film was also nominated for Best Picture, but lost that year to Around the World in 80 Days. No writer or director is attached to the remake of The King and I yet, but Paramount is reportedly “hoping to bring a contemporary perspective to the project and incorporate diversity and contrasting worldviews by incorporating real history and the musical into it.”

5. PARANORMAL ACTIVITY TO BE REBOOTED BY HAPPY DEATH DAY SCREENWRITER

As of 2021, it has now been six years since the sixth film in the Paranormal Activity horror franchise (Paranormal Activity: The Ghost Dimension, Rotten at 14%) was released in 2015. Paramount Pictures has been developing a seventh Paranormal Activity film since 2019, which has included scheduling it first for March 19, 2021, and then most likely delayed by COVID-19 for next year on March 4, 2022. As of this week, we now know that the seventh film will itself be a remake and/or reimagining described as an “unexpected retooling” of the franchise. Whatever form the seventh Paranormal Activity takes (such as, for example, whether it will still be a “found footage” film), the retooling will be directed by Will Eubank, whose previous work includes 2014’s The Signal (Fresh at 60%) and last year’s Underwater (Rotten at 47%). Eubank will be working from a screenplay by Christopher Landon, who directed Happy Death Day (Fresh at 71%), and wrote and directed both Happy Death Day 2U (Fresh at 71%) and Freaky (Certified Fresh at 83%), all of which put a unique spin on various horror or science fiction tropes.

In 1972, U.S. Representative Shirley Chisholm became the first African-American to be a candidate for a major party’s presidential nomination; she was recently portrayed by Uzo Aduba in the TV mini-series Mrs. America, but she also made movie news in November when Danai Gurira signed on to star in a biopic called The Fighting Shirley Chisholm. As it turns out, that’s not the only Shirley Chisholm film in the works, as Regina King, who recently won her fourth Emmy for her work in HBO’s Watchmen and her first Oscar for her role in Barry Jenkins’ If Beale Street Could Talk, and who also recently directed the historical drama One Night in Miami (Certified Fresh at 98%), which has been in awards conversations this year, is attached to another. King is officially attached to star as Chisholm in a biopic called Shirley (not to be confused with this biopic called Shirley) to be directed by John Ridley, who has experience in the genre as director of the 2013 Jimi Hendrix biopic Jimi: All Is by My Side.

7. ARE YOU THERE, GOD? IT’S THE ORIGINAL CASSIE FROM ANT-MAN

Last year marked the 50th anniversary of the first publication of the coming-of-age novel Are You There, God? It’s Me, Margaret by children’s literature author Judy Blume. Although there are certain details that haven’t aged particularly well, the book remains an important landmark in coming-of-age fiction, despite never being adapted as a motion picture, but that’s about to change. Abby Ryder Fortson, who was the original actress to play Scott Lang’s daughter Cassie in the first two Ant-Man movies, has been cast as the title character Margaret, and Rachel McAdams has been cast as her mother. Are You There, God? It’s Me, Margaret will be written and directed by Kelly Fremon Craig (The Edge of Seventeen, Certified Fresh at 94%) for Lionsgate and producer James L. Brooks. Lionsgate and Brooks reportedly won the right to adapt Judy Blume’s novel after traveling to Florida to meet with Blume in a conference room that had been transformed into an 11-year-old girl’s bedroom with “pictures of executives as 11-year olds.”

Last year’s Academy Award Best Picture win for Parasite (Certified Fresh at 98%) shone a new light on the South Korean film industry, but the country’s film output is broad and includes many genres. For example, the 2015 zombie movie Train to Busan (Certified Fresh at 94%) was an international hit, and it received a sequel last year called Train to Busan Presents: Peninsula (Rotten at 53%). The title tells you exactly what the movie’s hook is, as it centers on the passengers of a train who find themselves surrounded by a zombie apocalypse. Back in 2018, New Line Cinema announced an English-language remake of the film with James Wan on board as producer, but this week we learned that the film finally has its director in the form of Timo Tjahjanto (The Night Comes for Us, Fresh at 91%), who is now in talks for the job. The English-language screenplay was adapted by Gary Dauberman, who has written several films for Wan’s Conjuring Universe and who is also preparing to direct a remake of Stephen King’s vampire story, ‘Salem’s Lot.

The world is still waiting on the sci-fi thriller Chaos Walking (3/5/2021) several years after Daisy Ridley was announced to star alongside Tom Holland, but this week, we learned about another new film for the former Star Wars franchise star. Ridley is now attached to star in the film adaptation of the psychological thriller novel The Marsh King’s Daughter by author Karen Dionne. Ridley will play a woman who was kept hostage in a remote wilderness with her mother by her father, an infamous criminal called “The Marsh King.” The Marsh King’s Daughter will be directed by Neil Burger, whose recent films have included the remake The Upside (Rotten at 42%), as well as all three films of the Divergent (Rotten at 41%) franchise.