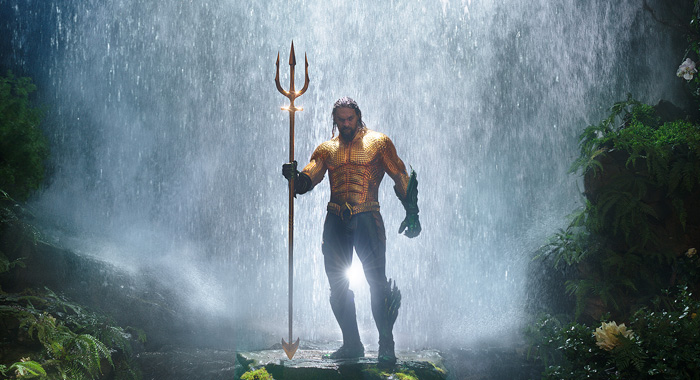 Though better known for its cosplay and comic book ties, New York Comic Con has become as important a place to debut new trailers as Comic-Con International: San Diego. And considering the stable of properties showing off new material over the weekend, the two conventions may be equal in their media blitzes.

Besides the Wednesday night teases of DC Universe’s Titans and Harley Quinn, fans are already eagerly anticipating previews for shows like Marvel’s Daredevil, Good Omens, The Tick, The Boys, American Gods, and more. On the movie front, 2019’s Hellboy will be the trailer to beat. Not that possible trailer for Mortal Engines and How To Train Your Dragon: The Hidden World won’t try. We’ll keep adding trailers as they appear and New York Comic Con continues.

Coming to DC Universe on October 12.

Matt Murdoch (Charlie Cox) may no longer have any interest in being Matt Murdoch, but someone else has an interest in being Daredevil. Will the imposter get in Matt’s way as he tries to assemble the guts to finally finish Wilson Fisk (Vincent D’Onofrio)? Back in black, the Devil of Hell’s Kitchen may discover his greatest foe is himself.

Or his greatest foe may be FBI Agent Benjamin Poindexter (Wilson Bethel), a character featured in the above second trailer for the season. Based on legendary Daredevil nemesis Bullseye, Dex appears to be the man Fisk finds to wear the Daredevil armor. But will the Kingpin’s plan lead to something — and someone — worse than Daredevil?

Returns to Netflix on October 19.

Harry Potter veterans Natalia Tena and Tom Felton star in a science fiction series about a group of strangers stranded on a spacecraft bound for a distant planet. As the passengers learn to cooperate, they discover one of them may not be human.

Harley Quinn (voiced by Big Bang Theory‘s Kaley Cuoco) is getting out of jail and her habit with the Joker. She intends to become the Queen of Crime throughout Gotham, but based on this tease, she also wants to have some fun. Not that Batman or Poison Ivy seem too interested in that.

Stan (John C. McGinley) and Evie (Janet Varney) are back in Willard’s Mill dealing with the consequences of Stan’s time-travelling to save his dead wife Claire. In doing so, he inadvertently opened a portal between the Land of the Living and the Land of the Dead – allowing evil forces to truly take over the town and even some of its inhabitants. Although always the skeptic at first, Stan must work with Evie to once more save the town – even if it means making a literal deal with the devil.

Adora (Aimee Carrero), a cadet with the Evil Horde, comes into contact with one of the swords of Grayskull and becomes She-Ra, the Princess of Power. Soon, she joins a rebellion against the Horde. As others join the rebellion, Adora comes into conflict with her friend Catra (AJ Michalka) as both learn the truth about the Horde and themselves.

Debuts on Netflix on November 16.

As part of a complicated plan to restore magic, Dean Fogg (Rick Worthy) negotiated the lives of his students, erasing their memories and giving each – except Alice (Olivia Taylor Dudley) who is now imprisoned by the Library – a new, magic-free identity. Even with their new identities, the others are far from safe since inside Castle Blackspire, an ancient, powerful and unkillable Monster escaped confinement and jumped bodies to a new host, Eliot (Hale Appleman). Will the Monster find what he seeks?

Jason Momoa stars as Arthur Curry, a man caught up in the conflict between Atlantis and the Surface World. When Mera (Amber Heard) comes to to him to prevent his half-brother Orm (Patrick Wilson) from taking the throne and starting a war, they go on a journey which may finally see Arthur accepting his destiny as the King of the Oceans.

On the eve of D-Day, a group of American paratroopers find their mission to destroy a German radio tower near Normandy means battling as series horrifying, bloody, and violent creatures that are the result of a secret Nazi experiment. J. J. Abrams serves as a producer, which means the film, which features Bokeem Woodbine and Iain De Caestecker, may be happening in the Cloverfield universe.

The Paladins face their final challenge as Voltron heads back into space to prevent a final conflict between the Galra and, well, everybody. But as the Witch Haggar (Cree Summer) suggests in the teaser, it may already be too late.

Returns to Netflix on December 14.

In a world where cities are mobile machines bent on devouring smaller villages, Hera Hilmar star as Hester Shaw, a woman looking to get revenge on Thaddeus Valentine (Hugo Weaving), a powerful man she blames for her mother’s murder. Unfortunately, she also run into Tom (Robert Sheehan), a Londoner hoping to see more the world. Both soon find themselves ejected from the city; which means Tom will get his wish, after a fashion.

In 2093, the crew of the Nightflyer, the most advanced ship ever built, embark on a journey to find other life forms. Their mission takes them to the edge of the solar system, and to the edge of insanity, as they realize true horror isn’t waiting for them in outer space — it’s already on their ship. Starring Eoin Macken, David Ajala, Sam Strike, Maya Eshet, Angus Sampson, Jodie Turner-Smith with Brian F. O’Byrne and Gretchen Mol.

Shadow Moon’s (Ricky Whittle) journeys with Mr. Wednesday (Ian McShane) continue as the Gods begin to assemble. Mad Sweeny (Pablo Schreiber) and Laura (Emily Browning) also return for this further exploration of Neil Gaiman’s novel in which the Gods of the Old World and newer deities clash for supremacy.

Barry Allen’s (Grant Gustin) daughter Nora (Jessica Parker Kennedy) has arrived from the future. But in Allen family tradition, she changed time and can’t go home. Her alterations to the timeline may have lead to the metahuman serial killer Cicada (Chris Klein) becoming more of a threat than she remembers. It’s up to Barry and Team Flash to find a solution for both problems before members of the team turn up dead.

Returns October 9 on the CW.

Karl Urban, Jack Quaid, Karen Fukuhara, Laz Alonso and Tomer Capon star as a team of vigilantes who take on the more hedonistic superheroes when their tendencies get out of line. But Billy Butcher (Urban) and Wee Hughie (Quaid) have more on their mind than their sense of justice when confronting an alleged superhero group with ties to the death of Hughie’s girlfriend.

Based on the bestselling and critically-acclaimed novel of the same name by Deborah Harkness, Teresa Palmer stars as Diana Bishop, a historian — and a witch denying her heritage — who accidentally discovers a long-lost bewitched manuscript in Oxford’s Bodleian Library. Its contents lead her into the heart of a dangerous underworld. While on her journey, she meets the enigmatic vampire and geneticist, Matthew Clairmont (Matthew Goode), who hides a dark family secret.

Based on the novel by Terry Pratchett and Neil Gaiman, David Tennant and Michael Sheen star as a demon and an angel dedicated to preventing the End Times as they’ve grown quite fond of their quaint British existences. But the rest of creation may not be so dedicated to tea and dreary weather as this pair of unlikely friends, whose relationship spans 6000 years, as the battle lines are drawn in the war to end all things.

Some time in the 1980s, Marcus Lopez (Benjamin Wadsworth) finds himself plucked off the streets of San Francisco and admitted to Kings Dominion School of the Deadly Arts. There, he is forced to face his own social anxieties, trauma from seeing his parents killed, and a lethal form of otherwise mundane high school experiences. As he puts it, “Just doesn’t matter where they from, kids are all the same – vicious. Only difference is, in this place … the dagger they put in your back is real.” Lana Condor, Maria Gabriela de Faria, Luke Tennie and Benedict Wong also star.

Christopher Meloni returns as Nic Sax, an ex-cop turned hitman whose Christmastime experience with his daughter Haley’s (Bryce Lorenzo) imaginary friend Happy (Patton Oswalt) led to, well, seemingly no redemption as Season 2 of Happy! switches to the Easter Season and Nic still has a refrigerator full of body parts. Ann-Margret joins the series as a former siren of stage and screen while Christopher Fitzgerald returns as questionable children’s entertainer Sonny.

Captain Christopher Pike (Anson Mount) takes command of the U.S.S Discovery as Micheal Burnham (Sonequa Martin-Green) learns her adoptive brother, and Pike’s science officer, Mr. Spock (Ethan Peck) has taken a leave of absence. His disappearance may be connected to a “red angel” Michael saw while on a mission. It may also be connected to Pike’s mission aboard the ship. Meanwhile, former Terran emperor Philippa Georgiou (Michelle Yeoh) takes a new job at the Federation’s black ops cabal, Section 31.

It’s No Man’s Land as Gotham City finds itself isolated after the destruction of its bridges. And while Jim Gordon (Ben McKenzie) faces one last battle for the soul of the city, his army buddy Eduardo Dorrance (Shane West) may prove to the Bane of his existence. The newcomer has dark plans for the city and a design on Alfred (Sean Pertwee) which may leave him completely broken. Yet, a Dark Knight may finally rise out of all of the chaos to prove Gotham always needed a special sort of justice. One served with a cape and cowl instead of a badge.