‘My Name … Is Aegon Targaryen’ and More Highlights from Game of Thrones Season 8, Episode 2

Jon breaks the news to Daenerys: He’s her nephew (ew), which had to happen this episode or else every headline would be, “Arya Gets Busy!”

An episode does have a name after all:  Episode 2: "A Knight of the Seven Kingdoms" 87%. The name highlights one of our favorite moments from the newest season 8 episode of HBO’s Game of Thrones, which aired on Sunday night. 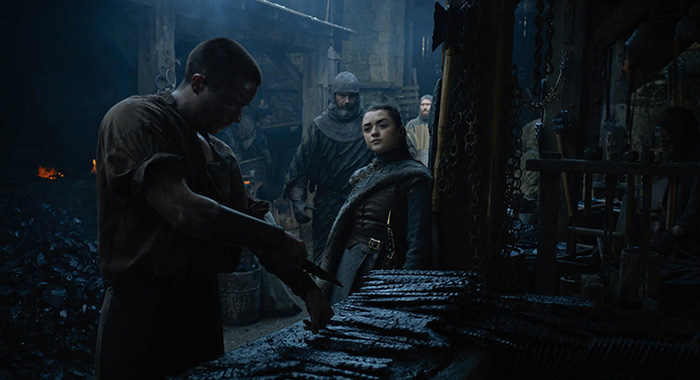 We’ve seen a bit of this in the trailer. Arya (Maisie Williams) says, “I know Death. He’s got many faces. I look forward to seeing this one.” What we didn’t know is that she was showing off in front of Gendry (Joe Dempsie).

Persuading him to stop trying to convince her not to fight, Arya starts throwing daggers at a post. They land in a staggeringly perfect formation, and Gendry – well, if he wasn’t aroused by her presence before, he’s clearly sputtering over this display. So no, Arya’s whole “I know Death” speech wasn’t the highlight here. The highlight was Gendry’s worshipful response. 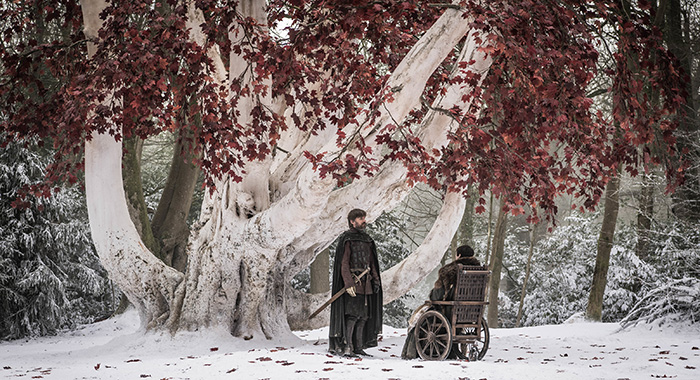 Jaime (Nikolaj Coster-Waldau) apologizes to Bran (Isaac Hempstead Wright) for trying to murder him. Bran gets it, though: The Fates had their way so that Bran could be this all-seeing wizard of uncomfortable stares. Jaime appreciates that Bran didn’t rat him out for that tower push, but what’s next? Bran will not confirm or deny that there is an afterwards. And for that, we think he’s being a bit of an asshole – the conversation was a highlight, but Bran is being a bit of a dick (more on that later). 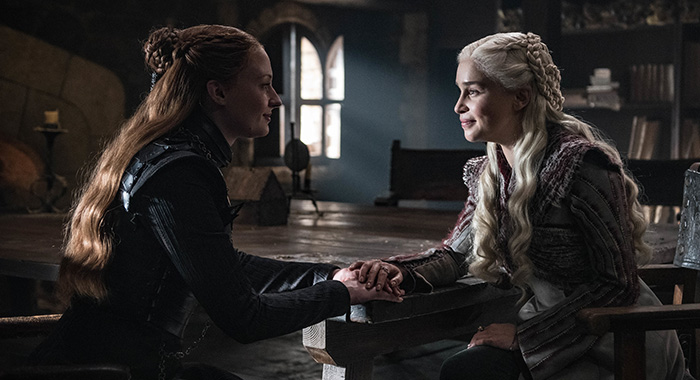 There’s that word again, but let’s give a nod first to the scene in which Ser Jorah (Iain Glen) stands up for Tyrion (Peter Dinklage) and, it becomes apparent, suggests that Daenerys (Emilia Clarke) make nice with Sansa (Sophie Turner). Daenerys takes his advice. She visits Sansa, is surprised by Lord Royce’s (Rupert Vansittart) respectful greeting, and has that awkward “I’m going to try diplomacy” smile on her face – it makes everyone uncomfortable, but then Sansa, truthspeaker, diffuses that weirdness by telling Daenerys that she was as mistaken about Cersei’s true intentions as Tyrion was. (Deflect blame much, Dany?) Daenerys likes it when people are honest, so a point to Sansa. Then, Daenerys notes how Jon Snow (Kit Harington) has derailed her own plans to take the Iron Throne. She loves him, she says. Point to Daenerys. But, really, who’s keeping score? Daenerys and Sansa are having a real moment – kicking and screaming inside probably, but real.

4. “I Want to Fight for Winterfell … Lady Sansa” 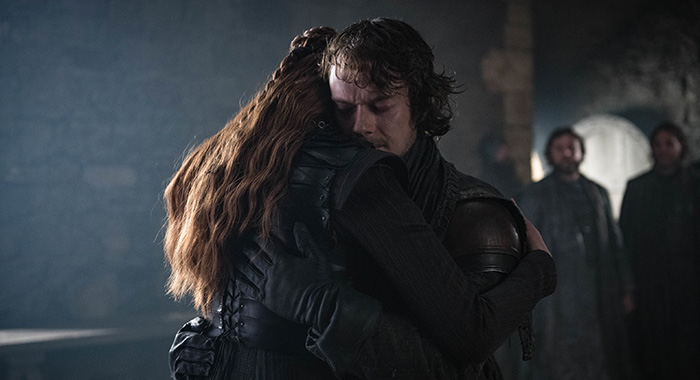 Give it up for Theon (Alfie Allen), showing what repentance means (and that Sansa has some power in the room with the queen). Sansa is clearly moved by seeing her father’s former ward again – man parts or no. 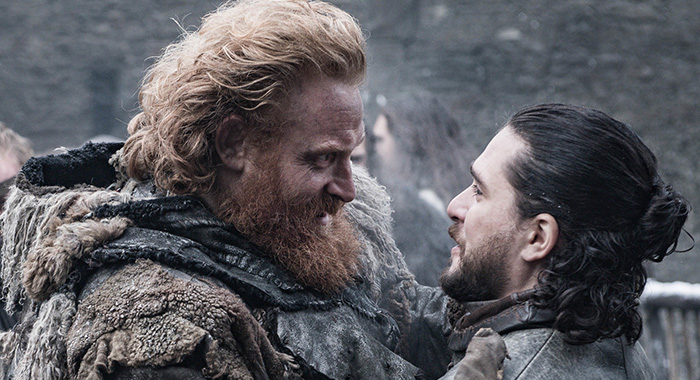 Jon’s reunion with Edd (Ben Crompton), Tormund (Kristofer Hivju), and Beric (Richard Dormer) is like a little amuse-bouche before the war. Tormund: “The big woman still here?” Yes, Tormund, the big woman is here. Will they consummate their thing? 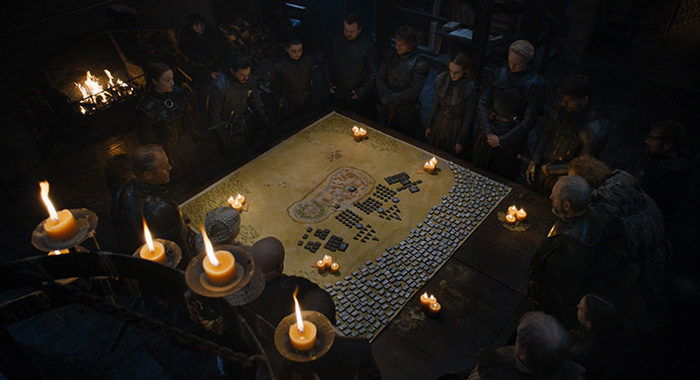 So, the meeting of all of the principal characters (minus Cersei and Euron) at Winterfell had a few spectacular moments within it.

Daenerys follows Ser Jorah’s advice and publicly declares her faith in and need for Tyrion. Haven’t we all felt like Tyrion at some point in our careers? Sometimes you just need a little PDA to make everything right.

Theon steps up with a pseudo-apology to Bran, telling him he took the castle from him, so now he’s willing to face the Night King with Bran to make amends. Good luck with that, Theon. (We have the sinking feeling that we’re about to get a lesson in just deserts.)

“We’re all going to die,” Tormund says, which gives voice to that sinking feeling. “But,” he says casting a glance over at his lady love, Brienne, “at least we die together.” New world order question: Tormund’s behavior is “creepy,” not “romantic”? I try to put myself in Brienne’s shoes – they’re big, that’s all I have to say.

Finally, Tyrion insisting that Bran tell him his story is hilarious: “If only we were trapped in a castle, in the middle of winter with nowhere to go.” Tyrion surely knows that Bran may not make it – clearly Tyrion is thinking about his future book deal. 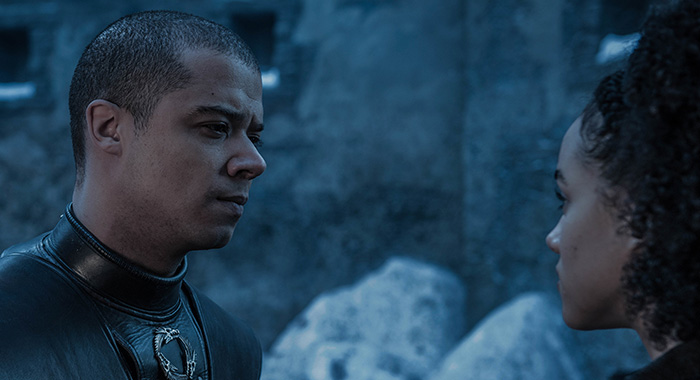 A friend summed up the black experience in the Seven Kingdoms: “Can we talk about Winterfell’s reaction to black folks comin up in there!!?!” Though I feel Grey Worm’s (Jacob Anderson) intent when he asks Missandei (Nathalie Emmanuel) if she wants “to grow old in this place” and then also  her wish to see Naath again, I also kind of feel like the Seven Kingdoms needs to be integrated. I wish she might have said something along the lines of “I think we need to bring Naath to the Seven Kingdoms.” Too bad about those dead wights walking.

We need a vacation in Dorne to remind us what multiculturalism is. (Here’s hoping the prequel mixes it up lots more.) 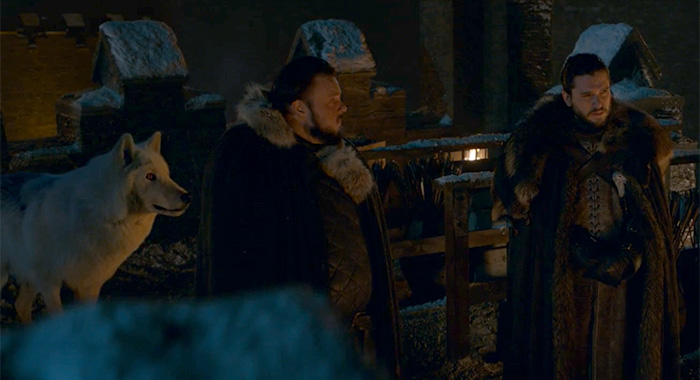 Jon and Sam are on the ramparts having a – Wait, what? Where the hell did Ghost come from? Don’t try to distract us with clever dialogue from Edd. A direwolf just magicked up in here at Winterfell! That was a reunion we were waiting for, and it occurred off screen? Was there an online short we missed? “A Ghost’s Journey”?

#GameofThrones Ghost showing up in this episode like pic.twitter.com/GWLD8lbamu 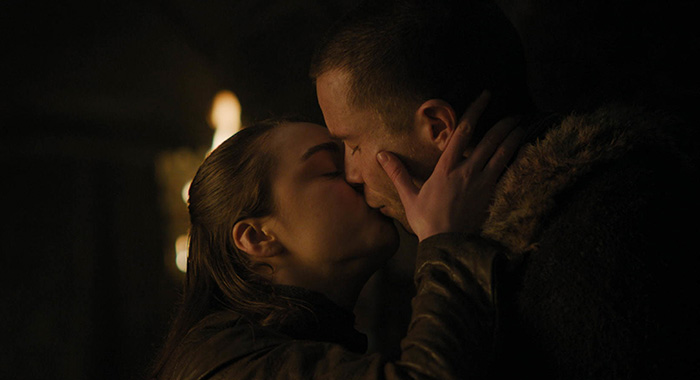 “Seduced” may be a strong word to describe how Arya asked Gendry to have sex. She kind of insists that he service her before they maybe possibly die because of his shoddy blacksmithing skills on her new spear. Kidding. Honestly, it was a powerful female moment: She stated the facts plainly (they may all die) and said what she wanted (to have sex before that happens). He was free to participate or go on his way. And that is what consent looks like, folks. 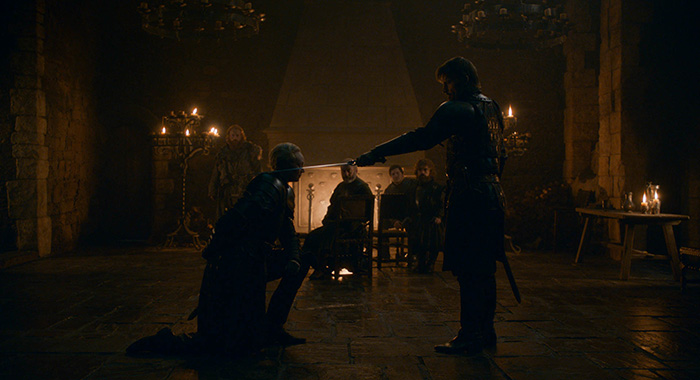 This episode has been a lovefest between Jaime and Brienne. She vouched for him when the council would have tossed him out, imprisoned him, or straight-up executed him. He scored points with viewers in telling her, “I’ll be honored to serve under your command – if you’ll have me.” Then later – facing an uncertain night with a dead foe – he gets into his cups and knights her. Brienne’s moist eyes reflected all of us in that moment. (If not you, then you have a black heart and only watch for boobs and zombies.)

Pod – maker of sympathetic faces, singer of songs. ♥ him! Tormund – a suckler of teats. We’ll leave that there. 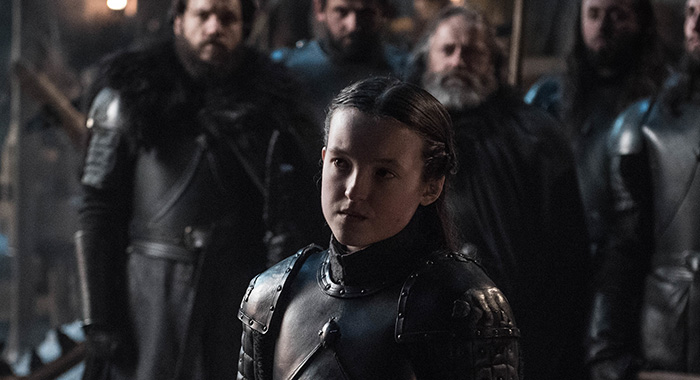 The one-on-one Ser Jorah had with little she-bear Lyanna Mormont (Bella Ramsey) went exactly as expected, with him trying to convince the tween Lady of House Mormont to retire to the crypt: “You’re the future of the House.” She, absolutely refusing: “I pledged to fight for the North, and I will fight.” 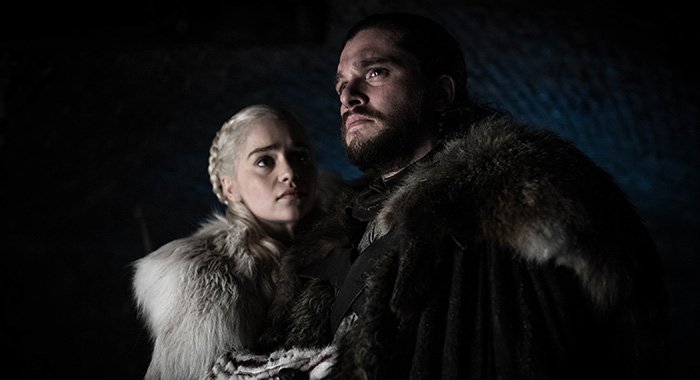 Jon’s in the crypt making brooding look good, when Daenerys comes in. “Who’s that?” she asks. “Mom,” he (essentially) says. He tells her the story of Lyanna and Rhaegar, and Daenerys is not exactly happy to have her lover be another contender for the Iron Throne. But before she can get pissed, horns blow and they dash out and nod to each other on the ramparts before, we assume, dashing off to mount dragons Drogon and Rhaegal.

Plus! A New “Jenny” Song

Florence + The Machine are the latest musical act to contribute to the Game of Thrones phenomenon. Have a listen in the video above.

What was your favorite moment from the episode? Tell us in the comments.

Game of Thrones airs on Sundays at 9 p.m. on HBO.