The first appearance of DC Comics’ Doom Patrol advertised the ragtag group as “the world’s strangest heroes.” More than half a century later, those misfits have their own series on the DC Universe streaming service, Doom Patrol.

Premiering February 15, the series follows a group of very unusual characters — a human brain contained in a robot body, a former actress with the ability to stretch her body into impossible shapes, a horribly burned pilot containing an electromagnetic force, and a paraplegic genius who brings them together — as they begrudgingly embark on a mission to stop the supervillain Mr. Nobody from plunging the world into a fit of absurd madness.

“He’s obviously got a very particular kind of personality; it’s a rich and complex personality,” Dalton told Rotten Tomatoes. “But he might be the sanest one of the lot — or the most normal at times.” 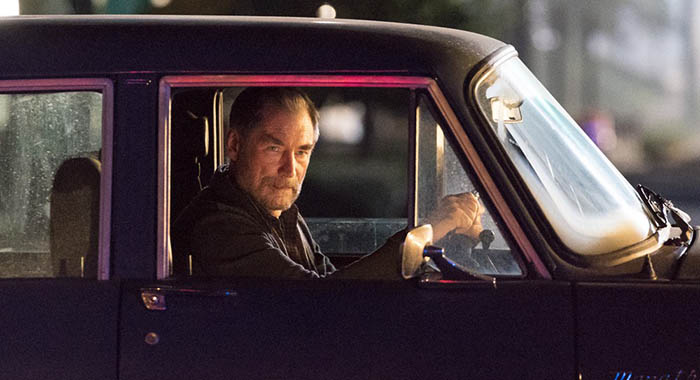 While the Doom Patrol cast was previously introduced in an episode of DC Universe’s first live-action series, Titans, the characters made their first appearance in the DC Comics anthology My Greatest Adventure in 1963. The low-selling series was in danger of cancellation when writer Arnold Drake was tasked with creating a new lead feature that could potentially save the title. Drake, fellow writer Bob Haney, and artist Bruno Premiani assembled the group of very unusual characters he dubbed collectively “the Doom Patrol,” which were advertised on the cover of My Greatest Adventure #80 as “the world’s strangest heroes.”

Now, 56 years later, their creations are leading their own TV series, which is based on Drake, Haney, and Premiani’s work and later comic book stories by Grant Morrison, Richard Case, and a number of other artists.

Robotman, Negative Man, Elasti-Woman, Crazy Jane, and new recruit Cyborg are led by the Chief, whose keen analytical mind and mechanical prowess was able to save the brain of Cliff Steele (Brendan Fraser), a race car driver from the 1980s who survived a terrible accident only through The Chief’s intervention. While Cliff is still alive, the fact that he is trapped in a mechanical body means he’s without his five senses or full range of emotions — and without his full identity.

“Hubris got the best of this narcissistic daredevil race car driver who cheated in more than one way,” Fraser told RT.

But in cheating death, Cliff also became Robotman, a person only partially aware of Cliff’s life as the series begins. According to Fraser, there is a clear delineation between Cliff and Robotman that will be explored as the series progresses.

“He needs to learn to be a better human being than he ever was in a human body,” Fraser explained. “And he can only do that by being trapped in this mechanical creature.” 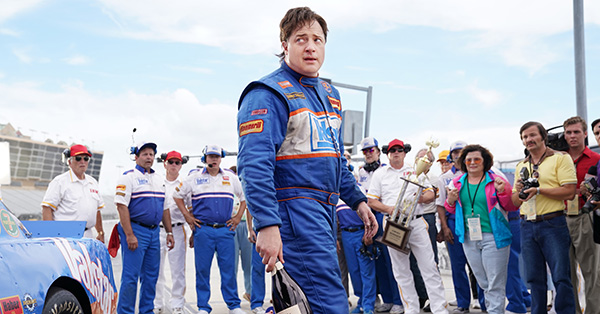 The nature of Cliff’s confinement, and that of fellow Doom Patrol member Larry Trainor (Matt Bomer), is obvious from their lack of human faces — Cliff’s robot face cannot mimic expression; while Larry, the former test pilot, hides his badly burned visage behind bandages — but another longtime resident of The Chief’s home uses a very different mask to hide her internal prison. The third member of the group, Rita Farr (April Bowlby), was an actress in the Hollywood studios of the 1950s. But an on-set accident turned her into a blob of stretchy gelatinous flesh that she struggles to keep in lockstep with the celluloid memory of her more glamorous appearance. While it may seem narcissistic on its surface, Bowlby said the underlying nature of her character’s identity crisis makes her all the stranger.

“I think she pushes people away, but all she really wants is people to love her,” Bowlby said. “She’s surrounded by old memorabilia of herself, obsessed with herself, and then doesn’t understand why other people aren’t.”

Also strange for Bowlby was creating two different versions of Rita. One appeared in an episode of DC Universe’s Titans last October, but the other is the one audiences meet on Doom Patrol.

“Rita [on Titans] was, I felt, very loving and kind, almost like a ’50s housewife,” Bowlby said. But when Jeremy Carver came on board to develop Doom Patrol into its own television show, he decided to rethink the characters and set it apart from Titans entirely. Bowlby abandoned the motherly Rita in favor of the one she read in Carver’s first script.

“She’s crippled emotionally,” she said of the revised character. “And she likes to protect herself from people and being outside in the world.” 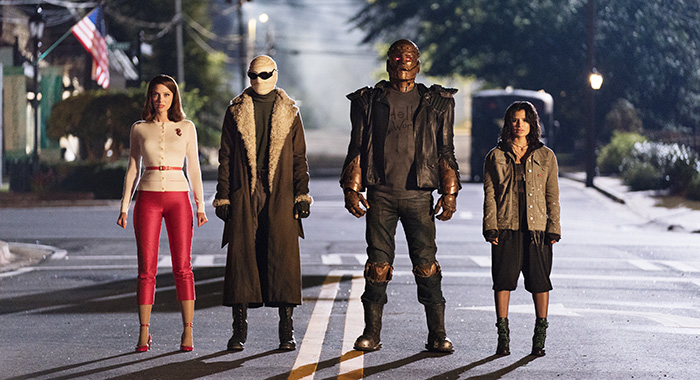 “I imagine that eventually we’ll see Rita own her power, but right now it is not a power. It’s a threat to her. She doesn’t like it. She doesn’t know how to control it,” she explained. “It’s almost like she’s working against even what [the Doom Patrol is] trying to do.”

In fact, Fraser and Dalton both feel their characters are far from the hero archetype. Although Dalton joked that the Chief is somewhat heroic in giving the group a place to live, he added that the viewer should be “left in two minds about him” and his motivations. And as Fraser put it, Cliff is “not out to fight crime and make the world a better place like the Justice League.”

But there is one character on Doom Patrol is looking to be a hero: Victor Stone, also known as Cyborg (Joivan Wade). The character may be the best known of Doom Patrol’s cast thanks to his appearances on Teen Titans, Teen Titans GO!, and in the Justice League feature film. The series honors that rich media history by envisioning him as a young man anxious to get on a big superteam like the Justice League. The survivor of a horrific accident that took the life of a close family member, Vic was rebuilt with cybernetic limbs and neural implants that offer him greatly enhanced speed, endurance and a few other abilities. With his promising football career ended by the accident, Vic is dedicated “to being that superhero and protecting people and essentially giving back,” Wade explained.

“Being with the Doom Patrol is a great opportunity for him to do that and to learn,” he continued. “He gets to test out being a leader within the group and train to function within a team, which are skills he’ll need.” 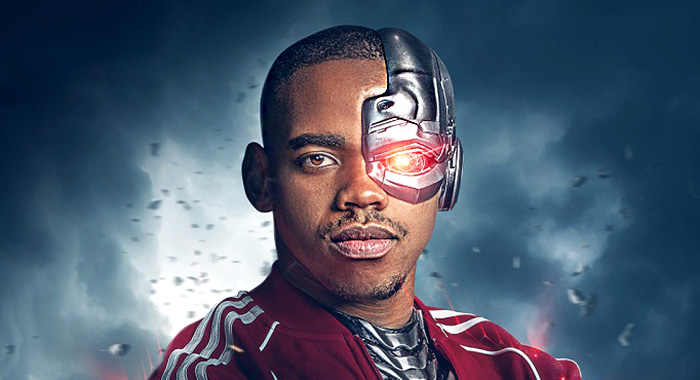 But even Justice League candidates can have some strangeness to them, and Wade teased a potential oddity for the Vic.

“He’s a computer as much as he is a human,” Wade said, “so having this piece of software and the cybernetics which made his body up, there is this question of, ‘Well, it’s programming, isn’t it?’ So based on that, how does he know what’s real and what’s not real?”

While that leads to a question of identity, Wade is certain Vic’s desire to be a hero is genuine to the man and not his program.

When it comes to identities, though, Crazy Jane (Diane Guerrero) has the market cornered. Created by Grant Morrison and Richard Case in the author’s seminal 1980s run on the Doom Patrol comic book, Jane is a metahuman dealing with Dissociative Identity Disorder — and each of her 64 personalities has a superpower of its own. Jane’s struggle leads to plenty of trouble at the Caulder mansion and plenty of strange happenings in the town nearby. But Guerrero said there is a very mundane and relatable aspect to Jane that viewers will connect with right away.

“Her brain’s never off,” she said. “That’s part of the reason why some people drink or take on hobbies. It’s just to quiet the mind. Something’s always constantly battling to surface.”

For Jane, the battle is containing those personalities – all with their own scruples in addition to their powers.

“Her job is to be steady and to be neutral and not to feel.” Guerrero said. It makes the character a hero in her eyes just be trying to manage it all. 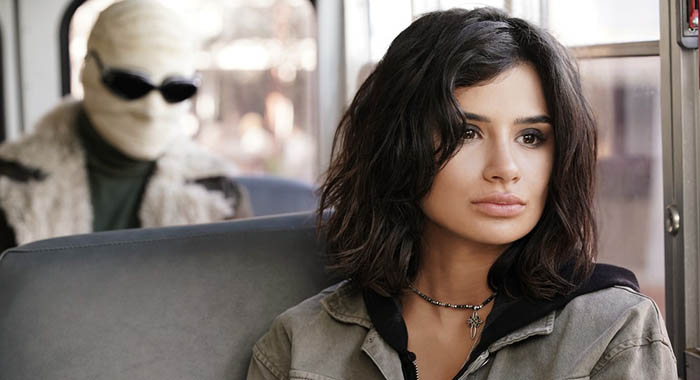 Nonetheless, less heroic personas do emerge, like Hammerhead, a super strong and extremely angry person who manifests despite Jane’s best efforts to keep the anger contained.

“[Jane is] the person who has all these feelings, but doesn’t want to feel too much, and Hammerhead is just is totally OK being in that space and unapologetic,” Guerrero said. While the personality often makes life in the mansion worse, “There are situations that present themselves where you need Hammerhead’s force and anger to sort of help you through it.”

Though Hammerhead’s strength can be advantageous, it may be no match for the group’s principle antagonist in the the first season: Mr. Nobody. Played by Alan Tudyk, the character is an old foe of The Chief and someone against whom the five main characters must unite. While several members of the Doom Patrol cast question their status as heroes, Tudyk said Nobody is “embracing his villainy” as the series begins.

“He wants to hurt Niles, so he uses everything at his disposal — and so much of the world is at his disposal — to hurt him.” Unlike the others, Nobody chose his strangeness. That decision led him to a power and an understanding of the absurdity behind the world, which means he might be able to see himself as a therapist to the group but would take “too much joy in the pain it causes.” As Tudyk explained, “He would use the information you gave him as a therapist against you.”

Though Nobody’s intentions may be malicious or even heroic in some absurd way, they will change the Doom Patrol forever. As Guerrero put it, “I love how these people are forced to look at themselves — to really, really look at themselves — because they’ve all pretty much given up.”

Said Dalton, “Their potential strengths are their downfall. They don’t know how to use them in any other way than in this self-destruction, really.”

In the comics, the group eventually found a way to become heroes, as the cover blurb promised. Perhaps all their television counterparts need to do is find a way to care again, embrace their strangeness, and curb their self-destructive tendencies. It would be heroic enough of an act — at least for one season.