Plus, more on the new drama from director Francis Lawrence and Momoa's costars, including Alfre Woodard, Sylvia Hoecks, and Hera Hilmar.

Ever since Jason Momoa (Aquaman) played fictional warrior chieftain Khal Drogo, leader of a tribe of 40,000 Dothraki horsemen on Game of Thrones, the actor has used his clout to tell stories of Native American tribes — in modern day on the series The Red Road or movie Road to Paloma, or in a historical setting on Netflix series Frontier.

His Apple TV+ series See is set 600 years from today, and the tribes that exist in this fictional future have lived through a global pandemic that decimated humankind and left survivors blind. Despite the differences between See’s tribes and Native American tribes, Momoa saw parallels.

Take an in-depth look at See with these seven these things we learned about the series from Momoa, other cast members, and director Francis Lawrence.

1. THE TRIBES OF THE OLD WEST ARE REBORN ON SEE 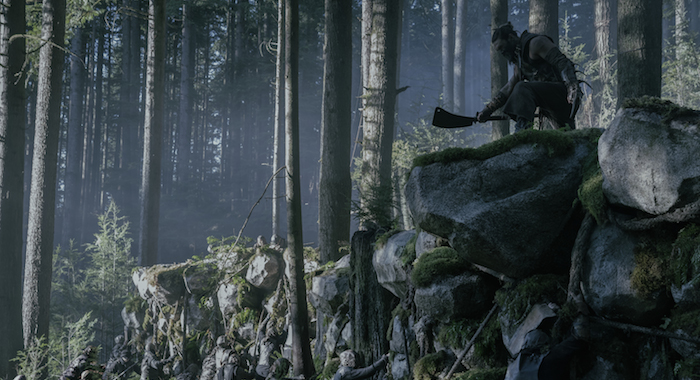 Momoa confirmed that it’s no coincidence the survivors of See divided into tribes. He said See creator Steven Knight conceived the tribes like a classic Western.

“When I first talked to Steven Knight, he is really, really fascinated with all the Native American cultures, like all the tribes,” Momoa told Rotten Tomatoes. “He really wanted to make a Western almost in the sense of having Comanches, Apaches, and all the different types of tribes like the Payans and the Alkenny.”

Momoa’s Baba Voss is a warrior of the Alkenny tribe, which is subject to oppression by the rulers of the Payan kingdom.

“I think it stems out to all different types of tribes and not just to the Native [American] culture,” Momoa continued. “I think we cross over a lot of things in this. Just by eliminating vision, you’re eliminating racism. You’re eliminating color and you can sense a lot more evil than good when you’re down to senses smell, touch, and feel.”

2. THE ALKENNY TRIBE REFLECTS THEIR LAND 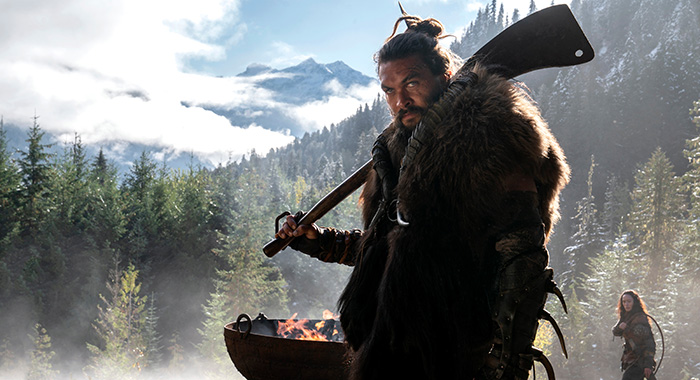 The Alkenny live in the mountains high above other tribes. They’ve set up rope trails in the woods along the hills and rock barricades to keep other tribes out. The land they inhabit speaks volumes about the character of the Alkenny, even though they never mention it.

Lawrence, who directed the last three Hunger Games movies, directed the first three episodes of See, and established the world of the show. Lawrence said he and Knight decided where the tribes came from first and that determined their tribal aspects.

“Most of the decisions that we made for any given tribe were where they were geographically, and starting to think about how they might live and what they might have at their disposal based on geography,” Lawrence said. “So the Alkenny at the beginning of the show is a mountain tribe, and so everything we sort of designed for them was just based really on geography.”

Voss is the Alkenny’s military leader. Paris (Alfre Woodard) is a more peaceful Alkenny elder. Woodard said if you stick with See, you’ll see that not all tribes are as culturally evolved as the Alkenny.

“We’d like to think that we are the most civilized, enlightened, highly developed,” Woodard said. “Some of the other tribes that you’re going to meet if you watch all the way through the eight episodes — people are making love, making war, having babies, doing life.”

3. THE PAYANS RULE WITH AN IRON, AND ELECTRIC, FIST 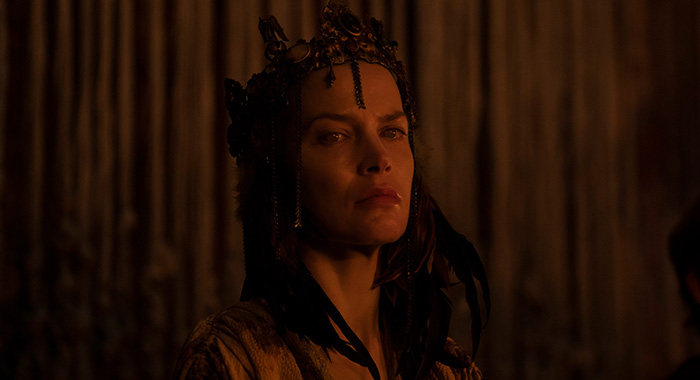 Sylvia Hoeks plays Queen Kane, ruler of the Payan kingdom, which has electricity, and she lords over the other tribes.

“She uses the turbines as gods’ voices,” Hoeks said. “In episode 2, one of the lords tells me the gods now only sing with two voices. That means that one turbine is broken and that means that she is losing power. So her way of ruling is very much by distance. People shouldn’t come near, because then they’ll feel how emotional she really is and how vulnerable she really is.”

Viewers can see the differences between the industrial Payan world and the natural Alkenny world. Kane is also so paranoid, she’s installed noisemakers in every room so she can always hear if someone is coming.

If other tribes want access to her electricity, they have to pay. Tamacti Jun, played by Christian Camargo, is the Royal Tax Collector and Witchfinder General who collects for Kane.

“This is sort of the largest of the ruling class really, her and the Payans,” Camargo said. “There’s not that many people on the planet in this story. I think the total is two million in the whole world left, after this virus sweeps through. So these monarchies are very powerful, because there’s a limited supply of humans. And they’re all very dependent on her because she runs the energy, the God flame, the power. So it’s extremely manipulative, in a way.”

5. A BLIND MAN TAUGHT THE SEE ACTORS HOW NOT TO SEE 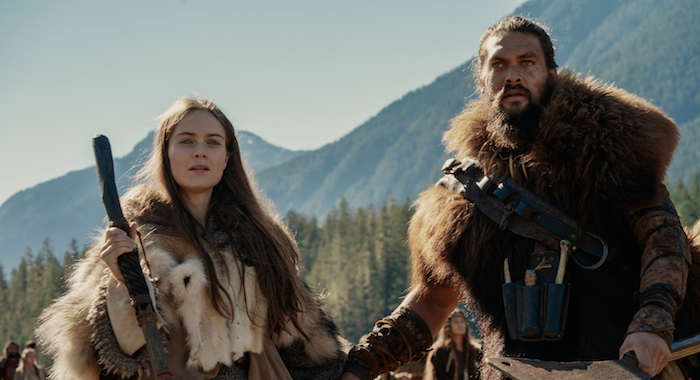 Joseph A. Strechay was See’s blindness consultant for the sighted actors. Lawrence said in a press conference that many of the cast members had to break sighted habits, like nodding when someone else talks, because blind people wouldn’t nod to other blind people.

“I definitely once nodded,” Hilmar said. “I feel like maybe there’s a sort of slight going into a nod that might be in the show. Maybe that lives still in our muscle memory 600 years from now up to a point.”

“I got called out a lot,” Momoa said. “Hera’s really good. It’s tough because you can see when you focus and you know it. You can’t focus in on anything. You literally have to see this and this has to all go fuzzy. You have to take it all in and you can’t really be in one spot.”

6. TWO ALKENNY CAN SEE, BUT IT’S A SECRET 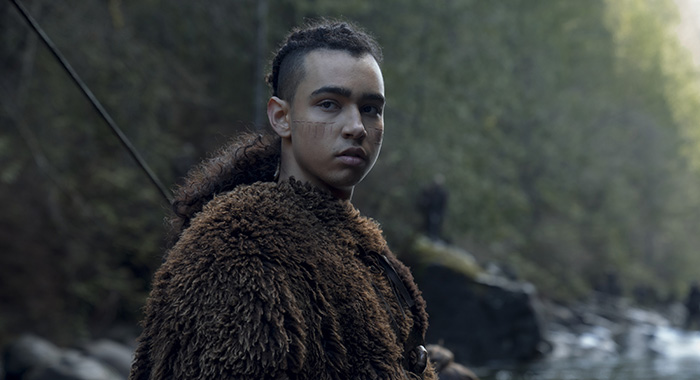 It has been 600 years since anyone could see, so when Kofun (Archie Madekwe) and Haniwa (Nesta Cooper) are born with sight, they keep it secret. Voss keeps their secret too, fearing how people like Kane might use them if she knew they could see.

“The Alkenny are more of a hidden tribe,” Cooper said. “They don’t really go out and mesh with the other tribes or villages in the area. They’re very, very rooted in their culture and their customs and rituals. They’re also a very religious tribe as well.”

Madekwe added, “The appreciation as well for those customs and rituals and that idea of community and stuff, that’s what my character has learned to hold most dear to him. That’s where Kofun and me were different.”

You might never see it on the show, but Cooper thought about what Haniwa’s childhood might have been like. Even if she could see, she’d have to play with friends who couldn’t and couldn’t know she could see.

“When we went through I blindness training, we all were like, ‘OK, what kind of games do you think we played when we were younger? What were songs that we sang that our mother sang to us when we were sad? What happens when a person passes away in the Alkenny?’” Cooper speculated. “These are all things that we all were trying to figure out together.”

7. THE ALKENNY ARE NOT ALONE IN THE WOODS 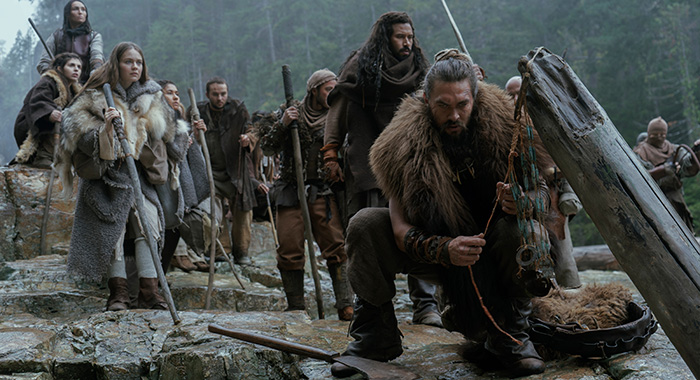 The premiere of See showed what a formidable force the Alkenny are in battle, fending off an enemy tribe. It’s not only invaders who threaten the Alkenny. There are still all the dangers of the forest, as Voss finds out when he has to stand his ground against a bear.

“I had to get off of work and then go train with bear many times. He’s very cute and cozy: ‘Come here, brother,’” Momoa said with a bear-cuddling gesture. “It was amazing. He’s huge. He’s nine-foot tall when he stands on his feet, hind legs.”

If anyone in the insurance department is reading this, Lawrence was adamant that Momoa did not actually wrestle the bear.

“No, Jason could not actually touch the bear,” Lawrence said. “The trainer could touch the bear. The bear was actually quite friendly, which made filming that sequence much more difficult than I wanted it to be, because the bear was a little lazy, a little grumpy, and sort of friendly. So it made it hard for it to look as aggressive as I wanted.”

Four episodes of See are now available on Apple TV+.