Two decades after its release, the film's distinctly early-2000s aesthetic sensibilities, over-the-top industry satire, and killer soundtrack have made it a cult favorite. 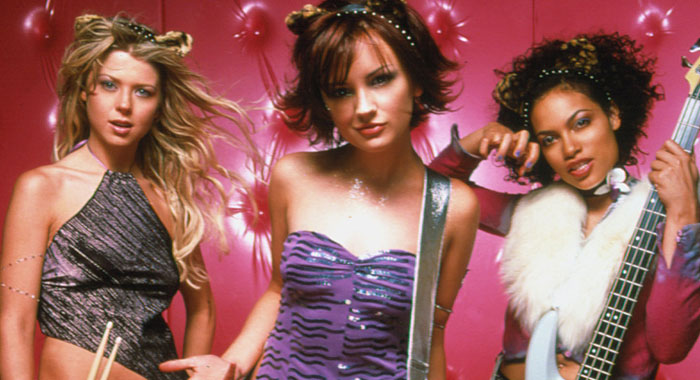 Music movies are having a moment right now. In 2018, Bradley Cooper and Lady Gaga lit radio waves and theaters ablaze with the third remake of A Star is Born; that same year, Bohemian Rhapsody earned four Academy Awards; and last year, Renée Zellweger took home the Best Actress Oscar for playing Judy Garland in a biopic. Ma Rainey’s Black Bottom is a strong contender for a few Oscars in a couple of weeks, we’re getting a film about Aretha Franklin later this year, and dramas about Elvis Presley, Bob Marley, and Peggy Lee — among others — are all in the works.

But 20 years ago today, before the world was clamoring for biopics, musicals, and films about musicians, a wild satire based on a comic book from the ’60s and cartoon series from the ’70s was released in theaters, and it failed, both critically and commercially.

That film was Josie and the Pussycats, and despite its 53% Tomatometer score and its box office failures, it’s one that deserves to be celebrated.

So put on your cat ear headphones and stick a DuJour CD in your Discman, because in honor of the 20th anniversary of Josie and the Pussycats, we’re breaking down the reasons why it should be recognized as one of the most iconic music films of the 21st century.

It’s a Time Capsule That Gets Better with Age

Remember a time before digital music and streaming services? A time when you had to watch MTV to see your favorite artists? A time when AOL was one of the biggest brands in the world? That’s the time of Josie and the Pussycats.

If ever there was a movie that screamed early-2000s, it’s this one. Boy bands, rampant consumerism, TRL, Breckin Meyer — you really get everything you could want out of a Y2K-era satire of pop culture, and despite being so quintessentially of its time, the film only gets better with age.

For one thing, Josie and the Pussycats is aggressively overt with its product placement — even Mac and Me is tame by comparison — but unlike most other films, its corporate promotion is more world building than brand endorsement. A few years ago, writer-director Deborah Kaplan stated, “We didn’t take a dime from any of those people… They had to be in on the joke and let us use their logos.” Which, looking back, is hilarious, especially when you now spy an ad for Nokia cellphones, a reference to MovieFone, or a wall of AOL logos.

The same goes for seeing the computer screen of a live-streamed Pussycats concert, a line of fans waiting to buy the hottest CD, or Total Request Live and its host Carson Daly, who at the time was the real-life boyfriend of Tara Reid, who plays Melody in the film (isn’t that just the most late-’90s thing ever?).

As more and more of these companies, characters, and cultural touchstones fall by the wayside, the satire of Josie and the Pussycats only gets sharper.

The Record Industry Satire Is Spot On

We all know how most music films work; there’s an artist or a band who does a small gig/has a hit song/sings Edith Piaf in a bar, they get noticed by someone important, and soon enough, due to their incredible talent, they’re at the top of the charts playing sold-out shows. But one major aspect of the music industry that rarely gets any play is the antagonistic record labels who exploit artists’ talents.

Except that’s not what happens at all, because Josie and the Pussycats isn’t just a simple, inspirational tale about overcoming obstacles with talent and perseverance, it’s a critique of the way the musical industrial complex manufactures stars, uses them to promote fashion/toys/products/the military/etc., and then spits them back out when they’ve found the next band du jour.

MegaRecords CEO Fiona, played by Parker Posey, aims to accomplish this by brainwashing the band’s fans through subliminal messages hidden in their recordings. What better way to manipulate listeners into loving Matt Damon and wearing orange sweaters? Of course, it’s also pretty helpful in making Josie and the Pussycats an overnight sensation or, you know, attempting to break them up so Josie can fly solo and become a pop idol whose music will, in turn, be used to create a generation of mindless consumers.

The Music Is Outstanding

The one thing a music movie has to have is killer music, and Josie and the Pussycats has that in spades.

With tracks written by 12-time Grammy winner Babyface, the late, great, EGOT-nominated cinematic earworm maestro Adam Schlesinger, Jane Wiedlin of the Go-Go’s, and Adam Duritz of Counting Crows, just to name a few, and produced by Babyface and Schlesinger with vocals performed by Kay Hanley of Letters to Cleo, this film and its soundtrack album are filled with bangers.

From the first power chords and hits of the hi-hat on the soundtrack album’s opening song, “3 Small Words,” the music bursts with a professionalism far beyond what you might expect. But the subsequent lyrics “I’m a punk rock prom queen” shock you back into remembering that this is actually a song from Josie and the Pussycats. This song and “You’re a Star” evoke pop punk princess Avril Lavigne a full year before her first album and subsequent stardom, and the power chord-laden “Shapeshifter” would fit great on any Good Charlotte album.

At the same time, this film is perfectly situated in the zenith of the Backstreet Boys/NSYNC era, and the film’s ill-fated boy band, DuJour, hits all those same notes just as hard in “DuJour Around the World” and “Backdoor Lover,” with the latter being deployed in the film with an over-the-top but also completely spot-on music video.

Despite being a send-up of the music industry, the songs are so incredibly earnest and the musicianship is so well done that the music stands on it own.

People noticed, too. Despite the film’s disappointing box office run, the soundtrack album went certified Gold and hit the Top 20 on the U.S. Billboard chart. In the subsequent years, there have been multiple vinyl re-releases of the soundtrack, including one that dropped behind a 2017 show that had more fans than were at the film’s climactic concert, proving people are still clamoring for Pussycats songs 20 years later.

If you ask me, “Pretend to be Nice” ranks right up there with the best movie songs from the past 20 years, and that includes “Lose Yourself,” “Let It Go,” and “Shallow.”

It Paved the Way for the “Archie-Verse”

In 2001, nobody really cared what drama was happening in Riverdale or which witches were living in Greendale, but now the Archie Comics extended universe, as it were, is a cultural phenomenon. And it became one because these shows follow a template set by Josie and the Pussycats.

With its PG-13 content and tongue-in-cheek approach to the original content, this film is a stark departure from the family-friendly Melissa Joan Hart-led Sabrina the Teenage Witch sitcom and the Scooby-Doo knockoff cartoon series. Josie and the Pussycats instead lives in a world of its own, a hyper-realized pastiche of pop culture, comic book visuals, satire, throwback allusions, and darker-than-expected drama that somehow works.

Though it draws inspiration from the old comic book series of the same name, it has been dragged into the 21st century and thrust into a dramatic new contemporary world complete with all the problems that tweens, teens, and young people face these days.

Now, you’ll find a similar sensibility in current hit Archie Comics shows like Riverdale and Chilling Adventures of Sabrina that serve as spiritual and narrative successors to Josie and the Pussycats. With Riverdale renewed for at least two more seasons and another spin-off in development, Archie Comics won’t be going anyway any time soon, and Josie and the Pussycats was the catalyst for it all.

Josie and the Pussycats was released in theaters on April 11, 2001.