Marvel's Hawkeye hits the bullseye, critics say on social media. It's a romp that delivers action and humor in a Shane Black–style send-up for the holiday season.

The next Avengers story getting the television treatment is Hawkeye, which will drop its first two episodes to Disney+ on Wednesday, November 24. The series takes viewers to the holiday season in post-blip New York City, where Clint Barton (Jeremy Renner) is still picking up the pieces following the events of Avengers: Endgame. A select group of TV critics and journalists was granted access to the first episodes of the series, and by the looks of things, Marvel has another small-screen hit on its hands. (Full reviews drop next week.) Hawkeye and his bow and arrow are back to battle more threats from his past while doing his best to keep up with newcomer Kate Bishop (Hailee Steinfeld) while protecting his family during Christmas time in New York City. What could go wrong?

Here’s what critics are saying on social media about Hawkeye season 1:

HOW DOES IT COMPARE TO DISNEY+’S MARVEL LINE-UP?

The first two episodes of #Hawkeye were decent, but nothing that grabbed me after the first episode’s killer opening. – Sean O’Connell, CinemaBlend

#Hawkeye is solid, but doesn’t have a plot that commands attention in the first two episodes. But where it shines is giving Clint Barton time breathe as a character, showing how he deals with being recognized as a superhero and the hardship that comes with it. – Ethan Anderton, SlashFilm

This feels like the first MCU Disney+ series to actually feel like a TV show (maybe second after WandaVision) and I mean that in a good way. – JacobDFilm, Discussing Film

HOW ARE JEREMY RENNER AND HAILEE STEINFELD?

Hailee Steinfeld is perfect as Kate Bishop. She’s such a rookie and I love it. I’m looking forward to seeing more. – Nathaniel Brail, Heroic Hollywood

Marvel’s #Hawkeye can be summed up with one name – Kate Bishop! Hailee Steinfeld enters the MCU, and her presence is immediately felt. To use a cliché term, she is a scene stealer. The immensely talented actress is who fans wanted and we can say that she does not disappoint. – Geek Vibes Nation

Hailee Steinfeld makes an outstanding debut as #KateBishop, a lively aspiring young hero who has an outstanding dynamic with Jeremy Renner. These two make a great team, and it’s their ongoing relationship that will be the heart of the series. – Ethan Anderton, SlashFilm

My bet is that Hailee Steinfeld as Kate Bishop will become one of best female superhero characters in phase 4 of the MCU. Steinfeld is charming, funny and such a bad ass. She makes the character her own. I predict big things are in store for @HaileeSteinfeld in the MCU. #Hawkeye – Scott Menzel, We Live Entertainment

HOW DOES IT EXPAND THE MCU? 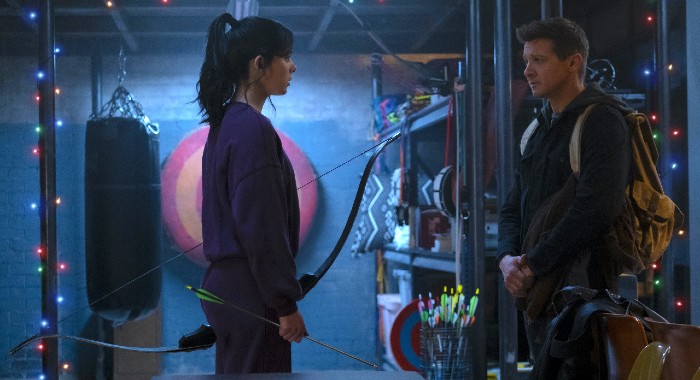 The first two episodes of #Hawkeye jump around to establish various elements, seemingly setting up the bulk of the story for later. It’s a lot of fun to watch through Kate’s eyes!

It obviously borrows heavily from the Matt Fraction & David Aja comic series, but there are still some twists and turns in the first two episodes. – Hunter Bolding

I also love the way #Hawkeye emotionally connects to the MCU – it’s not about cameos (but believe me I was looking for them!), but about how previous events have led the characters to where they are. – Brett Rivera, ScreenRant

Also loving how the show is adding more emotional layers to Clint’s experience and digging into past events’ effect on him. Got very high hopes that’ll continue and make him an even richer character. – Perri Nemiroff, Collider

WHAT IS THE OVERALL TONE OF THE SERIES? 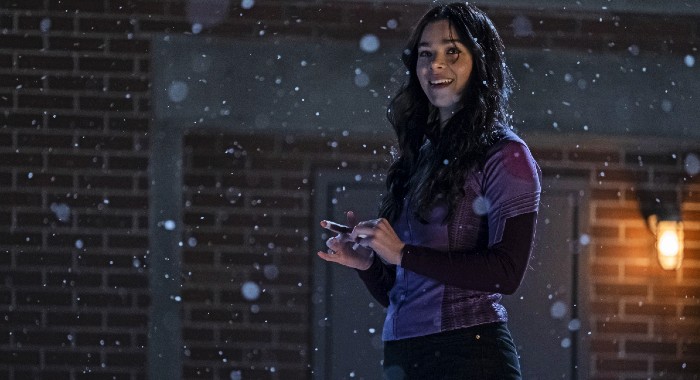 If you’ve been hoping for that #Daredevil feel in the #MCU, then #Hawkeye is definitely for you. @JeremyRenner and @HaileeSteinfeld make the perfect team, and #KateBishop? My new favourite hero. Based on the first two episodes, this is gonna be something special, bro. – Josh Wilding, ComicBookMovie.com

Showrunner Jonathan Igla choosing New York City set during the Holidays was a brilliant decision. With some beautifully shot sequences, it really captures the love and nostalgic moments people have for this time of year. – Geek Vibes Nation

Certain elements feel a bit too silly or superfluous, and the lingering, presumed villain feels cartoonish. Perhaps it’s because there’s something else bubbling beneath the surface. I have theories. Otherwise, it’s nice to have a low stakes, street-level superhero series again. – Ethan Anderton, SlashFilm

I really enjoyed the first two episodes of #Hawkeye. It’s light and breezy in a very Shane Black way but the depths to which it simultaneously explores Clint’s trauma and Kate’s privilege really surprised me. Not 100% sold on the story yet but the characters are excellent. – Germain Lussier, IO9

Really enjoyed the first 2 episodes of #Hawkeye! Every Marvel D+ show so far has had a completely different vibe & Hawkeye’s lean into the Holiday season is a blast. Eager Kate’s dynamic with grumpy Clint is especially great. Can’t wait for more Hailee – Ash Crossan, ScreenRant

The first two episodes of Hawkeye premiere on Disney+ on Wednesday, November 24. The remaining four episodes will debut on subsequent Wednesdays.