Catch up with the DC Comics-based Fox show ahead of its midseason return episode.

Gotham took a nice, long hiatus this year. Instead of the usual winter break, Fox cleared room for special programs and competition from the Olympics, and the last new episode of the series aired on December 7, 2017. A lot transpired in the episode and a lot has transpired in the land of comic book television since that time. It never hurts to get a refresher, so let’s catch up on Gotham and see where things left off for the denizens of comics’ best known cesspool before the spring premiere, “A Dark Knight: Pieces of a Broken Mirror.”

Jim’s Latest Deal with the Devil

Jim Gordon (Ben McKenzie) is a lousy negotiator. His attempt to bring Carmine Falcone (John Doman) back to Gotham City led to a deal with his daughter Sofia (Crystal Reed). She promised to destabilize the Penguin’s hold on the city and the Gotham City Police Department. And considering that they slept together before the business deal was even a possibility, it seemed like a pretty sweet arrangement all around. But Jim kept discounting Sofia’s smarts and thirst for revenge. Silly man.

Sofia was plotting her revenge on Jim for killing her brother Mario from the moment he arrived in Florida to treat with Don Falcone.

When we last saw the two together, Jim appeared to have cause to bring her in for conspiracy, murder and a number of other crimes. Unfortunately for Jim, she had a card to play: taking her down would burn him in the process. And now that Jim is finally a captain in the GCPD — thanks to her meddling — mutually assured destruction would be bad for the fledgling morality he brought to the cop shop. Which, somehow, was also part of her plan. Jim must live as a compromised toady while honored as a hero.

It is unclear how Jim will get himself out of this one – or how many people will suffer as collateral damage because of his actions – but one imagines he will not suffer Sofia’s boot for long. Also, considering all the violence began because he chose to recruit her, how will he atone for this?

Of course, no mention of the Jim/Sofia detente would be complete without mentioning Sofia’s role in the death of her own father. She made it look like a Pengiun (Robin Lord Taylor) hit, right down to setting herself up as a target for extra plausibility. But Jim is a good detective, so he sussed it out. But since he is also a bad cop, he cannot do anything about it.

Meanwhile, we mourn the loss of Carmine Falcone, whose effortless air of authority always made him a consummate antagonist; even if he sold Sofia out to the Penguin. 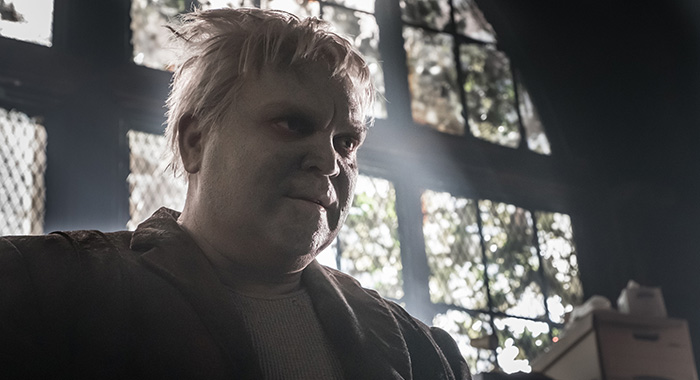 Cyrus Gold, aka Butch Gilzean (Drew Powell), never had it easy. Despite being a great henchman, he was always losing his leader. Occasionally, his loyalty was subverted or even abused. But he eventually had a gang of his own and the eye of Tabitha Galavan (Jessica Lucas). Then he was left for dead. His body washed up in Slaughter Swamp where it was treated by the poisoned waters of Indian Hill. He emerged sometime later as the quasi-zombie Solomon Grundy and befriended Edward Nigma (Cory Michael Smith) despite their previous animosity. Things seemed to be okay until Tabitha fought Grundy and heard him call her “Tabby.” She eventually captured him and beat him senseless in the hope Butch’s personality would reemerge. After bashing him repeatedly with a lead pipe for hours, Tabitha gave up and said her goodbyes to Butch. Or, at least, his undead Grundy form.

Then he woke up, seemingly cognizant of his life as Butch once again and asking “What happened to me?” It is unclear if he has his memories as Grundy, but it is easy to imagine Nigma might be in a riddle of hurt very soon. 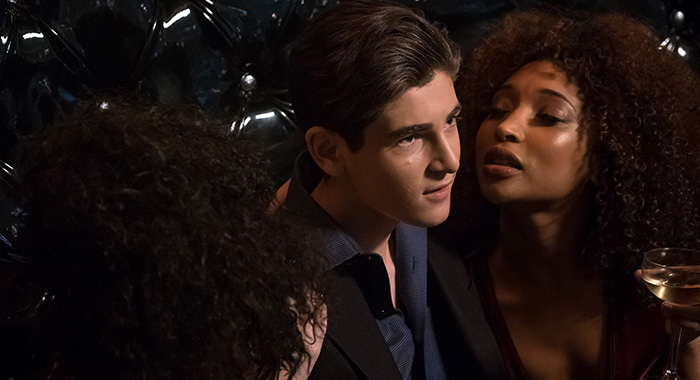 Seemingly answering the question of Bruce Wayne’s legendary status as a “millionaire playboy,” Gotham took young Bruce (David Mazouz) away from the mission and into a world of women, drink, and acting out. With his early attempts at protecting the streets stymied and the ever-present threat of becoming Ra’s Al Ghul’s (Alexander Siddig) heir — to say nothing of actually putting the man out of his 2,000-year-old misery — Bruce went in the opposite direction of his earlier pursuit and chose to live for the moment. And, honestly, after losing his parents, confronting their killer, facing Jerome (Cameron Monaghan), and the prophecy of the Demon’s Head, the guy deserves to live a little. Even if Alfred (Sean Pertwee) is correct in pointing out Bruce’s obvious depression.

Unfortunately for Bruce, there’s a newly regrown Poison Ivy (Peyton List) coming his way who may have an interest in ending the party. And if recent promos are any indication, their interaction may lead Bruce to his fateful midnight meeting with a bat.

Alfred on the Outs

As a result of Bruce’s wild ways, Alfred Pennyworth is no longer Bruce’s guardian, trainer or most trusted confidant. After years of enabling the boy, training him in some SAS skills, and even attempting to teach him the art of disguise, Alfred’s usual level of concern led to a violent row and Bruce getting emancipated. In fact, breaking the Bruce-Alfred relationship may be the boldest move on Gotham yet. Of course, the pair will eventually come to some sort of reconciliation; after all, who will sew the Bat-costumes when the time comes for Bruce to finally don the cape and cowl?

Meanwhile, it will be interesting to see how long Alfred remains persona non grata at Wayne Manor and how he will keep tabs on Master Bruce through his somewhat useful ability to disguise himself. Or will someone emerge from the shadows to prevent the reconciliation? 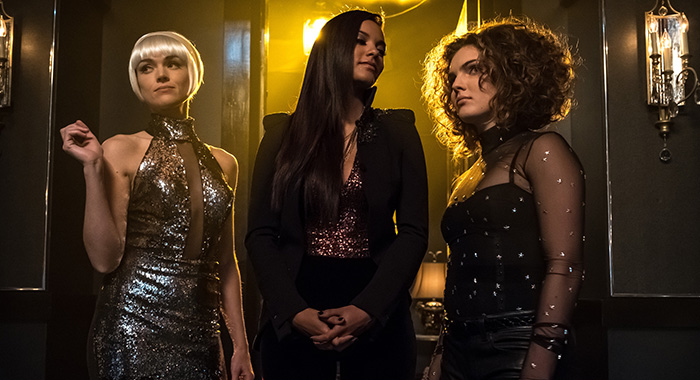 The Sirens do their best, but always seem to come up short. Besides Tabitha’s seeming failure to bring back Butch from within Grundy, the trio’s attempt to become the premiere weapons dealer in town eventually blew up in Barbara’s (Erin Richards) face. Their association with Sofia led to an interaction with Carmine none of them wanted and they all found themselves tied up at one of Penguin’s safe houses.

But things have turned around a little. They managed to escape and Barbara has the Iceberg Lounge back — though expect a name change and a new decor very soon. Maybe that will lead to their operation finally getting off the ground. Or whatever true purpose Ra’s Al Ghul had in mind when he brought Barbara back to life.

Meanwhile, poor Selina (Camren Bicondova) crouches in the background waiting for the respect she deserves. Maybe a few more people need to break her heart before she finally takes that respect for herself.

A Riddle of Love 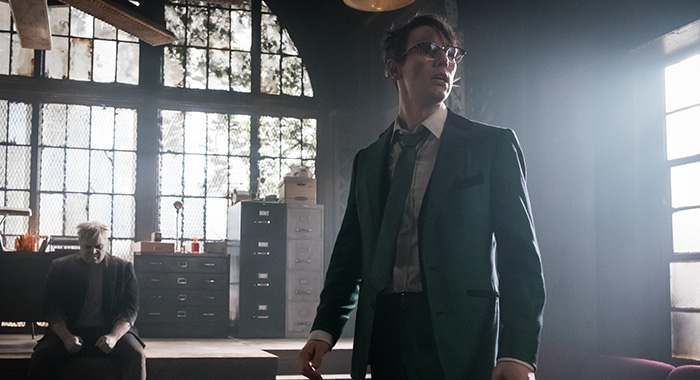 After he was rescued from a block of ice by his No. 1 fan, Nigma faced an even greater problem: his mind was freezer burned and slow with the riddles. His attempt to revenge himself upon Penguin was met with laughter, derision and dismissal. Afterward, he managed to befriend Grundy and had a enough smarts to get him into the underground fighting circuit. There, he ran into Lee Thompkins (Morena Baccarin) who was trying to make amends – of a sort – in the Narrows. After she offered to help Nigma with his brain trauma, he declined because he grew to like his newest persona.

Perhaps, in part, because Lee sort of liked it, too.

But now that he has heart-eyes for her, it is only a matter of time before the Riddler reasserts himself in his mind. In fact, Ed is already facing the Riddler in the mirror. When we last saw him, he commented on Grundy’s perceptive observation that he was mad at himself and left their lair to do something about it. Which persona will Ed choose in the end and what will it mean for Lee? 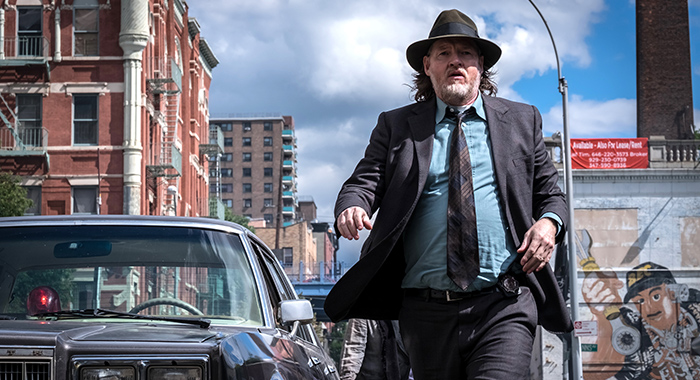 Being captain never really suited Harvey Bullock (Donal Logue), but he was, ultimately, good police. Sadly, he has left the force again. His friendship with Jim has also hit the skids — thanks, in part, to Sofia’s plot — but he has probably rekindled his love affair with cigars, whiskey, and pastrami sandwiches. Like Alfred and Jim, the show has to keep Harvey fairly elastic so he can resume his place in the Batman-era status quo. Granted, the show seems to have the latitude to break certain characters. After all, Lee Thompkins is a far cry from the Leslie Thompkins of the 1990s Batman comics.

Nonetheless, Harvey is also the wild card as Sofia reestablishes the Falcone order in town. Perhaps he can do the things Jim cannot and finally rid Gotham of its organized crime families. Then again, he knows what will follow should that ever happen, so maybe he’ll just join forces with her to irk Jim some more.

A Penguin at Arkham 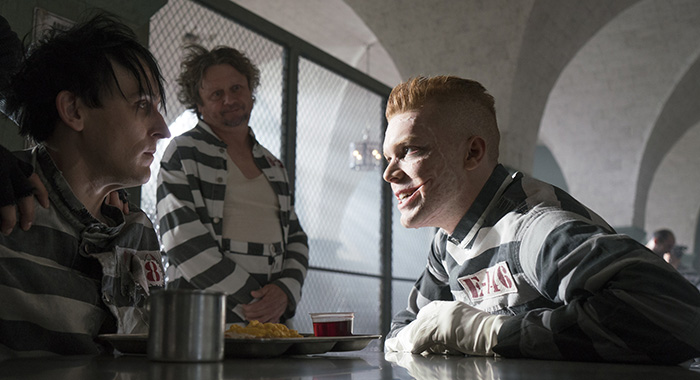 As part of Sofia’s continuing plot, she played Oswald Cobblepot into her hands and into a cell at Arkham Asylum. Noticing that he took a shine to a mute orphan at the Falcone Home and School for Orphans named Martin (Christopher Convery), Sofia arranged for the boy to be kidnapped. Rescuing the boy, he arranged for the child to leave the city while faking his death in the presence of Sofia. For her part, Sofia later used the incident to implicate Penguin in Martin’s death — with a helpful assist from Victor Zsaszs (Anthony Carrigan). The whole affair finally saw Cobblepot dethroned and placed behind bars.

Sequestered in Arkham, his mad ravings led to Jerome, one cell over, making his introductions and offering assistance. It seems the two will be fast friends. At least until one tries to shank the other. Or Jerome convinces him to shank another inmate. But it is only a matter of time before Martin resurfaces to clear Penguin of the crime. And at that point, he will definitely be in a mood to shank Sofia. 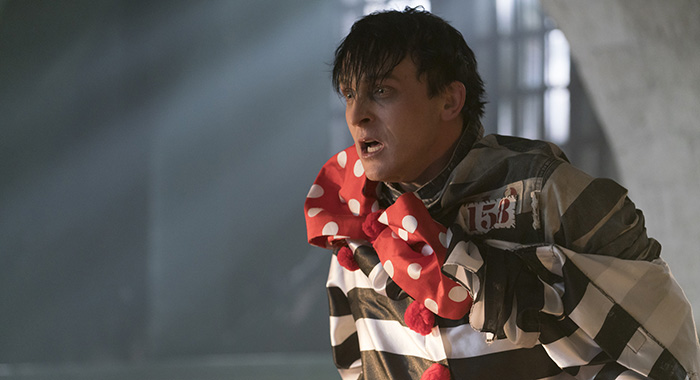 As always, Gotham‘s take on the Batman characters surprises, confuses, and entertains. It is also finding the places it can shatter assumptions about characters like Bruce and Harvey. And knowing the show, a few more hearts, rib cages, and futures will be shattered before the season concludes.