Critics say the Russo brothers-produced rescue mission is relentlessly violent, but it benefits from Hemsworth's talents and a mindblowing single-take action set-piece.

At a time when movie theaters are shuttered, Netflix delivers blockbuster action with Extraction, the feature directorial debut of Avengers: Endgame stunt supervisor Sam Hargrave. The movie is scripted by Endgame co-director Joe Russo and produced by him and his filmmaking partner brother Anthony while Marvel’s Thor, Chris Hemsworth, leads the nearly non-stop fight sequences as a mercenary rescuing a drug lord’s son. Early reviews are mixed, but almost every one highlights a single, lengthy one-take set piece that’s worth the price of subscription.

Here’s what critics are saying about Extraction:

Will action movie fans enjoy it?

If you’re a fan of action films like John Wick, Atomic Blonde, or The Raid then you’ll be more than pleased with Extraction.
– Matt Rodriguez, Shakefire

The constant, spectacular violence [doesn’t] quite rival John Wick’s mirror games or murder-by-library book for creativity but nearly make up for it in casual brutality.
– Leah Greenblatt, Entertainment Weekly

Extraction exhibits an ingenious, sometimes amusingly irreverent approach to action… and it features the most enjoyable scene of a grown man beating up children since Bad Santa.
– Emma Simmonds, The List

This has all the momentum and kinetic violence of a Bourne movie.
– Edward Douglas, The Weekend Warrior

What actually sets the film apart from other mainstream action movies is the sadistic gnarliness of the violence, which appears heavily inspired by Indonesian action flicks.
– Ignatiy Vishnevetsky, AV Club

[The action scenes] will be hard to top this year, even if blockbusters were coming out as normal.
– Ian Sandwell, Digital Spy

How is that one action sequence everyone’s talking about?

It’s a breathtaking and relentless showcase of craft and skill, made all the more impressive by it being done largely in camera with minimal CGI.
– Ian Sandwell, Digital Spy

Would surely have sent a packed house into rapturous applause had the film been released in theaters… Viewers at home might unleash a silent cheer.
– Rohan Naahar, Hindustan Times

It’s an impressive feat, but — like much of this steroidal misfire — the shot is too enthralled by its own capacity for violence to have any real fun with it.
– David Ehrlich, IndieWire

While the choreography does a good job of making Hemsworth look like a badass killer, it’s painfully repetitive — a lot of AK fire, defenestration, and knifing.
– Ignatiy Vishnevetsky, AV Club

We’ve now reached the point where we need to march these long takes behind the back of the barn and put one in the brain.
– David Jenkins, Little White Lies 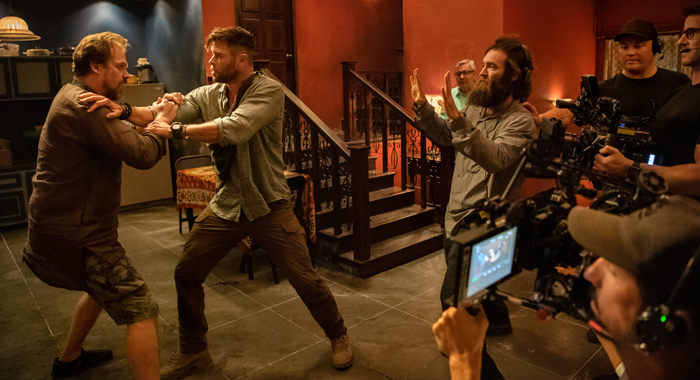 Hargrave blocks and shoots the altercations in such a way that audiences can quickly read what’s happening. Rake fights dirty, but the coverage is clean, emphasizing what an efficient improviser he is in the moment.
– Peter Debruge, Variety

It’s a good thing the film’s geography is so dynamic, because most scenes in Extraction are only differentiated by how people die.
– David Ehrlich, IndieWire

Bathed in a sickly yellow filter from beginning to end, Extraction is often as ugly as its subject matter.
– Chris Evangelista, Slashfilm

Dhaka is made to look suitably anonymous, and the only visual signpost that we’re in Bangladesh is that everything is shot through urine-tinged filters.
– David Jenkins, Little White Lies

How is Sam Hargrave’s directing?

Hargrave has a gift for directing… Frankly, nothing about Extraction looks like a first-time feature.
– Douglas Davidson, Elements of Madness

Hargrave knows to preserve the bodily integrity of his actors and stunt performers, rather than cutting every movement into bits.
– Pat Brown, Slant Magazine

As a director, Hargrave shows more proficiency than personality in the action set pieces, though they are still preferable to the dialogue scenes.
– Ignatiy Vishnevetsky, AV Club

He knows how to craft a strong action scene. The problem is finding a synergy between the action and the story that comes in between, which is where Extraction continually comes up short.
– Matthew Passantino, Big Picture Big Sound 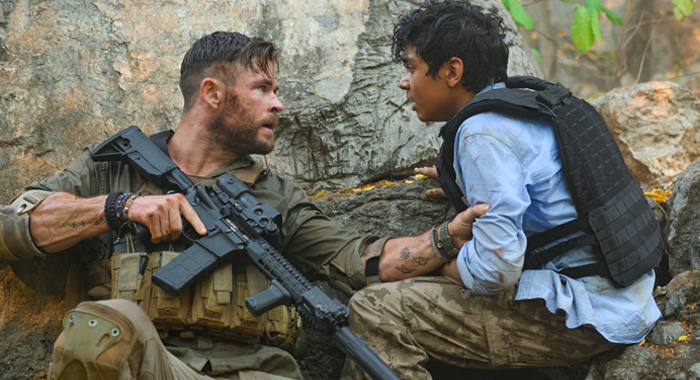 How about the script?

In addition to being a spectacular action film, Extraction also happens to be a well-written drama as well.
– Rohan Naahar, Hindustan Times

The plot feels like reheated leftovers from a hundred other movies about sullen warriors seeking redemption.
– Matt Singer, ScreenCrush

Extraction does get a little bogged down by its story… Regardless, the story is ancillary to the action, which Extraction more than delivers on.
– Matt Rodriguez, Shakefire

The premise is pretty thin… Still, Extraction is about 90% action, so if the drama doesn’t work, you’re still left with a lot that does.
– Chris Bumbray, JoBlo’s Movie Emporium

Is it a big departure for the Russos?

It’s fitting that so many Marvel people are involved because Rake is a nearly unstoppable one man army and while there are no superpowers, he practically is superhuman.
– Matt Rodriguez, Shakefire

This may be the closest you’ll get to super-heroics for a while and it’s a pretty solid substitute.
– Emma Simmonds, The List

The hyperbolically skilled soldier who brutalizes dozens of ragtag gangsters in a rundown apartment building essentially performs the same feats as the superhero dispatching hundreds of CG creatures in a crumbling city—and is borne no less of childish fantasies about the order of the world.
– Pat Brown, Slant Magazine

Joe Russo’s screenplay is lean, but the manner in which the plot is structured — streamlined yet brimming with backstory — feels both classic and very comic booky.
– Rohan Naahar, Hindustan Times 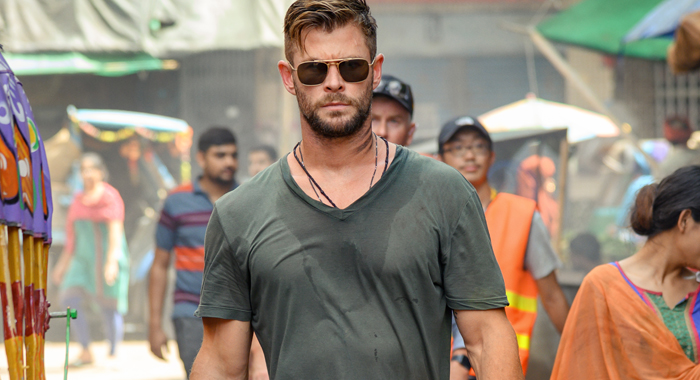 How is Chris Hemsworth?

Hemsworth proves he can grimace while double-tapping assault rifles with the best of them.
– Pat Brown, Slant Magazine

Honestly, of the performances we’ve seen from Hemsworth, this might be his best.
– Douglas Davidson, Elements of Madness

Hemsworth has clearly found his stride as an action hero when not playing Thor… I definitely like Hemsworth more as an actor than others who may have played this sort of role, such as Bruce Willis or Jason Statham, etc.
– Edward Douglas, The Weekend Warrior

While Extraction certainly takes advantage of Hemsworth’s godlike physique, it wastes the boyish charm that made his presence in Thor: Ragnarok and Ghostbusters so likable.
– Clarisse Loughrey, Independent

It’s just fun to see Hemsworth dropping F-bombs and taking part in brutal action that would never been seen in the MCU.
– Ian Sandwell, Digital Spy

Are there any other standouts in the cast?

Rudhraksh Jaiswal impresses as Ovi in his first major role and Randeep Hooda gives all he’s got as Saju, a character who’s put through the wringer more than any other.
– Patrick Cremona, Radio Times

David Harbour shows up as one of Tyler’s old buddies and makes the most of an extremely limited role. We’ve seen Harbour play this type of character before, but he’s still fun to watch.
– Chris Evangelista, Slashfilm 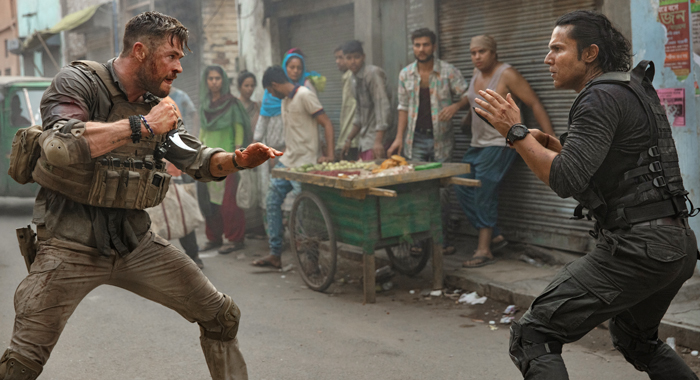 What are the film’s major issues?

It’s a vision of foreign brutality treated as wholly interchangeable, without the weight of political or social consciousness.
– Clarisse Loughrey, Independent

It would be wrong to call this film nihilistic, but it’s also so unconcerned with collateral damage that it begins to border on irresponsible.
– Chris Evangelista, Slashfilm

Is it a worthy substitute for going to the movies right now?

Without question, Extraction is the theatrical experience audiences have longed for since cinemas shut down, and it’s available right in their homes.
– Douglas Davidson, Elements of Madness

Every bit as entertaining as the equivalent pyrotechnic offering from a theatrical motion picture studio might have been.
– Peter Debruge, Variety

It’s that rare Netflix movie where you really wish you could have seen it on the big screen as it’s blockbuster-level action.
– Ian Sandwell, Digital Spy

I would have loved to see this on the big screen… It’s just so much more fun seeing movies like this one with an audience.
– Edward Douglas, The Weekend Warrior

Would I recommend someone pay $15 to see Extraction in a movie theater? Probably not… Netflix offers you the ability to really savor that one great action sequence.
– Matt Singer, ScreenCrush 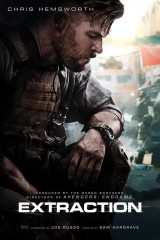 #1
Adjusted Score: 81398%
Critics Consensus: Spectacular stunt work and an electric performance from Chris Hemsworth can't save Extraction from being dragged down by its aimless violence.
Synopsis: A black-market mercenary who has nothing to lose is hired to rescue the kidnapped son of an imprisoned international crime... [More]
Starring: Chris Hemsworth, Patrick Newall, Rayna Campbell, Shivam Vichare
Directed By: Sam Hargrave