Feast your eyes on the exclusive first-look images then learn how Academy Award-winner Ruth E. Carter brought "royal fire" to the costume department and Arsenio Hall's surprising inspiration for Semmi. 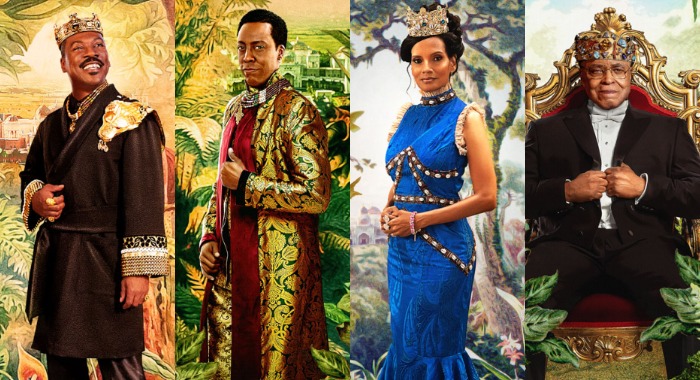 In the month leading up to the release of Coming 2 America, the three-decades-later sequel to the Eddie Murphy classic, Amazon Studios is inviting fans to “Meet Your Majesties” by unveiling new character posters from the movie every Monday. ­­And the studio has given Rotten Tomatoes an exclusive first look at four stunning character posters kicking off the campaign.

The new images feature regal, gilded portraits of the leaders of Zamunda: Murphy as King Akeem; James Earl Jones as his father, King Jaffe Joffer; Shari Headley as ­­­the queen from Queens, Lisa; and Arsenio Hall as royal advisor and the king’s bestie, Semmi – still a target of scorn from the elder royal, despite a significant style glow-up.

The new film sees Akeem again traveling to New York, this time to collect an illegitimate son – and potential heir – and bring him back to Zamunda. How the son, played by comic, actor, and writer Jermaine Fowler, came into existence is something we won’t spoil here. 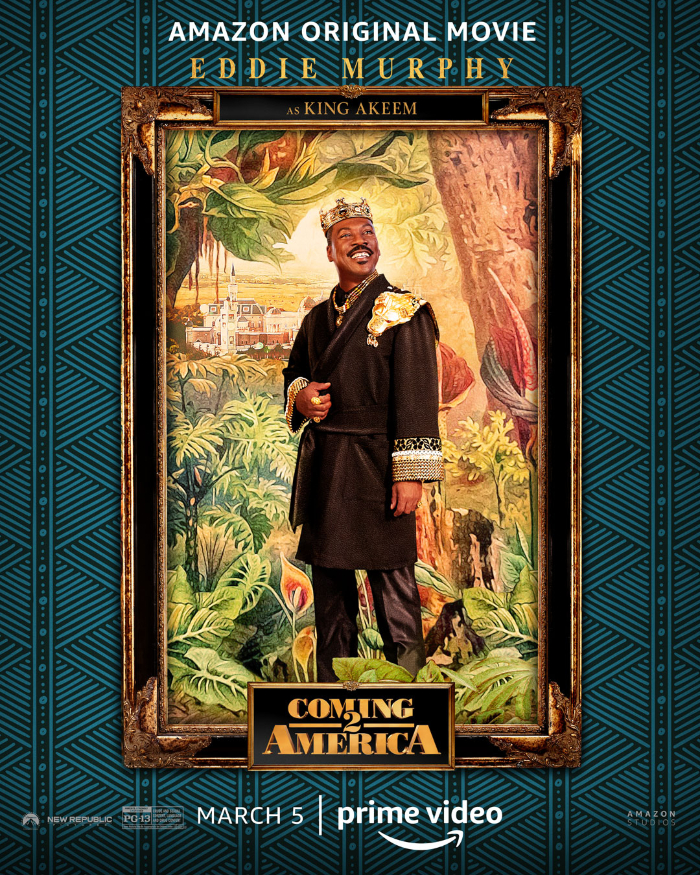 The most immediately striking aspect of the new images are the extraordinary costumes, which are more elaborate and embellished than what we saw in the original film. They come courtesy of costume designer Ruth E. Carter, who won an Oscar for her work on Black Panther and collaborated with Murphy and Coming 2 America director Craig Brewer on Dolemite Is My Name.

Carter says she wanted to show that Akeem and Semmi were more established and had grown in the years since we met them. “The characters that I find were the most challenging were the ones really trying to keep the story of Prince Akeem and Semmi, those that we knew from the first movie,” Carter says. “We needed to stay within that story so that we recognize them, but also give them a little bit more position.” 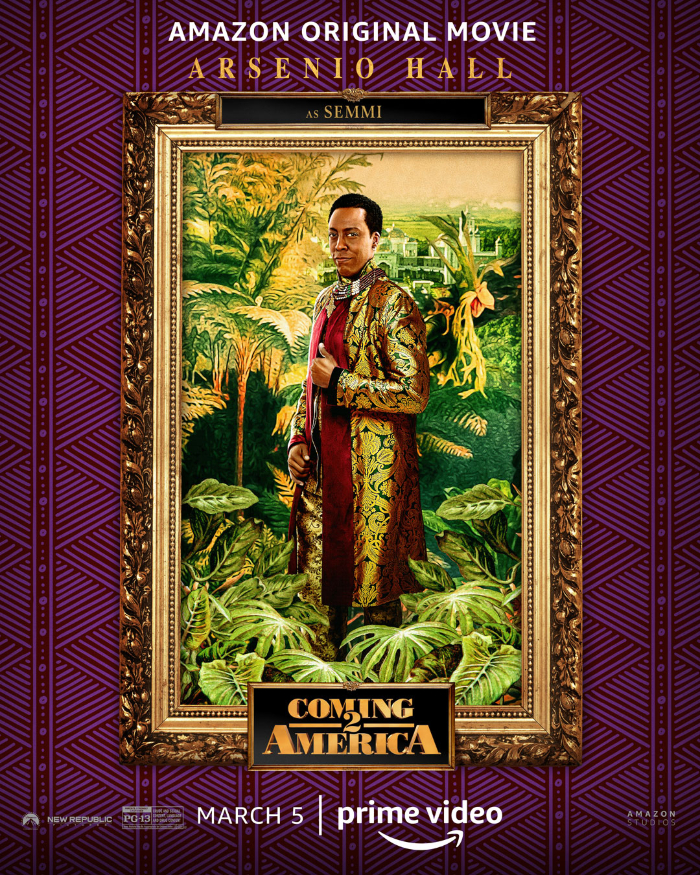 Hall’s Semmi, who wears an intricately detailed golden coat in the new poster, has changed perhaps more than anyone (though he still sports his trademark grin). “Semmi isn’t the same guy,” Carter says. “After 30 years he has grown in his status in the court, in the family. The king still hates his guts, but he probably has a bigger staff and greater responsibilities. I wanted to bring him up a notch, and that was challenging.”

“Ruth is a genius!” Hall says of working with Carter. “And I don’t even know how to describe that in detail, but genius says it all.  She’s the Katherine Johnson of costuming: An amazing eye, taste, and imagination. I’m a guy who always wears gray and black, when I have my choice. Gray and black is easy to coordinate.  But Ruth brought royal fire to Semmi’s wardrobe.” 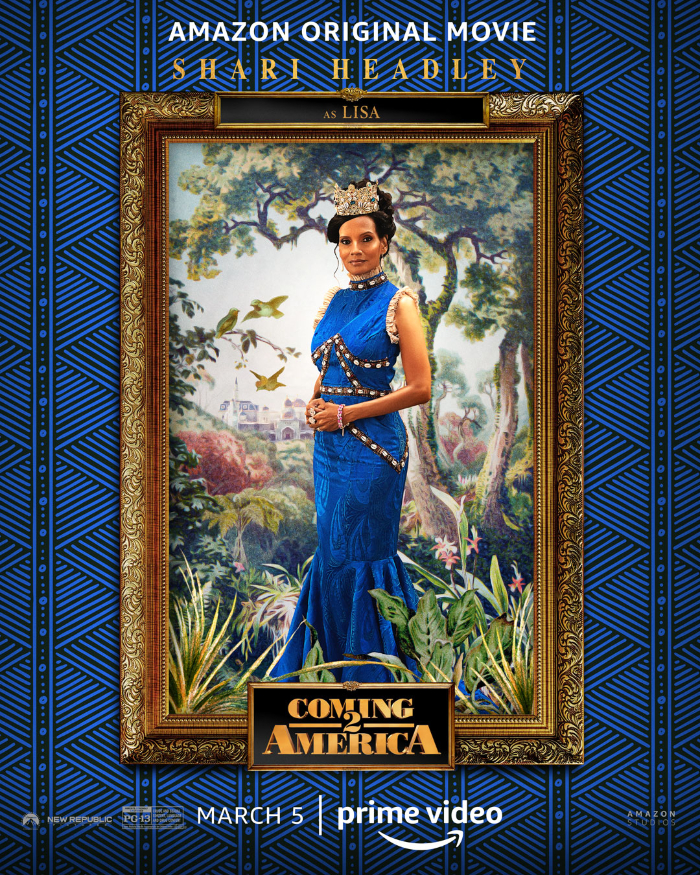 Hall says he loved walking into his trailer and discovering what Carter had waiting for him. “There were gold neck pieces, amazing crossbody chains, hats from the motherland, cream-color suits, and the official palace red socks, with spectacular matching shoes,” he says. “She was great at further developing what Semmi should look like today. Whether it’s my pimp character in Black Dynamite, or Semmi in Coming 2 America, Ruth E. Carter never misses.”

Hall also loved stepping back into the role of Semmi. “I love playing Semmi because he is so totally different than me,” he says. “Semmi is loyal and would kill for Akeem, but every other characteristic about Semmi is less than flattering. He is a self-centered, materialistic, immature, womanizer who loves Africa, and believes that America is a s–thole country.” 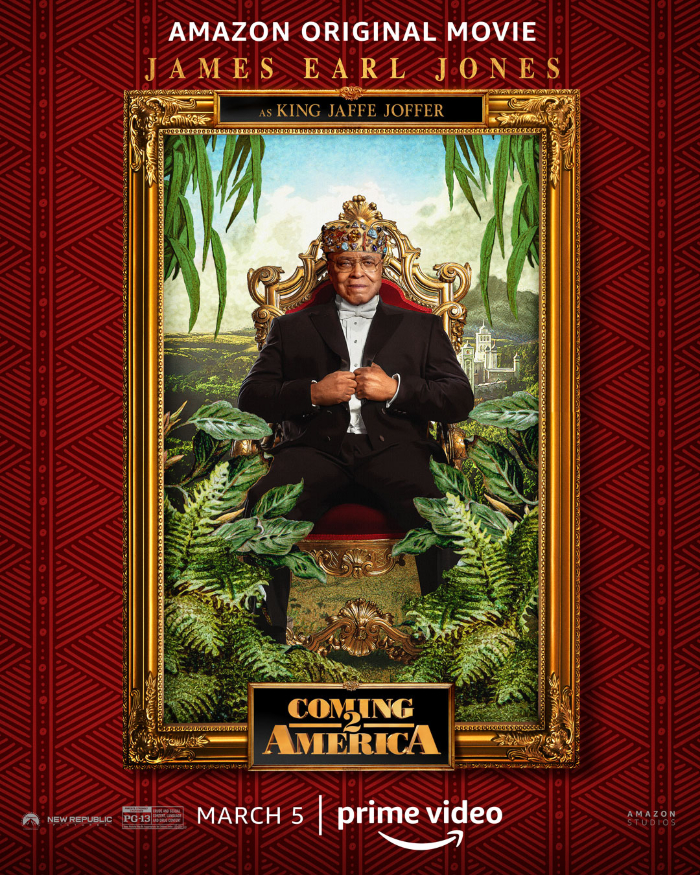 The inspiration for Hall’s take on the character might surprise some viewers. “When I was a kid, I used to watch a show called Leave It To Beaver – Google it millennials! – and I always channel Wally’s best friend Eddie Haskell when I’m playing Semmi. That guy who is always around the crib, yet his presence is annoying to everyone. Semmi is the palace punching bag.”

From all indications in the trailer, that’s something about Semmi that hasn’t changed.