J-horror vet Takashi Shimizu and stars Amber Tamblyn and Arielle Kebbel presented an all-new trailer for their upcoming pic, "The Grudge 2" — and shared a few story tidbits with the audience, revealing just how much Sarah Michelle Gellar there is in the scary sequel.

But before turning to Shimizu and his starlets for "The Grudge 2," Columbia/Screen Gems screened their trailer for "The Covenant," a supernatural teen thriller coming out in September.

Curious about the next installment of family-fun action in "The Grudge 2?"

In what looks like “The Craft” for guys, the story centers around four teenage descendants of a centuries-old group of families with supernatural powers, whose relatives formed a “covenant” hundreds of years earlier to banish a fifth power-hungry family. As we see in the trailer, these modern-day warlocks rule the school in “O.C.” fashion – using their powers to levitate short skirts on hot girls, for example. When the new guy at school turns out to be a vengeful descendant of the fifth, banished family of sorcerers, the foursome (led by the handsome, young-Billy Zane-look-alike Steven Strait) must battle it out with him using all manner of magic.

Given that premise, the trailer looks surprisingly impressive. Sure, there’s the requisite over-stylized unsupervised teen party on the beach, and the making out in cars, but there’s also some cool special effects that make the action exciting to watch (at least in the trailer). The young warlocks throw fireballs, and hurl trash cans at each other with levitation. They use magic to levitate their Hummer over a cliff for kicks on a joyride. In the trailer’s closing moments, main dude Caleb (Strait) is startled by a conjured spook while driving, and swerves into an oncoming semi-truck – the car shatters on impact, then reassembles seconds later on the other side of the truck, car and driver intact. At Comic-Con, the audience breathed a collective “wow.” Did I mention Renny Harlin directs?

But on to the main event. Shimizu was introduced to the stage by pal and “Grudge 2” producer Sam Raimi, who then brought out Amber Tamblyn (“Joan of Arcadia”) and co-star Arielle Kebbel (“John Tucker Must Die”). Shimizu, of course, directed 2004’s “The Grudge” as well as the Japanese original versions, “Ju-On” and “Ju-On 2” (amazingly, two even earlier video-only versions of “The Grudge” bring Shimizu’s “Grudge” film tally up to six, with a third Japanese-language sequel forthcoming).

You’ll find out what happened to Karen (Sarah Michelle Gellar) after "The Grudge," in "The Grudge 2"

The trio presented the world premiere of footage from “The Grudge 2,” in the form of a creepy, tension-filled extended trailer. Fans of the first American “Grudge” will recognize a few returning characters like scary Japanese hair-ghost Kayako, scary little Japanese boy ghost Toshio, and Buffy the Vampire Slayer. Yes, Sarah Michelle Gellar is back, but as the trailer quickly reveals, she ain’t sticking around too long.

It turns out that after the end of “The Grudge,” caretaker Karen Davis (Gellar) became afflicted with the curse, and now lays coma-like in a hospital bed. Her sister Aubrey (Tamblyn) arrives in Tokyo to find out what happened, and Karen jolts up to warn her, “Don’t go in that house!”

Soon enough, Karen is dead – suicide, perhaps? – and we see her laying on the ground, a pool of blood seeping from her head. Aubrey says, “My sister is dead. Why? What do you want?”

We see flashes of scary “Grudge” faces. A Japanese guy (Edison Chen) is developing photos in a darkroom when he notices something in a picture; he leans in closer to the pan, and the scary “Grudge” girl leaps out of the pan, grabbing his head. Freaky!

Next, we see scenes of mousy brunette schoolgirl Allison Fleming, who sees the scary little Japanese boy under her desk during class. We also see Allison standing, black hair growing superfast down her body as she watches, frozen in horror.

The trailer ends with the scary little ghost boy, with a red number 2 in his eye.

In a session with the press, Tamblyn and Kebbel revealed more about the movie, the story, and their characters (and Tamblyn confirmed that Gellar’s character Karen does indeed die):

Instead of taking its story from “Ju-On 2,” “The Grudge” and “The Grudge 2” serve as part one and two of the story from the first “Ju-On.”

There will be three separate storylines, each involving Aubrey, Allison, and Trish (Jennifer Beals), and all will eventually interconnect.

Aubrey, following her sister’s death, goes to investigate the “Grudge” house; along the way, she learns of other cases involving the curse and its victims.

Allison is the new girl at the International High School in Tokyo. She is ugly and unpopular, and the cool girls play a trick on her by pretending to befriend her. They take her to the cursed “Grudge” house to scare her, which brings out the curse.

As with the other “Grudge” films, “The Grudge 2” will bear director Shimizu’s signature filmmaking style, with non-sequential time order, quick cuts, psychological rather than gory scares, and a story that makes the audience think a lot to figure it out.

Tamblyn also joked to watch out for a dance scene with Kebbel and Takako Fuji, who plays the frightening ghost girl, Kayako.

"The Grudge 2" is directed by Shimizu with a screenplay by "The Grudge" (2004) writer Stephen Susco, and hits Halloween-time theaters on October 13. 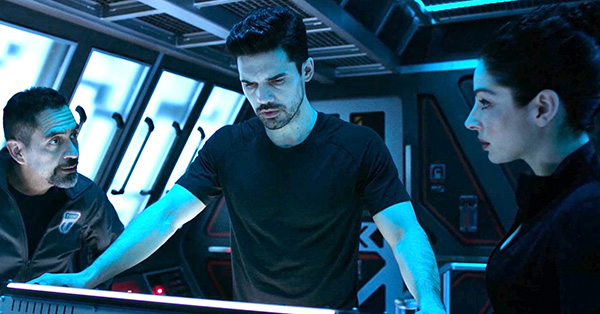