Chilling Adventures of Sabrina First Reviews: A Dark Heroine for a New Generation 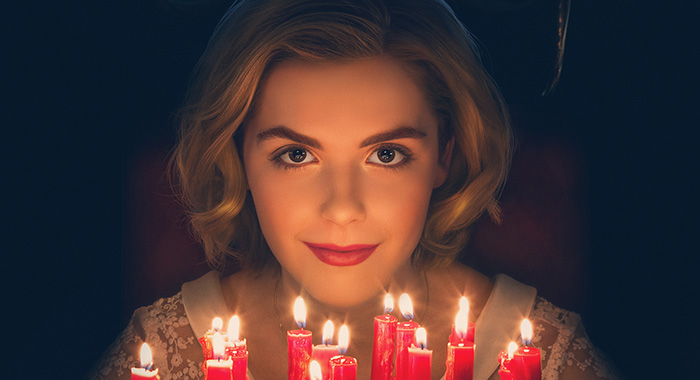 A few may have cried “Sacrilege!” when TV super-producer Greg Berlanti and Riverdale showrunner Roberto Aguirre-Sacasa threatened to makeover magical teen darling Sabrina, the Teenage Witch — a career-defining role (for better or worse) for star Melissa Joan Hart. But naysayers needn’t worry: This is not your mom’s Sabrina.

Kiernan Shipka (Mad Men) inhabits the titular role in Netflix horror offering Chilling Adventures of Sabrina, a version of the Archie Comics title that finds Sabrina Spellman in a much darker universe, one that is closer in tone to Rosemary’s Baby than the perky 1990s teen witch some might remember. Even the introduction of Sabrina’s “familiar,” a demon who takes animal form — in Salem’s case, a black house cat — is sufficiently scary to advise against the youngest viewers tuning in.

The series opens as Sabrina approaches her 16th birthday, a time when, tradition in her family of witches dictates, she must sign the Book of Night, become Satan’s bride, and inherit vast powers. This rebellious teen has other ideas, however; she’s half mortal and wants to continue life with her Baxter High classmates, including boyfriend Harvey Kinkle (Ross Lynch) and friends Roz Walker (Jaz Sinclair), and Susie Putnam (Lachlan Watson). Her cousin Ambrose (Chance Perdomo), under house arrest for illegal witch activities, tries to temper Sabrina’s more radical plans, while her aunts Hilda (Lucy Davis) and Zelda (Miranda Otto) manage the fallout when Sabrina inevitably chooses her own ill-informed path. Richard Coyle appears as Father Blackwood, the sinister head of the Church of Night and its magical Academy of the Unseen Arts, while Tati Gabrielle‘s Prudence leads a trio of bitchy witches, the Weird Sisters.

The horror, suspense, and wicked mayhem from Shipka and her stellar costars — especially devilishly delightful Davis, Otto, and Michelle Gomez — are exactly what’s called for this time of year, and critics so far heartily approve, branding the series 94%  Fresh with 17 reviews so far (updated). Here’s more of what they had to say:

Chilling Adventures of Sabrina more than lives up to its title — sometimes too well, as when spells go awry and the nights are stalked by demons, ghosts, and zombies.

With plenty of scares and heaping helping of style, Chilling Adventures of Sabrina is a wicked and wonderful concoction. — Julia Teti, The Playlist

Chilling Adventures of Sabrina will still give you moments of comic relief, but the dichotomy between Sabrina’s mortal and witch identity is far weightier here, offering true moments of horror and macabre developments. — Arusa Qureshi, The List

Those of us who enjoyed the perkier version from our youth will tune in out of curiosity, while a new generation of Netflix junkies can take this sexier, more sinister version at face value. — Isabel Mohan, Daily Telegraph (UK)

Is Shipka’s Sabrina Up to Snuff? 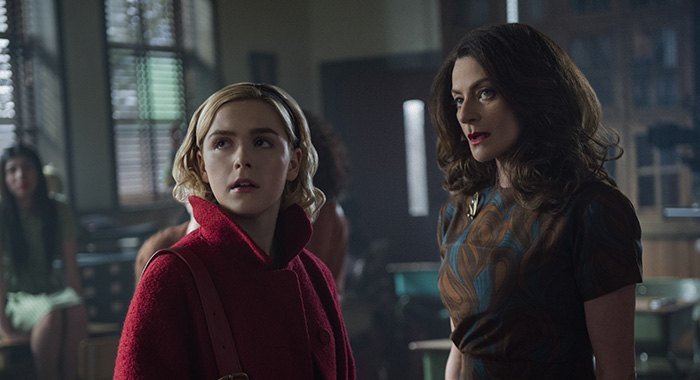 Critics are not scared of this casting. They also offer high praise for Shipka’s costars.

Star is Kiernan Shipka, Sally from Mad Men, and she brings an appealingly sincere touch as she mixes phrases such as “dark baptism” into her teen lexicon. Her aunts, played by Miranda Otto and Lucy Davis, are kooky excellence. — Matthew Gilbert, Boston Globe

Kiernan Shipka leads the series with growing confidence … By the end of the first season, Shipka has more than lived up to the teen hellion promise of her famous Mad Men role — but as Sabrina, she’s far more empowered to revolt against regressive social conventions … Perdomo [gives] his pansexual character a slinky, almost feline energy … [W]hen Gomez, who was once menace incarnate on Doctor Who, finally comes out of the periphery, Chilling Adventures becomes spellbinding. — Danette Chavez, AV Club

The cast is a big perk — Lucy Davis and Miranda Otto, in particular. — Ben Travers, indieWire 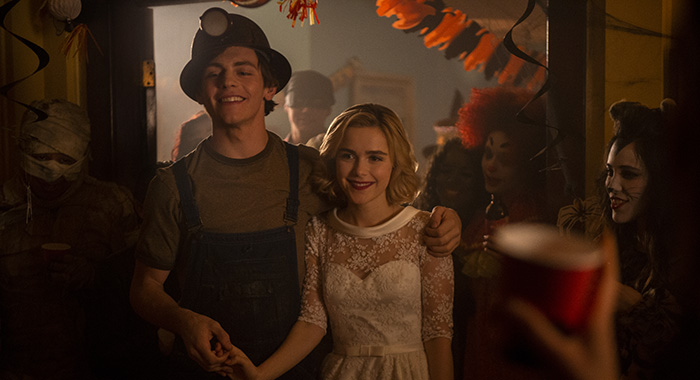 No tricks here. While a few critics didn’t shine to the more teen-melodrama moments of the show, most acknowledged that the series is a bingeable treat.

Sabrina mixes genres and offers believable performances, creative conceits and, duh, magic. The drawback is that you must endure the monotony of its more mundane story lines to get to the truly bewitching bits. — Brandon Katz, Observer

Loaded with great production design, and blessed with several strong performances, Chilling Adventures of Sabrina none the less succumbs to exhausting exposition, and uneven storytelling. It might still cast a spell over you, though. — Chris Evangelista, Slashfilm

The series is skilled at building tension and leaves us eager to learn more about the spooky world of its protagonist. — Brian Lowry, CNN.com