Critics say the Russo brothers' latest collaboration with the MCU's Spider-Man tries to do too much and doesn't quite accomplish enough, but its star is brilliant.

Marvel directors Joe and Anthony Russo (Captain America: Civil War, Avengers: Endgame) reunite with current Spider-Man actor Tom Holland for Cherry, an ambitious drama that proves they’re interested in a lot more than just epic superhero blockbusters. Does the effort pay off, though? The first reviews of the new film are mixed on the success and failure of the adaptation, which chronicles the stacked, lengthy story of a young man through his experience in the Iraq War and then his subsequent drug addiction and criminal exploits. Holland comes out on top for most critics, though, even including those with negative reactions overall.

Here’s what critics are saying about Cherry:

Do the Russo brothers have another hit on their hands?

A masterclass in filmmaking… It’s all too easy to throw the word ‘masterpiece’ around, but Cherry deserves it.
– Josh Wilding, ComicBookMovie.com

This is a consistently engaging flick… likely to be one of the more underrated titles of 2021.
– Joey Magidson, Awards Radar

Powerful… It may not be perfect, but it is close.
– Tessa Smith, Mama’s Geeky

It doesn’t succeed as a war film, as a heist flick, or the star vehicle it so craves to be for Holland. It’s just average at its core.
– Robert Daniels, The Playlist

Cherry is prime contender for one of the worst films of the year.
– Jeffrey Zhang, Strange Harbors

Should they stick to the comic book stuff?

It proves that there’s much more to Joe and Anthony than just capes, shields, and special effects.
– Josh Wilding, ComicBookMovie.com

The Russos are better moviemakers than their Marvel movies allow them to be. They demonstrate that here.
– Glenn Kenny, New York Times

The main takeaway of Cherry is that being able to make a good superhero film doesn’t mean you can direct a good war and crime drama.
– Nicole Ackman, Next Best Picture

There may not be a shallow CG background this time, but there’s a shallow narrative.
– Spencer Perry, ComicBook.com

I admire the Russos for trying to take on material that’s drastically different from everything else in their filmography. But Cherry is a movie that quickly gets away from them.
– Matt Goldberg, Collider 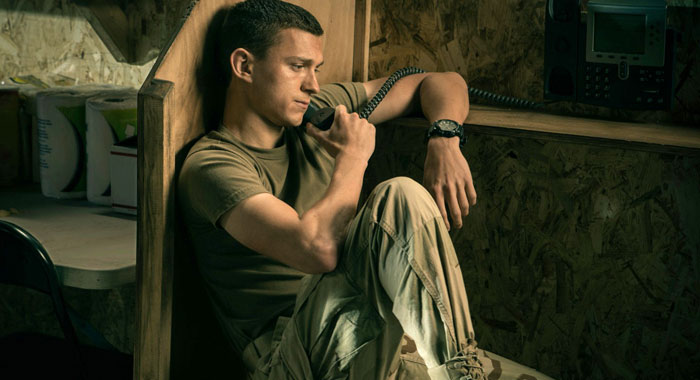 How is their directorial style here?

There’s a lot of style and skill on display and despite the dark subject matter, it means Cherry is a visually entertaining watch.
– Ian Sandwell, Digital Spy

Here we have a movie that succeeds wildly due to the Russos’ creativity… They employ all manner of tricks, as well as some incredibly clever choices.
– Joey Magidson, Awards Radar

There are some incredible uses of the camera here… It feels a lot like the filmmakers wanted to experiment and try some new things.
– Josh Wilding, ComicBookMovie.com

You might not think of them in the same breath as the auteur directors of our times. But they graduate to that class here, giving the film its own unique narrative and visual style.
– Joey Morona, Cleveland Plain Dealer

Cherry is showy and immature. The directors’ stylistic choices are not only jarring, they often undercut moments of emotional heft by distracting the viewer and taking them right out of the moment.
– Laura Potier, Outtake Mag

Chucking aspect ratios, needle-drops, and tricks of style into a blender doesn’t equal a good movie, but it looks like nobody wanted to tell the Russos post-Endgame.
– Jeffrey Zhang, Strange Harbors

How is it as an adaptation of Nico Walker’s book?

The book was celebrated as a gritty generational rallying cry. The Russo brothers, working in a style of troweled-on extravagance, inflate it into a showreel.
– Owen Gleiberman, Variety

Cherry seems to rush through so much of the minutia of the novel which inspired it that it just feels like checking boxes.
– Matt Oakes, Silver Screen Riot

In trying to tell everything, there’s a lack of focus and connectivity.
– Ian Sandwell, Digital Spy

Over-stylized and overstuffed to a fatal fault, Cherry takes its source material’s aware self-loathing and transforms it into a shallow music video.
– Jeffrey Zhang, Strange Harbors 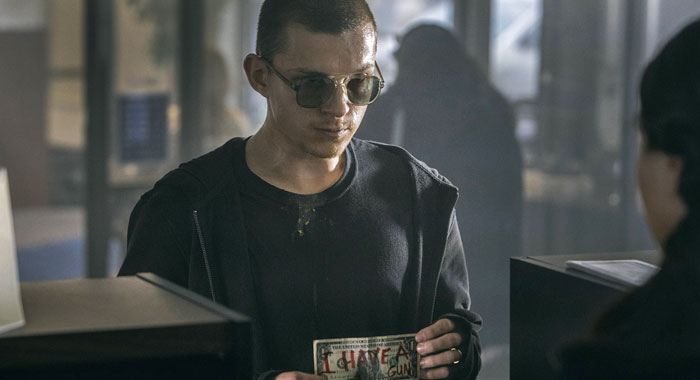 How is the script on its own?

The screenplay by Jessica Goldberg and Angela Russo-Otstot is rock solid, in an old-fashioned way.
– Joey Magidson, Awards Radar

Perhaps the sign of a script that is bloated and thick, there are also times Cherry feels like parody.
– Spencer Perry, ComicBook.com

Miss a piece of the action because you were checking Twitter? Don’t worry, the ceaseless, incessant narration will fill you in!
– Chris Evangelista, Slashfilm

It becomes obvious that there is no overarching vision for what this film is about or who it is for.
– Leigh Monson, WhatToWatch

The Russos and their writers simply didn’t know how or where to cut Walker’s story down. The movie lacks focus.
– Hope Madden, Columbus Underground

Is the film’s length an issue?

The story doesn’t really kick in for about 80 minutes. It’s a good story, but does not require as much setup as its given.
– Fred Topel, Showbiz Cheat Sheet

One of the biggest faults with this movie is how long it is.
– Tessa Smith, Mama’s Geeky

It has an overly-long runtime which drags a little during the lead up to the third act.
– Ben Rolph, Discussing Film

At two hours and twenty minutes long, fatigue will likely have already set in by the time you reach its third act.
– Nicole Ackman, Next Best Picture 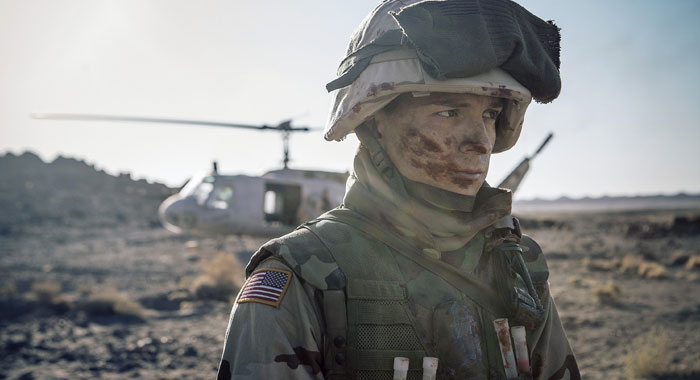 Does it try to do too much?

This movie is basically four movies in one — a romantic comedy, a war film, a drug movie, and a heist flick — which is not necessarily a bad thing.
– Tessa Smith, Mama’s Geeky

The Russos managed to balance everything from teen romance to drug addiction perfectly.
– Josh Wilding, ComicBookMovie.com

It’s a convoluted mess that feels like several different films stitched together into one Frankenstein’s monster of a movie.
– Nicole Ackman, Next Best Picture

While it sounds like a fair idea on paper, the exercise of making these varied tones and concepts doesn’t always work, even within each of the sections.
– Spencer Perry, ComicBook.com

The movie presents itself as a dread-ridden slice of life, yet almost every moment in it feels based not on experience but on the experience of other movies.
– Owen Gleiberman, Variety

What are some of the films it references?

[It’s] a horrendous Scorsese knockoff that fails to understand why that director’s movies work so well.
– Matt Goldberg, Collider

Cherry takes inspirations from Fight Club, Full Metal Jacket, Jarhead, and Requiem for a Dream to put them in a blender for a punishing two hours and twenty minutes.
– Leigh Monson, WhatToWatch

Cherry wants to be Requiem for a Dream and Jarhead and Bonnie and Clyde all at once but manages only to be a haphazard imitation of all.
– Matt Oakes, Silver Screen Riot

Cherry has the beating heart of an indie film wrapped in the sweeping, epic flair of a Quentin Tarantino, Oliver Stone or Ang Lee movie.
– Joey Morona, Cleveland Plain Dealer 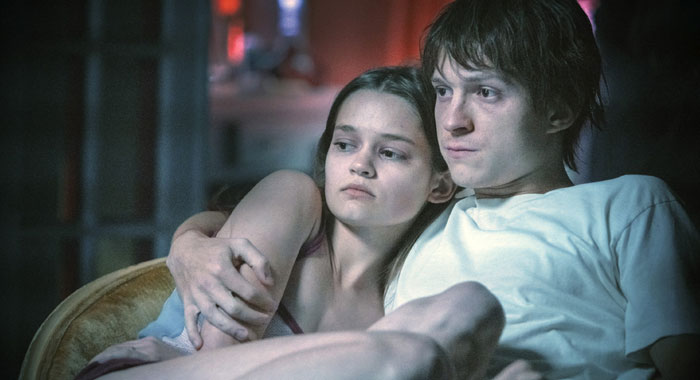 This is certainly Tom Holland’s show, with the writing, cinematography, and editing working in coordinated effort to highlight just how hard Holland’s working to give us this character’s blood, sweat, and tears.
– Leigh Monson, WhatToWatch

Though his ambition is present in every instance, there are times where Holland can’t make the gravity of some moments really land.
– Spencer Perry, ComicBook.com

Because of him, this is a good movie. Without him, I am not sure Cherry would have accomplished what it sets out to do.
– Tessa Smith, Mama’s Geeky

It’s a fine performance but one that will surely be looked back at as a stepping stone, rather than a genuine coming out party.
– Matt Oakes, Silver Screen Riot

He really pushes himself in a wide-ranging and committed performance, holding together a movie that is overambitious and narratively muddled.
– Ian Sandwell, Digital Spy

Does anyone else in the cast shine?

Ciara Bravo, as Cherry’s girlfriend, wife and eventual partner in junkie-dom, is at times the performer who has the strongest emotional hold on the viewer, and the most memorable find here.
– Glenn Kenny, New York Times

Ciara Bravo is a revelation too, presenting the heart and soul of the film.
– Joey Magidson, Awards Radar

Bravo, meanwhile, puts herself on the map here in a huge way and makes one thing clear: she’s a star…we cannot wait to see what she does next.
– Josh Wilding, ComicBookMovie.com

Supporting players, often Black folks, are either enveloped in shadows or have a gun pointed in their faces. The women are even less regarded.
– Robert Daniels, The Playlist 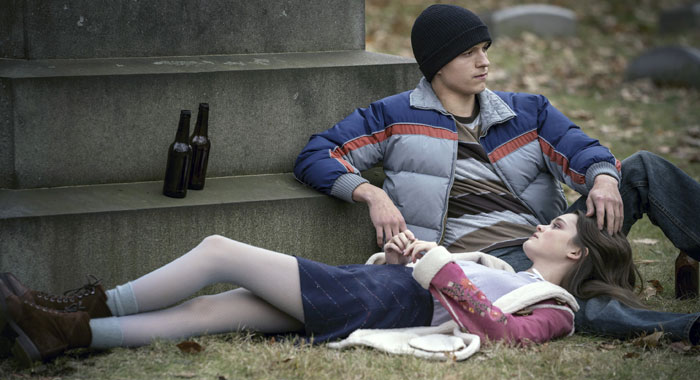 Is it a difficult watch at times?

Cherry is dark, heavy stuff. The graphic violence of war and the raw and ugly reality of addiction make the film uncomfortable to watch at times.
– Joey Morona, Cleveland Plain Dealer

Cherry is raw and difficult to watch at times but the result is a beautifully honest film that is well written and well-cast.
– Allison Rose, FlickDirect

Nothing here feels as gritty as it should. There’s no stark realism, no raw honesty. Everything in Cherry is for show. Subtlety is for chumps.
– Chris Evangelista, Slashfilm

It’s hard to shake the feeling that [the actors are] playing dress-up, a glossy Riverdale rendering of craving and codependence.
– Leah Greenblatt, Entertainment Weekly

Does it ever lighten up?

The most surprising thing about Cherry, and its primary saving grace, is the humor that bleeds throughout it.
– Spencer Perry, ComicBook.com

When Cherry robs banks, the banks have parody names like Capitalist One, Bank F—s America, Credit None, S–tty Bank, or even just The Bank. Ho ho ho, my sides, they’re splitting! Who are you to resist the unparalleled wit of Cherry?
– Chris Evangelista, Slashfilm

Will you want to see it more than once?

This movie will take you on an emotional, powerful journey over the course of 150 minutes you’ll want to relive.
– Josh Wilding, ComicBookMovie.com

I will be watching this again.
– Tessa Smith, Mama’s Geeky