Stunned winners (Jodie Comer, Jason Bateman) and moving speeches were also among the top moments of the night.

The 71st annual Emmy Awards ceremony on Sunday was entertaining in spite of itself. Garish moments and excruciatingly unfunny running commentary threatened to overshadow some stunning upsets and heartfelt speeches. The Fox presentation, which scored a 0% on the Tomatometer on its first reviews, will hopefully go down as a teaching moment: Don’t replace professional hosts with Statler and Waldorf–like heckling. (Actually, the program might’ve gotten away with the discount-hosting format had they hired those grumpy Muppets instead.)

“There were some genuinely shocking and deserving winners,” Caroline Framke wrote for
Variety. “These moments were good enough to almost, almost, distract from the fact that just around the corner from these unscripted reprieves lurked some new cringe-inducing bit.”

Here are the moments that stood out in a night of big highs in a show that set the bar low.

1. The Surprise Dominance of Fleabag and Phoebe Waller-Bridge 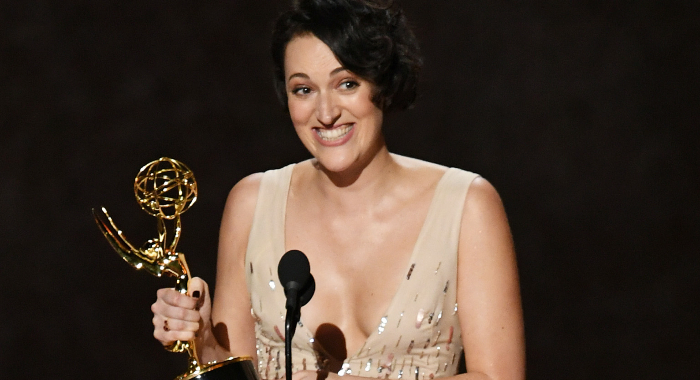 British actress-writer-producer Waller-Bridge was visibly floored when her name was read out as winner for the Outstanding Lead Actress in a Comedy Series category for her work on Fleabag in one of the night’s biggest upsets. Veep’s Julia Louis-Dreyfus, who has won the award six times for her part as Selina Meyer, was the favorite to win for her final season in the role. Waller-Bridge also won for Outstanding Writing for a Comedy Series for “Episode 1” of the Amazon Prime Video series, joining Tina Fey who won both acting and writing awards in 2008 for her work on 30 Rock. Harry Bradbeer won the Outstanding Director for a Comedy Series award for his work on the same episode.  Fleabag also took the Outstanding Comedy Series award over contenders like Veep and last year’s winner The Marvelous Mrs. Maisel. The series also won awards for casting and editing for a total of six Emmys this year. 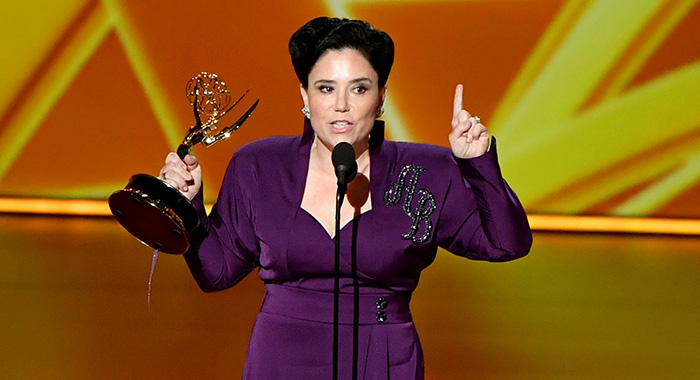 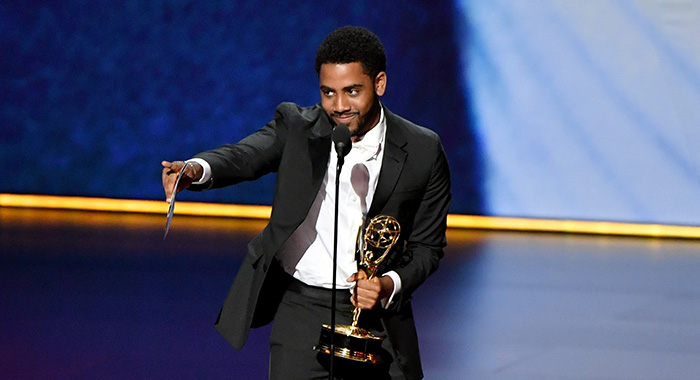 The 21-year-old actor not only defeated some major players in his category, he is also the youngest-ever winner to take home the Lead Actor in a Limited Series trophy. But more importantly, the subjects of When They See Us, which tackled the story of the Central Park 5 (a.k.a. the five teenagers who were wrongfully convicted and imprisoned for a 1989 rape they didn’t commit), were present in the audience as Jerome accepted his award. “This is for the men that we now know as the Exonerated Five,” he said as Antron McCray, Kevin Richardson, Yusef Salaam, Raymond Santana, and Korey Wise (the role Jerome played), who spent years in prison and whose convictions were vacated in 2002, watched on. 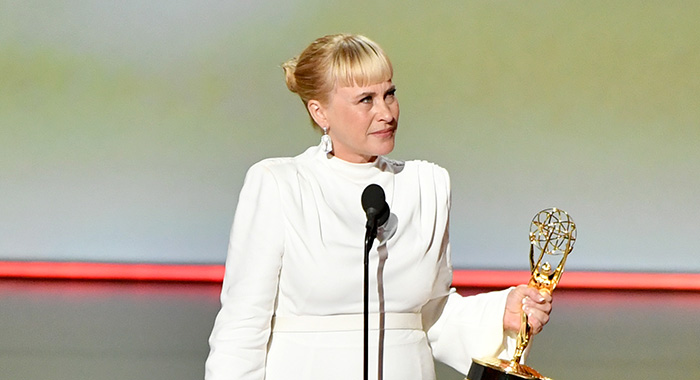 The last time Patricia Arquette won a major award (an Oscar, NBD), she used her time on stage to lobby for equal pay for women. This time, she dedicated her statue for her role on Hulu’s The Act to her late sister, Alexis Arquette, and to trans women around the world.
“I just have to say I’m grateful to be working. I’m grateful at 50 to be getting the best parts of my life and that’s great. But in my heart, I’m so sad I lost my sister Alexis and that trans people are still being persecuted,” she said during in her speech. “I’m in mourning, Alexis, and I will be the rest of my life for you until we change the world, until trans people are not persecuted. And give them jobs. They’re human beings — let’s give them jobs let’s get rid of this bias that we have everywhere.”

5. Billy Porter for the Win! 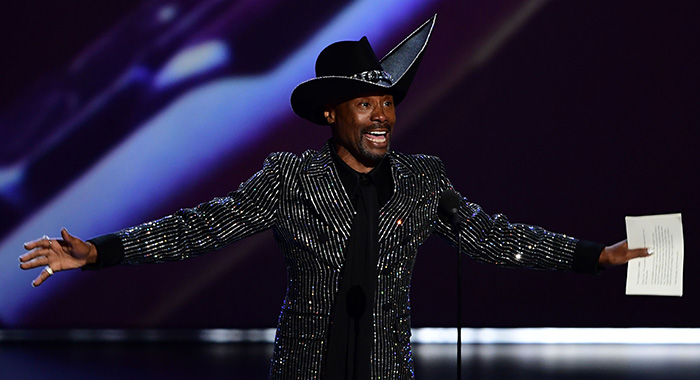 Just a day after his 50th birthday, Porter – who plays fabulous ballroom emcee Pray Tell in FX’s groundbreaking drama Pose – became the first openly gay Black man to win an Emmy for Lead Actor. “The category is ‘Love’!” declared Porter as he took the stage, referencing Tell’s ball-starting catchphrase from the show. Porter went on to say, “We as the artists are the people that can change the molecular structure of the hearts and minds of the people who live on this planet. Please don’t ever stop doing that. Please don’t ever stop telling the truth!” Porter was up against tough competition in the Lead Actor in a Drama category, including Game of Thrones’ Kit Harington and Ozark’s Jason Bateman, who took home an award for directing. 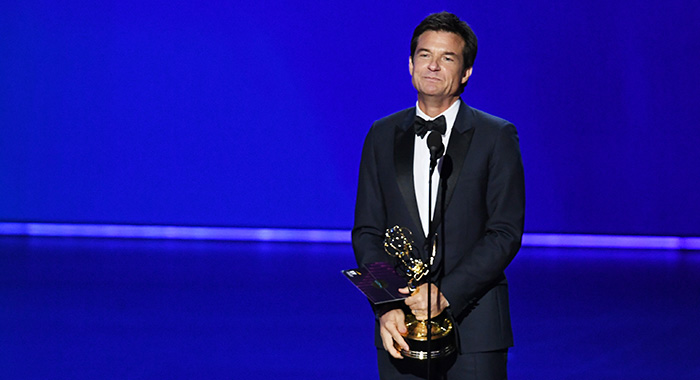 7. Michelle Williams Makes the Case for Equal Pay – And Treatment 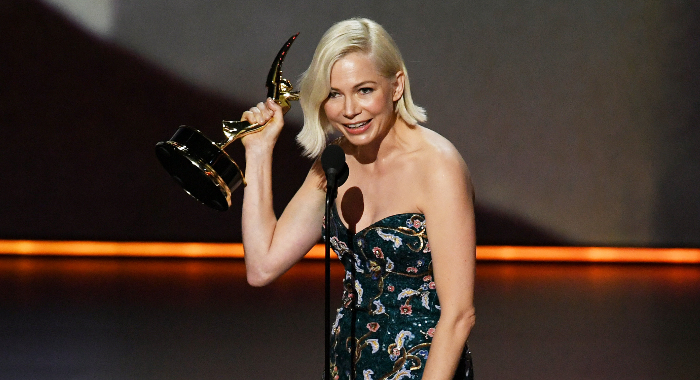 Michelle Williams’ win for playing Gwen Verdon in FX’s limited series Fosse/Verdon was not a surprise – she was the expert’s pick pretty much from the moment nominations were announced. Nor was it necessarily a surprise that Williams used her platform to advocate passionately for equal pay and treatment for women, given she was at the center of an equal pay scandal when she received less than 1% of what All the Money In the World co-star Mark Wahlberg was paid for reshoots following Kevin Spacey’s removal from the film, and that she has been advocating passionately on the issue for years. Yet Williams’ speech struck a chord, painting a picture of a workplace that other shows could aspire to emulate, and it became one of the most universally celebrated moments of the nights.

Williams said: “[On Fosse/Verdon] my bosses never presumed to know better than I did about what I needed in order to do my job and honor Gwen Verdon. Thank you so much to FX and Fox 21 studios for supporting me and for paying me equally, because they understood that when you put value into a person, it empowers that person to get in touch with their own inherent value, and then where do they put that value, they put into their work. And so the next time a woman and especially a woman of color, because she stands to make 52 cents on the dollar compared to their white male counterpart, tells you what she needs in order to do her job, listen to her, believe her, because one day she might stand in front of you and say thank you for allowing her to succeed because of her workplace environment, and not in spite of it.” 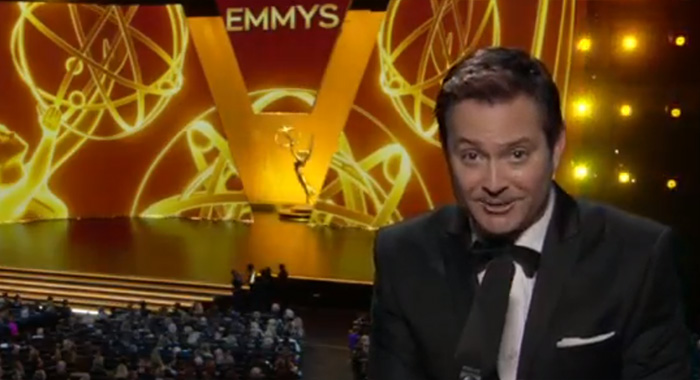 Earning a special place on our best moments list is the best worst part of the show: Lennon’s commentary. The internet exploded with hate for the announcer’s remarks, and at one point, the former Reno 911! star joined them, breaking off a joke to add his own critique, “Are the Emmys woke? Or is that just something that was — this is why people don’t do this, because it sucks.”