“We are cruel, aren’t we?” admits series boss Beth Schwartz about losses in store for Oliver Queen this season.

The Arrow season 8 premiere, “Starling City,” was extremely nostalgic, genre-bending, and emotional for fans of the series. It also serves as an opening salvo in the program’s coda year. But considering its surprisingly cosmic quest, shocking ending, and cutaways to Team Arrow 2.0 in 2040, some in the audience may be wondering what the rest of the season will be like and what the premiere means for the Arrowverse overall. Thankfully, Rotten Tomatoes answered the call to speak with showrunner Beth Schwartz; learning some of the inner workings of “Starling City,” how it relates to Arrow’s final season and the upcoming “Crisis on Infinite Earths” crossover event.

Spoiler Warning: If you haven’t watched the Arrow season premiere, do so now. There are massive spoilers beyond this point.

One of the early ideas Schwartz and the other writers discussed was taking Oliver (Stephen Amell) to Earth-2 to relive a number of moments from the pilot episode. The Flash previously established the Earth-2 Oliver died when the Queen’s Gambit sank, creating the perfect opportunity to deposit Oliver on Lian Yu and experience a déjà vu only the Arrowverse can provide — an exciting prospect for Schwartz and her team.

“It was so perfect because part of this episode was a little bit of It’s a Wonderful Life and ‘What would have happened if Oliver didn’t come back from Lian Yu?,’” she said.

Eagle-eyed watchers may have noticed a few things in the episode’s cold open were different – like a Batman cowl taking the place of Deathstroke’s mask. While Schwartz declined to elaborate on it or the direct mention of Bruce Wayne later in the episode, she thanked the existence of the Batwoman television series for making Gotham City references easier to pull off.

“Now that they’re in our universe, we’re able to get away with a lot more things Batman related,” she explained. Previously, a passing reference to Bruce, Gotham, or its famous vigilante required approvals from several divisions of the WarnerMedia family.

But in remounting the pilot — with the notion that 12 years had passed instead of five — allowed for different story opportunities, including the death of the Earth-2 Thea Queen.

“When Oliver came back [in the pilot], she was a totally different sister than he remembered leaving. She was really heavily into drugs and he saved her on her birthday in Season One,” Schwartz said.

“If he wasn’t there that she probably would have died,” Schwartz explained. “So that was the decision for this episode.”

That key twist on the Earth-1 story set much of the episode’s plot in motion. Thea’s death broke Tommy Merlyn (Colin Donnell), inspiring him to create the Undertaking unseen on Earth-2, but a major plot point in Arrow’s first season.

The Earth-1 Thea (Willa Holland) will recur throughout the season, with Schwartz teasing she will return in a “very cool way.”

As the episode continued to mine key season 1 moments, it eventually found Oliver confronting Felicity’s (Emily Bett Rickards) empty desk in Queen Consolidated’s IT department. Schwartz, who found it weird to write Arrow without Felicity, said it was important to find a way of “keeping her still there without seeing her.” This time, it was admitting her absence — and revealing her Earth-2 counterpart as a successful business owner — but subsequent references to the character will arise from other “creative” means.

Schwartz also the door is open for Rickards to return for the series finale.

“We welcome her back and we’ll see what happens,” she said. 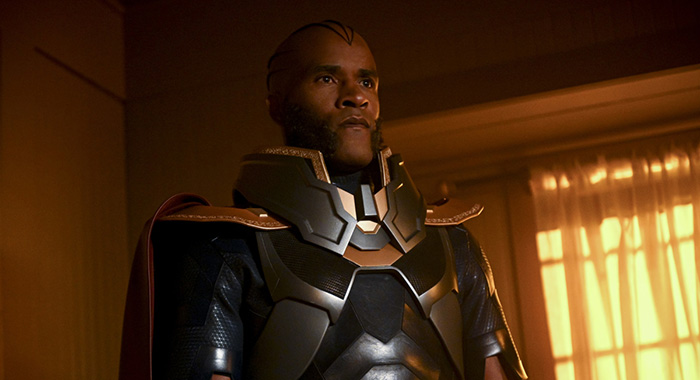 As revealed in the season opener, Oliver is tasked with obtaining various objects for The Monitor (LaMonica Garrett), but as is the interdimensional being’s way, he refuses to explain what the objects are for. Schwartz said Oliver is unhappy about the arrangement and “confronts him soon” about the issue. But that confrontation will no doubt see The Monitor questioning Diggle (John Ramsey) tagging along for the quest.

“He does not like what has happened in this episode,” Schwartz teased. “But Diggle was always there for Oliver and his family. Specifically, Lyla has understood that throughout the seasons that you can’t separate those two.”

Of course, it still remains to be seen if Lyla (Audrey Marie Anderson) has been another member of Team Monitor all along. The original comic book version of the character, Harbinger, was introduced as The Monitor’s assistant and as Anderson will appear as Harbinger in “Crisis,” Lyla’s connection to the Arrowverse’s interdimensional upheaval is very much a mystery. Schwartz said an answer to the Harbinger question will present itself in the third episode of the season.

But the ersatz Team Monitor also presents an interesting cross-show wrinkle: over on The Flash, Barry is unaware of Oliver’s activities or that they apparently share the same fate. When we spoke with The Flash showrunner Eric Wallace, he mentioned there is a scene in which Barry and Oliver discover their roles in The Monitor’s plan and “let’s just say people might get pissed off a little.” 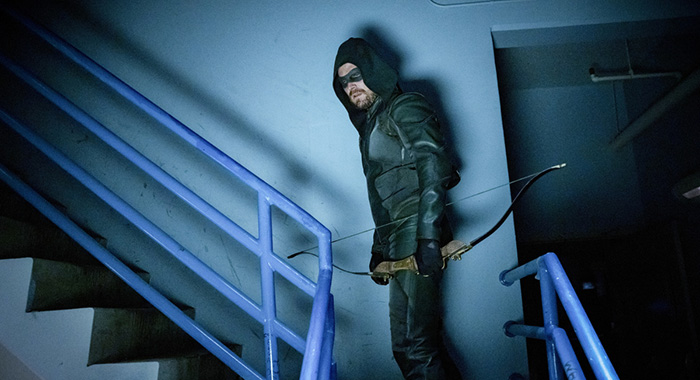 While Team Arrow 2.0 is still going through a number of growing pains, Schwartz said Mia’s (Katherine McNamara) decision to lead at the end of the episode will be the new status quo. This would irk Connor (Joseph David Jones) if not for the fact he has to deal with his adoptive brother J.J. (Charlie Barnett) – the new Deathstroke.

“The brothers have this really fraught childhood that we’ll explain more in the upcoming episodes,” she teased. “Of kind of how they got to this place where J.J. is willing to kill his own brother. And how he went down this path when he’s Diggle and Lyla’s son.”

While the premiere will be the only time Oliver visits another Earth – at least until “Crisis” – the rest of the season will see him running to locations outside Star City.

“[In] upcoming episodes, we visit places that we’ve gone to in our previous seasons,” Schwartz teased, adding only two or three episodes take place in the city Oliver risked so much to save. And though she declined to say what these locations might be, we’re willing to guess return trips to Lian Yu, Nanda Parbat, Central City, Russia, and Hong Kong are on the itinerary. Episode 2 of the season is called “Welcome to Hong Kong,” in fact.

The show is known for staying put in Star City, but Schwartz appreciated the production challenge of mounting new locations each week.

“Legends [of Tomorrow] does it every week so we can too,” she quipped. 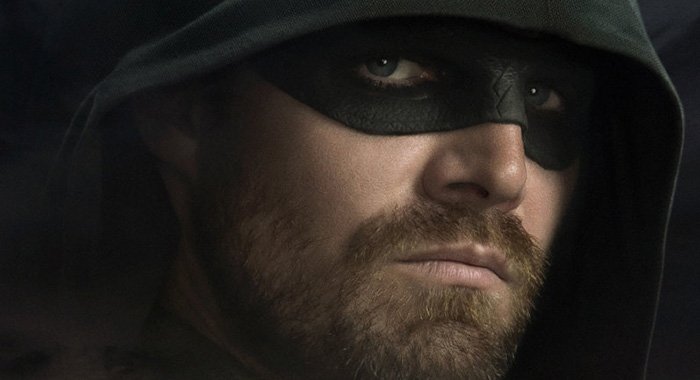 In what has to be one of the biggest cosmic event on any of the Arrowverse shows thus far, the season premiere saw Oliver, Diggle, and Black Siren (Katie Cassidy Rodgers) witnessing the destruction of Earth-2. And though the designation was never used in the episode, Schwartz confirmed that world was the first to be lost in the Crisis, adding, “It does indicate that ‘Crisis’ is starting earlier than we thought.”

“We wanted to start big and we wanted to introduce the upcoming Crisis immediately. Because that is what this season is about and what Oliver is struggling with the entire time,” Schwartz explained.

But as Earth-2 is shared concept across at least two shows, The Flash production team had to sign off on the explosive conclusion.

“We were like, ‘Is this OK? Does this ruin things?’ They were very gracious,” she said.

Clearly, the destruction of Earth-2 offered no immediate problems for The Flash, but with characters like Harry Wells (Tom Cavanagh) and Jessie Quick (Violett Beane) now dead, we imagine that world’s end will be marked in some way later down the line.

The actual visual representation of a universe dying – from the red skies to the way Tommy and Moira disintegrated in front of Oliver’s eyes – recalled the destruction artist George Perez outlined in the first issue of the Crisis on Infinite Earth’s comic book. Schwartz said getting it right in live action was the last thing the production locked down.

“It’s such an important moment, it sets up the crossover, it sets up ‘Crisis,’ and we just wanted to make sure we got it right. So it was a lot of meetings, a lot of conversations,” she explained.

She also admitted there were discussions about saving both Tommy and Moira – whose Earth-1 counterparts are both dead – but those talks concluded with the decision to sacrifice the characters to the antimatter wave. Asked if this was the last time Oliver had to watch them die, Schwartz said, “We are cruel, aren’t we?” before suggesting other versions of Earth-2 characters seen in the premiere may pop up in the remaining episodes or “Crisis” itself.

“Some of them will return, yeah,” she said, but declined to elaborate.

In the meantime, Oliver has plenty of his Earth-1 issues to deal with as Arrow‘s final season continues toward its conclusion.

Arrow airs Tuesdays at 9/8C on The CW.