Aquaman First Reviews: The DCEU Gets Its Second Fresh Film... At Least For Now

DC movies continue to turn the tide with the release of Aquaman, the first solo feature for the maritime member of the Justice League. While it won’t be brandishing as high a Tomatometer score as Wonder Woman, reviews for the James Wan-helmed superhero adventure are mostly positive out of the gate. Aquaman certainly sounds ridiculous, even from the raves, as this is a whole lot of movie (and maybe more). If you just take in the ambitious spectacle and enjoy Jason Momoa’s swagger, you’re in for a wild treat, my man.

Here’s what the critics are saying about Aquaman:

Is it actually any good?

If you’ve ever wondered what pure joy looks like on screen, look no further than the latest film in the DC Universe.
– Germain Lussier, io9

It’s a film for everyone.
– Catalina Combs, Black Girl Nerds

It’s kind of a shock that it doesn’t suck.
– Peter Debruge, Variety

Were it not for Black Panther and Into the Spider-Verse, Aquaman would easily clinch the title for best superhero movie of the year.
– Karen Han, Polygon

It’s a weird and wonderful superhero adventure that strives — and almost succeeds — to be the most epic superhero movie ever made.
– William Bibbiani, The Wrap

What about its place in the DC Universe?

This is the movie Green Lantern was too reluctant to be. It’s the most unabashedly DC Comics-embracing movie in the current shared universe.
– Jim Vejvoda, IGN

Aquaman seems too afraid of falling into the much derided gravity of Snyder’s [DC movies], and does not have the courage to take any of its stakes seriously.
– Elena Lazic, Little White Lies

As with much about the DC universe, the whole thing is hobbled by carelessness.
– Eric Kohn, IndieWire

And when compared to Marvel?

Comes closest to nailing that particular brand of self-aware humor and save-the-world earnestness that has been working so well over at Marvel.
– Anne Cohen, Refinery29

When it gets trippy, it floats within hailing distance of Doctor Strange.
– Joshua Rothkopf, Time Out

Change a few names and locations in the plot synopsis, and Aquaman could have been a Thor reboot.
– Eric Kohn, IndieWire

How crazy is it?

Wan’s Aquaman is pulp, through and through, and it’s as broad and outlandish as you could possibly hope for.
– William Bibbiani, The Wrap

It’s bonkers. It’s bananas. It doesn’t always work but when it does, oh wow is it fun.
– Germain Lussier, io9

Its unapologetic ridiculousness is exactly why it’s so delightful, bucking so many of the rules set for the genre in the last decade.
– Karen Han, Polygon

There’s always some form of insane nonsense on the screen to keep you bewildered and entertained so you don’t really have the time or energy to focus on its more underwhelming aspects.
– Sean Mulvihill, FanboyNation.com

Does it go overboard?

Wan’s film pushes too far sometimes, but that’s because it’s pushing as hard as it can.
– William Bibbiani, The Wrap

What seems like fifteen different subgenres are crammed into a submarine ready to burst…no scene ever contemplates the phrase ‘too much.’
– Matt Donato, We Got This Covered

Instead of making one Aquaman movie, Wan has made three or four, spinning the wheel and changing modes whenever one idea dries up.
– Eric Kohn, IndieWire

It’s as if someone told Wan and team that Aquaman would be the title character’s one and only shot at a solo movie, and they made sure to go for broke.
– Alex Abad-Santos, Vox

This is a movie that wants to kill you with sensory overload. (It may have even succeeded. I’m fairly sure I am writing this as a ghost. Boo.)
– Mike Ryan, Uproxx

How does Aquaman look?

The production designers have outdone themselves here imagining an elaborate other world beneath the ocean’s surface.
– Peter Debruge, Variety

Dubbing Aquaman one of the year’s most accomplished visual achievements is no hyperbole… Atlantis’ sunken megacity stuns on par with Black Panther‘s unveiling of Wakanda.
– Matt Donato, We Got This Covered

Aquaman’s greatest strength is its visual style. Even when it borders on bioluminescent whimsy, it’s so distinctly and ceaselessly its own.
– Alex Abad-Santos, Vox

Does it deliver on the action?

Imagine if someone cut together all the biggest action sequences from the last few decades of Hollywood.
– Helen O’Hara, Empire Magazine

There are moments when the action is just so wildly absurd that you can’t help but just stare at the screen in awe of Wan’s audacity.
– Sean Mulvihill, FanboyNation.com

The majority of the time the action set pieces seem quite arbitrary… this saddles the overlong film with a ponderous, grinding feel.
– Todd McCarthy, Hollywood Reporter

It’s confusing but not quite incoherent.
– Peter Debruge, Variety

How is Jason Momoa?

What a perfectly cast superhero…take away Momoa’s steady presence, and you’re looking at an overstuffed mess.
– Mara Reinstein, US Weekly

He leans into the absurdity of his appearance. He knows he’s ripped and superhuman, so why pretend otherwise? But none of that really qualifies as acting.
– Anne Cohen, Refinery29

Do the other characters shine?

Heard sleepwalks through her part and has zero chemistry with Momoa.
– Mara Reinstein, US Weekly

[Heard] fails to really connect, and big part of that is just how indifferent the script for Aquaman is towards its women characters – of which there are only two.
– Sean Mulvihill, FanboyNation.com

If there’s one thing to like about Aquaman, it’s that the film allows women such as Mera and Atlanna to kick some ass.
– Danielle Solzman, Solzy at the Movies

Dolph Lundgren brings a gruff gravitas to his supporting role…Between this and Creed II, we are in the midst of a Lundgrenaissance – and I’m totally fine with that.
– Jim Vejvoda, IGN

Abdul-Mateen II brings a ferociousness and intensity that works for that character’s specific arc, but feels out of place as it only matches some of the tones that Aquaman is juggling.
– Spencer Perry, ComingSoon.net

Black Manta could have been saved for the sequel and this movie wouldn’t have suffered for it.
– Jim Vejvoda, IGN

So we should look forward to more Aquaman?

If it stays in the water a bit too long — well, I’d still come back for a sequel.
– Angie Han, Mashable

An Aquaman sequel is reportedly in the works.The filmmakers just need to find the heart of their ocean.
– Johnny Oleksinski, New York Post 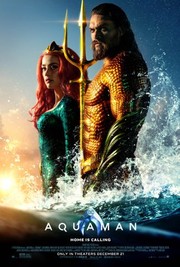 Binge Guide: 5 Titles to Watch If You Love Killing Eve