The musician known as St. Vincent went down the “narcissism rabbit hole” for The Nowhere Inn, the absurdist meta-comedy that holds a funhouse mirror up to the meticulously artificial genre of the music documentary. 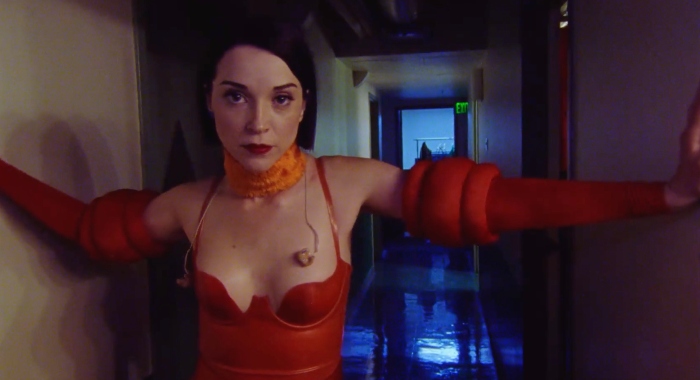 As a genre, the music documentary is premised on the promise of access. A concert doc hopes to bring audiences the immediacy of a live performance they may have missed (or wish to relive). A biographical doc, meanwhile, aims to take us past public personas and appearances and into the private world of a music act. Except, as Annie Clark – better known as the ever-alluring St. Vincent – found out when watching a whole slew of them, these promises are only ever illusory. There may be a semblance of access, but everything offered has been highly curated; any hint of authenticity is neutered by the very confines of the genre.

The Nowhere Inn, a new film that finds Clark playing a heightened version of herself as she sets out to film a concert documentary, was first conceived as a concert doc meant to document St. Vincent’s Masseduction tour. But, as the meta-approach of this bare-bones synopsis suggests, such a straightforward tact was never going to work. Or rather, it wouldn’t have been as much fun as an all-out deconstruction of the genre and the very pop/rock stars it so often exalts.

“Well, I didn’t really want it to be just a straight concert,” she told Rotten Tomatoes recently, recalling the origins for this scripted project. “So I asked Carrie Brownstein if she would help me make some interstitials to go in between songs; have some cute way of framing it, I guess. And then that kind of dovetailed into conversations that Carrie and I have been having for years about authenticity and performance.”

It was during those early talks about music docs that the two friends realized the genre at large (exceptions notwithstanding) was stuck in a rather rigid schema. You’d hear about humble beginnings and tragedies that marked an artist’s early life. You’d get a requisite going-home sequence and the attendant “I’m just a regular person, but I also happen to be massively famous” sensibility that couldn’t help but ring hollow.

“Well, why don’t we just make a crazy, meta-scripted, psychological absurd horror that deals with all of it?” Clark recalls asking herself. “And in a way that, oddly enough by scripting it, would make it more authentic than if I had tried and failed to perform authenticity?”

The film begins like a straightforward mockumentary wherein Carrie tries to get Annie to make her backstage life less boring (less video games and more… anything else, really). But soon, as Annie begins to take her St. Vincent persona off of the stage and into her real life, hoping to create more exciting footage, The Nowhere Inn takes a turn for the absurd. That Clark describes that turn – which finds Annie hiring a fake family out in the country to visit and later making Carrie and Annie twinned images of each other – by invoking the likes of Bertolt Brecht, David Lynch, and Peter Greenaway hints at the twisted, near-nightmarish logic that eventually overtakes The Nowhere Inn. 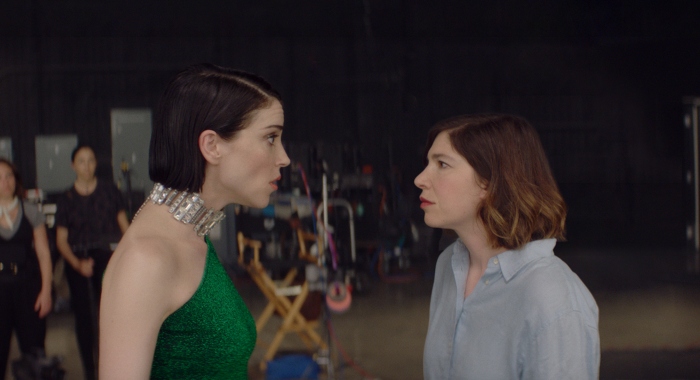 But even before the Bill Benz-directed film all but splinters out into its Rubik’s cube of an ending, it cements itself as a probing satire that artfully skewers the performance of authenticity that so constitutes contemporary celebrity culture. Even the moments that supposedly humanize artists in music docs, to Clark, feel not just alien but outright disturbing. “I get confused because I see things celebrated that seem to me like just really terrible behavior – like inhuman-like narcissism to the next level,” she says. “But it’s sort of lauded. And I wanted to do that in this movie and play with it.”

Clark points to what is, in her mind, the funniest scene in the film. It’s a moment where a fan, having been brought backstage to meet with Annie, pours her heart out and tells the artist how her music helped her cope with a personal tragedy. There’s such a naked vulnerability on display that the sudden tears that overtake Annie at first feel not just earned but necessary. But there’s no empathy at work here. Just another instance of an artist unwilling (or unable) to let other people center themselves when she’s around. “I have to hijack it and make it about myself,” she explains. “Because I’m so narcissistic that I can’t even allow her the space to tell this heartbreaking story. And then she ends up consoling me, and it’s just like – what a monster!”

As Clark found out firsthand when attending a Sundance screening of the film back in 2020 (no one had the foresight to tell her or Brownstein that talent rarely sit in on these premiere screenings), the scene didn’t quite land with the raucous laughter she expected. That was an early sign that The Nowhere Inn may be more unintentionally baffling than she’d first anticipated. Or that the humor she finds in this narcissistic monster she created out of the on-screen Annie she plays may rightfully keep audiences in a sense of unease. 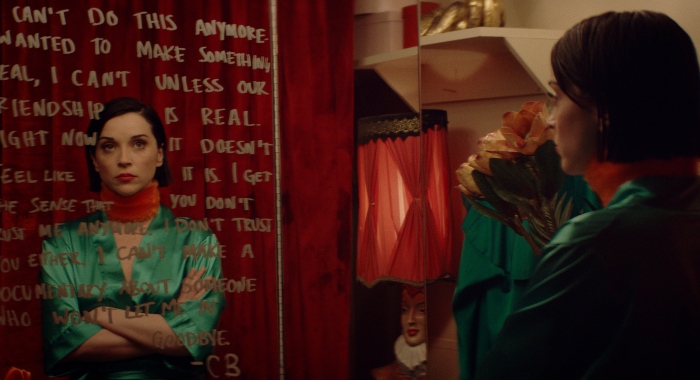 As Annie puts it late in the film when she’s become a laughably terrifying prima donna: “Ok. Let’s only document the things I can control.” It’s a line that epitomizes the fine line The Nowhere Inn walks, existing at the intersection of a comical threat and an existential joke.

“It’s a funny one because I think music is so intimate. And I’ve talked about my whole life, all my fears and loves and concerns and tragedies through music. And so that is really deep. I just think that’s a really deep connection that, even if you don’t know what I ate for breakfast, it’s a kind of a deeper part of me. I really believe in that.”

If The Nowhere Inn revels in poking fun at the very possibility of music documentaries offering any kind of authentic appreciation of the artists they profile, Clark doesn’t discount the way in which its outré tone may in fact give her fans newer insights into her own person – and persona.

“I think they might get a better sense of my appreciation of absurdity – like that I don’t take myself very seriously. And that identities are very malleable and we’re just all playing with it all the time. That reality feels increasingly illusory.”

The Nowhere Inn is in theaters and available on-demand from Friday September 17, 2021.