This week’s Ketchup brings you more headlines from the world of film development news, covering such titles as Cloverfield 4, Fantastic Four, and The Karate Kid.

A MYSTERIOUS FOURTH CLOVERVIELD MOVIE IS IN THE WORKS 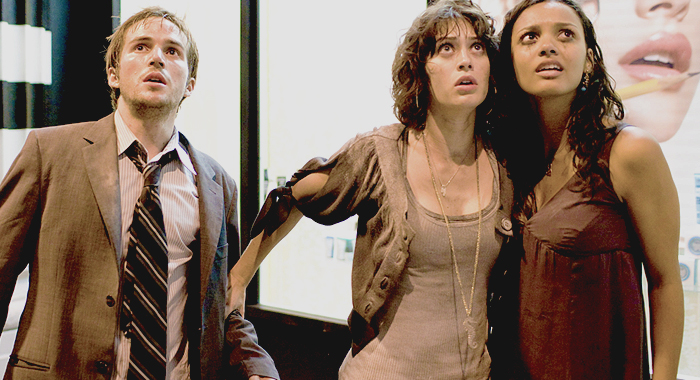 There is arguably no modern film franchise quite like Paramount and producer J.J. Abrams’ Cloverfield. Named obliquely for the Santa Monica street that leads to J.J. Abrams’ Bad Robot production company offices (rather than, say, something specific about any of the films), the 2008 monster movie Cloverfield (Certified Fresh at 78%) has only the thinnest connections to the other films, the paranoid thriller 10 Cloverfield Lane (Certified Fresh at 90%) and the astronaut body horror of The Cloverfield Paradox (Rotten 22%). Instead, the Cloverfield franchise is more of a loose anthology-style tag given to seemingly barely related sci-fi thrillers. That disconnection was even more pronounced by how both 10 Cloverfield Lane and The Cloverfield Paradox were produced, which was under different titles (The Cellar and God Particle) before the eventual trailers revealed they were actually Cloverfield movies. That makes this week’s news that Paramount is now developing a fourth Cloverfield movie stand out, as it is designated specifically as a Cloverfield movie right from the start. The fourth Cloverfield will be directed by Babak Anvari (Under the Shadow) for producer J.J. Abrams and production company Bad Robot.

1. MYSTERIOUS THE KARATE KID MOVIE ANNOUNCED FOR SUMMER OF 2024

Of the top 9 box office hits of 1984, the only films not to receive either sequels or remakes were themselves already sequels. That includes the year’s No. 5 hit, The Karate Kid (Certified Fresh at 89%), which received three direct sequels, a kung fu reboot in 2010 (Fresh at 66%), and the ongoing streaming sequel series Cobra Kai (Fresh at 95%). Given that Cobra Kai is a decades-later continuation of the story and characters from the first Karate Kid, it was especially surprising when Sony stealth-announced late last Friday afternoon that a new The Karate Kid is now scheduled for release on June 7, 2024. One of the reasons a release date for a new The Karate Kid was so surprising is that there had been no indication that Sony was developing a new film at all, and pretty much everything about it remains a mystery, including whether it’s a sequel, a “threeboot,” or something else. The only hint was that the 2024 movie will be “the return to the original Karate Kid franchise.” That wording might suggest the new film could be a continuation of Cobra Kai, but series creator Jon Hurwitz has already clarified that the 2024 film “isn’t from us or focused on the Cobra Kai cast. Don’t know much about it, but wish it well.” Considering that the Cobra Kai cast includes original Karate Kid stars Ralph Macchio and William Zabka, this doesn’t explain the project much better, as it’s apparently a “return to the original Karate Kid“… presumably without the original Karate Kid? Whatever Sony Pictures has planned, we will find out within the next two years if they stick to their plans for a June 7, 2024 release date.

Marvel Studios still has not given fans any indication of what the premise of their revival of Fantastic Four (11/8/2024) might be, or which villains might be featured. The news this week, however, that Marvel has hired two screenwriters to work on the film might, however, give us an idea of the tone, if not the content. It was just a few weeks ago that director Matt Shakman (WandaVision) landed the Fantastic Four job. Now, the screenwriting job has gone to the relatively new team of Jeff Kaplan and Ian Springer. Kaplan and Springer’s only produced feature films were the 2012 indie film Bert and Arnie’s Guide to Friendship (Rotten at 33%) and 2014’s The Last of the Great Romantics, but their upcoming projects include K-Pop: Lost in America for Rebel Wilson and Disaster Wedding for the team behind Andy Samberg’s Palm Springs (Certified Fresh at 94%). Like many writers and directors Marvel has recruited, Kaplan and Springer appear to have roots in both indie filmmaking and comedies rather than superhero fare.

In June, Apple Original Films landed the rights to the next project from director Steve McQueen (12 Years a Slave, Widows). Like 12 Years a Slave, the film Blitz will be a historical drama, this time set during the World War II bombing raids by Nazi forces on the city of London as part of the Battle of Britain, also known as “The Blitz.” Blitz is expected to have an ensemble cast, and the first star to be announced is four-time Academy Award nominee Saoirse Ronan (Lady Bird, Brooklyn), news of which came days after the release of her latest film, See How They Run (Fresh at 71%). Steve McQueen wrote and will both direct and produce Blitz for Apple Original Films, with filming expected to start in late 2022.

At their D23 event earlier this month, Disney announced that Mufasa: The Lion King, the CGI prequel to Disney’s $1.65 billion box office hit The Lion King (Rotten at 52%) will be released in theaters in the summer of 2024 (which was soon narrowed down to the 4th of July weekend on July 5, 2024). We’ve known for a while that the prequel would focus on Simba’s father Mufasa (voiced by Aaron Pierre and James Earl Jones as the older version), but director Barry Jenkins (Moonlight, If Beale Street Could Talk) revealed this week some of the other returning characters. Calling them “familiar faces,” Mufasa: The Lion King will feature the return of the mandrill Rafiki (John Kani), the evil brother Taka aka Scar (Kelvin Harrison Jr), and the comedy relief pair Timon (Billy Eichner) and Pumbaa (Seth Rogen). (One character noticeably absent from that list was Zazu the hornbill, whose 2019 voice actor John Oliver has been regularly making Zazu jokes on his show Last Week Tonight pretty much ever since.)

The $1.46 billion box office success of Top Gun: Maverick (Certified Fresh at 96%) has pretty much assured that we will now get a wave of “legacy sequels” for beloved 1980s movies (including, arguably, that new Karate Kid – see above). This revived rush to relive the 1980s (like that trend ever really went anywhere) is also helping long-struggling movies like Beverly Hills Cop 4 (which has been in development since the 1990s), now under the new title Beverly Hills Cop: Axel Foley. Eddie Murphy, who starred in the original Beverly Hills Cop (Certified Fresh at 83%), the No. 1 box office hit of 1984, is obviously returning as the title character (twice over now). We learned this week, however, that Netflix is really stacking the nostalgia deck by also casting four of Murphy’s original Beverly Hills Cop co-stars, namely the L.A.P.D. detectives played by Judge Reinhold and John Ashton, Paul Reiser’s detective character, and Bronson Pinchot’s wacky Serge character. Netflix has not yet announced their release strategy (strictly streaming or otherwise) for Beverly Hills Cop: Axel Foley.

One of the surprise streaming hits of the summer of 2022 was the Hulu drama The Bear (Fresh at 100%), the breakout star of which was a young actor named Jeremy Allen White. The first movie project to cast White following the success of The Bear is a sci-fi romance called Fingernails. White’s co-stars in Fingernails will include Jessie Buckley (I’m Thinking of Ending Things, Men) and Riz Ahmed (Sound of Metal, Rogue One: A Star Wars Story). Fingernails will be set in a future “where scientists have discovered a way to measure love, with institutions providing couples with a test to see if they really are in love with each other in order to help them succeed.” Buckley and White will play a couple with a “certified love relationship,” and Riz Ahmed will play a “mysterious and dedicated instructor” at an institute that provides these “love tests.”

7. POST-OSCARS SLAP, WILL SMITH MAY REBOUND WITH BRILLIANCE AND EMANCIPATION

In Hollywood’s 100+ year history, nothing quite like Will Smith’s Academy Awards night slap has ever happened, especially in regards to how it immediately seemed to slow down the trajectory of one of Hollywood’s biggest stars. Although some projects may have just slowed down a bit, the controversy also impacted the slavery thriller Emancipation, which Smith had already filmed in 2021, and which had been seen by Apple as a likely late-2022 “awards season” release. As a producer and potential star, Smith is continuing to line up new projects, including an adaptation of the sci-fi novel Brilliance by Marcus Sakey about a world in which 1% of the world’s children are born with amazing superpowers. Smith is producing (and may star in) Brilliance, which is now being developed for director Sharmeen Obaid-Chinoy, who has won two Academy Awards in the documentary short category (for Saving Face and A Girl in the River: The Price of Forgiveness). The Brilliance screenplay was adapted by Akiva Goldsman, who previously worked with Will Smith on I, Robot (Rotten at 56%), I Am Legend (Fresh at 68%), and Hancock (Rotten at 41%).

Perhaps as a sign of how the film industry is changing, the last few weeks and months have included an unusual number of cancelled projects, like Batgirl and Matthew McConaughey’s Dallas Sting. In the same vein, Brad Pitt revealed this week that, in addition to this year’s The Lost City (Certified Fresh at 79%) and Bullet Train (Rotten at 54%), there was actually a third movie that he almost starred in with Sandra Bullock. According to Pitt, the now-cancelled (before it ever really got started) project would have featured him and Bullock as a pair of divorced QVC hosts, but “we hate each other, and we’re taking out on air as we sell things… that’s as far as we got.”

The 2019 adaptation of Stephen King’s Doctor Sleep (Certified Fresh at 78%) was always going to be a difficult film to adapt and to market to audiences. A key problem was that King wrote Doctor Sleep as a sequel to his novel The Shining, except that the Stanley Kubrick movie adored by fans was not a direct adaptation of King’s novel. So, director Mike Flanagan had to somehow adapt King’s book while also transforming it into a sequel to a movie that King himself famously hated. Doctor Sleep was not a box office success, opening at No. 2 behind Midway and earning just $31 million domestically. As convoluted as the novel-to-film-to-novel adaptations had already been, that low number also led to the demise of another film project, which would have been a sequel to The Shining (King’s or Kubrick’s, we may never know), which would have focused on the young Dick Hallorann, played in Kubrick’s film by Scatman Crothers and in Doctor Sleep by Carl Lumbly.