Look Out for a Shining Reference In Episode One 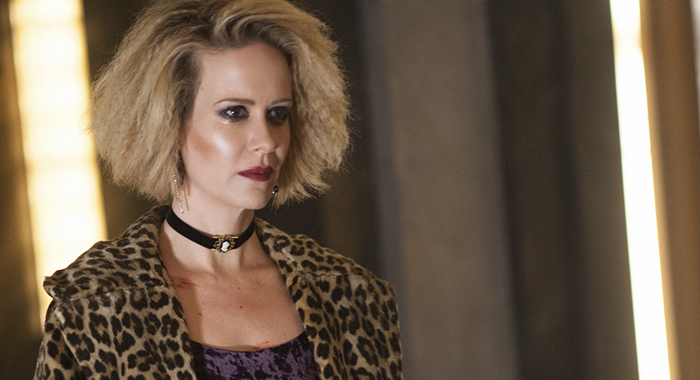 Between the sinister child spirits, the blood-stained sheets and drug-addled residents with names like Hypodermic Sally, a stay at American Horror Story’s  Hotel Cortez would probably earn the worst Trip Advisor rating of all time. But for these same reasons and many more, viewers can’t wait to check in.

Can you blame them? Look at this cast list: Finn Wittrock, Evan Peters, Cheyenne Jackson, Denis O’Hare, Chloe Sevigny, Matt Bomer, Wes Bentley, Angela Bassett, Kathy Bates, and Sarah Paulson have all returned for the fifth season of FX’s horror anthology franchise, joining Lady Gaga in an establishment that Bates’s hotel manager Iris describes as a building with “a heart as black as the ace of spades.”

At some point, guest stars such as Naomi Campbell, Lily Rabe, Darren Criss and Max Greenfield also will drop by the Cortez. What’s unclear is whether they’ll leave the place alive.  American Horror Story: Hotel creators and executive producers Ryan Murphy and Brad Falchuk didn’t reveal much to reporters at a recent press conference, but here are  seven details that may stoke your excitement for the upcoming season – which could be the bloodiest yet. 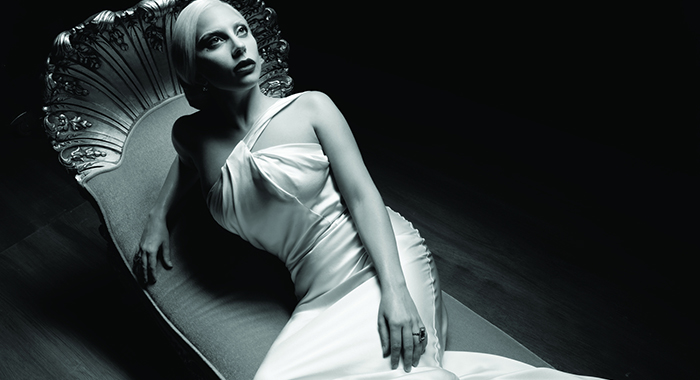 American Horror Story: Hotel’s Cortez is owned by Gaga’s mysterious Countess, a gorgeous socialite who maintains her good looks with a steady diet of blood and sex. For the latter, she draws upon multiple sources, including her long-term lover Donovan (Bomer); a male model named Tristan (Wittrock); a film star named Ramona Royale (Bassett); and, Murphy told a group of reporters, a fashion designer named Will Drake (Jackson). Bates’s Iris is Donovan’s overbearing mother, and O’Hare plays the gender-bending Liz Taylor, who works in the Cortez’s Blue Parrot Lounge.

In keeping with one of the season’s main themes, addiction, Paulson portrays a living ragdoll of a woman known as Hypodermic Sally. Wes Bentley’s character, John Lowe, is a detective who visits the hotel as part of an investigation into a series of grisly murders perpetuated by the Ten Commandments Killer. In a move that would only make sense in a horror movie, John brings along his wife Alex (Sevigny) for the fun. 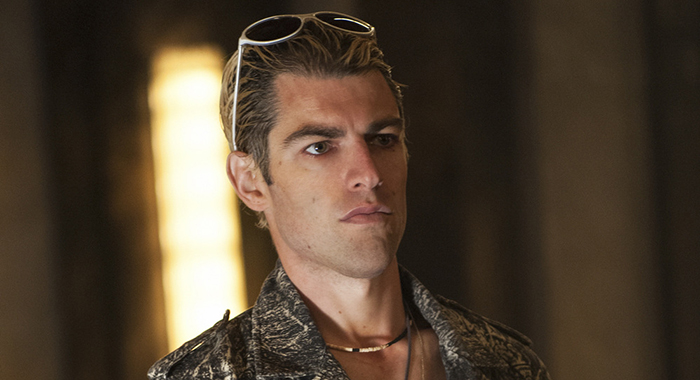 The most surprising vision may come with Greenfield’s guest appearance. Murphy said the New Girl actor lost 30 pounds for the role and got his waist size down to a 27 by living on celery water. “He’s really committed to it,” Murphy said, adding, “Probably the most disturbing scene we’ve ever done, he is at the center of [it].” 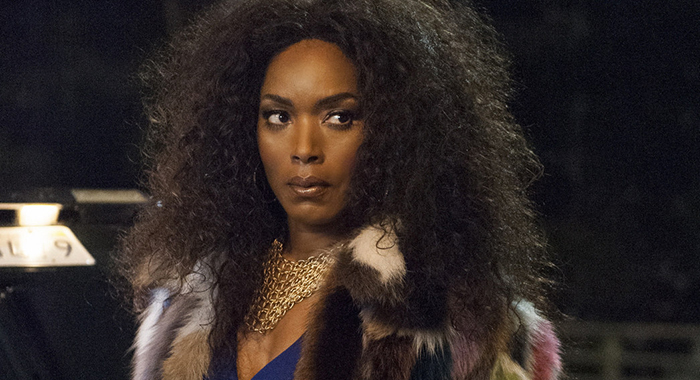 Another theme that Falchuk mentioned is that of insecurity, one of several commonalities Hotel shares with American Horror Story’s Murder House season.

“There is that feeling of, like, when you go home, wherever your bed is, wherever your safe space is, it’s the least safe place you can be in the entire world,” Falchuk recently told critics.

Haunted by the Past 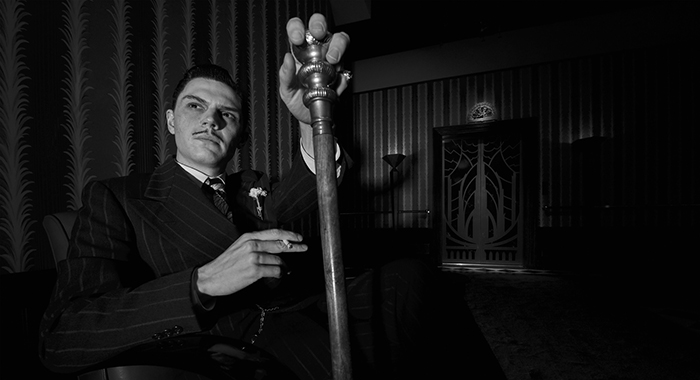 As in previous seasons, Hotel presents part of its story in flashback, revealing Cortez’s history through the tale of its devious builder James March (Peters).  Murphy wanted to establish the hotel as a reflection of present day Los Angeles.

“Our hotel was built in 1930, and is sort of an art deco masterpiece that has fallen into ruin that once was where everybody in town went,” Murphy explained. “Then it felt out of favor… and now it’s sort of like a skid row, derelict sort of palace. It’s really also a rumination on, I feel, sort of the loss of culture in Los Angeles, but also about how Los Angeles is coming back.”

Murphy also based his fictional construct on familiar places. “I was always very obsessed with the Hotel Cecil that is right downtown [in Los Angeles], which is where the Night Stalker was rumored to have stayed, and where they had the video of the girl getting in the elevator” only to never be seen again, he said.

The executive producer added, “We do a very loving nod to the film The Shining in the first episode, that’s sort of a wink and a nod.” 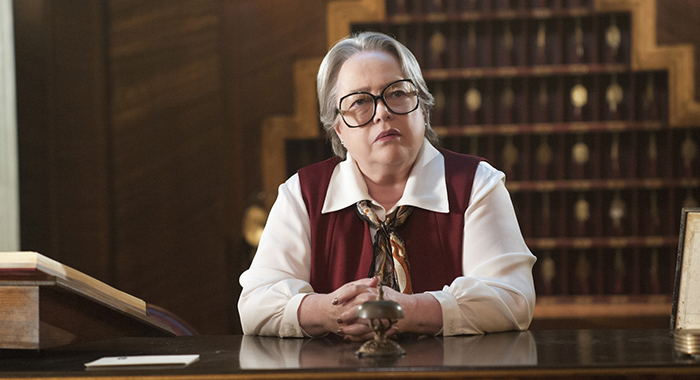 American Horror Story’s fifth season is the first that follows the revelation that all of the seasons are connected. It also represents the first time that the series has returned to a city to tell a new tale. “So of course some characters who were in Murder House, it only makes sense that some of them would probably have had some relationship to this hotel,” Murphy teased. 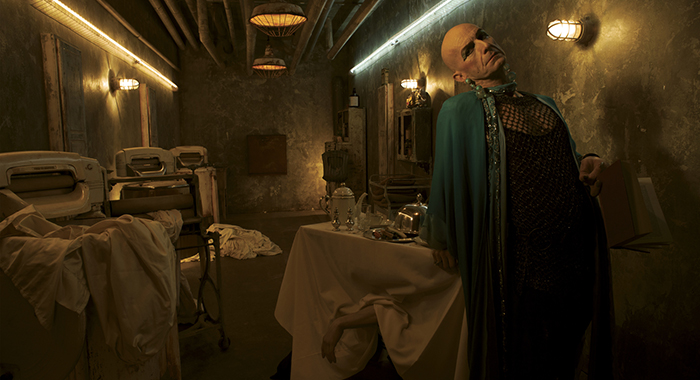 In addition to announcing Rabe’s return as Aileen Wuornos in the two-part Halloween episode titled “Devil’s Night,” Murphy hinted that many more send-ups of real-life figures will pass through the Cortez this season. “The show has always played with that. I think it’s really fun,” he said. “The hotel is set in L.A., so we’re playing with a lot of historical L.A. figures, or people who have had some connection to L.A. come through. But I always love taking a real person a putting a spin on it, which is sort of what we’re doing with the Lily/Aileen thing.” 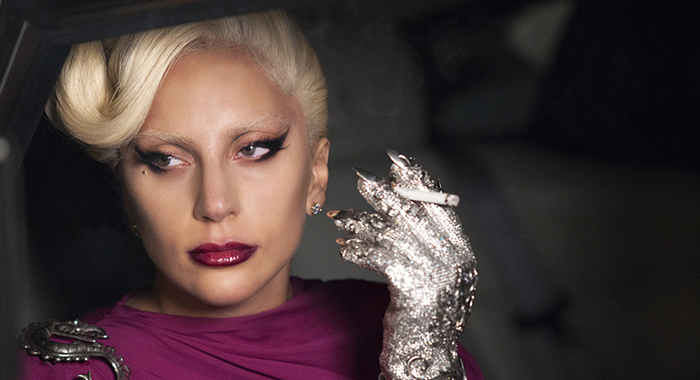 Oddly, though Hotel stars one of pop’s most celebrated divas, Murphy said there would not be any musical episodes or interludes along the lines of Stevie Nicks’s Coven cameo or Jessica Lange’s colorful numbers during season four. “Jessica loved [singing] so much that every season, she said, ‘I want to sing again, I want to sing again!’” Murphy explained. “I thought for the Freak Show season it made sense, and I wanted to do sort of a Baz Luhrmann thing with it. But I think we’ve done that, and we’re not going to do it again.”

Instead, Murphy plans to use Gaga’s monstrous appeal to delight and horrify – and we won’t have to wait long to witness just how ruthless the Countess can be. “Everybody who does the show has to start with something disturbing and awful right away.”