30 Years Later, Tremors Is Still A Perfect Monster Movie, and It Keeps Getting Better

To celebrate its release in 1990, we look back at the cult classic that combined 1950s monster flicks, frontier westerns, and a timeless version of America that both never and always existed.

Perfection – it’s not just a fictional town in Nevada. It’s also a film called Tremors, which is set in that fictional Nevada town (pop. 14, fluctuating) and was released 30 years ago this weekend. “Hang on, Val, let’s not go off half-cocked,” you cry (because in this scenario, you are dumb, skeptical Nestor, doomed to be sucked into a burrowing earth-monster’s mouth, while I, of course, am the reluctantly valiant Val). “Are you really saying that this unassuming, low-budget 1990 B-movie-pastiche flop starring an actor so ubiquitous there’s a game about it, the dad from Family Ties, a country singer-turned-actress, the little girl from Jurassic Park, the Asian guy from 3 Ninjas, and Fred Ward, is actually perfect?” Why, yes, I am.

Tremors, starring Kevin Bacon, Michael Gross, Reba McEntire, Ariana Richards, Victor Wong, and Fred Ward, is the feature directorial debut of Ron Underwood, who would go on to hit massively with City Slickers and miss even more massively with The Adventures of Pluto Nash. Tremors is neither of those extremes: a perceived disappointment on release, it turned a $5m profit on an $11m budget but really found its groove on home video formats and TV syndication. So, like many others, my own lifelong love affair with this modest masterpiece did not begin with a trip to the theater. To this day, not one of my 60-odd viewings of this ridiculously rewatchable horror-comedy has ever been on the big screen.

No, I first saw Tremors as God intended: on a dodgy VHS recorded off the TV and missing the first 40 seconds. We only upgraded to a store-bought video – and discovered that gorgeous, foreshadowing opening wide shot of Kevin Bacon’s Val peeing off the very cliff where the film will end, doubtless an homage to John Ford’s The Searchers – when that homemade copy grew snowy with overuse and threatened to gum up the VCR. My point here is that you can look back on the film’s lackluster 1990 reception and speculate that it somehow wasn’t made for instant-gratification contemporary mass consumption. Instead, destined to become more beloved by the chosen few who privately discovered it, Tremors was, despite its tone of breezy disposability, built to last. 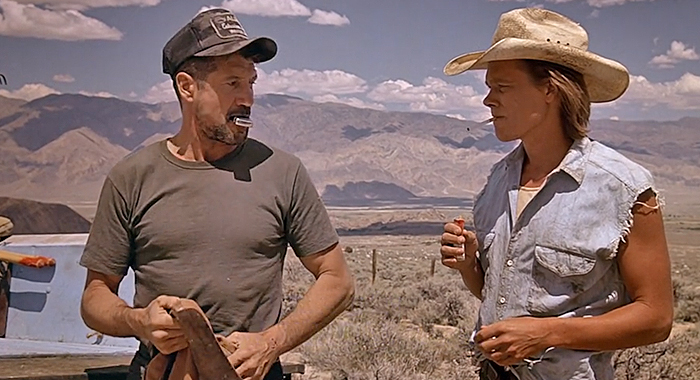 The sturdiness of its construction begins with the screenplay. Writers Brent Maddock and S.S. Wilson, flirting with fame after the success of Short Circuit, and years before they’d flirt with notoriety by writing Wild Wild West (fun fact: Wild Wild West had a screenplay!) worked and reworked a concept that Wilson had jotted down years before while on a desert hike: “What if there was something under the ground that meant I couldn’t get off this rock?” That slim idea eventually blossomed into an archetypally classic screenplay — seriously, budding screenwriters could save a few hundred bucks by spending the weekend of their Robert McKee seminar just watching this movie repeatedly instead. All the rules are pristinely observed: the gradual escalation of stakes; the way character dictates destiny; and a climax in which the salvation of the community (the remaining townsfolk gathered on that “residual boulder”) and the solution of the hero’s previously established central flaw (Val’s inability to plan ahead) pivot around the same piece of action (the outwitting of Ol’ Stumpy, the final Graboid).

No two of the four monsters are ever killed in the same manner – they are, variously, knocked out, shot to pieces, blown up with bombs, and finally, bested by gravity and their own imperfect evolutionary design (“Can you fly, you sucker?”). Acts of heroism and moments of ingenuity are shared liberally among the whole cast of oddball misfits — Miguel’s idea for the tractor decoy, Rhonda’s pole-vaulting escape plan, Heather’s precision shooting at the tentacle gripping her husband’s leg, Earl’s “going fishing” notion, the sheer overwhelming firepower represented by Burt’s basement (“Broke into the wrong goddamn rec room, didn’t you, you bastard!”). And everything, from Val and Earl’s frequent games of rock-paper-scissors to the constant yin-yang of their cigarette bit (one will have the pack and the other will have the lighter) and Val’s opening jibe about Earl’s “stampede” story, gets picked up on later. This is a film that refers back to itself in an endless enclosed loop, and that’s what I mean when I say perfection: Tremors is a complete system, a complete microcosmic universe, unto itself. 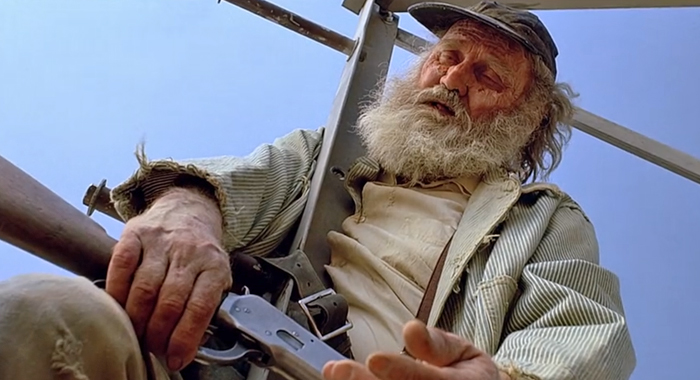 So the plotting, with its steady rhythms of snarky dialogue, spooky phenomena, slimy sight gags, and cheesy jump scares, is almost schematic. But it’s so skillfully fleshed out by an unusually characterful cast that we don’t notice the mechanics at work across its economical 96 minutes. Even minor players – many of them destined for grisly deaths – are unusually dimensional. We only ever see him dead from dehydration, clinging to a telephone pole and clutching his trusty Winchester, but that “damned old boozehound” Edgar Deems (Sunshine Parker) has a whole offscreen history behind his “sorry ass.” Ditto Old Fred (Michael Dan Wagner), the sheepfarmer whose terrified dead face provides the film’s best scare. The doctor (Conrad Bachman) and his wife (Bibi Besch) are given a lovely moment of long-married-couple sparring before being offed in the movie’s most affecting sequence. Even the two doomed construction workers drilling on the road to Bixby get a little moment of bumbling, Abbott-and-Costello action before winding up little more than a splodge of brain matter inside a hard hat.

The town’s residents are better drawn still, up to and including the adorable natural chemistry that exists between Bacon’s Val and Fred Ward’s Earl. Yet they share a curious feature that contributes to the film’s endless rewatchability: they exist sharply in the present moment, but their lives are never actually explained. Really, the whole town of Perfection is inexplicable: where does Melvin (Bobby Jacoby), one of cinema’s greatest annoying-s–thead teenagers, come from? Where are his parents? How does he live? What did Burt do before moving here that gave him the financial wherewithal to build his desert fortress? Where does visiting student Rhonda “pleistocene alluvials” LeBeck (Finn Carter) actually live? How did Walter Chang (Victor Wong) end up owning the town’s sole amenity? (Side note: if you want to read about a storied life, just look into artist and actor Wong’s bio, which includes palling around with Langston Hughes and Lawrence Ferlinghetti and inspiring a character in Jack Kerouac’s Big Sur). 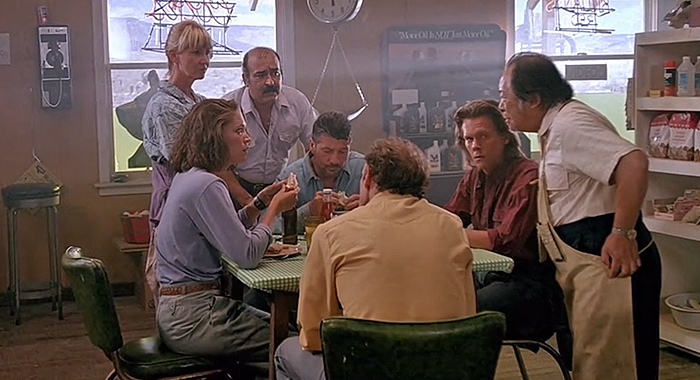 And of course, how did Val and Earl, among the most bromantic buddy pairings the medium has ever conjured up, come to occupy adjacent trailers in a two-horse town that’s little more than a wide spot in the dusty road to Bixby? How did they stumble into their pre-gig-economy jobs as hired hands/handymen? How did they meet and formulate their borderline Beckettian double act (just call them Valdimir and Earlstragon)? As with the Graboids, you can have theories on where everyone comes from, but the hows and whys are just not that important. In fact, it may be crucial to the film’s delicious longevity that those issues remain undefined: while some are addressed in the film’s four DTV sequels, its prequel, and its two TV show incarnations (the latter of which happened as recently as 2018 but never got beyond the pilot), those explanations always spoil the perfectly calibrated balance between goofy, gory, and good-natured that only the original Tremors ever achieved.

Cliffs to the north, mountains to the east and west, and the only road out of town is blocked — Perfection exists in total “geographic isolation.” And Tremors, the movie, exists in a kind of temporal isolation, in which its multiple time frames combine to take it out of time altogether. This is a never-never land comprised of the throwback 1950s monster flicks it so affectionately parodies, the frontier westerns that its spectacular photography evokes (as well as the characterization of Val and Earl as anachronistic cowboys stranded in modern times), and the easing global tensions and general optimism of the glasnost era in which it was made. It’s a perfect bubble of contradictions that exists outside of real-world circumstance, politics, or anything as faddish as “relevance.” And yet that makes Tremors a curiously vital place to visit once in a while, especially in more divisive moments. It’s a cheesy, schlocky, irreverent entertainment that is also a timeless reminder of an America that both never and always existed, in which human qualities of decency, community and ingenuity always outweigh ideological differences, and all that’s really needed to defeat the beasts beneath our feet is gumption, good-heartedness, and​ ​a few household chemicals in the proper proportion. 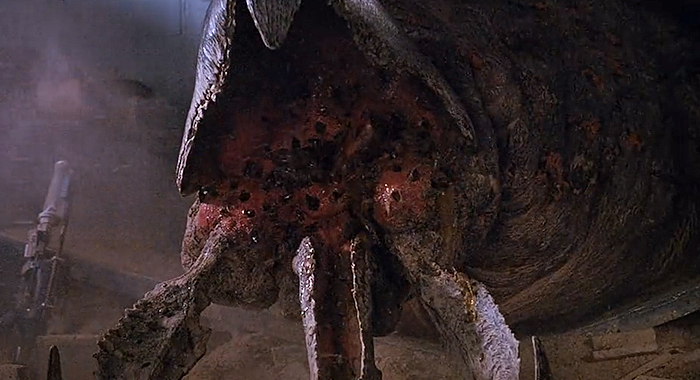 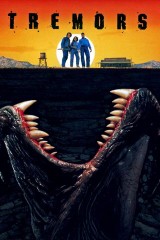 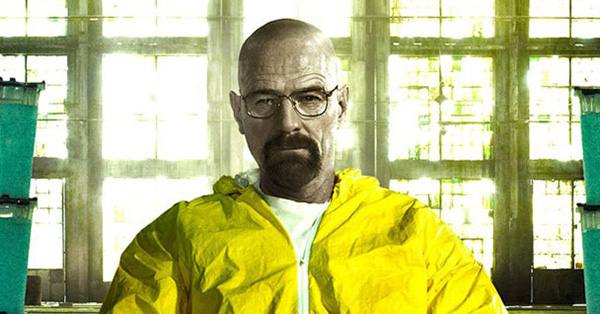