In addition to The CW's Arrowverse superheroes and Netflix's Defenders that return this year, new comic book characters from the worlds of Superman, Batman, X-Men, and more have our full attention. 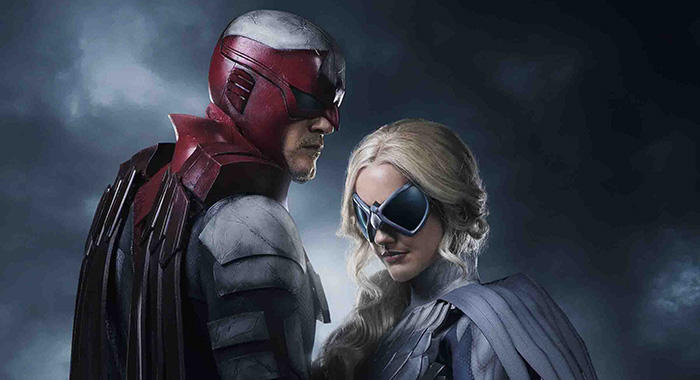 If you thought there was more comic book–inspired television than you could watch in a given week, 2018 will provide even more new series and a number of returning shows to completely cover your TV viewing hours with superpowers, super-angst, and even a few new concepts. There is even a mystery to be uncovered as New Warriors was expected to debut on Freeform this year, but the series will no longer air on that channel if it airs at all.

Nonetheless, there are still plenty of 2018 shows to be excited about. Here are the ones we are looking forward to.

Why We’re Looking Forward To It: The winter finale left Kara (Melissa Benoist) at her most vulnerable after Reign (Odette Annable) beat the living daylights out of her. When the series returns, Supergirl will be in a coma while Mon-El (Chris Wood) awakens Brainiac 5 (Jesse Rath) from his hypersleep chamber to help Kara. And once Kara recovers, the fireworks will come fast as she tries to stop Reign and gets to know Brainy, a favorite of Legion of Superheroes fans and Kara’s comic book counterpart.

Why We’re Looking Forward To It: In the first part of the fourth season, Clifford DeVoe (Neil Sandilands) turned out to be a formidable foe for Barry Allen (Grant Gustin). When the series returns, The Thinker’s next scheme — putting Barry on trial for DeVoe’s supposed murderer — will force The Flash to consider revealing his true identity, putting the rest of the team in jeopardy. And if that’s not bad enough, hobbling Barry is only a tiny part of DeVoe’s overarching scheme.

Why We’re Looking Forward To It: Unlike the other CW superhero series, Black Lighting will begin with the title character (Cress Williams) retired from the heroing business. And unlike Barry or Arrow‘s Oliver Queen (Stephen Amell), Jefferson Pierce will be a mature man who knows what he’s doing when circumstances force him to adopt the Black Lightning identity once more. Williams looks to be a strong lead amongst a predominately African-American cast, which also includes China Anne McClain and Nafessa Williams as his daughters Jennifer and Anissa, and Marvin “Krondon” Jones III as Tobias Whale, Black Lightning’s principle enemy. Also, his lightning powers look pretty cool.

Why We’re Looking Forward To It: Though we’re still unsure if the Black Hood’s identity was another dodge in larger mystery or just a really lackluster conclusion, the closing of Southside High and the return of Jughead (Cole Sprouse) to his old high school will surely ignite plenty of sparks as he runs afoul of Mr. Weatherbee (Peter Bryant). Meanwhile the Lodges’ (Marisol Nichols and Mark Consuelos) plans for the Southside will heat up with daughter Veronica (Camila Mendes) playing along. Or is she? Also, her friendship with Betty (Lili Reinhart) will hit the skids, potentially leading to the show dramatizing one of the oldest rivalries in comics. Newcomer KJ Apa completes the fabulous teen foursome as Archie in the Archie Comics–based series.

Why We’re Looking Forward To It: Krysten Ritter proved to be the best of the leads in, arguably, the best of Marvel and Netflix’s collaborations. Seeing her in the role of bitter private eye Jessica Jones made Marvel’s The Defenders a lot more enjoyable, and it’ll be good to have her back starring in her own series again as Jessica learns more about her mysterious past and powers. We also can’t wait to see what trouble Trish Walker (Rachael Taylor) gets into, especially if it leads to her adopting a certain heroic identity of her own.

Why We’re Looking Forward To It: While a Superman prequel series may seem like one the least likely concepts to make it to air, Krypton has a few things going for it. For one: the setting — two generations prior to Kal-El’s escape from the doomed world — is largely uncharted territory. As it begins, Superman’s grandfather Seg-El (Cameron Cuffe) attempts to restore the House of El to its former glory while heeding the warnings of timelost Earthling Adam Strange (Shaun Sipos), who has no problem telling Seg about Krypton’s impending destruction. Add a Brainiac (Blake Ritson) into the mix, and you have the beginnings of an interesting tale. And as Legion taught us last year, quality drama can emerge from mere scraps of comic book lore.

Why We’re Looking Forward To It: After a stellar, mind-bending first season, we were left with more questions than answers. Not that we expect Legion to answer a single one as the Summerland group search for the abducted David Haller (Dan Stevens) and rediscover the trail of Oliver Bird (Jermaine Clement) and Lenny/Amahl Farouk (Aubrey Plaza and a number of other people). And if the show can create more amazing moments like Lenny’s dance — one of our favorite moments in 2017 — and the “Bolero” sequence, it can definitely continue to avoid answering any of its mysteries.

Why We’re Looking Forward To It: The second season of Luke Cage will feature something fans have wanted since he left Jessica Jones’ corner of New York for Harlem: Heroes for Hire. Well, it may not be a fully formed version of Luke’s (Mike Colter) most important comic book superhero team, but part of the season will see Luke and Danny Rand (Finn Jones) working together and becoming better friends. And, really, Luke is the best person to bring the Iron Fist down a peg with some goodhearted trash talk and his ability to (mostly) endure what Danny can dish out. Also, Misty Knight (Simone Missick) gets a robot arm, which will no doubt take the fairly grounded Cage into interesting new directions.

Why We’re Looking Forward To It: Vincent D’Onofrio has not be shy in revealing his return as Matt Murdoch’s (Charlie Cox) primary opponent Wilson Fisk. We’re pretty much in agreement with his enthusiasm. Reportedly, the third season will take its cues from the “Born Again” comic book story line by Frank Miller and David Mazzucchelli, which sees Matt’s life systematically destroyed by the Kingpin, who has learned Daredevil’s public identity. Matt is also reunited with his mother Maggie in that story, but the end of The Defenders suggests their television reunion will happen sooner rather than later.

Why We’re Looking Forward To It: Wynonna (Melanie Scrofano) will also be reunited with her mother in the upcoming third season; though the final moments of the second season finale suggest they have been in contact for some time as events in Purgatory lead to the demon Bulshar’s escape from his century of imprisonment. Meanwhile, Dolls (Shamier Anderson) and Haught (Katherine Barrell) have a secret of their own, as the curse of the Ghost River Triangle continues to keep human and Revenant alike in eternal torment.

Why We’re Looking Forward To It: While Marvel’s Runaways proved there is plenty of ground to cover with superhero teen angst, Cloak & Dagger promises to be the first conscious attempt at a superhero love story. Olivia Holt and Aubrey Joseph star as Tandy Bowen and Tyrone Johnson, a pair of teenagers whose tentative first steps toward becoming a couple get interrupted when they discover they have mutant powers that work better in tandem with one another; although, it is unclear if the characters will be mutants in the series — their comic book counterparts were initially unaware they had the x-gene. It also remains to be seen how the pull to help people and fight superpowered adversaries will effect their emerging love affair. If nothing else, the show may prove you can tell superhero stories without relying on the team dynamics of The CW shows or the grittiness of the Netflix Marvel programs.

Why We’re Looking Forward To It: Gerard Way and Gabriel Ba’s Umbrella Academy was a surprise when it debuted on comic book shelves in 2007. The atmosphere might remind you of Hellboy or Grant Morrison’s The Invisibles, but the tale of a dysfunctional superhero family — who range in concept and powers from Gerry Anderson–style space explorers to dark vigilantes — was loving rendered by Ba. Netflix’s adaptation of the series will be headlined by Ellen Page as Vanya Hargreeves, the one member of the family without superpowers. Black Sails’ Tom Hopper and The Mortal Instruments: City of Bones‘ Robert Sheehan will also star as members of the Hargreeves family — one with the body of a Martian Gorilla and one with the ability to speak to the dead, respectively.

Why We’re Looking Forward To It: The Teen Titans are a perennial favorite supergroup whose popularity even rivaled the X-Men in the early 1980s. Their animated adventures thrilled a generation and even the current Teen Titans Go! continues to create fans of Dick Grayson, Raven, Starfire, Cyborg, and Beast Boy. Their first live-action outing is being developed by Greg Berlanti and Sarah Schechter of the various CW superhero dramas — so you have some idea of how the show will feel when it launches with the DC Entertainment streaming service later this year. If the early costume photos of actors Brenton Thwaites (Blue Lagoon: The Awakening, Gods of Egypt) as Robin and Alan Richtson and Minka Kelly (Friday Night Lights, The Path) as the superhero duo Hawk and Dove are any indication, it may be one of the most faithful comic book television adaptations yet.