We preview the exciting originals, ancitipated sequels, and everything in between set to hit theaters and streaming services in the next few months.

The last couple of years have been unusual for movies, to say the least, but when it comes to horror, cinema is thriving. This year has already seen some acclaimed, highly successful, nightmare-inducing spookfests. But that was all child’s play compared to what is to come. We are fast approaching Halloween season, and you know what that means: wave after wave of horror movies all competing for your screams! With some incredible films to look forward to, from originals to anticipated sequels and everything in between, here is your preview guide to the thrillers and horror movies of Fall 2022.

Rental homes are scary; let’s just admit that. Staying at someone else’s home, not knowing what they’re hiding, can give you goosebumps. At least, that’s what Barbarian is counting on. The film stars an unfortunate protagonist who discovers her rental home is double booked. The film is riding on some early buzz from a San Diego Comic-Con screening, so get ready for a thrilling experience with surprising twists and turns, plus Bill Skarsgård’s return to horror.

Speak No Evil has been on our minds (and our nightmares) ever since it premiered at this year’s Sundance Film Festival. The film turns making friends as an adult into a trip through hell, as it follows a Danish family vacationing in Holland with a Dutch family they meet along the way, lulling the audience before turning into an uncomfortable, gut-wrenching experience. It is an endurance trial, an exploration of how far people will go not to make others uncomfortable, and an edge-of-your-seat experience.

After wowing audiences with his return to horror in X, Ti West immediately shocked audiences with the reveal that he already had a continuation in mind. Not only that, but he had already filmed the film. Pearl takes us back in time to tell the untold story of the titular Pearl, the elderly villain of X — and apparently the story of the hungry alligator in the swamp next door. Exchanging 1970s slasher aesthetics for technicolor wonder, Pearl promises lots of gory deaths, surprising twists, and the origin of a monster.

This remake of the 2014 sleeper hit from Austria stars Naomi Watts in the title role, a woman who returns home to her twin sons after undergoing some plastic surgery to her face. When she begins to behave in strange and unfamiliar ways, the boys begin to suspect the woman beneath the bandages may not, in fact, be their mother.

Even with two trailers out, we still know rather little about what Olivia Wilde’s highly anticipated Don’t Worry Darling has in store for us. All we know is that the film has a stellar cast, including Harry Styles’ second major role after Dunkirk, and the story follows a happy couple moving to a company town. Add a bit of a The Stepford Wives overtones, a highly secretive company, and a utopian community with some big secrets, and you have the recipe for an unsettling psychological thriller.

One of the handful of franchises looking for a resurrection in 2022, Hellraiser represents a reboot of Clive Barker’s original 1987 film, and it will follow a young woman who faces sadistic supernatural forces behind the puzzle box responsible for her brother’s disappearance. This one is a Hulu exclusive.

Smile was already in the running for the horror film with the most effective jump scare of 2022, even before it opened. A movie about a curse with a plot that will be familiar to fans of J-horror hits like Ringu, Smile follows a doctor who begins to experience weird and horrifying occurrences after witnessing an incident involving a patient. Is there really something after her or is it all in her head? Why is everyone smiling? Watch the film and find out.

It’s been 300 years, right down to the day, but now the witches are back! The family-friendly ’90s horror favorite about three 17th-century witches resurrected by a virgin lighting a black candle is getting a sequel after 29 years and anticipations are through the roof. Bette Midler, Sarah Jessica Parker, and Kathy Najimy are all back, and when the Sanderson Sisters are resurrected once again, they will be hungry for revenge, and horror will descend on Salem again.

Adapted from Grady Hendrix’s novel of the same name, My Best Friend’s Exorcism is described as “Beaches meets The Exorcist” and that is enough to make us intrigued. The film is set during the Satanic Panic of the 1980s and mixes demonic possession with a sweet story about friendship, following two high school sophomores and best friends whose friendship is tested when one of them is possessed by a demon. Eighth Grade’s breakout performer Elsie Fisher stars in this horror comedy, which is produced by Happy Death Day’s Christopher Landon.

This adaptation of the Stephen King novella of the same name focuses on a young boy who befriends a wealthy, elderly neighbor named Mr. Harrigan shortly before the man passes away. Soon enough, however, the boy discovers he can communicate with Mr. Harrigan through the phone he was buried with. The role of Craig, the boy, is played by Jaeden Martell, who already has a Stephen King film under his belt (IT), while screen legend Donald Sutherland takes on the role of Mr. Harrigan. 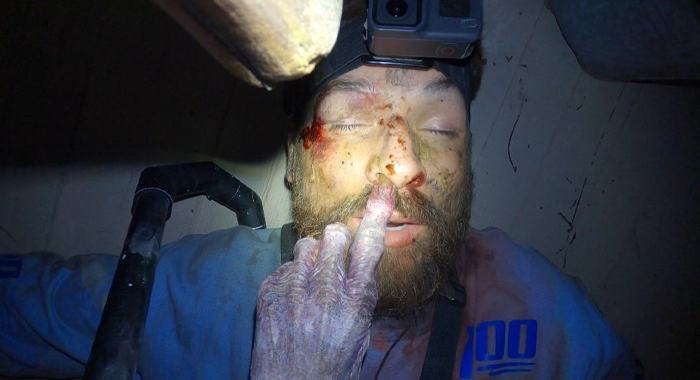 A horror comedy that mixes old-school with new-school, Deastream feels like ’80s Sam Raimi traveled to modern time, got obsessed with Twitch and livestreaming culture, and decided to make Evil Dead all about the dumbest stunt streamer in existence. The film follows a disgraced and — worse yet — demonetized internet personality trying to win back his followers by livestreaming himself spending an entire night alone in a haunted house. Of course, things go wrong, and buckets of blood will be spilled. Deadstream got very positive reviews out of its SXSW premiere, and seems to be a good addition to your Halloween watchlist. 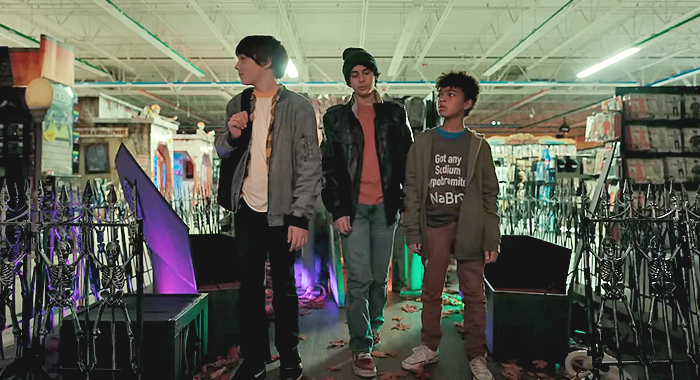 (Photo by Strike Back Studios)

What if you got locked in a toy store overnight? What if that toy store was a Spirit Halloween store? Very cool, right? Well, think again. What no one (and also everyone) thought could actually happen is happening, and we’re getting a movie about Spirit Halloween, the ubiquitous seasonal decoration store that magically materializes in every city every fall. Taking a kid-friendly horror approach to something like Five Nights At Freddy’s, the film follows three middle school friends locked inside the iconic store on Halloween night. To complicate things, they encounter an angry spirit that possesses all the creepy animatronic characters and toys you can actually buy at Spirit Halloween. Also, who doesn’t want to see Christopher Lloyd in a horror film? 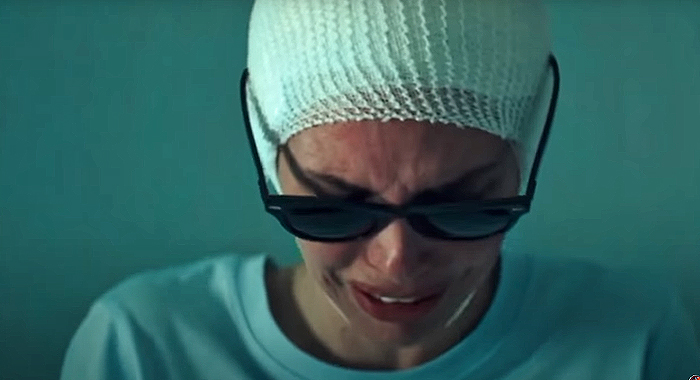 Legendary director Dario Argento is making his triumphant return to horror after a 10-year absence with Dark Glasses. The giallo is set in Rome and follows a prostitute who escapes a serial killer’s attempt on her life but is blinded in the process. As she recuperates from the attack, she meets a young boy that helps her. Argento’s return to horror after a decade is reason enough to see this slasher, if only to see if the master still has what it takes to terrify and thrill audiences.

David Gordon Green’s Halloween legacy sequel trilogy comes to a close, promising to deliver the actual (for real this time) final battle between Laurie Strode and Michael Myers. We don’t know a lot about the film, but we do know that it takes place four years after the end of Halloween Kills, wherein the entire town of Haddonfield came together to make “evil die tonight” and utterly failed at it. Though no one has seen Michael Myers, horror returns to Haddonsfield when a young man is accused of killing a boy he was babysitting. 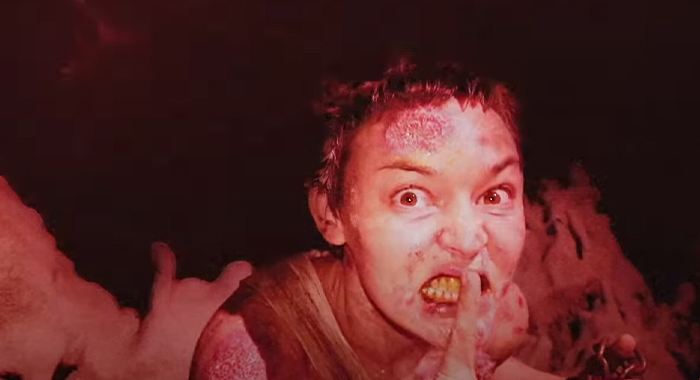 The V/H/S franchise is back! The anthology film series is set to return this year with new horrifying stories set at the dawn of a new millennium, presenting new found-footage scares. There are no plot details yet, but the directors chosen for this entry, like Johannes Roberts (47 Meters Down, The Strangers: Prey at Night) and musician-turned-director Flying Lotus, are very exciting.

There’s a global epidemic of demonic possessions, so the Catholic Church starts looking for new exorcists, even agreeing to train a young nun, traditionally forgiven from performing exorcisms. A twist on the exorcist horror subgenre, Prey for the Devil wants to stand above the countless other movies about demonic possession with a new hero.

Henry Selick, the mind behind suck stop-motion classics as The Nightmare Before Christmas and Coraline, and horror sensation Jordan Peele are teaming up, so get ready for some delightful nightmares. The film follows two demon brothers who enlist the help of a tough 13-year-old girl with a lot of guilt to summon them to the land of the living. In return, they take her on a bizarre adventure. Even without a lot of footage to go on, Peele’s horror comedy mind and Selick’s eye for gorgeous stop-motion animation makes for a must-watch film for fans of all ages.

Never accept a dinner invitation, especially if its on a secluded island. That seems to be the takeaway of The Menu, a culinary horror film about a fancy dinner party for the ultra-wealthy that quickly spirals out of control, and it seems at some point body parts become part of the menu — not something you usually see on Top Chef. The film features a superb cast, and director Mark Mylod has hit series like Game of Thrones, Shameless, and, perhaps most appropriately, Succession on his resume, so expectations are understandably high.

For a bit of a different angle on the genre, Luca Guadagnino (Suspiria) returns to horror – and reunites with his Call Me By Your Name star Timothée Chalamet – for this adaptation of the Camille DeAngelis novel of the same name. The romantic thriller stars Chalamet and Taylor Russell (Waves) as a pair of lost souls in 1980s America who find each other and embark on a road trip across the country. Oh, and they also happen to be cannibals. In other words, an appetizing treat just in time for Thanksgiving. 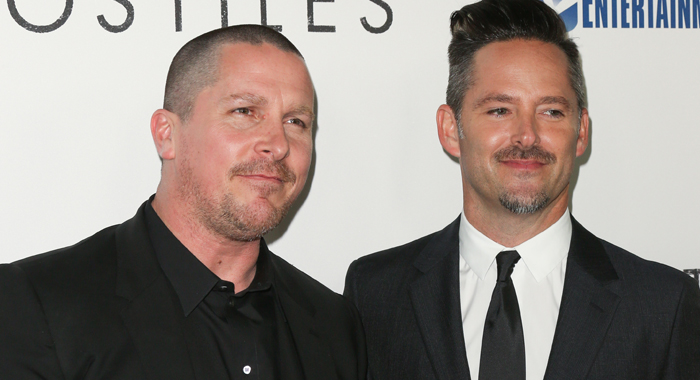 Scott Cooper returns to horror following his terrifying Antlers with The Pale Blue Eye, which reunites him with Christian Bale for a story about one of the biggest names in horror literature. The film follows a veteran detective investigating a series of murders in a military academy, with a young Edgar Allan Poe assisting him. The Pale Blue Eye is based on Louis Bayard’s Gothic thriller novel of the same name, and given the names involved this should be a detective story worth paying attention to.