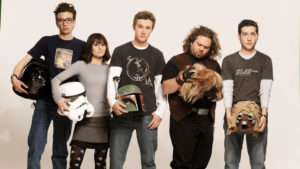 Fanboys (2009, delayed 2 years)
The Weinsteins strike back! This raunchy paean to Star Wars worship features a group of friends (one of them dying of cancer) plotting to break into Skywalker Ranch and steal a workprint of The Phantom Menace. After production, the Weinstein Company hired another director to shoot new vulgar scenes and tested versions with the cancer plotline cut. The movie was eventually released as an amalgamation of the original and reshot versions.