Catch up with who's possessing who at the start of a new season of Sabrina, and find out what new threats will force the witches to rally around the Devil they know.

Chilling Adventures of Sabrina returns this week for what Netflix calls “Part 3” and it seems like forever since we spent any time in Greendale — Part 2 debuted last April.

The series, about a teenager who tries to manage her witchy responsibilities with a more normal, human adolescence, is a far cry from both of the Archie Comics that inspired it: the classic Sabrina the Teenage Witch and the more recent Chilling Adventures of Sabrina, which recast her into a gothic horror mode. But it redrafted many of those ideas into something often compelling and something with a strong through-line — Sabrina’s attempt to create an accord between the witch and mortal world, even if demonic powers often tempt her towards a darker side.

But as it grew in its first two parts, Sabrina also became a show about her family, her friends, and at least a little bit about Greendale itself — a quaint American town whose fascination with the macabre may stem from it being located in the same place where Lucifer Morningstar (Luke Cook) fell from grace eons ago.

With that in mind, there’s plenty to recall, so let’s take a quick refresher on Sabrina and the world which surrounds her. 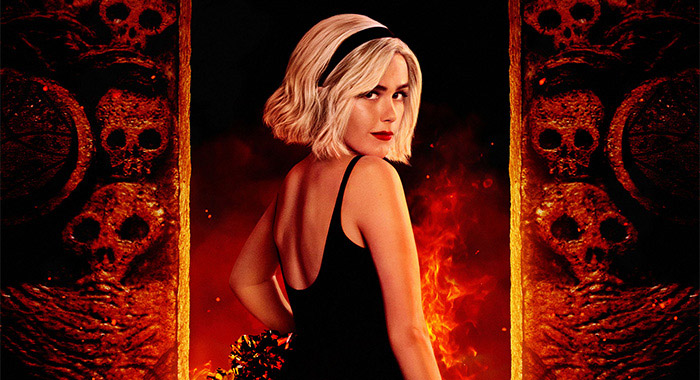 In a bid to save her Greendale, Sabrina signed her name into the Book of the Beast and completed her Dark Baptism, as is tradition in her coven. She also transferred to the Academy of Unseen Arts, a school for witches and warlocks. Along the way, she broke up with her mortal boyfriend Harvey Kinkle and began dating Nicholas Scratch. Nevertheless, she tried to maintain her human ties – going so far as to plan exposing herself as a witch to the Greendale locals.

This ultimately failed as Father Blackwood, leader of the Church of Night, inched ever closer to putting Sabrina under his sway. But that attempt also failed as Lucifer is actually Sabrina’s father and Sabrina resurrected herself as the Herald of Hell — a display of power which makes her uniquely suited to rule by her father’s side. Not that she wants any of that, though. She has school to consider.

Instead of journeying to Hell as its queen, she will enter its gates to retrieve Nick (more on him shortly). And if that works out, she might learn more about her mother’s side of the family. 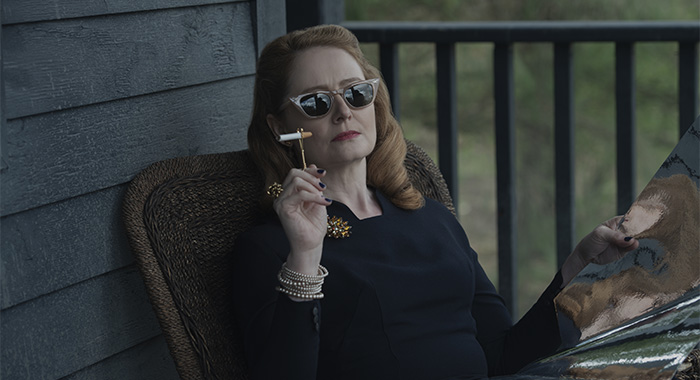 Aunt Zelda’s affair with Blackwood continued into a full-blown marriage. But life with the ambitious Church of Night leader was anything but blissful. Eventually, Zelda returned home to the Spellman Mortuary, losing access to the Blackwood twins in the process. But by the time Satan returned to the world, she was solidly devoted to preventing him from taking Sabrina as his bride. And for all of her troubles, she declared herself the High Priestess of what remained of the Church of Night. 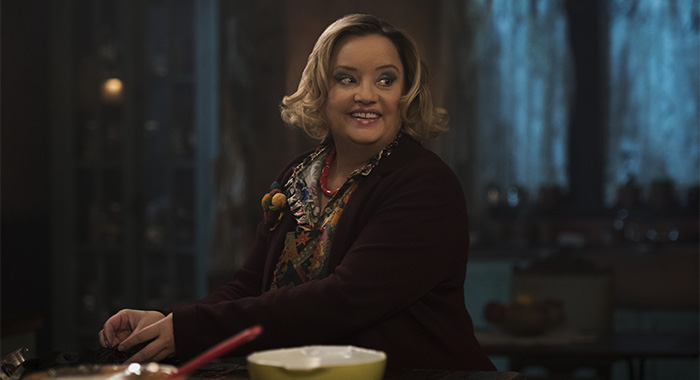 Aunt Hilda sought more autonomy from her sister as Part 2 wore on. At first, she decided to get a mortal job at the bookshop-café in town. She then pursued a relationship with the business’s proprietor, Dr. Cerebus (Alessandro Juliani), only to learn he was possessed by an incubus. Meanwhile, she also braced for a life without her sister by planning Zelda’s wedding. The two would eventually live under one roof again, but the desire for her own life continues to press at their bond. 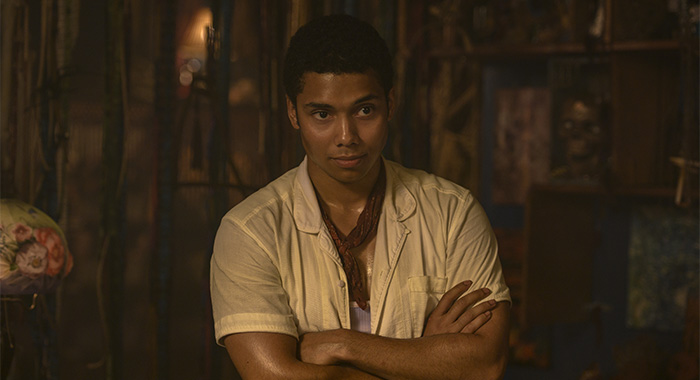 Blackwood’s plan to break the family apart led to Ambrose getting an early release from his centuries-long house arrest for an attempt to blow up the Vatican. He also became part of Blackwood’s inner circle — the Judas Society — and began dating Luke Chalfant (Darren Mann), another of Blackwood’s elite students (who was later killed by a band of witchunters). His loyalty waned as he came to know Blackwood better and, ultimately, stood against him when his ambition to turn the Church of Night into his own cult of personality was revealed.

Oddly enough, Ambrose will spend at least a portion of Part 3 hunting his former mentor. 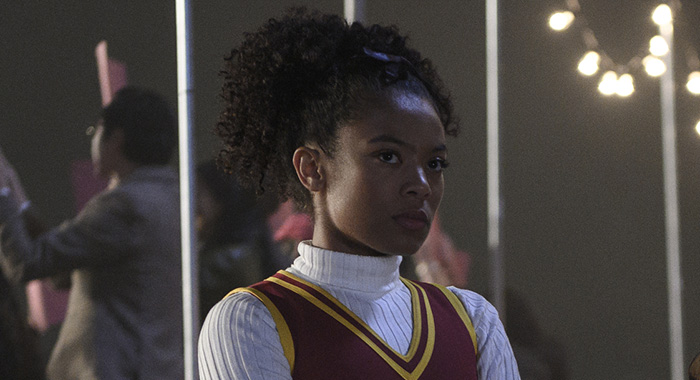 After accepting the loss of her eyesight — and the reciprocal clairvoyance (aka “the Cunning”) she would receive as a consequence — Roz’s regular vision was restored thanks to Sabrina’s heightened powers. It may have blunted the storyline a bit, but at least Roz retained the Cunning. During this time, she and Harvey found themselves getting closer together and, finally, dating after confessing their growing affection to Sabrina. Things did not go smoothly at first — and reportedly they will still be bumpy — but what teenage romance is truly perfect? At least Roz has her best friends around her to face whatever chaos may yet come to Greendale. 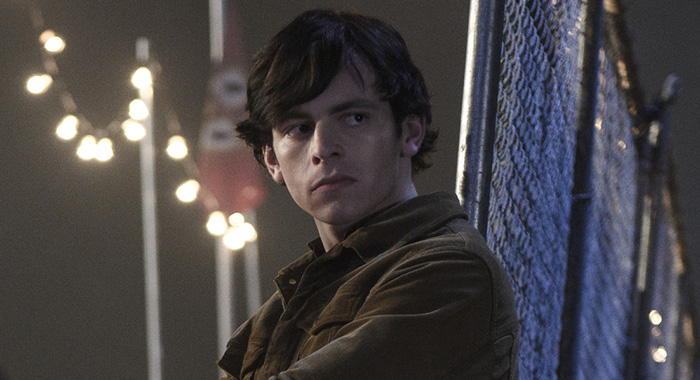 Still reeling from his brother’s disquieting resurrection and Sabrina’s use of magic, Harvey began learning about the Kinkles’ family history as witchhunters. This fell by the wayside as he began to focus on Roz and learned that witches may not be the heartless monsters his grandfather believed them to be — even if he and Nick never really got along. But his specific knowledge made him essential in standing up to Hell’s hordes within the family’s mine — the place where Earth and Hell meet. And on the other side of the tumult, he found his friends united as a team, which he named “Fright Club.” Their first mission: rescue Nick. 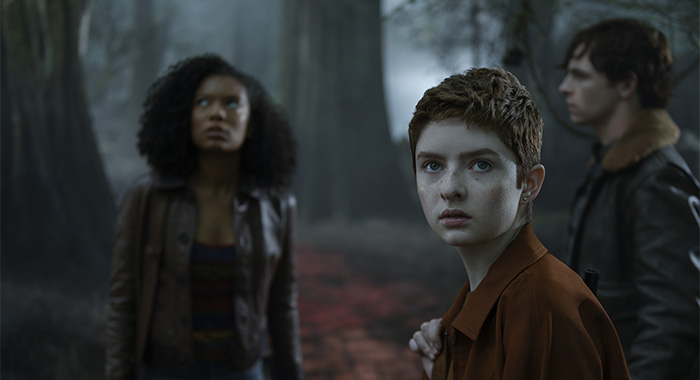 Though Susie Putnam’s transition into Theo was seeded in Part 1, they would not make the leap until Part 2. Along the way, Theo had to face the reactions of their friends and father. It mostly worked out, even if there were some conflicts to sort out. More difficult was the emerging family history between the Putnams and the Spellmans. Nonetheless, they were willing to help Sabrina defend the world from Hell’s armies by literally standing at the gates of the inferno and joining the Fright Club.

And for all their troubles, Theo may finally find a teenage romance of their own in Part 3. 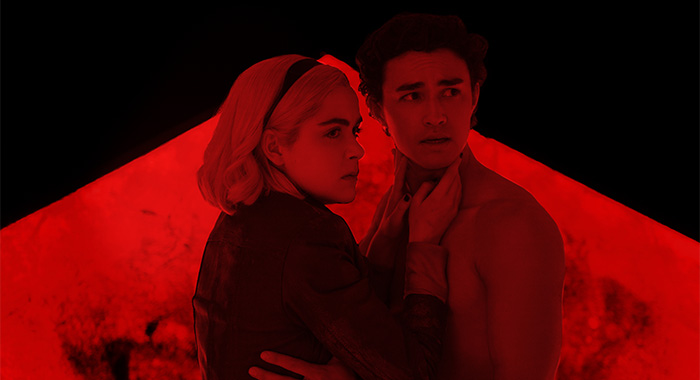 Nick’s attraction to Sabrina led to something quite surprising: an empathy for the world. Fully converted to Sabrina’s way of thinking — even if he still had to betray her to Lucifer along the way — Nick was willing to sacrifice everything not just for her, but for a world where witch and mortals live free of the Dark Lord’s subjugation. And sacrifice he did, becoming a prison for Satan and being taken bodily into Hell at the conclusion of Part 2. 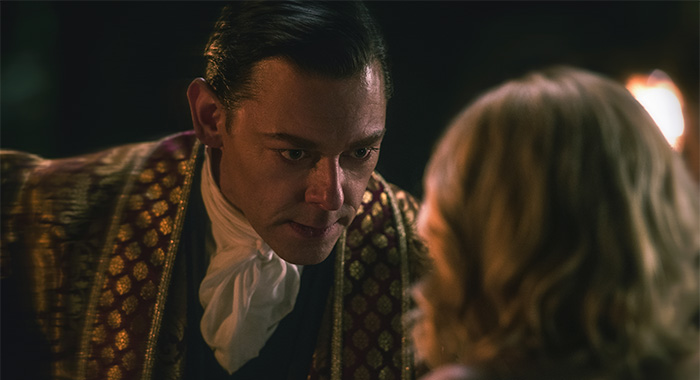 Father Blackwood had a plan for the Spellmans and, indeed, his flock. His hatred of Sabrina’s adoptive father, Edward Spellman, transferred to the others and he hoped by upholding Hilda’s excommunication, forcing Sabrina to attend the Academy, bringing Ambrose into his circle, and marrying Zelda, he would force the family to disintegrate. Without out their meddling, he would be free to pursue conservative reforms and transformer the Church of Night into his own cult of personality: the Church of Judas. This proved untenable when the Dark Lord returned in his angelic form and commanded Blackwood to report to Sabrina, the new Queen of Hell. Blackwood would not have it and attempted to poison the entire coven instead. A few survived, but it was the end of the Church as the Greendale coven had known it.

But before any justice could find him, Blackwood absconded from the area with his infant twins, leaving his illegitimate daughter Prudence (Tati Gabrielle) vowing revenge. 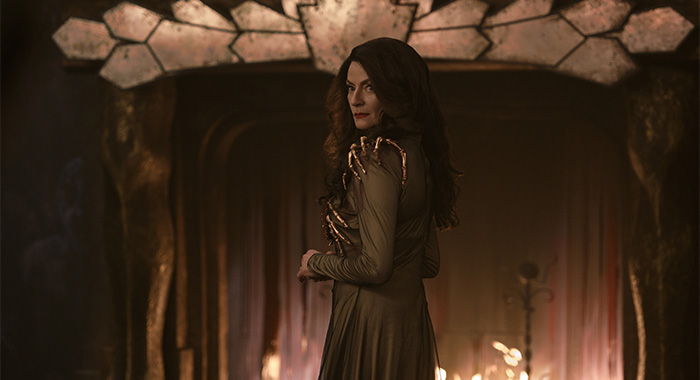 The Devil’s first handmaiden, Madam Satan began Part 2 as the new principal of Baxter High and Sabrina’s primary confidant. This disintegrated as she pushed Sabrina to fulfill a prophecy allowing Lucifer his original form. But even as she furthered his design, she began to doubt she would ever rule by his side, particularly as he began to announce plans for Sabrina to be his queen. She also revealed herself as Lilith, the First Woman, who quit Eden and tended to Lucifer after he fell. Reliving her past and explaining herself to Sabrina led her to aid the young witch as it would put her in the frame to rule Hell.

In the fallout, Madam Satan — now going by Lilith again — returned to Damnation to be its queen. But taming the inferno proves a challenge for this would-be ruler.

Part 3: Of Pagans and False Devils 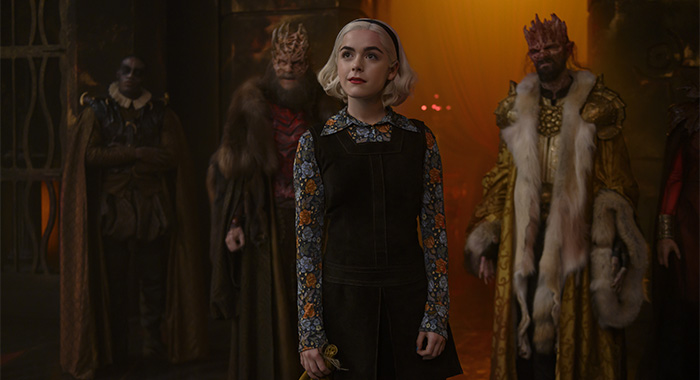 As is now the custom for Sabrina, Part 3 will pick up shortly after Part 2 and see Sabrina attempt to rescue Nick. In the process, she will learn her dethroning of Satan has broken the faith within the Church and the order of the universe itself. And as she always tries to clean up her messes, Sabrina returns to Hell in Part 3 and faces a new threat in the form of pagans who’ve set a course for world domination under their ancient gods, inspiring the witches of Greendale to fight for the Devil they know.

Which all feels like par for the course with Sabrina. Her convictions have led to a lot of disorder. But sometimes chaos is a good thing and, perhaps, Sabrina will finally be a place to put some of that disarray into a new normal. Or, maybe, this is still part of Satan’s design, and she will have to find new ways to defy his expectations.

The Chilling Adventures of Sabrina Part 3 launches on Friday, January 24 on Netflix.