The New Mutants will be a trilogy, Daisy Ridley and Josh Gad join a superhero comedy, and Morgan Freeman will play Colin Powell.

Today’s Ketchup brings you another ten headlines from the world of film development news, covering such titles as The New Mutants, Solo: A Star Wars Story, and new roles for Dave Bautista and Daisy Ridley. 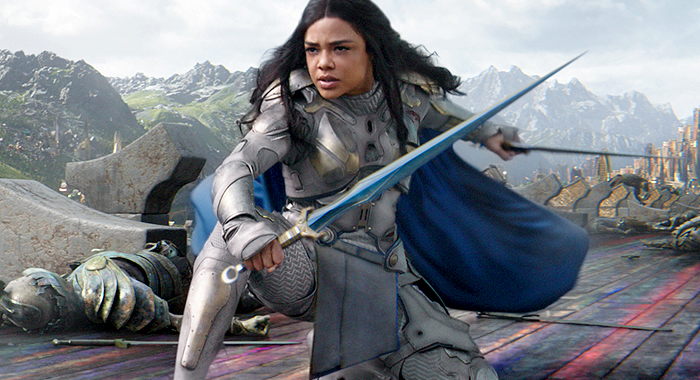 We may or may not ever get a Black Widow solo movie, but Marvel Studios is slowly adding more female superhero leads. Evangeline Lilly will be the first next year in Ant-Man and the Wasp (7/6/18), followed in 2019 by Brie Larson as Captain Marvel (3/8/19). Tessa Thompson is joining the MCU in a few weeks as Valkyrie in Thor: Ragnarok, and during filming, she pitched Marvel head Kevin Feige on another female-led project, Lady Liberators. As Feige replied, Lady Liberators is indeed a “deep cut,” but so was Guardians of the Galaxy. The all-female Lady Liberators super team has never had its own comic series, but it dates back to the 1970s, and Thompson’s Valkyrie (or someone pretending to be her) is frequently a member. Marvel doesn’t have the movie rights to a few of the Liberators, like Invisible Woman, Medusa, and Storm, but they could certainly make a movie around such existing MCU characters as Black Widow, Patsy Walker, Scarlet Witch, Valkyrie, and Wasp, plus new characters they could introduce, like She-Hulk, Spider-Woman, and Tigra. Of course, Marvel hasn’t made any official announcements about a Lady Liberators movie. Yet.

1. X-MEN SPINOFF THE NEW MUTANTS TO BE THE FIRST OF A HORROR TRILOGY

Especially for people unfamiliar with the original comics, the focus on horror in the trailer for the X-Men spinoff The New Mutants may have been confusing. Although they are “superheroes” in a traditional sense, many of the members lend themselves to the horror genre. Wolfsbane (Maisie Williams from Game of Thrones) is a werewolf, Magik (Anya Taylor-Joy) can teleport to demonic dimensions, and Dani Moonstar (newcomer Blu Hunt) can make people hallucinate their worst fears. Director Josh Boone (The Fault in Our Stars) revealed this week that The New Mutants is actually planned as a horror trilogy, with each film representing a different type of scary movie. Next year’s first installment (4/13/18) will represent “rubber reality,” and then, as Boone puts it, “our take was just go examine the horror genre through comic book movies and make each one its own distinct sort of horror film.”

So many movies these days are adaptations, remakes, or sequels that when a new project shows up that’s none of the above, it can be a bit surprising. This week’s example is an untitled comedy from the screenwriting twin brother team of Aaron and Jordan Kandell, who have previously been credited on Disney’s Moana (they also wrote Shailene Woodley’s upcoming hurricane survival drama Adrift). The Kandells are now working on a “superhero comedy,” which started as a story idea from Josh Gad (Frozen), who is also producing. In addition to Gad, the untitled film also has Daisy Ridley (Star Wars: The Last Jedi) and Luke Evans (Beauty and the Beast) attached to costar. What we don’t know, however, is pretty much everything else, including what Josh Gad’s comedy concept even is.

Six-time WWE champion Dave Bautista obviously lads a lot of roles (Spectre, Blade Runner 2049, and Marvel’s Drax) because of his intimidating physical presence. His latest role, however, would ostensibly allow him to sit in a recording booth and eat carby snacks, because although it’s an “action comedy,” it’s also animated. Dave Bautista will voice “multiple roles” in Groove Tails, about a group of mice who “engage in a competitive street dance competition.” Jamie Foxx is producing Groove Tails and will also voice the lead character. Animator Cameron Hood, who has worked on several DreamWorks films like The Prince of Egypt, How to Train Your Dragon, and Kung Fu Panda 2, will make his directorial debut with Groove Tails.

4. CHRISTIAN BALE AND AMY ADAMS ARE UNRECOGNIZABLE IN THE DICK CHENEY BIOPIC

Ever since we first learned that Christian Bale was going to star in the Dick Cheney biopic, it seemed likely that the British actor would pile on the pounds for the role. Bale has previously gained weight for American Hustle, and conversely, he went near-skeletal for 2004’s The Machinist. Last month brought confirmation that Bale was indeed going that route to play the former Vice President, as this video demonstrates. It wasn’t until this week, however, that we finally saw Christian Bale in character as Dick Cheney, and the resemblance is remarkable. You can also see Amy Adams as Lynne Cheney, and she’s equally as unrecognizable. There’s no release date for director Adam McKay‘s untitled Dick Cheney biopic yet, but an “awards season” release in late 2018 seems likely/possible.

It was just last week that we reported that Tyler Perry will be co-starring in the Dick Cheney biopic as Secretary of State Colin Powell. Perhaps coincidentally (or not?), Morgan Freeman has also signed to star as Colin Powell in a separate independent biopic to be directed by Reginald Hudlin, who is coming right off last week’s Marshall, about the young Thurgood Marshall. Powell will be mostly set during the run up to the Iraq War, and Powell’s “now-infamous case for war to the United Nations Security Council. The evidence he presented was later discredited, and Powell has described the event as a low point in his career.”

Lone Wolf and Cub is the English-language title of an acclaimed manga (Japanese comic) series, published from 1970 to 1976 in 28 volumes, about a swordsmanship master who is forced to journey with his infant son in tow. Lone Wolf and Cub was adapted as a series of six Japanese films (the first two of which were cut into a film called Shogun Assassin for US release) and two different TV series, but to date, nothing native to the United States. Back in the early 2000s, Darren Aronofsky attempted to develop a Lone Wolf and Cub movie adaptation, and Justin Lin, director of Star Trek Beyond and four Fast and the Furious films, has been trying to get it made as a Hollywood film since 2012. This week, the project took an important step, as Lone Wolf and Cub is now in development at Paramount Pictures, and the studio has hired screenwriter Andrew Kevin Walker to adapt the series as a single movie (to begin with). Walker’s previous film credits have included Se7en, Sleepy Hollow, and 2010’s The Wolfman.

Although Harvey Weinstein is now fully separated from The Weinstein Company, the studio is still feeling the impact of the dozens of allegations against Weinstein. We reported on several projects that were affected last week, but another big one emerged this week. Channing Tatum, the star of 21 Jump Street and Kingsman: The Golden Circle, has pulled his adaptation of the Matthew Quick YA novel Forgive Me, Leonard Peacock out of a previous deal with The Weinstein Company. Tatum described the novel as “a story about a boy whose life was torn asunder by sexual abuse. While we will no longer develop it or anything else that is property of TWC, we are reminded of its powerful message of healing in the wake of tragedy.” Good for Channing. On the other hand, the Weinstein Company itself has pulled their Thomas Edison film The Current War out of this year’s awards season, delaying the Benedict Cumberbatch vehicle until sometime in 2018.

Although there were over 20 Abba songs in the 2008 musical Mamma Mia!, there were a few Abba hits that didn’t make the cut, like “Knowing Me, Knowing You,” “One of Us,” “Summer Night City,” and “Fernando.” When the sequel Mamma Mia: Here We Go Again! was announced for a tenth anniversary release next year on July 20, 2018, it seemed likely that some of those songs would make the cut, and it looks like that’s the case. In a series of tweets, singer-turned-Academy-Award-winner Cher announced her casting in the film and included lyrics from “Fernando,” posting, “Just went through two dance numbers, Everyone’s Great.” In addition to the various returning cast members (Meryl Streep, Amanda Seyfried, Colin Firth, Pierce Brosnan, others), other new stars include Lily James (Baby Driver), Jeremy Irvine (War Horse), and Andy Garcia. The original Mamma Mia! earned a Rotten Tomatometer score of just 54%.

1. DISNEY DROPS THE HAN FOR SOLO: A STAR WARS STORY

Following the model of Rogue One: A Star Wars Story, sources have long refered to the upcoming second anthology film as Han Solo: A Star Wars Story, which, it turns out, is close but incorrect. Director Ron Howard (Apollo 13, The Da Vinci Code) took to Twitter this week to announce that filming had wrapped, and also that the official title will be Solo: A Star Wars Story. The online reactions have varied widely, from positive to mocking/joking, as many people are pointing out that Solo sounds like a movie about those trademark red plastic cups. Alden Ehrenreich (Han Solo), Donald Glover (Lando Calrissian), Emilia Clarke, and Woody Harrelson will be starring in Solo: A Star Wars Story when it’s released next summer on May 25, 2018.