The Walking Dead Season 11: Showrunner Angela Kang on What the Final Season Has in Store for Fans

A premiere that plays like a video game cinematic. Maggie-Negan murderous looks. The Daryl-Carol spin-off setup. 24 episodes. A happy ending?

The good news for fans not ready to say goodbye to The Walking Dead is that it’s going to be a slow, drawn-out journey to next year’s series finale. And, as season 11 premieres, TWD showrunner Angela Kang offers something else for viewers to hang on to: some of the long-suffering zombie apocalypse survivors just might find happiness, or at least peace, before the drama signs off of AMC.

The second episode of the new season, for instance, ends with the hint of a major, positive, new development for one of Alexandria’s most beloved citizens. Dare viewers hope the characters might end the series on a high note?

“Yes. I will say yes,” Kang told Rotten Tomatoes. “I think that for many of our characters, happiness, joy, peace has been elusive. But there are ways that they find it. It may not always come in the form that they’re expecting. It may wax and wane at times. But yes, there is room for some happiness for some of our people.”

Of course, any happiness they do find is going to come sprinkled between a lot more suffering and loss, and that continues in the premiere. The Alexandrians are not only forced to rebuild much of the community after that destructive showdown with the Whisperers, but they’re frighteningly low on food supplies, with more mouths to feed.

Some, like Aaron (Ross Marquand), think they need to push through and get the crucial repairs to the walls completed, while others think they need to go on a massive food hunt so they can provide sustenance for that hard physical labor. Maggie (Lauren Cohan) even knows the exact place they can find all the food they’ll need for the near future, but, like with anything in their world, it’s going to require a dangerous mission to retrieve it.

Which brings up the question of how, after all they’ve been through, all the tragic losses, all the times they’ve had to start over and rebuild, how do Maggie and company find the gumption, the physical, mental, and emotional energy to keep going after all these years? 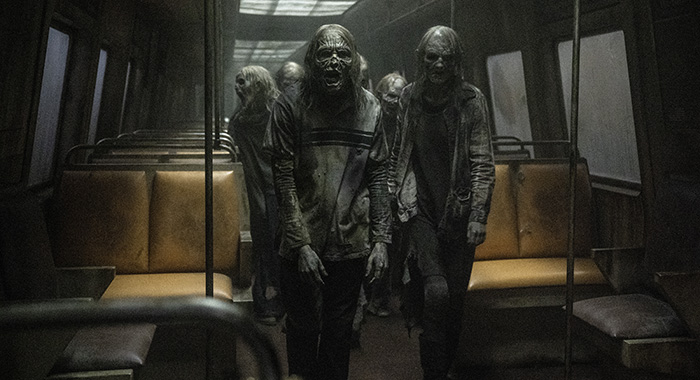 “I think for our people, they have just been struggling and struggling to survive, [but] they remember that there have been times that are good,” Kang said. “So they’re reaching for that. I think all of those folks who are parents, all the characters that just, regardless of whether they have people who are related by blood, they are all bonded together as friends and as people who’ve traveled a long, hard road together. And I think even for characters that don’t feel the gumption in themselves, I do think a lot of them feel the drive to help those that they love. And that’s, in some ways, what’s keeping them growing during a time when it feels like so much hope is lost.

“After everything they’ve been through, to have it fall apart after this long, it is really quite crushing for many of the characters. But I think a lot of them find themselves asking the question, ‘Can we actually rebuild from this when it’s just worse? We’ve been brought so low.’ So that’s just one of the things that they’re all grappling with as the season goes on,” she said. 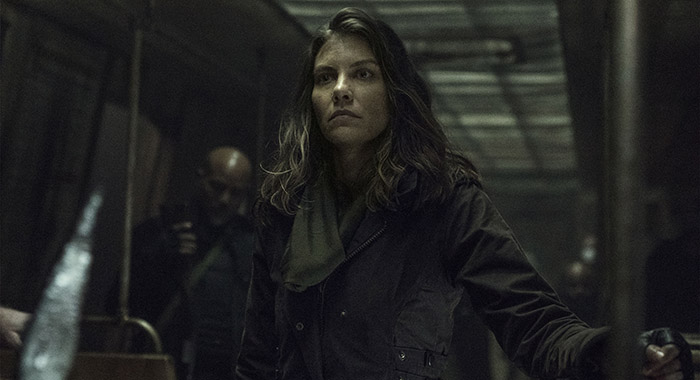 Maggie, in particular has a lot, and then some, on her plate. When she tells her friends about this source of food she can take them to, it requires finally sharing with them her most recent trauma, and, without spoiling specifics, let’s just say that particular trauma may not be in her past.

And speaking of bad things not in her rearview mirror, Negan (Jeffrey Dean Morgan) is very much still on Maggie’s mind, since she’s now living in the same community with the man who brutally murdered her husband right in front of her. Negan’s redemption was easier to buy since Maggie was out the picture, but as much as his friendship with Judith (Cailey Fleming) has helped us see him in a different light, seeing him through Maggie’s eyes, reminded of what he took from her and little Hershel Rhee (Kien Michael Spiller), has made it easy to understand why all she wants to do avenge Glenn’s death every time Negan enters her path.

And, again, no spoilers, but when they’re thrown together in the premiere, there are murderous thoughts all around. She wants him dead. He knows it (not like she’s trying to hide it). He knows the only way he’s going to survive is to change her mind about him, or make sure she dies first. Bottom line, it’s tough to see how both of them are still standing by series’ end. 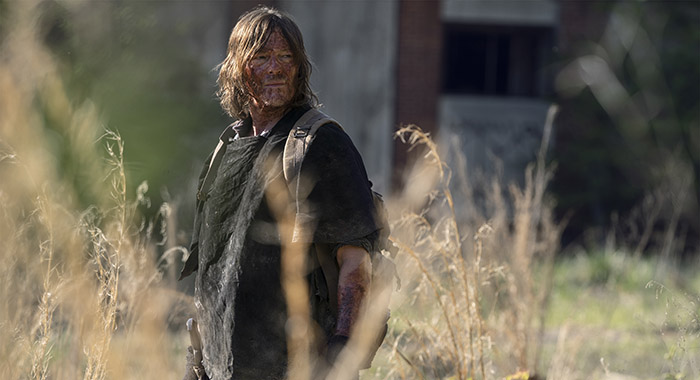 Which brings us to the goals for this final season of the original series — the spin-offs, including the upcoming Kang-led sequel featuring Daryl (Norman Reedus) and Carol (Melissa McBride), will go on. What do the writers hope to wrap up? Where do they hope to leave the group in general?

“The thing that’s interesting is, when we started work on the season, we didn’t know that we were starting work on what was going to wind up being the last season of the show,” Kang said of the supersized season, which will consist of 24 episodes, released in batches of eight each, through 2022.

“But hopefully whenever we’re writing, we’re always writing with the viewpoint in mind of like, ‘We have to tell a story that feels really, really cool. We hope it leaves people wanting more,’” she said.

“As we get further into the season, there are definitely places that we want to land people at the end of the series. But plotting that out is not even entirely different from what we try to do every year, which is think about, ‘Where are our characters at? Where do we want to leave them when we end the season?’ It’s just that, obviously, it takes on a different level of importance, so we really spent a lot of time talking about each person and what their journey might be,” she said. 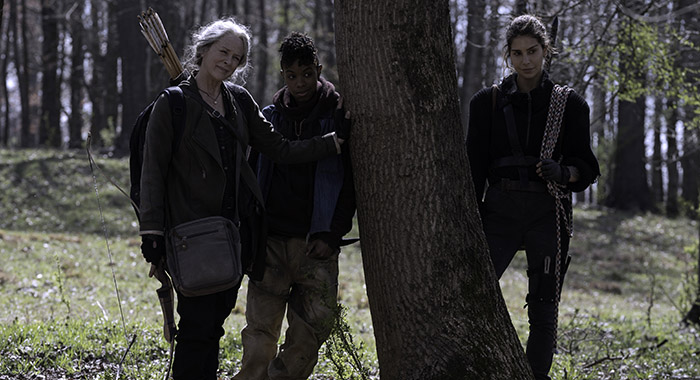 And how did Kang and the other writers and producers think about the season, and how it would end, in terms of Walking Dead fan expectations?

“I find that our fandom, it stretches across different people with different taste, so depending on the person you ask, I really think you’re going to get a very different answer,” said Kang, who’s worked on TWD since she was hired as a story editor in season 2. “I think the core of what holds the fans together is that they care about the characters and want to feel that they’re watching a story about them that allows them to understand more about what they’re thinking and what they’re working through and how hard they’re fighting to survive. And I think obviously they do like that there’s a sense of adventure stakes, like the scares, and, yet, feeling like people can overcome when they need to by standing together.

“Those of us that work on the show, all of us love the show, we love the comics, we love the genre. So I think we lean toward our internal sense as fans ourselves of what’s entertaining for us and what we find moving or scary. Hopefully, those feelings are aligned with the audience, but we don’t always know, and we can’t always control that. We hope that people have a good time and get something out of it, even if certain fans go, ‘You know what? I didn’t really resonate with that particular episode, but then the next one I really love.’ And a lot of that is us realizing we’re writing for a variety of people. Even within our own writer’s room, there are certain stories or certain characters that people are really drawn to, or they go like, ‘Ah, that’s OK for me, but I really, really like this other thing.’” 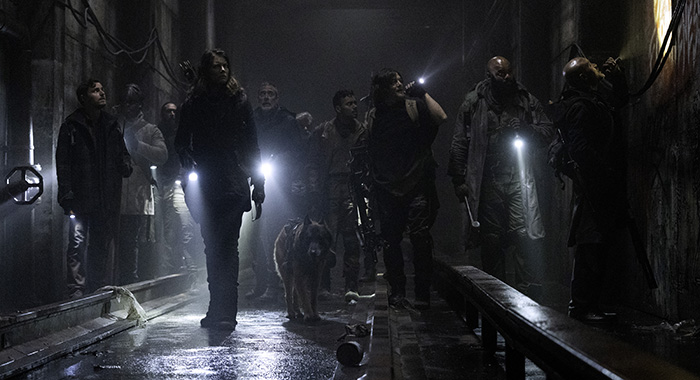 The first two episodes of the season, “Acheron: Part I and II,” feel like one feature-length story, and should include something for every fan’s taste, from an opening reminiscent of a certain iconic Tom Cruise movie scene and all the Maggie/Negan drama to a sweet reunion (Daryl hugs!) and that aforementioned ending for episode two.

“We definitely have a sense of ongoing story that also carries through some of this,” Kang said. “But as with every season we do, the show kind of reinvents itself every so many episodes. So we have some arcs that are more contained. And then within that, we sometimes have episodes that feel almost like their own little movie, and then we have some stories that are running (across) many episodes. So it’s a mix of all of that, over 24 episodes.”

The Walking Dead season 11 premiere is now streaming on AMC+ and airs at 9/8C on Sunday, August 22 on AMC.