The Tick Is More Absurd and More Emotional in Season 2

Can you smell the love muffins? Peter Serafinowicz and Griffin Newman discuss the evolution of their superhero-sidekick relationship in season 2 of the streaming superhero series.

A week before The Tick’s second season premiere, stars Peter Serafinowicz and Griffin Newman debuted the first episode of the new season at the show’s WonderCon panel. Following a Los Angeles press tour to promote the series, the duo sat down with Rotten Tomatoes for a relaxing lunch to discuss the upcoming batch of new episodes, including how titular superhero The Tick and sidekick Arthur Everest will evolve over the course of the season, the show’s satirical nature, and the episode devoted to fan-favorite Dangerboat.

With the defeat of The Terror (Jackie Earle Haley) at the end of the first season, The City faces a new day with superheroes returning in droves, supervillains appearing to fight them, and AEGIS — the government agency tasked with monitoring the superhero community — reopening its doors in town. But as Newman noted, AEGIS — and its plan to introduce a new version of the Flag Five superhero team — is an extension of something creator Ben Edlund has been playing with since The Tick’s comic book and animated incarnations.

“It’s the idea of it being an industry. So often superheroes are taken as just like this magical force in the world. You know, these brave people,” Newman explained. But the Tick and Arthur discover “there’s this sort of pettiness of the career jockeying” as other heroes try out for the team. “You understand how many different superheroes there are doing it for different reasons and the different levels of a career,” he said. “The concept is just funny to me. It’s like when you’re a kid and watch movies and think its so glamorous and magical. And then you get near the industry, you start working in it and around it and you’re just like, these are all people just doing their jobs and everyone comes in every morning with bad breath.”

The Tick’s lasting presence in pop culture is due in large part to the audience being able to relate to the titular hero’s experience, Newman said, “even in a thing that we don’t usually think of as a career.”

In all seriousness, though, the heroes gather in the office kitchen every morning and drink free AEGIS coffee just like everyone else. It’s a central place where the characters can hang out. While fan favorite characters like Batmanuel and Captain Liberty won’t pop up around the water cooler just yet, one classic Tick villain will appear in season 2, Newman confirmed. And AEGIS itself will also act as an antagonistic force of sorts as the Tick and Arthur learn how to deal with “the bureaucracy of being a superhero.”

“You have to file an incident report after you punched a bad guy,” Newman said. But that process will also opens up a grey area unfamiliar to the Tick, whose moral compass has always been binary. “There’s a lot of [Tick and Arthur] trying to figure out who the good people are and who the bad people are, because sometimes good people do bad things for the right reasons. And, sometimes bad people do good things for the wrong reasons.”

Pitching the Right Sort of Satire 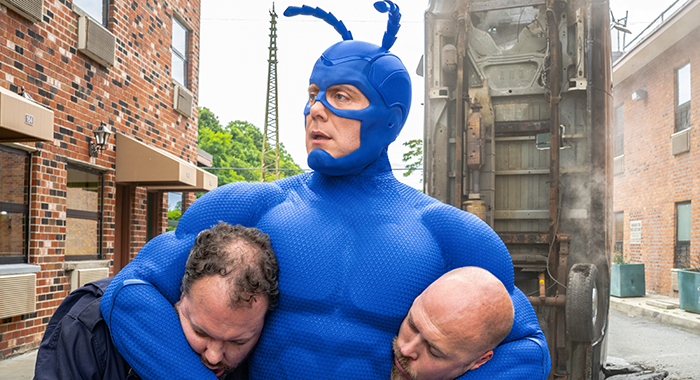 Like the fans who attended The Tick‘s WonderCon panel, Serafinowicz watched the season 2 premiere for the first time at the convention. Not only was he pleased to watch the episode with a group of eager fans, he was also excited to see the completed special effects and music and all the bells and whistles that Newman said “makes a big difference on a show like this.”

“We have these big set pieces and they’ve got to look good because they’ve got to compete with the latest Marvel movie,” Serafinowicz said. Or, at the very least, the show has to “attempt those standards” on a TV budget.

At the same time, The Tick really isn’t about the action set pieces.

“I think Ben’s whole notion, which I agree with, is the best way to satirize something is to come at it from a place of love and respect,” Newman said. “You can’t really properly satirize something unless you personally understand why it works in the first place. And secondly, you have to walk the walk. So if we’re going to make the show that’s satirizing other superhero shows, you sort of have to play at the same altitude that they’re like.” 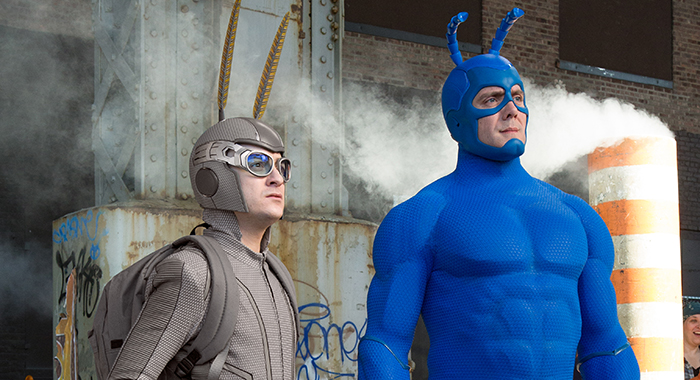 If one thing sets the new version of the show apart, it is a greater emphasis on the characters’ interior emotions.

“That’s the key to it all. That’s why I wanted to do it,” said Serafinowicz. “The sole focus of what we do as performers is the emotions.”

While the animated series and the 2001 live action show on Fox favored a broader tone, the more serialized nature of the Amazon series offers Edlund an opportunity to do something new with The Tick and Arthur. As Newman put it, “He took the characters as they already existed and then he sort of added an attic and a basement. There’s framing around them. … It’s so clear what this character is going through emotionally that all I have to worry about is doing it justice.”

At the same time, Serafinowicz believes the show has a key cultural touchstone to draw from that is not necessarily known for its emotional grounding: “The tone of the show is similar to the 1960s Batman,” he said.

Added Newman, “It’s our North Star. Those characters enjoyed fighting crime. It wasn’t a burden and it wasn’t about vengeance.”

In fact, the characters actually want to be there, which isn’t something that can be said about all modern superheroes.

“I read so many pilots scripts where the characters are defined by what they hate or what they don’t want to do. It’s so much conflict-forward in terms of the thing [the character] has to overcome,” Newman explained. “You realize how rare it is to see a show that’s about two people doing something that is inherently decent and it’s about their empathy for other human beings — wanting to take care of them and look after them — but also that they enjoy doing it.”

Of course, in the first season, Arthur took some time to realize he enjoyed being a hero, but Newman said that was an intentional part of the storytelling to get the character in an emotional space for the decision he makes in the first episode of season 2, which echoes Arthur’s introduction in the previous Tick live action show and animated series as a person who actively chooses to place himself in the middle of a superhero battle.

“[We] make him a little more well-rounded emotionally,” Newman explained. “So to get to that point, you understand why he makes the decision that he does. …Arthur’s not cocky, but he’s decided he knows why he’s doing it. He’s going to keep subjecting himself to something that he is terrified of and doesn’t think he can necessarily pull off because he feels, fundamentally, it’s the right thing to do.”

And what does this new phase in Arthur’s life mean for the Tick?

“What Tick wants more than anything is for Arthur to be his friend, to be with him all the time, so he couldn’t be happier,” Serafinowicz said. “Outside of everything else they have to contend with, I think in their relationship it’s quite simple. The Tick is like a happily married man.”

The domesticity that was baked into the previews versions returns in season 2, as it is important to Edlund to portray intimacy between two men “without [it] being couched in a bunch of jokes,” Newman said. “It’s about these two men [who] love each other and need each other to function and it’s not just double entendres.”

Added Serafinowicz, “It’s hard to pick a similar sort of relationship [in media] where it’s this very strong kind of buddy thing: two guys who just really, at the end of the day, think each other is pretty great.”

The two characters may be very different, but they work hard to find the common ground between them.

Giving The Tick And Arthur Their Voices

If there is one continuity between the three shows, it is the general sound of Tick’s voice. Serafinowicz said he avoided listening to the performances of Patrick Warburton (from the 2001 show) and Townsend Coleman (from the animated show) to give his Tick voice a chance to flourish into its own, but he did draw inspiration from Adam West’s Batman and a few other television sources.

“I spoke with Ben about the voice; about where I was coming from, which was a 1960s TV announcer voice, a bit like those Roger Ramjet cartoons,” Serafinowicz said. Like West’s Batman, the “enthusiastic pure happiness” to mete out justice is also key to giving the Tick’s voice its specific quality.

When he asked what sort of work Newman does to transform his voice into Arthur’s, the actor joked, “years of vocal training.” For the record, he then demonstrated a very close approximation of Tick animated series voice actor Rob Paulsen’s annoyed “Tiiiiick!” outburst.

The World Is Going To Become More Absurd 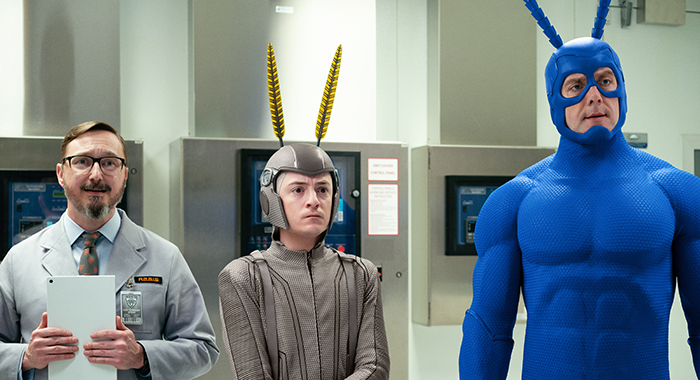 While the pilot saw Arthur questioning his sanity only for the Tick to bring the whole world into a hyper-reality, Newman said the goal is to keep escalating the level of absurdity.

“Everything starts to transform around The Tick. The colors get brighter and the performances get heightened, and the comedy gets more and more absurd,” he said, adding that if season 1 was about grounding the characters in a more emotionally rich universe, it becomes the foundation for things like talking dogs and the lobster creature seen in the season 2 trailer. “You don’t feel an ironic detachment from the thing. You’re laughing with the characters instead of at them.”

Elements of this change began as soon as production resumed after the pilot, with the Tick’s costume suddenly changing. That evolution continues with the characters getting closer to their more iconic silhouettes and Arthur remaining in costume throughout most of the second season.

“Hopefully it gets to the point where it just feels like what you remember the cartoon feeling like, but with all the work we put in establishing the emotional connection underneath that,” Newman added.

Dangerboat Is Getting an Episode 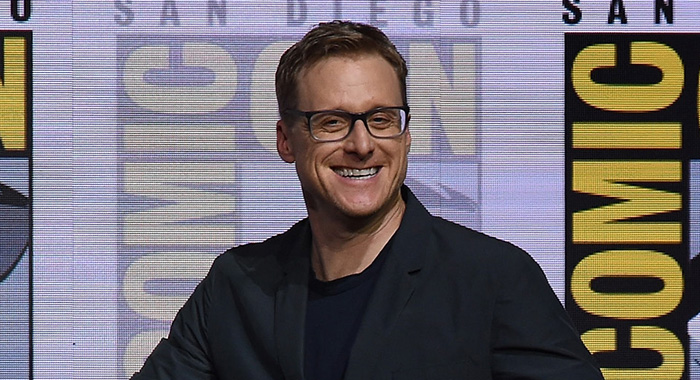 The scene-stealing Dangerboat will be the star of his own episode this year, but in keeping with the Tick brand of absurdity, Newman said it is a “a bottle episode that takes place inside of a character. The bottle is Dangerboat and the whole episode is us reckoning with him. It also sort of functions as an origin story for Dangerboat.”

Quipped Serafinowicz, “I suggested it should be called ‘Das Dangerboot.’”

The character, originally just a joke implanted in a set, grew when Edlund noticed how people connected with it.

“He started writing more and more to Dangerboat as a character, not just as a device,” Newman said, which means the actor is in the strange position of having a working relationship with a prop. Alan Tudyk, who voices Dangerboat, records his lines long after filming. On the day of film, Dangerboat is just a set. Nonetheless, the character is emblematic of what makes this version of The Tick so special. It has the latitude to be both ridiculous and grounded enough that, as Newman put it, “a boat can become an emotional fulcrum.”