With its cybernetic edge, potential for time travel, and a main setting 15-or-so years from now, Amazon’s The Peripheral is the sort of science fiction many are hungry for: a near-future story with wide, interesting implications. One of those is the very notion that humanity will survive to 2035, let alone an era in which a form of time travel is possible. And when Rotten Tomatoes spoke with star Chloë Grace Moretz recently, she suggested the series, based on a novel by William Gibson, has some hope buried in what could be perceived as a gloomy outlook.

“I would hope that something could happen similar to our story — that maybe we can have a little bit of more answers and a little bit of a roadmap to try to mitigate the impending doom that is the potentiality of what we’re all could be headed towards,” she said.

Moretz plays Flynne Fisher, a young woman living somewhere in the American south. While she toils away in a 3D printing shop, she also takes care of her ailing mother and helps her brother, Burton (Jack Reynor), when he gets high-paying gigs in a VR multiplayer game. As it turns out, she is more of a natural in game environments despite his military training, combat experience, and cybernetic implants.

Despite Burton being the face of their scheme, Flynne’s talent gains the interest of a peculiar client who sends her an advanced VR rig unlike anything seen before, which in turn appears to port her consciousness into a future London game scenario she can feel everything. Once there, she witnesses something that puts a target on her and her family.

And that’s just the beginning. 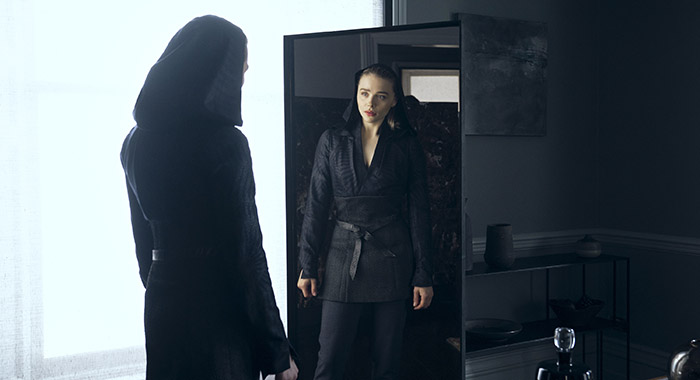 Creating that first seductive look into Flynne’s work for the client was the responsibility of director Vincenzo Natali and his team, who knew it had to be “a highly aesthetic, almost magical kind of place where the technology is so sophisticated, it’s invisible. And when it is visible, it’s there entirely for aesthetic reasons.”

“It was made easy because the future London that Gibson posited in his book is seductive,” Natali told Rotten Tomatoes. “Like a kind of Disneyland for Flynne. But what I love about the book, and of course the series as well, is that when you pull back that patina, you find something that is a little more frightening, dark, and forbidding.”

But as the book was first published in 2014, a few updates to its darker elements were required. An emphasis on methamphetamines on the page becomes a focus on pharmaceuticals on screen, for example. Spearheading the work was showrunner Scott B. Smith.

“I think Scott and his team of writers really just took the spirit of Gibson’s novel and ran with it because it’s only gotten more timely,” executive producer Lisa Joy said of Smith’s work. “The events that Gibson postulates in this novel had literally come to pass by the time we were filming.”

Production commenced as the COVID-19 pandemic, a real-life event similar to one in the background of the novel, continued to rage on. 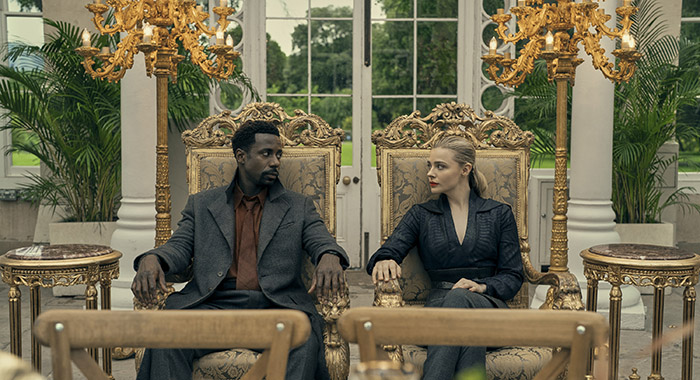 One character who may feel familiar to viewers coming with knowledge of the book is Wilf Netherton. Played by Gary Carr, he reflects a character with a different occupation from his novel counterpart, but, as Carr said, “some of the circumstances changed and some of the plot things, but his reactions to them is consistent.” It leads to someone who inspires empathy almost immediately, which is helpful as he soon becomes the viewer’s guide through the program’s seeming future state.

Here we’re using “future” to speak about a future after Flynne’s 2035. To executive producer Jonathan Nolan, Gibson’s ability to postulate both a near future and something more far flung was part of his attraction to the material. 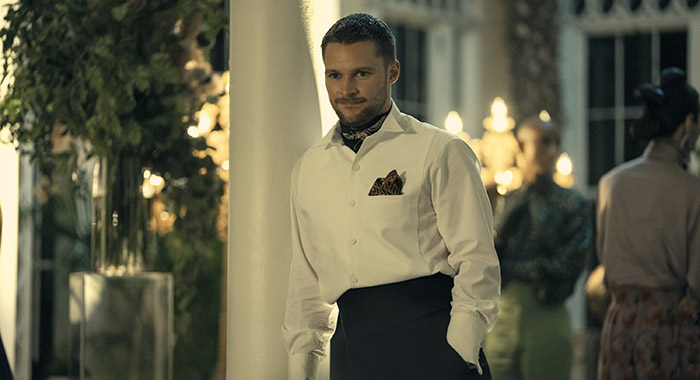 In the 2035 part of the program, both Flynne and Burton offer a viewpoint into how society could change in just the short span of 13 years. While she grew up in a world of VR combat, Burton experienced a form of real world combat that was augmented with cybernetics, drones, and other tactics that are still a form of science fiction — or is it science eventuality? — today. That difference means that while he respects her abilities, “Burton, by nature of his time spent in the military, tries to take the initiative a lot,” according to Reynor. “[But] Flynne kind of says to him, that’s not always the best course of action.”

It proves to be a sibling relationship augmented by competencies which, to our eyes, are still futuristic. “They’re a pair and they have to trust one another,” Reynor continued. “And throughout the course of the season, you do see their relationship come under pressure and be tested by these circumstances.” 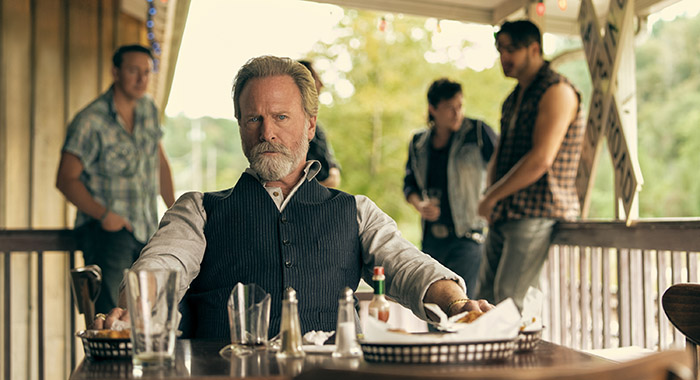 One of those pressures is Corbel Pickett (Louis Herthum), a man of influence in Flynne’s town whose true nature is revealed across the season. But as Joy teased, “For a man like Corbel Pickett, power is the point.”

“It’s not that he’s not likable to, say, his wife. It’s not that he has a worldview that is insane within his way of seeing the world as a game, where power survives. His moves are completely correct,” she said. But as Flynne does not see the world as the same sort of game, his usual approach to things may not be as effective — especially as the Fisher siblings have some surprising resources. But to Joy, their emerging conflict forms “a morality tale of the future” dependent on two questions: “What are the things that we want to fight for and what are the things we want to shape our goals based on?”

And depending on the way the show’s further future state works out, Flynne may come to understand how those questions are answered. But first, she must deal with Lev (JJ Feild) and Dr. Cherise Nuland (T’Nia Miller) — two highly skilled and effective people who already know how her story played out even as they begin to interrupt it. 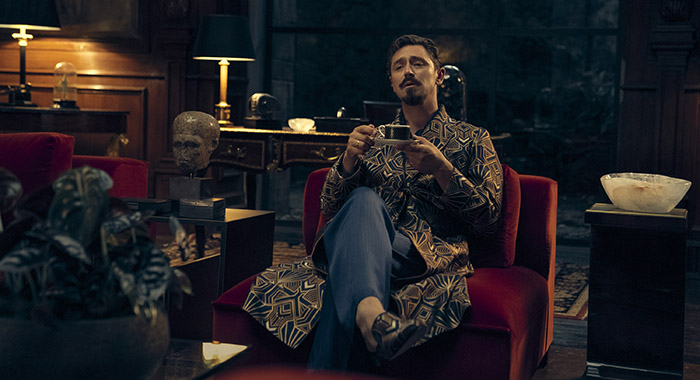 Lev presents his skills by making people comfortable in a “Louis Cyphre” sort of way.

“I want him to be delicious and attractive in terms of, ‘I want to be in a room with the guy,'” Feild explained. In teasing the character, the actor mentioned Lev has a history with Russian oligarchs — “As Gibson wrote, a Russian oligarchy was taking over the world, pretty fricking spot on,” he added — and depends on setting people at ease even if he ends up a potentially devilish character.

Granted, that devil quality remains to be seen.

“He has friends, these beautiful characters like Wilf,” Feild pointed out. “[But] how does a man like that bridge both worlds?” 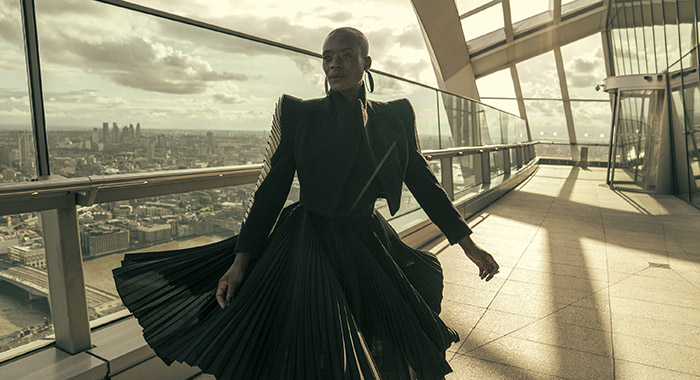 One thing that sets Dr. Nuland apart from Lev, though, may be her recognition of the stakes involved.

“[It] feels like the whole of humanity rests on her shoulders, and she’s working tirelessly day and night,” Miller said. “She has no personal relationships — she has no relationship apart from her work. That is her everything she eats, sleeps, drinks, loves. It’s who she takes to bed at night and who she wakes up with in the morning.”

At the same time, don’t take Nuland’s apparent dedication or Lev’s attempts to put people at ease as evidence of their goals. Much like Flynne, the viewer must navigate a set of what Miller called “head-f— games” to determine who and what they really are. 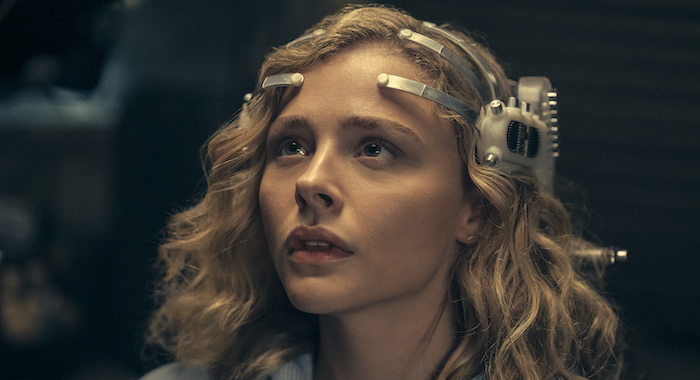 Dealing with those games and the Peripheral, the titular device that allows her to interact with the far-future characters, also puts Flynne in another precarious position.

“I think with her headaches and whatever it is that’s happening in her body throughout the show, I can’t say that from the start of the show to the end that she really does get much sleep,” Moretz said. “I feel like I don’t ever get it either. So, I feel like there’s a lot of similarities between Flynne Fisher and I for sure.”

Nevertheless, Joy maintained that Flynne’s fatigued, but tireless fight for the future is also a positive aspect of the series.

“As long as there are individuals like Flynne and communities and families that are just trying to have each other’s back and survive and live a decent life, there is hope for humanity,” Joy said.