The Conjuring 4 Is Officially on the Way, and More Movie News

This week’s Ketchup brings you more headlines from the world of film development news, covering such titles as The Conjuring 4, Black Samurai, a Maria Callas biopic, Return to Silent Hill, and new DC Comics projects.

THE CONJURING 4 IS OFFICIALLY ON THE WAY 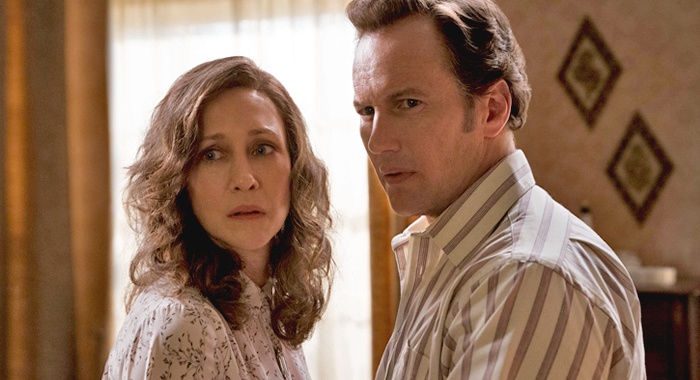 When a little horror movie called The Conjuring (Certified Fresh at 86%) was first released in 2013, few could have predicted that it would lead to one of the the few successful ongoing cinematic universes, with eight films to date (The Nun 2, currently filming in France, will be movie No. 9). Given all of that relative-to-budget success, it’s probably not surprising that New Line Cinema is now developing a sequel currently titled The Conjuring 4. David Leslie Johnson-McGoldrick, who wrote the last two Conjuring films, has been brought on board to write the new film as well, and stars Patrick Wilson and Vera Farmiga, who portray the real-life paranormal investigators Ed and Lorraine Warren, are also expected to return. No director has been announced as of yet, but that is likely to change fairly soon.

1. THE FUTURE OF DC INCLUDES A MAN OF STEEL FOLLOW-UP AND THE FLASH 2

With Black Adam (Rotten at 41%) opening in theaters this week, Warner Bros. made the news a few times because of some of their upcoming post-Black Adam projects. Those plans reportedly include the return of Henry Cavill as Superman in a Man of Steel sequel, or in a movie that would basically be Black Adam vs Superman (or a combination of both, though Dwayne Johnson says he wants more than a “one off” fight between the two). Other plans revealed this week include a secret James Gunn project and shows or films featuring Batman villains like Clayface, the Scarecrow, and Professor Pyg. Warner Bros. is now even committing to a sequel to next year’s The Flash (6/23/2023), with one of the co-writers of Aquaman having already written the first draft of a script, despite the well-publicized problems surrounding the film’s star, Ezra Miller.

Earlier this year, we lost Academy Award-winning actor William Hurt at the age of 71. Among his many credits, Hurt also appeared in five Marvel Cinematic Universe films as General Thaddeus “Thunderbolt” Ross, starting with The Incredible Hulk and ending with last year’s Black Widow. As it turns out, that will not be the final appearance of the character, as Harrison Ford has signed on to take over the role in Captain America: New World Order (5/4/2024), starring Anthony Mackie. There is currently no indication that Ford might also appear in Thunderbolts (7/26/2024), which will adapt a Marvel Comics super team that Ross was a member of at one point when he was the super powered Red Hulk (and there’s also no indication the Red Hulk will ever even show up in the MCU).

Chilean filmmaker Pablo Larraín has enjoyed great success with films based on real people, like Neruda, Jackie, and, just last year, Spencer. If it ain’t broke, why fix it, right? With that in mind, Larraín’s next film will be another mononymous biopic, Maria, centering on the life of famed opera singer Maria Callas. Angelina Jolie will star as Callas in the film, which will reportedly depict the “tumultuous, beautiful and tragic story” of the star “during her final days in 1970s Paris.” Veteran screenwriter Steven Knight, who penned Spencer, will reunite with Larraín to tackle the script for Maria, but we don’t yet know the release date of the film or any of Jolie’s co-stars.

Stuntman-turned-director Chad Stahelski has made a name for himself with the Keanu Reeves hitman franchise John Wick, the fourth installment of which is in post-production and scheduled for release next May. As a result of his success with that series, Stahelski has racked up quite the to-do list of future projects, which includes the Highlander reboot, the video game adaptation Ghost of Tsushima, the comic book adaptation Kill or Be Killed, and more. This week, he added yet another film to his docket, as he was announced as the director for Netflix’s adaptation of The Black Samurai novels by Marc Olden. The books center on an “American soldier in Japan who learns the ways of the most powerful martial arts and becomes the Black Samurai, embarking on a mission to stop dangerous forces who threaten everything he holds dear.” The film will be written by Leigh Dana Jackson (Raising Dion, Foundation), but no cast has been announced yet. The books have previously been adapted in the 1977 blaxploitation film Black Samurai, starring Jim Kelly.

One of the movie genres that dominated blockbuster box office results in the late 1990s was the big budget disaster movie (sometimes called “disaster porn”), which included movies like Independence Day, Armageddon, and the 1996 tornado-chaser movie Twister (63% Fresh). Universal Pictures and Stephen Spielberg’s Amblin Entertainment are now partnering on a Twister sequel to be titled Twisters. Two of the original film’s stars, Bill Paxton and Phillip Seymour Hoffman, have since passed, but the producers are hoping that Helen Hunt will be able to return. There is no director attached to Twisters yet, but the short list reportedly includes Dan Trachtenberg (10 Cloverfield Lane, Prey) and the duo of Elizabeth Chai Vasarhelyi and Jimmy Chin, who won the Academy Award for Best Documentary for their 2018 film Free Solo.

Until recently, Paramount Pictures had been planning to release a fourth film in the current Star Trek franchise on December 22nd, 2023. Those plans were apparently scrapped because the attached director, Matt Shakman, left to direct Marvel’s Fantastic Four instead. It’s unclear what Shakman’s Star Trek 4 might have been about, but this week, the screenwriters who worked on the project before Shakman spilled the beans. The gist is that through some cosmic event, Chris Pine’s James T. Kirk would be the same age as his father (Chris Hemsworth), and the two would have an adventure compared to both Indiana Jones and the Last Crusade and 2001: A Space Odyssey.

7. GET READY TO RETURN TO SILENT HILL

Until relatively recently, one thing that most video game movie adaptations had in common was a Rotten Tomatometer score, and while 2006’s Silent Hill (Rotten at 31%) certainly fits that bill, it also developed something of a cult fanbase in the years after its release, leading to a sequel in 2012’s Silent Hill: Revelation. In a recent livestream dedicated to the franchise, the producers announced that there will be a new film titled Return to Silent Hill, to be directed by the first film’s director, Christophe Gans. Return to Silent Hill will reportedly be a psychological horror film that features both new monsters and returning favorites like “Pyramidhead,” and it will take place after the events of the video game Silent Hill 2, completely independent of the previous two feature films.