In our new feature, Nathan Rabin revisits films on the cusp of becoming cult favorites. 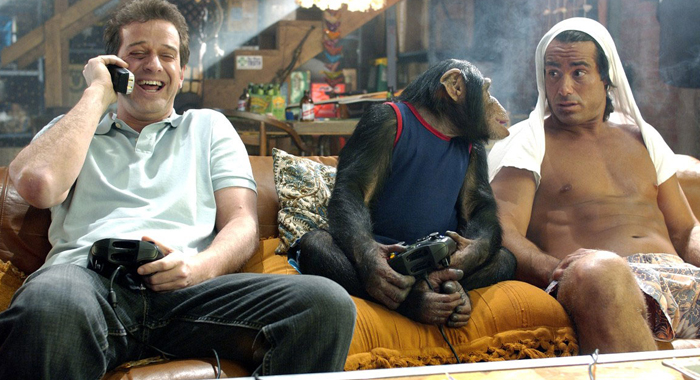 Welcome to the first entry in Sub-Cult, a series devoted to weirdly infectious cinematic oddities on the cusp of becoming the cult films of tomorrow. One of my inspirations for this column is my former colleague Scott Tobias’ wonderful AV Club column New Cult Canon, but this will not be about proposing a new cult canon. Instead, it will be about exploring movies that have caught on in unexpected ways, and have attracted devoted, even obsessive followings despite a widespread consensus that they are terrible.

I will not be writing about Rocky Horror Picture Show, The Room, or Birdemic. Do not expect the usual suspects, or, for that matter, The Usual Suspects, here. I’m calling the column Sub-Cult partially because cult movies are particularly subculture-friendly, while some, like Rocky Horror Picture Show, The Big Lebowski and The Room, have attracted genuine subcultures of their own. It’s also called Sub-Cult because it’s about movies that have tenaciously hung around without rising to the level of clear-cut cult favorites. Lastly, it’s called Sub-Cult because there is a widespread consensus that just about every film I’m writing about here isn’t a cult movie that was misunderstood at the time of its release and went on to become treasured, but rather a movie that is sub-par, sub-standard and just plain not up to snuff.

I want the entries in this column to be on the provocative side. When you write about cult movies, you’re writing about audiences, time, and the way public perception shifts through the decades as much as you’re writing about the movies themselves. Cinematic cults are a glorious tribute to the diversity of human opinion. One man’s “crappy movie that rightly failed because it’s terrible” is another’s “favorite movie ever,” a movie they feel so passionately about that they’re eager to evangelize on its behalf to anyone who will listen, and even people who won’t.

I will be writing extensively here about movies that I myself panned over the course of my nearly 20-year career as a film critic who finds himself inextricably drawn to the dregs of cinema. That includes this column’s inaugural entry: Grandma’s Boy, a 2006 vehicle for Allen Covert, a member of Adam Sandler’s Happy Madison Mafia who owes his career as a producer, writer, and supporting player to staying on the boss’ good side.

Lesser members of the Madison Mafia like Rob Schneider, David Spade, Kevin James, and Nick Swardson at least have well-defined personas to translate to film: Schneider’s a silent-movie slapstick schmuck; Spade is smarmy and condescending, even when playing a hillbilly dumbass; James is a sappy, sad sack oaf; and Swardson’s an effeminate weirdo. But the strange appeal and limitation of Covert as a movie star is that he comes across as just some guy.

Even Sandler fans who have seen Covert in multiple movies might have a hard time picking him out of a lineup or even describing him in useful terms. He’s, I dunno, handsome-ish? Or at least not bad looking, in a forgettable way? As for his comic sensibility, he’s sarcastic, I guess? And kinda immature and goofy, not unlike pretty much every lead character in a lowbrow comedy?

Yet the very features that make Covert a perverse choice to star in a theatrically released movie also make him an oddly relatable everyman. When I originally saw the movie, I quipped that it felt like Covert had won a “Star In Your Own Happy Madison Movie” contest, or that the film was the product of a month Covert spent with some very indulgent counselors and fellow campers at Happy Madison Comedy Movie Fantasy Camp.

I meant it in a pejorative way, but it also captures the film’s curious appeal. With no real persona or blinding charisma to get in the way, it’s easy for fans to project themselves onto either Allen Covert or Alex, the character he plays. On one level, that is not a tantalizing proposition. Alex is no Don Draper alpha male; he’s a 35-year-old video game tester who moves in with his grandma. And Covert was no Orson Welles when he made his starring debut, but a journeyman comedy lifer who had managed to be involved in lots of Sandler projects, dating back to his 1989 debut Going Overboard, without distinguishing himself in any way.

On another level, both Covert and Alex lead enviable existences, at least by the standards of the slackers and stoners attracted to the Happy Madison universe. Covert lucked out by starring in a movie where he gets to hang out with his Happy Madison buddies, pretend to smoke weed and play video games, and make out with Linda Cardellini.

Alex is an even luckier devil. A 35-year-old man who lives with his grandma, he’s got supportive friends always happy to smoke pot and play video games with him (preferably at the same time), a grandmother (Doris Roberts as Lilly) who adores and spoils him, and the slacker/stoner dream job of testing video games, which sounds like a career a dying child would invent as part of the Make-A-Wish program.

Alex’s dream job gets even dreamier when he discovers that his new boss is Samantha (Cardellini), a hip, sexy and fun figure of complete male nerd fantasy tasked with ensuring that a video game designed by former prodigy and current off-putting weirdo J.P. (Joel David Moore) is finished on time. In a rare nod to realism, the mere presence of a woman who looks like Samantha in a characteristically male realm like video games reduces pretty much every man she encounters to a state of drooling, open-mouthed infatuation. Alex is among those instantly love-struck and tries to find the way to his boss’ heart despite his less than ideal living arrangements. There’s also a plot of sorts involving J.P. stealing the game Alex has been developing covertly in his spare time, but it’s better to simply ignore it entirely.

Grandma’s Boy has a wonderfully endearing quality that later Happy Madison productions would fatally lack: it likes its characters and invites audiences to share that affection, instead of treating its characters like the worst kind of human garbage. It’s a much better vehicle for Swardson than Bucky Larson: Born To Be A Star, and while his emotionally stunted virgin falls squarely into Swardson’s well-wrought persona as a Manic Pixie Nightmare Boy, he emerges as a funny, likable character who is even afforded a moment of triumph when he absolutely destroys at a game of Dance Dance Revolution.

The DDR sequence is a standout, a casual masterpiece of intricately choreographed physical comedy, but Swardson isn’t the only member of the Happy Madison B-team whose gifts are uniquely well-suited to the film. Covert makes for an unexpectedly likable and appealing straight man, and perennial supporting player Peter Dante is hilarious as “Dante,” a perma-tanned, weed-dealing space cadet with a weakness for importing dangerous animals from Africa to protect his pot stash.

Even J.P. strikes a strangely sympathetic figure because his defining characteristic isn’t arrogance or a complete inability to understand how human beings function, but rather a desperate loneliness and poignant, innately doomed desire to connect with other people. J.P. communicates partially through a stereotypical “robot” voice that seems to belong to a split personality within him, giving the character a distinct “Dr. Jeckyl and Mr. Robo-Hyde” vibe. He seems to want to live not just in the world of The Matrix but inside the Matrix itself, and decorates his office, computer style, with an endless series of zeros and ones. It’s telling that Grandma’s Boy invites more sympathy for its robot-emulating wannabe-android villain than the vast majority of Happy Madison productions do for their protagonists.

A young Jonah Hill also makes an indelible impression as one of Alex’s co-workers, in no small part because he spends much of his screen time suckling lustily at the breast of a stripper he meets at a wild party. Jonah Hill’s predilection for adult breastfeeding even makes it into Kool Keith’s surprisingly comprehensive theme song “Grandma’s Boyee,” which doesn’t just lay out the entire plot, it pretty much covers every subplot and story beat as well. If I were Hill, having Kool Keith rap about my character’s unusual habit would be as big an honor, if not bigger, than getting nominated for multiple Academy Awards.

Grandma’s Boy is wonderfully inclusive in its comedy; it’s the kind of film where, with the notable exception of J.P., damn near everyone gets laid, damn near everyone smokes weed, everyone plays video games, and everyone has friends who like them, no matter how geeky or socially inept they might be. The relationships here are drawn tenderly and with affection, from Alex’s sweet bond with his loving grandmother to Alex and Jeff’s friendship. Covert’s lack of a persona or star-power ends up working in the film’s favor, giving it a scruffy, underdog charm Happy Madison has lacked since Sandler’s early films. This is a movie about a loser who manages to make his loserish lifestyle work for him, starring the least distinctive and well-known member of Adam Sandler’s crew, and it ends up succeeding as a strange form of nerdy wish-fulfillment.

When it flopped in theaters, the film was at the mercy of two demographics least likely to view it kindly: film critics inclined, both by profession and disposition, to view lowbrow stoner comedies involving kung-fu fighting monkeys and stoned grandmas harshly and without compassion, and audiences asked to pay bloated movie ticket prices to see a frigging Allen Covert vehicle. Meanwhile, the film’s success as a sub-cult film and home video smash (according to the-numbers.com, it has grossed over $30 million on DVD, more than five times its theatrical take) is attributable to the fact that it’s now at the mercy of demographics most inclined to view it kindly: stoners who see it in the low-cost, low-expectation world of home video or on cable, where it seems to be playing on a constant loop.

Grandma’s Boy is what Quentin Tarantino has described as a “hang out movie,” a genial romp filled with quotable lines and fun characters it’s a pleasure to spend time with. After panning the film originally, I came to warm up to it in this new context. As a movie I caught parts of at my buddy Paul’s house, or on cable late at night, I developed a grudging fondness for it that blossomed into outright, genuine appreciation when I re-watched it in its entirety for this column.

Adam Sandler executive produced Grandma’s Boy but does not appear. Sandler can currently be seen onscreen in another video-game movie, the more or less universally reviled Pixels. The strange voyage of Grandma’s Boy from inexplicably theatrically-distributed vehicle for one of the dimmest lights in the Happy Madison galaxy to well-liked fan favorite illustrates that you can never really tell how a film will ultimately be received by audiences. Yet I can say with absolute certainty that nine years from now, I will not be writing an appreciation of Pixels as a misunderstood, under-appreciated sleeper.

I thoroughly enjoyed Grandma’s Boy but I’m not too eager to see Covert in a lead role again. Much of the film’s charm comes from its modest scope, and I quite like Grandma’s Boy as an overachieving one-off rather than the beginning of a career. As Sandler and a public increasingly exhausted with his antics can attest, it’s better to not star in enough movies than to exhaust the public’s tolerance for your shtick by starring in way too many movies.