Today’s Ketchup brings you ten headlines from the world of film development news, covering titles such as Avengers 4, Gladiator 2, The Meg 2, and The Time Machine.

ARE YOU NOT ENTERTAINED? RIDLEY SCOTT MOVES FORWARD WITH GLADIATOR SEQUEL 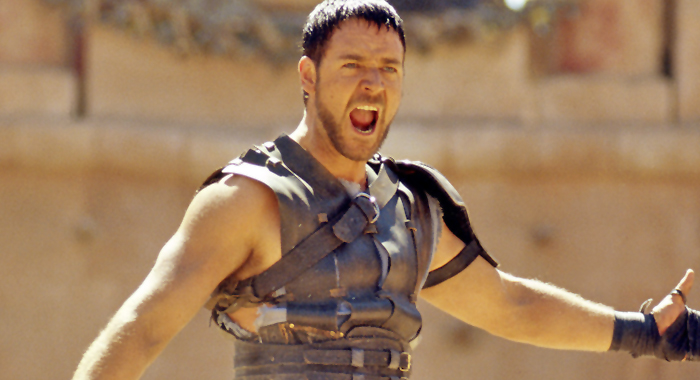 Director Ridley Scott has had so many film projects in development over his career that they have their own Wikipedia page. (Some of those movies, like Alien 5, Blade Runner 2, Dune, I Am Legend, and Tristan & Isolde were eventually directed by other filmmakers.) It’s anyone’s guess as to whether we will ever get The Merlin Saga, Monopoly, or The Prisoner, but one of the longest-running ideas still yet to be realized is a sequel to 2000’s Gladiator (which won five Academy Awards, including Best Picture and Best Actor for Russell Crowe), and Scott is again considering directing a Gladiator sequel. The proposed sequel would tell the decades-later story of Lucius Verus, the son of Lucilla, and the nephew of the emperor Commodus (played in the first film, respectively, by Spencer Treat Clark, Connie Nielsen, and Joaquin Phoenix). DreamWorks no longer has the rights to a Gladiator sequel, so the project is now at Paramount, which, with Ridley Scott’s production company, has hired screenwriter Peter Craig (cowriter of The Hunger Games: Mockingjay Part 1/2, and 2020’s Top Gun: Maverick) to work on the sequel. There doesn’t appear to be much historical evidence of the real Lucius Verus becoming a gladiator, but Gladiator also suggested a detour from history anyway.

Avengers 4 comes out in just six months from this Saturday (May 3, 2019), but there remains so much that we don’t know. Heck, we don’t even know the title yet. Marvel Studios is somehow sustaining that mystery even while they continue their second stage of production. This week, 13 Reasons Why co-star Katherine Langford was cast as “someone” in Avengers 4, with no clues about who that might be. That just means, however, that every fan who’s read actual comics can now speculate who Langford might play, and in today’s world, many of those fans are actual professional writers. One obvious reason for the mystery is that Langford’s character might hint at Marvel Studios’ future plans. A front runner guess (possibly because she has the same first name) is Kate Bishop, AKA Hawkeye, who takes over after (and during) Clint Barton’s era. Other possibilities include Clea (an ally of Doctor Strange), Queen Veranke (of the Skrulls from Captain Marvel), and longtime Avengers member Sersi (of The Eternals, who are someday getting their own movie). Meanwhile, Marvel Studios is developing shows for the upcoming Disney streaming app, which may include a team-up limited series starring Falcon (Anthony Mackie) and Winter Soldier (Sebastian Stan). There has previously been talk about shows for Loki (Tom Hiddleston) and Scarlet Witch (Elizabeth Olsen) that are also “limited series” (probably 6 to 8 episodes), starting in 2019.

2. EWAN MCGREGOR TO DON BLACK MASK AS BAT-VILLAIN IN BIRDS OF PREY

If we start the clock in 1989 with Tim Burton’s first Batman, there have been seven solo Batman movies in the modern era. Although we have obviously had three Jokers, two Two-Faces, and two Catwomans, for the most part the franchise focused on introducing new Bat-villains (the Spider-Man movies also tend to do this). Birds of Prey, featuring Harley Quinn (Margot Robbie), Black Canary (Jurnee Smollett-Bell), Huntress (Mary Elizabeth Winstead), and Detective Renee Montoya (Rosie Perez), is part of DC Comics’ extended “Bat-Family” of titles, so it will also feature a Batman-related villain. This time, it’s Black Mask‘s turn, and he will be played by Ewan McGregor, making his superhero movie debut. The Birds of Prey version of Black Mask is described as “a brutally sadistic kingpin in Gotham City’s criminal underworld who has a fixation with masks.” McGregor and Mary Elizabeth-Winstead previously co-starred together as a romantic couple dabbling in a life in crime in Fargo Season 3. You can read more about Black Mask’s road to the big screen right here. Warner Bros. has scheduled Birds of Prey for release on February 7, 2020, up against Peter Rabbit 2, and the week after the Shining sequel Doctor Sleep, also starring Ewan McGregor.

3. IT DIRECTOR ADAPTING ATTACK ON TITAN AND THE TIME MACHINE

It is entirely expected that directors coming off two hit films like Mama and IT will be wanted for high profile films, but Andy Muschietti actually had that happen twice this week. First, on Monday, we learned that Muschietti had signed with Warner Bros. to direct their live action adaptation of the popular manga series Attack on Titan (which has also been adapted as an anime). Attack on Titan is set in a bizarre future in which mankind is beset by gigantic creatures called Titans who resemble humans (without their skin, so their muscles are exposed — it’s kind of gross). Warner Bros is also the studio behind next year’s Godzilla: King of the Monsters (5/31/2019) and Godzilla vs Kong (5/22/2020), so it makes total sense they’d also be interested in Attack on Titan. The second new project for Andy Muschietti this week is also at Warner Bros., with Leonardo DiCaprio’s Appian Way also on board. They have recruited Muschietti to start development on a new adaptation of H.G. Wells’ science fiction classic The Time Machine. The two most popular previous adaptations were released in 1960 (Fresh at 77%) and in 2002 (Rotten at 29%). It’s not yet known whether DiCaprio is considering starring in The Time Machine. Andy Muschietti wrapped filming of IT: Chapter Two this week for release next year on September 6, 2019.

4. SACHA BARON COHEN, EDDIE REDMAYNE, AND THE TRIAL OF THE CHICAGO 7

Up above, we mentioned director Ridley Scott has been attached to a lot of movies, but he’s got nothing on Steven Spielberg. Spielberg is now deeply in preproduction on his remake of West Side Story, and on Indiana Jones 5, but up until a few years ago, one of his projects was The Trial of the Chicago 7, depicting the true stories of the protestors at the 1968 Democratic National Convention. Spielberg is still producing The Trial of the Chicago 7, but it will now be directed by its screenwriter, Aaron Sorkin (Molly’s Game). Sacha Baron Cohen (who nearly starred as Freddie Mercury in this week’s Bohemian Rhapsody) is also in early talks to play one of the protest’s leaders, Abbie Hoffman (of the “Yippies”). That news would have been a lot for one week, but Eddie Redmayne is also now in talks to play Tom Hayden, one of the student leaders (and future husband of Jane Fonda).

5. MICHAEL KEATON TO PLAY ANTI-VIRUS ICON JOHN MCAFEE IN KING OF THE JUNGLE

Many corporate leaders and innovators lead pretty boring lives, but then there’s John McAfee, who lent his surname to the popular line of McAfee antivirus software.  John McAfee is back in the United States now, but for several years, he was on the run in Central America after accusations in 2012 that he had been involved in a murder in Belize. This incredible true story will soon become a movie called King of the Jungle, and we now know who will be the film’s two male stars. Michael Keaton will play McAfee, and Seth Rogen will pay a journalist who finds himself drawn into “McAfee’s escalating paranoia, slippery reality, and murder.” King of the Jungle will be directed by Glenn Ficarra and John Requa (the co-directors of Crazy Stupid Love) from a screenplay by the writing team of Scott Alexander and Larry Karaszewski (Ed Wood, Man on the Moon). Michael Keaton comes to King of the Jungle after the departure of the film’s first announced star, Johnny Depp.

Since making his directorial debut in 2003 with the political comedy Head of State, comedian Chris Rock has also directed 2007’s I Think I Love My Wife and 2014’s Top Five. Rock also starred in all three of those films, but for his fourth film as director, he has instead recruited Kevin Hart as his lead. Kevin Hart will star in Co-Parenting, a family comedy from screenwriter Yamara Taylor (TV’s black-ish), playing “a stay at home dad who raises the kids while his star CEO wife serves as the breadwinner… [until he] finds himself in emotional and public turmoil when his wife kicks him to the curb, and they engage in a bitter divorce and custody battle.” So, perhaps it’s not all comedy (the tone is being compared to some of the films of Judd Apatow and James L. Brooks).

Every once in a while, we interpret a news story as a “Fresh Development” because it involves a turnaround for something that would otherwise be “Rotten.” For example, Tyler Perry may have had a great box office run with his Madea character, but no movie with Madea in the title has ever scored above a 37% on the Tomatometer (that was 2011’s Madea’s Big Happy Family). So, when Tyler Perry announced this week that 2019 would be the end of the Madea character with Tyler Perry’s A Madea Family Funeral (3/1/2019), we see it as a “Fresh Development” for actual moviegoers. The 10 movies in Tyler Perry’s Madea franchise have earned over $500 million to date.

Back in June, following the (relatively) disappointing box office numbers for Solo: A Star Wars Story, the world started hearing talk that Lucasfilm might be reconsidering its collective plans for “Star Wars Story” spinoffs. At that point, there had been discussions about spinoffs for such characters as Obi-Wan Kenobi, Yoda, and the bounty hunter Boba Fett (and indeed, that might’ve been next up). Well, this week, we received confirmation that the project that might’ve been called Boba Fett: A Star Wars Story is no longer being developed, with the focus instead going to Jon Favreau’s series The Mandalorian for Disney’s upcoming streaming service. (Boba Fett wears Mandalorian battle armor.) As for what the Boba Fett spinoff would have included, we also learned this week that several of Boba Fett’s fellow bounty hunters would have been featured in the movie, potentially including characters such as IG-88, Bossk, Dengar, 4-Lom, and Zuckus. As this piece points out, however, fans have been fascinated by Boba Fett for 40 years now, so we may yet see Boba Fett return in some form yet, somewhere, someday.

1. THE MEG SEQUEL STILL IN DEVELOPMENT

This summer saw the release of the giant shark movie The Meg after the project had been kicked around Hollywood for about 20 years of development. The Meg received a Rotten Tomatometer score of just 46%, but it was still a box office success, earning $142 million domestically and over $527 million globally. One of the changes that was made to the film through the course of its development was a focus on Asian settings, characters, and financing, which was surely part of why the film did so well in many overseas markets. That’s probably also why a sequel to The Meg is now in development, as its executive producer Catherine Xujin Ying revealed this week. It’s not yet known if Jason Statham or any other co-stars will return for the sequel. In addition to a sequel and a potential film franchise, The Meg may also soon inspire giant-shark theme parks around the world. There’s no word yet as to when The Meg 2 might take its giant bite out of the box office (or not).