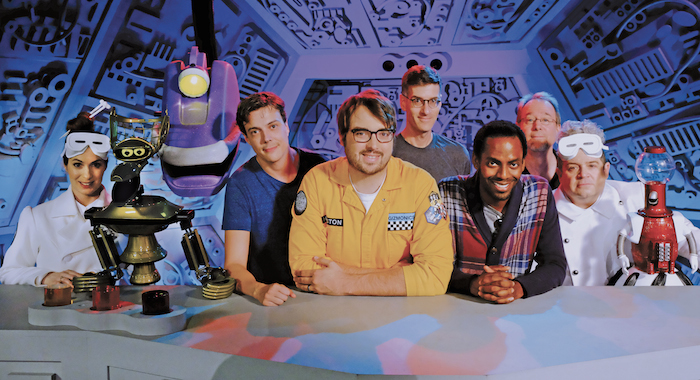 Before there were YouTube reaction videos, before there were podcasts about bad movies, before there was live tweeting, there was Mystery Science Theater 3000, a fictionalized world in which mad scientists capture a janitor and force him to watch B movies in a dubious world-domination plot. The unlikely astronaut builds three robot companions, and the foursome endure the torment of terrible movies with humor, cracking wise (and corny) over particularly foul film-making.

Hodgson, Ray, and Day spoke with Rotten Tomatoes before the premiere of MST3K on Netflix. Here are five things to know about the season that are new to the revival, and five classic elements that haven’t changed.

1. NEW: THERE’S A NEW FORRESTER, HER NEW ASSISTANT, AND A NEW HOST 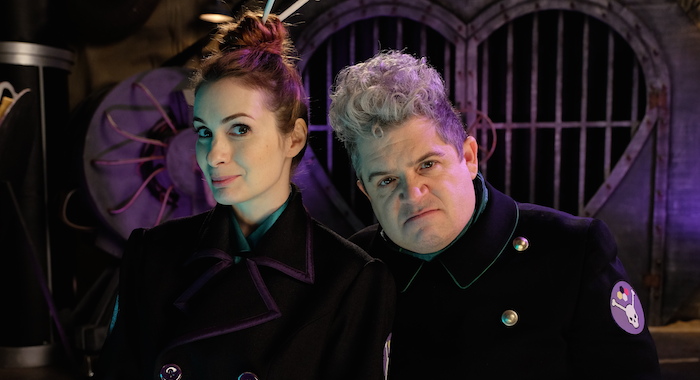 In the world of MST3K, forcing brave astronauts to watch bad movies was originally the brainchild of Dr. Clayton Forrester (Trace Beaulieu), with his henchman TV’s Frank (Frank Conniff). Now Forrester’s daughter Kinga (Day) has taken over the family legacy.

“She’s definitely, I think, trying to prove herself in a sense to her dad and live up to the family name,” Day said. “I think she has a lot of insecurities and those are expressed in her trying to be the most important, richest, and most powerful person in the universe, ruling over all media.”

Oswalt plays TV’s Son of TV’s Frank. Jonah Ray plays Jonah Heston, the third astronaut captured by the Forresters after Hodgson himself and Mike Nelson. Ray knows it’ll be hard for the fans because he gave Nelson a hard time too.

“When Mike took over, I was upset just because I was a nerd and I didn’t like change,” Ray said. “Now I can’t complain about the new host. It puts me in kind of an awkward position as a fan.”

2. SAME: THE MOVIES ARE STILL OBSCURE 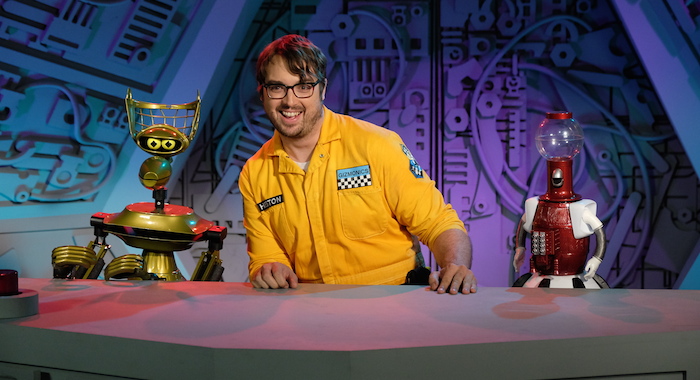 The most famous movies tackled by MST3K may have been a few Godzillas and Diabolik, but Hodgson learned that the more obscure movies, like Mitchell or I Accuse My Parents, work best for riffing.

“My impression is MST works the opposite of Hollywood,” Hodgson said. “Basically the less you know about a movie, the better. That’s why we don’t try to promote what the movies are. It’s better if it’s a surprise.” 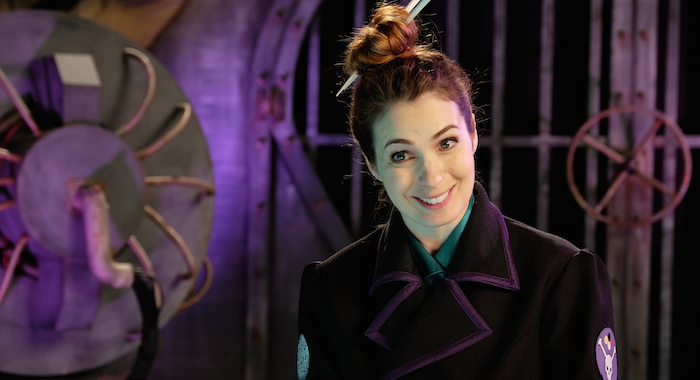 Hodgson said a lot of the new writers grew up as fans of the original series. That includes Ray, who is also a writer, and Day, who wrote on four episodes.

“I personally tried to shove as many gaming jokes as possible in the episodes,” Day said. “We’ll see if those made it in.”

Ray learned that sometimes you have to throw out your preconceived notions of what to say and just go with your gut.

“Just the idea of listening to the people that you’re with while watching them, listening to what they have,” Ray said. “Trusting your instincts and your first impulses. That joke that just pops out of your brain or mouth when you’re watching something, it might not be perfect, but there might be something to it.”

4. SAME: THE PROCESS IS A WELL-OILED MACHINE 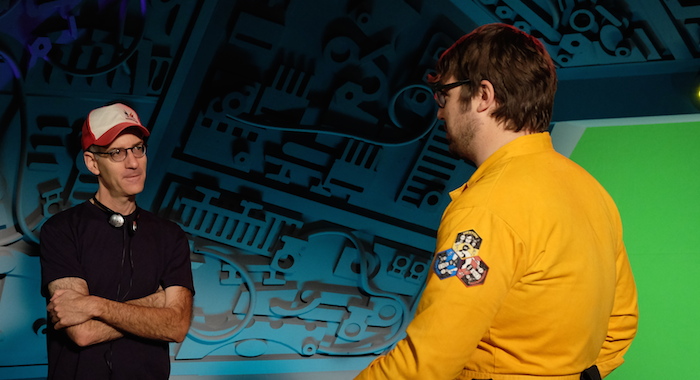 If it ain’t broke, don’t fix it. First, the writers take the movie home and write jokes to submit to Hodgson. Then they watch it over and over with the writers to figure out 90-minutes worth of jokes.

“You can’t talk over the whole movie,” Ray said. “That was a big learning curve of learning how to squeeze riffs in the gaps in the movie.”

They also can’t let too much of the movie go by without saying something.

“All of us think we can sit in front of our TVs and make smartass comments to the screen, but when you really have to do it for the whole movie, you can’t skip any parts where you don’t have something,” Day said. “You really have to dig into your brain and be like, ‘What clever reference can I come up with here?’”

They also start with an abundance of riffs and cut it down.

“That comes in the rehearsal process,” Hodgson said. “It just gets too tight. We definitely overwrite it and then trim stuff back.”

5. NEW: THE RIFFS ARE FASTER 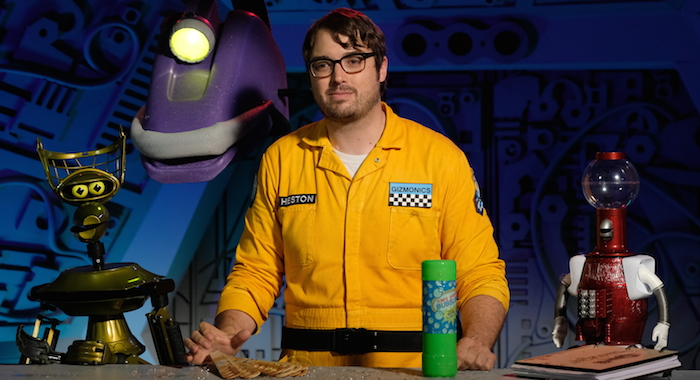 The new MST3K has more jokes per minute than ever before. You may even hear three jokes in as little as 10 seconds. Day feels streaming services have trained people to process jokes faster.

“I think that really reflects digital,” she said. “When you’re watching by yourself or on a smaller screen, the more jokes per minute the better.”

Ray feels there are so many jokes you can watch the episodes more than once. “For me, every time there’s a lot of jokes, it just makes me want to watch it again,” Ray said.

6. SAME: THEY STILL WARN THE MOVIES’ STARS ABOUT SNAKES 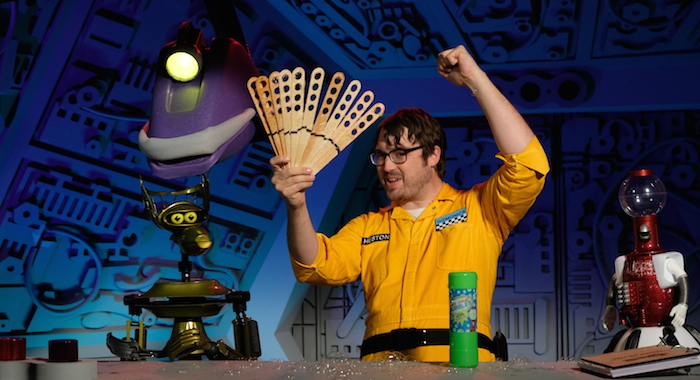 The new MST3K continues all the running jokes that fans loved to quote.

“If someone’s giving exposition and there’s a shot of someone just listening, you can always just [say], ‘Uh, uh-huh, oh yeah,’” Ray said. “Of course if anyone’s walking in a field, you just have to yell out, ‘Watch out for snakes.’ Sometimes it’s just so perfect to throw in a ‘Hi-keeba!’ when you can.”

When Jonah and the robots take a break from the movies, inventions and music are back too. Hodgson used to present the “Invention Exchange” at the beginning of each show, and it’s back by popular request.

“I didn’t have too strong an opinion about them,” Hodgson said. “People around me really liked them, so I decided to put them in.”

The hosts and bots would always perform original songs, and Ray has musical experience. He’s played in bands and in some of his stand-up.

“I’ve done bits that involve music a bit, but I was never really like a guitar comic or anything like that,” Ray said. “I would just make fun funny songs and perform them live here and there in sketches and stuff like that.” 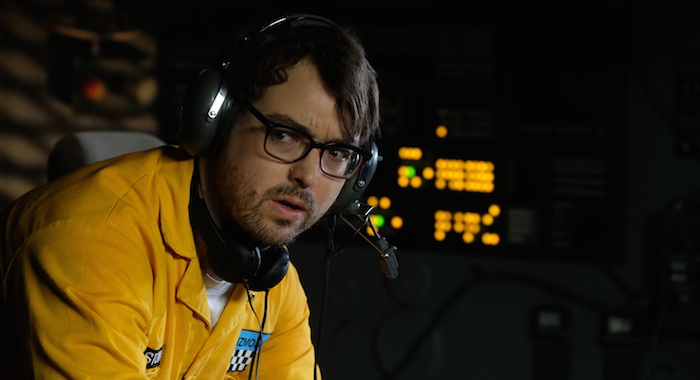 “That gives you a level of intimacy, but you don’t want it to sound too intimate,” Hodgson said. “Jonah and the bots are not sitting next to you. They’re sitting about three or four feet in front of you. You have to dial that in with the microphones.” 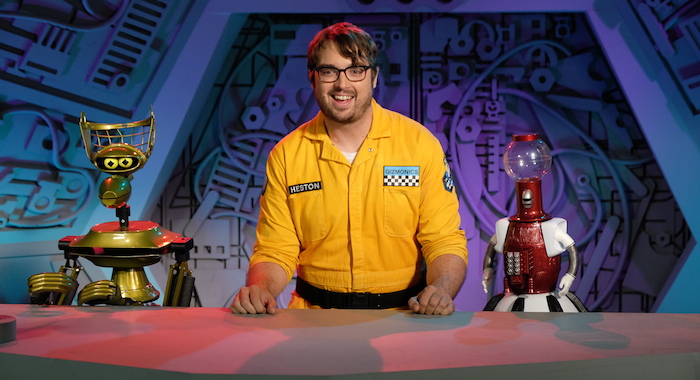 MST3K used to have to adhere to broadcast standards. Now that it’s on Netflix, they could technically say whatever they want. However, Hodgson still wants families to be able to watch it together.

“I think what we look for is what we would call discreet adult humor,” Hodgson said. “We don’t use trigger words that would make a kid go, ‘What does that mean?’ and it would mean a parent would have to stop the video and explain an adult concept to a kid. Parents don’t mind talking about adult things with kids, but they may not want to do that watching a comedy show.”

9. NEW: NOW YOU CAN BINGE, BUT YOU SHOULDN’T 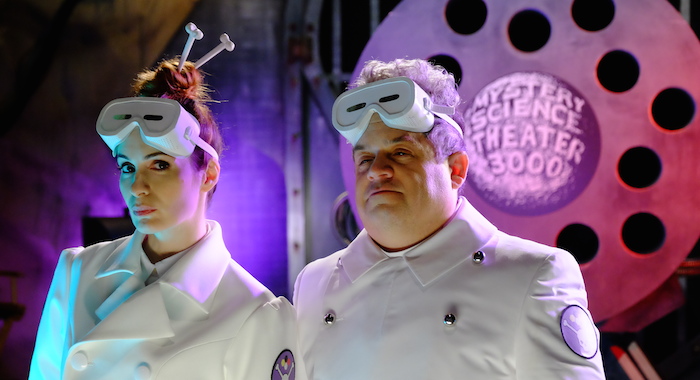 Thanks to Netflix, you’ll have access to all 14 episodes right away. The cast does not recommend binging.

“It’s a lot to take in at once,” Ray said. “People would end up feeling the same fatigue that our characters would. The Forrester legacy might actually come true if everyone tries to watch these all in a row.”

Day does encourage people to watch them out of order. “To have all of them go up at the same time, people can look at all the new movies and be like, ‘Oh, which ones do I want to watch first?’” Day said. “I have a preference for the old historical ones just as a viewer.”

Hodgson just hopes people take their time. “It took us so long to make them, I wouldn’t insist that people watch them right away,” Hodgson said. “Personally, I just want them to enjoy them at their own pace. It’s a lot.”

10. SAME: THERE ARE STILL “COMMERCIAL” BREAKS 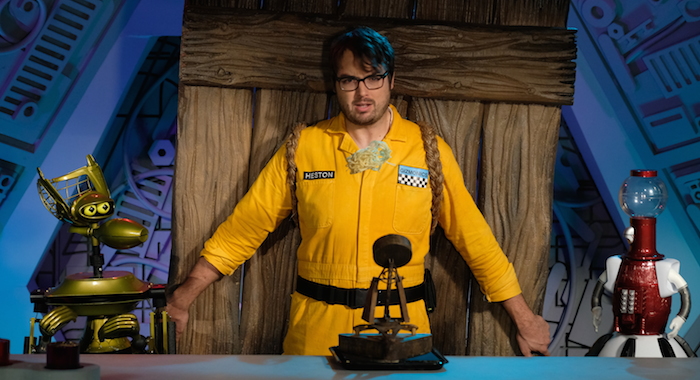 There are no commercials on Netflix, but Hodgson still created interstitial “We’ll be right back” screens as if they were pausing for commercials.

“It’s a 90-minute show,” Hodgson said. “So if people say, ‘Man, I’m not going to watch 90 minutes. I’ll just watch up until the first interstitial, or the second.’ Also, in the context of the show, Kinga’s trying to blow up the brand. She uses those breaks to hype the show, reiterate what you’re watching, tell people about the things of interest in the show.”