While many mysteries remain after Moon Knight’s fourth episode, the journey of Steven Grant (Oscar Isaac), Marc Spector (also Isaac), and Layla El-Faouly (May Calamawy) proves to be something we hardly expected from the Marvel Cinematic Universe: a tomb-raiding adventure more akin to The Mummy or Indiana Jones than Iron Man or Thor. And that’s just the beginning as the episode also generates the opportunity for the most unlikely pair of people to meet. But what could it all mean for our trio of archaeologically-inclined adventurers and their cliffhanger status? Let’s take a look at the fourth episode and see if we can’t excavate some answers.

Or, at the very least, follow the scientific method (where applicable) and come up with a hypothesis or three.

The Murder of Abdallah El-Faouly

The best place to start is, perhaps, with the murder of Layla’s father, Abdallah, as it presents a whole new set of variables to consider. For one, Arthur Harrow (Ethan Hawke, pictured above) invoking his name seemingly disproves the notion we presented last week that Layla’s name might be a cover to obscure her own tomb raiding. Although, that still makes one wonder why she would need a phony passport to return to Egypt…

Beyond its impact on our own guesses, the scene in which Layla confronts Marc about the night her father died introduces new details about their relationship, Marc’s past, and a possible reason for Steven to exist.

Let’s start with what Marc tells us about the night of the murder. His partner “got greedy” and killed everyone at Abdallah’s dig site. Marc attempted to save Abdallah, but ended up shot by his partner. This is fairly consistent with Moon Knight’s origin back in the comics, in which he allowed Marlene’s father, also an archeologist, to be killed by his employer — a merc with warlord ambitions named Bushman — and ended up bleeding out before a statue of Khonshu. But considering how often Marc has lied or omitted details to Layla, his account may not be truthful. The truth is more Steven’s thing.

But one thing that does come clear, as Layla herself suggests, is that Marc sought her out as some sort of atonement. Their relationship began because he wanted to apologize for his part in Abdallah’s murder, but (as seems typical for this version of Marc) he could never say the words and married her instead. Not exactly the sort of meet-cute you’d hope for, but it is also another echo of Marlene from the comics. She not only witnessed the death of her father, but saw Marc’s first transformation into Moon Knight. And thinking about it now, it may explain why she preferred to call Marc “Steven” despite knowing about his other identities.

Layla also has a solid connection with the Steven of the television series. Although, one has to wonder how much of Steven’s bookish charm was employed when Marc first met her. But a better question to ask at this point is when did Steven emerge? Presuming he’s not the primary, he could have begun as a persona more attuned to Layla’s needs. Although, her constant comments about how different he is from Marc suggests he may not have appeared until after Marc decided to leave her.

Back in the comics, Steven was the first alter to appear, and considering how much a life he seems to have in London, we’re inclined to think he’s been around for a very long time. And until the show gives more specific details of Marc’s past as a mercenary or Steven’s life before his DID changed everything, our guesses need to suffice.

Raiders of the Lost Tomb

Choosing Alexander the Great to be Ammit’s last avatar is a masterstroke on the part of the writing team. A Macedonian with aims to rule the world certainly seems like someone who would be sympathetic to Ammit’s ideas. And it is easy to see how — in the MCU at least — her powers aided his goals. It also continues the interesting theme seen with the Ennead last week in their willingness to choose avatars from outside of Egypt. Although, as Steven noted, Alexander had a claim in the region and managed to establish a pharaonic dynasty in his wake.

But the absence of Alexander’s tomb in the real world means it could appear here as anything the production needed it to be within the MCU. The choice they went with is something far more like Indiana Jones or The Mummy movies than we ever would have expected. With an apparent maze to confuse Harrow and his team, the crypt also came equipped with two Heka priests who would not be out of place fighting with Brendan Fraser. Besides offering camp value and a certain amount of horror-type thrill when one of the priests attacks Layla, they also more strongly introduce the notion of the supernatural into Moon Knight and the MCU.

To be clear, that thread is already present with Ammit’s jackals and the Ennead itself. But the presence of out-and-out undead mummy guards, especially without a more specific explanation, feels like another step into an unexplainable supernatural beyond the science-as-magic of Asgard or the attempt to explain the Mystic Arts as co-existing with the science of the physical world in Doctor Strange.

It leaves us wondering how Marvel will explain the difference between the apparent supernatural powers of the Ennead and the well-established fact that the Asgardians are an alien species with a physical existence out in the cosmos. The mention of the Overvoid, a realm outside conventional reality, is one way to set them apart. But with word of Gorr the God Butcher (Christian Bale) setting out to destroy all the pantheons in Thor: Love and Thunder, we expect an answer sooner rather than later.

Living in the Psychic World

Although readers of Moon Knight comics across the last 10 years or so may have suspected the eventual appearance of a psychiatric ward, it still came as a surprise to see realized in this exact way — via Harrow literally shooting Marc in the chest and a transition to a cheesily-produced Indiana Jones knock-off. Presented in the 4:3 aspect ratio no less!

But then Marc finds himself tied to a wheelchair in a stark-white hospital. Crawley (Shaun Scott) is there as a bingo announcer and even Steven’s old boss, Donna (Lucy Thackery), is present as a patient. The imagery is familiar — it is a genre TV tradition to position the hero as someone who has been committed for at least one episode – but it also has a specific context to Moon Knight as an imaginary psych ward was the first battlefield between Marc and Ammit back in the comics.

In that instance, Ammit presented herself as Dr. Emmet with two faithful orderlies named Bobbi and Billy (also seen in the series in the form of actors Ann Akinjirin and David Ganly). The intention was to break Marc, Steven, and several other alters down so the remaining personality would be more willing to accept Khonshu’s plans. A secondary objective was to also break the bonds with Marlene, Crawley, and Gena, a third Moon Knight associate. The scheme backfired, of course, resulting in a greater understanding between Marc, Steven, and Jake Lockley, the third persona we still expect to see on Moon Knight before the season’s end. In fact, plenty of people on Twitter believe he already made an appearance in the second sarcophagus Marc spotted in the ward.

And much like the ward in that comic book story, the one in this episode offers a unique and dynamic way for Marc and Steven to share the same space. Consider just how at odds they were throughout the episode until the moment they had a chance to hug one another. We’d be willing to guess that was the real purpose for the sanitarium delusion in lieu of a further ploy by Harrow or Ammit.

We’re also going to guess Taweret (Antonia Salib), the anthropomorphized hippopotamus glimpsed in the final moments, intercepted Marc and Steven’s consciousnesses and set up the ward from Marc’s own memories so he and Steven could confront some of their issues. According to Egyptian mythology, Taweret is a fertility goddess who, along with a number of other household goddesses resembling hippopotami, offers protection. She is also said to be a calming force and, boy, does Marc need some calm at the moment.

Also of note is the suggestion that Taweret and those other hippos may be aspects of one singular goddess — something which could make her sympathetic to Moon Knight’s condition. If she is here to provide Marc and Steven (and maybe Jake) a chance to clear the air and present a united front against Harrow and Ammit, it would be a profound development in the way the Egyptian gods have been seen in the show so far. Their apathy even in the face of Ammit’s escape is still puzzling.

But it also leads to a question: Why would she help the Fist of Khonshu? It may have to do more with Ammit, as both goddesses are depicted with hippopotamus traits. Also, as Taweret played a role in funeral customs, it is also possible she is preparing Marc and Steven for the Duat. Honestly, we’d love to see the pair complete the path of the dead just to see how they defend their actions when their hearts are weighed. At the same time, though, we need them back in the material world next week even if we know Layla can get away (with the ushabti of Ammit) all by herself. 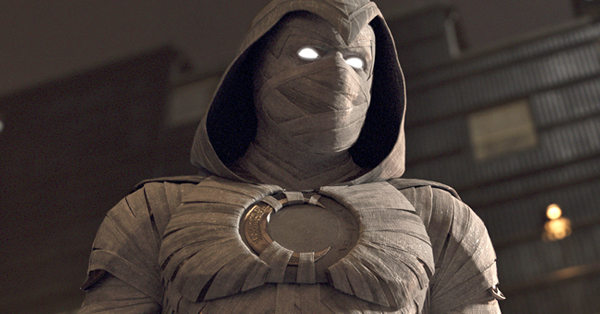