When Marvel’s Iron Fist returns in September, it will have a new focus, a new foe and a new creative direction, incoming showrunner Raven Metzer told Rotten Tomaotes. Metzer said there’s one key reason the second season will be markedly different from the first when we caught up with him and the show’s cast during Comic-Con.

“If you think about the first seasons of [Netflix’s] Marvel shows, it was all leading up to [Defenders], and a lot of the story was about pushing these people into that place,” he said of the ambitious plan to put four television series on the streaming service and have their lead characters unite in a fifth.

“Now that it’s over, we don’t have anything that we’re pushing to besides [ourselves],” he continued. While he still finds the shared resources of the Marvel universe exciting and the potential for other team-up series a unique facet of the Netflix universe, Iron Fist’s second season is “an Iron Fist story, it’s not a piece of the Marvel puzzle leading somewhere.”

That freedom does not mean the show is suddenly in its own little reality, though. Luke Cage co-star Simone Missick stops by to continue the friendship between her Misty Knight and Colleen Wing (Jessica Henwick) established in The Defenders and the second season of Luke Cage.

While police matters actually bring her downtown, Missick said the pair’s possible team-up as the Daughters of the Dragon continues to be honored — if not set up — as Iron Fist progresses.

“I don’t think the fans are going to get to see them in the way that they hope, that peak, but I think it is a nice change,” she said. 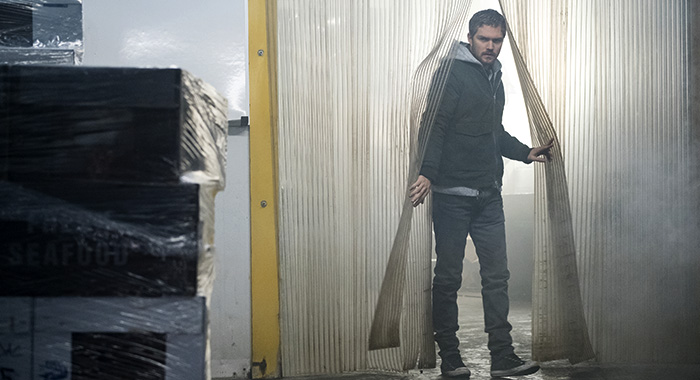 Meanwhile, the second season also sees Iron Fist Danny Rand (Finn Jones) in a more mature headspace even as he continues to defend the city in honor of the fallen Matt Murdoch (Charlie Cox of The Defenders and Daredevil).

“He’s now protecting downtown New York [and] he’s taken that very seriously,” Jones said. “He’s also moved in with his girlfriend, Colleen, so he’s coming of age, and he’s trying to balance all those things.”

Though the stakes still feature superhero implications, Finn felt the situation was quite relatable.

“He’s more sure of himself,” he continued. “He’s got this sh– down. He’s enjoying himself — maybe a little bit too much — but yeah he’s in a good place. It’s really interesting to see Danny grow in that way.” 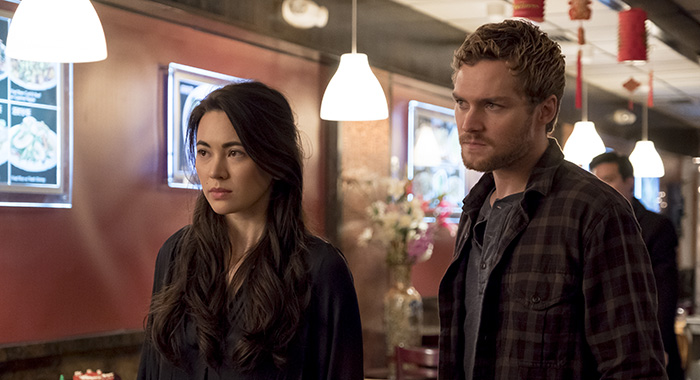 But for Colleen, rejoining the fight is not necessarily her first instinct. To Henwick, the character’s great fear is becoming defined by her weapon.

She added that it may be down to her friendship with Misty to put the situation into perspective by “calling her out on her sh– and being like ‘OK, who do you want to be, what do you want?'”

And though the characters are at cross-purposes somewhat as the season begins, Metzer felt it was important to show their relationship has become stronger over the course of their journey together.

“It was a really important moment to see that, yes, they’re heroes and they’re vigilantes and these two strong, powerful characters who fight and do all these things,” he explained. “But they’re also two people who go to dinner and have fun together and impress each other in all the right ways and have a nice relationship.” 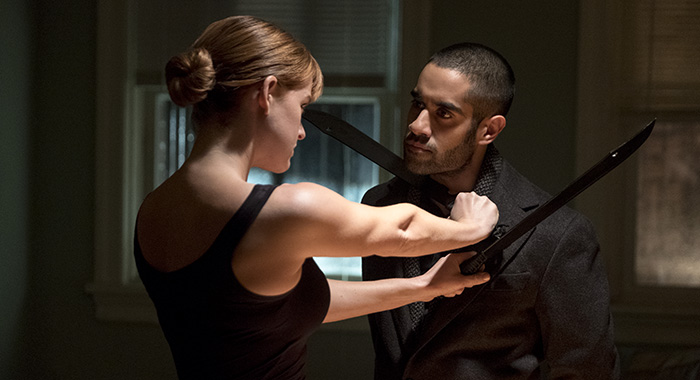 Nevertheless, threats still present themselves. As revealed at the Iron Fist panel at Comic-Con, Alice Eve assumes the role of Typhoid Mary, the legendary Marvel Comics foe of Daredevil. And though her comic book origins span from Hell’s Kitchen to the upper echelon of mutantdom, Metzer said her origin on the show, though streamlined, will honor her Marvel roots.

“It’s a very complex, detailed back story,” Eve teased. When viewers meet her, though, they will see only one facet of her personality. “She starts as a very sweet character and that’s who meets Danny. She’s almost virginal.”

But Mary suffers from Dissociative Identity Disorder and cannot help but invent personalities to protect that vulnerable person we first meet earlier in the season. To keep that person safe, Mary imagines how a father would protect the vulnerable side of herself and  “the daughter [who] is wronged in a real way that pushes her to even further extremes,” Eve said.

“It’s a very complex relationship with yourself,” she continued. And though D.I.D. is a serious mental condition, she recognized its more benign form in her own interactions with people. “I have different behavior around different people. My family: I’m very, very comfortable around and it brings out a different side of me. We all walk around — to quote T.S. Eliot — with ‘the faces that you meet.’”

Metzer added, “This is such a challenging role for an actor to play because it’s not just one role, you know, and she really embraced that.”

To Eve, having these “other dimensions” makes Marvel’s collection of female characters all the more interesting. 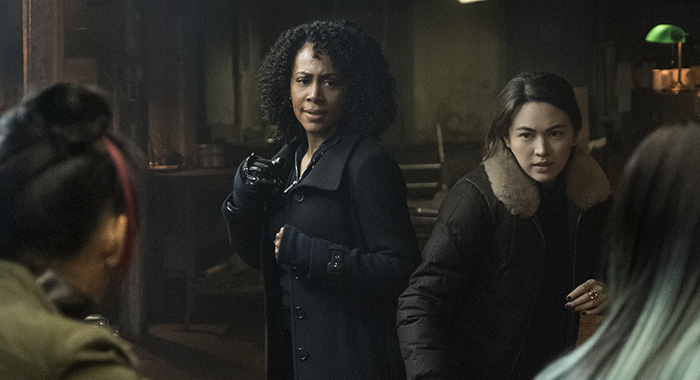 “I think within all women lies multiple ‘faces’ of personality,” Missick said. “I think a lot of times with different shows you just see the trope: the wife, the girlfriend, the secretary, the best friend, the sexpot. What you get to see in Typhoid Mary’s character is her sexuality, her violence, her vulnerability.

“You see all of that within Misty and Colleen, but in different iterations of those faces. And you see other ones: they need to have fun or need to protect the community. Those are things you often don’t see in women across 13 episodes or 10 episodes [of other television shows],” Missick continued. “So I think that it’s a great thing to have that and then to have the ability to fight and protect yourself physically. I think that’s what makes the women of Marvel dynamic to watch.”

Metzer said it was important to strike a  50/50 balance in the writer’s room between men and women.

“We talk a lot about making sure that, especially in this season, that these conversations are said,” he explained. “The women on staff are talking about their own lives. It’s more that the girlfriend, the wife — they have their own story.”

And fighting is a key element in the second season with Metzer giving it special attention. During the Comic-Con panel, he and the cast showed a number of clips from the season’s fights, which include Danny facing off against his old friend Davos (Sacha Dhawan), Colleen and Misty fighting Mary’s more violent persona, Colleen taking on some young street toughs, and Danny fighting an armored truck.

“I started training four months ahead of the shoot date,” he said, “So really it was like 9 or 10 months work on this character and [getting] physically into it.”

“There were times when we’d meet up on the weekends to rehearse fight scenes well,” he continued. “We were really into it. Every single one of us here was in the dojo. We helped each other and it was really hard work.”

The group agreed that it was some of the toughest stunt work yet.

“It was so impressive to watch everyone sort of come at this season with intensity and energy and also a real togetherness,” Metzer said.

But for all the effort put into the fights in the coming season, Jones said the heart of the show is the growing dynamics between the characters.

“Seeing the characters flow into another stage of their growth is really interesting,” he said.