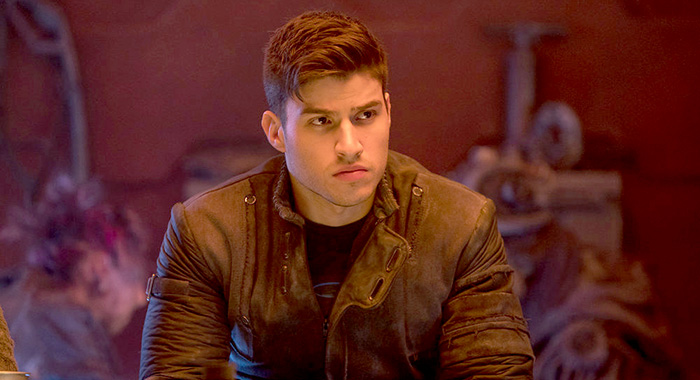 Throughout its second season, Krypton has proven to be one of the most surprising shows based on comic book concepts to make it to the screen. Using the pulpy backstory of Superman’s home planet, it embraced those concepts for tales of cloning, interstellar armies, and time-traveling ne’er-do-wells. And into that setting, it introduced a complex cast of character anchored by Cameron Cuffe as Seg-El, a man desperate to save his planet from would-be despots and somewhat interested in ensuring the existence of his grandson Kal-El.

Ahead of the second season finale, Cuffe was kind enough to chat with Rotten Tomatoes about some of the year’s highlights and tease a little bit of what might be around the corner for the citizens of Kandor.

One of the great applications of DC Comics lore this year was the use of the Black Mercy, a parasitic alien plant devised by Alan Moore and Dave Gibbons in “For The Man Who Has Everything,” a story published in Superman Annual #2 that Cuffe considers “one of the most brilliant Superman stories of all time.” The creature attaches itself to a host, feeding off of it while providing it with an idealized fantasy world. In the story, the villainous Mongul uses the Black Mercy against Superman – leaving him in a reality where he lived a simpler life on his homeworld. On Krypton, Dru-Zod (Colin Salmon) used it against his own mother Lyta (Georgina Campbell) in an attempt to keep her from interfering with his plans of conquest.

“It is such a perfect test of the hero and, truly, the hero has to reject happiness to answer the call to action,” Cuffe said of the creature as a storytelling device. Like Superman, Lyta found herself in an idealized city of Kryptonopolis – a lush paradise far from the dark stone and crystal of Kandor. But beyond the beauty of another city-state, the fantasy revealed Lyta’s fondest wish to escape the Zod sense of duty.  “It’s such a brilliant way to explore the inner workings of the mind,” added Cuffe. “And the way it’s used I think is absolutely perfect.”

Of course, it remains to be seen if the real Kryptonopolis is as beautiful as the one Lyta envisioned.

A Possible Mercy for Kem

From his first appearance in the pilot, Seg’s friend Kem (Rasmus Hardiker) had a target on his forehead. The proprietor of a bar in the Rankless district of Kandor, it seemed as though the Sagitari would eventually haul him away for one reason of another. Then he became concerned about Ona (Tipper Seifert-Cleveland) — a child he promised to take care of, but let become an attendant of the Voice of Rao (Blake Ritson), the religious authority who would soon find himself consumed by Brainiac (also Ritson). After the computer tyrant used her devotion to get at Seg and Kem, he left to recover in Kryptonopolis. By the end of the first year, he was signing up for Dru-Zod’s military and when we found him again in the second season, he was stationed on Krypton’s moon Wegthor and tasked with apprehending his former friends.

But since this is Kem, he was soon part of the Resistance.

He managed to survive so much that we forgot about the target, but it re-emerged once Doomsday arrived on Wegthor. At least it was a heroic end. According to Cuffe, a story like Kem’s is Krypton in a microcosm. “It’s not about having the powers or the costume. It’s about doing the right thing,” he said. “Kem, who in so many ways is the everyman, says [to Seg], ‘You know what? It’s my time to step up so I’m going to do it.’”

The actor said saying goodbye to Hardiker and Kem was the toughest day of the season. “Everyone on set attest to fact that I was crying like a baby in the rehearsal takes,” he said. “We love Ras … It was really, really emotional and it was a wonderful day. And a really sad one.”

And though Kem’s sacrifice destroyed Wegthor, Cuffe was not ready to rule out some last second reprieve. “There’s a saying in comic books: ‘no one stays dead forever.’ So this is a show that involves time travel and cloning. And you never know. I doubt we’ve seen the last of Rasmus Hardiker on Krypton.”

The First Appearance of Jor-El

The second season saw the first reference to Superman’s father Jor-El, but as it turns out, his first appearance was in the pilot episode under a different name: Cor-Vex. The baby – the genetically engineered offspring of Seg and Nyssa-Vex (Wallis Day) – was a key element of Nyssa’s story throughout the season. But upon re-uniting with Seg and the baby, an important choice was made to let the House of Vex die and rename the baby Jor-El, the name of Seg’s great-grandfather. At least, according to the hologram of Seg’s grandfather Val-El (Ian McElhinney).

According to Cuffe, he never imagined the infant mentioned in the pilot would turn out to be a famous member of the House of El.

“That was such a shock because obviously that was a huge milestone that was coming. You know, the birth of Jor-El was always going to be a milestone in the story that we were telling,” he explained. “But the fact that it turned out to be Cor-Vex and that Nyssa-Vex turned out to be Superman’s grandmother, that was a huge twist. And, in fact, when I read that in the script, I was talking to [showrunner] Cameron Welsh, I was like, ‘This is a huge moment.’

“This is really moving towards — you know, if you think about Watchmen and the Doomsday Clock,” he added, “that’s the clock ticking closer towards midnight — so that’s a very exciting thing for us.”

Of course, midnight in this context is the destruction of Krypton, but at least the naming scene gave Seg, Nyssa, and even the hologram of Val a moment of peace and happiness.

“It was such a joy to play,” Cuffe continued. “And I think, for me as a fan, to be a part of the legacy has always been special, but to hold the baby Jor-El and to know what that moment is both in terms of the world of our show, but in the larger story of Superman, that was a really special moment for me.”

And as a sort of punctuation on the scene, Cuffe finally put on a shirt emblazoned with the S-shield, the symbol of the House of El.

“Since I got cast in the role, one of the first thoughts that occurred to that there’s a very small group of actors out there who’ve worn that symbol,” he said. “And to be a part of that, to actually wear that symbol, to be someone who gets to carry that symbol forward is immensely important to me both as a person and as an actor.”

But nothing as special as the moment could last long, and soon the baby Jor-El was snatched from his parents by Brainiac, who declared the blood of House El the real strength of Krypton.

“Heroes don’t take days off,” Cuffe said, and should Seg manage to defeat Zod, he will have only a few moments rest before searching for his son.

The Journey of Jayna

Beyond the sci-fi trappings, war stories, and political intrigues, Krypton has some pretty strong shipping going on with fans hoping the triangle between Seg, Lyta, and Nyssa will be resolved soon. But Cuffe noted the growing relationship between Jayna-Zod (Ann Ogbomo) and Dev-Em (Aaron Pierre) was “one of the most wonderful and exciting” developments of the season.

“They were both people who’ve been part of something that was a cycle of violence, and these are both people who bear the scars of that,” he said. “And so to see them open up to each other was wonderful from a character perspective and from an audience perspective. These are two people who are trying to build up their lives again, who are in many ways, like the story of the [Kryptonian] Flamebird, are being reborn.”

To Cuffe, Jayna’s journey from Primus of the Sagitari to a seasoned resistance fighter against her own grandson has been a joy to watch and play off against in their scenes together.

“Even though they started off on opposite sides, there’s always been that begrudging respect between the two of them,” he said. “Now that they’re standing side by side, that’s going to be as a formidable team.”

Beyond whatever actions the Resistance may take in the season finale, Cuffe has a strong sense of where the series may go in season 3. The current series has, in fact, been teasing its direction all year with Dru-Zod’s fleet: other worlds.

“Season 1 was very, very focused. It was almost entirely in Kandor. Season 2 expands the world and the story even farther. And season 3, I think we want to go even bigger again,” Cuffe said.

He hopes those new environments will allow Seg – who will have to venture into space if he hopes to rescue Jor-El – the opportunity to experience the powers of Superman.

“This is purely me theorizing,” he said. “I think there are really incredible things that bond General Zod and Seg to each other. And one of those things is the experience of the Phantom Zone. But what is it going to be like when Seg finally understands what a yellow sun does to Kryptonian physiology?”

Cuffe suggested the experience may actually bring Seg closer to his miscreant son — that is, should Seg find himself on a planet orbiting a yellow sun, of course.

“It’s such a wonderful relationship in the sense that if there is one person that Seg could choose to save, it will be Zod. And if there’s one person that Zod could choose to convert, it would be Seg,” Cuffe continued. “And there is this — as much as they are against each other and Zod despises Kal-El and everything he stands for and Seg despises the monstrous thing that Zod has done in the name of his regime — there’s also this respect and maybe even love they have for each other.”

He noted, however, that there is the possibility for things to go amiss for Seg, just as they did for his ancestor who helped to create Doomsday.

“[It’s] alluded to when Seg says to Zod in episode four, ‘The Els and the Zods, our capacity to create is only rivaled by our ability to destroy.’ These people are immensely capable and are doing things with the best intentions; however, sometimes when you do things with your best intentions, it can still go horribly wrong.”

But considering Superman no longer exists in Krypton’s future, how much worse can things get? Hopefully, a third season will see Seg taking control of his destiny and restoring his grandson’s in the process.