When Gotham debuted in 2014, many were skeptical about a Batman show without Batman. Those already disinclined to enjoy it saw little appeal in its early episodes, which combined Burton-esque visuals and Batman Begins‘ color palette into a Law & Order-style police procedural. But the show weathered that storm — and its first year — to become a dependable slice of comic book television. With the series taking its final bow tonight, and introducing the Batman to its world at long last, we thought we’d take a look back at how the series found its footing and five of things it did right in the process.

It Found A Remarkable Cast 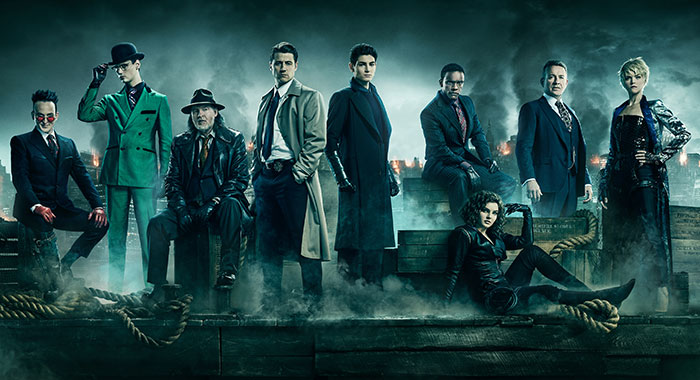 Even in its roughest days, the series could boast Robin Lord Taylor, Cory Michael Smith, and a host of other actors as reasons to keep watching. Taylor, in particular, made the series’ conception of Oswald Cobblepot as a pathetic “umbrella boy” into something more than a stereotypical comic book villain. Through the years, Oswald evolved into a power player with a strange and wonderful love for his city. But Taylor always kept a little bit of the beaten-down Oswald around, allowing the scripts to make him both a menace and a joke — sometimes within the same scene.

Even its choices for guest characters proved the show could be a magnet for great talent. Alexander Siddig and B.D. Wong proved to be great additions as Ra’s Al Ghul and Hugo Strange. That’s not to mention Crystal Reed as the scheming Sofia Falcone, Jessica Lucas’ long-term stay as Tabitha Galavan, and Anthony Carrigan’s take on Victor Zsasz: a darkly comic and compelling interpretation of the often-one note Batman serial killer.

Oh, and we’d be remiss if we didn’t mention Jada Pinkett Smith’s contributions to the show as Fish Mooney or Drew Powell as Butch Gilzean, a man who bounced from mob boss to mob boss before becoming a compelling take on DC Comics’s Solomon Grundy.

But all of those criminals and villains were able to soar thanks to the show’s backbone: a cast of heroes led by Ben McKenzie. Without the (mostly) upright Jim Gordon, Gotham would’ve floundered as it tried to find itself. And from the moment he was announced, Donal Logue as Harvey Bullock proved to be the casting choice even the most skeptical fan could point to and say “they got that one right.” Sean Pertwee’s Alfred soon proved to be one of the most compassionate versions of the butler ever filmed, David Mazouz carved out a place for the young Bruce Wayne, and it is hard to think of Camren Bicondova’s Selina Kyle as anything less than a heroic presence — even if the character tried to break out of that perception.

Without the core ensemble and the choicest of guest performers, the show could never have pulled off its pivot from Batman-themed procedural to the Gotham its viewers came to love. 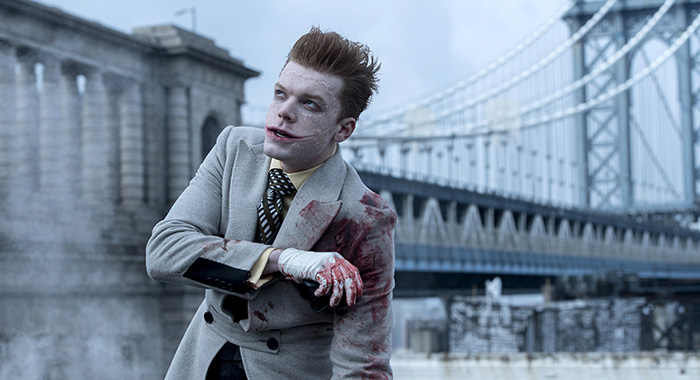 It became clear toward the middle of the first season that the show was most comfortable embracing the mania of its Batman characters. Oswald’s shouting, Fish Mooney going big to balance out the contained John Doman as Carmine Falcone, and even that early idea about the Red Hood infecting its wearer with a homicidal megalomania suggested where the series would go in its subsequent years. By season 3, Gotham gleefully embraced its wilder impulses.

Ed’s (Smith) battle with his Riddler persona accelerated. Oswald relished his newfound leadership role in the city’s underworld, and characters like Theo Galavan (James Frain) debuted. The plots rose to match the archness of the characters. Arkham became a key location as the Order of St. Dumas, The Court of Owls, and the League of Shadows all made their plays for the city. And in each storyline, characters would reach for the rafters and do things other shows — even superhero shows — could never pull off for fear of the camp edge.

Let’s consider Butch’s evolution as an example: Solomon Grundy is one of those characters you just don’t expect to see in live action. Arrow flirted with the character in its early days by featuring a version of Cyrus Gold — Grundy’s human name — but soon left it behind for a greater focus on Deathstroke (Manu Bennett). But Gotham delivered the often put-upon and generally loyal Butch into a place where his transformation makes sense. The runoff from Indian Hill serves as well as the mystical energies in Gotham’s Slaughter Swamp. In doing so, it gave Butch an in-world justification for a quasi-zombie resurrection. It led to some pretty arch things, like Tabitha pummeling the sense back into Butch. But it also continued the unexpected thread between the two of them and fueled more of the show’s operatic energy when Oswald finally put him down.

Then there’s the Valeskas. Though the series toyed with our expectations in regards to Jerome’s (Cameron Monaghan) destiny from carny to killer, he proved to be a delightfully unhinged prototype Joker. The arrival of his brother Jeremiah (also Monaghan) only reinforced the need for characters and performances as large and sometimes silly as the ones employed on Gotham. Once the producers knew this was the right note, it all felt consistent. 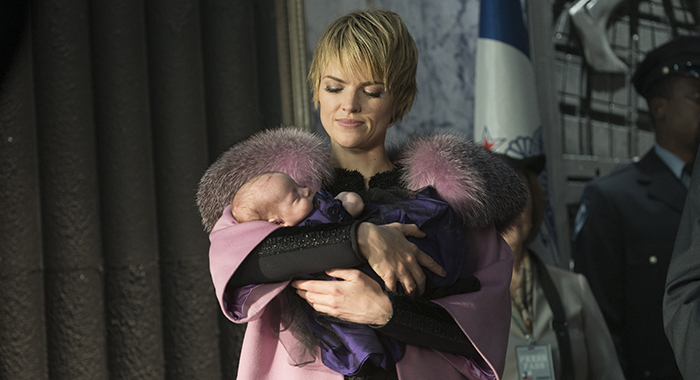 If you only had the first handful of episodes of Gotham to go on, you’d expect Barbara Kean (Erin Richards) to be the first character cut from the show — yeah, even sooner than Rene Montoya (Victoria Cartagena) and Crispus Allen (Andrew Stewart Jones). But the series performed a magic trick with the character, breathing a wild, wonderful life into her.

Introduced as Jim’s buttoned-down, high society love interest, Barbara diverged from Jim’s world diverged soon after he proposed to her. After Jason Skolimiski (Milo Ventimiglia), a serial killer known as the Ogre, brainwashed her into killing her own parents, a long-buried madness awoke in Barbara. That change to the character would sustain her for the next four seasons.

She re-emerged in the second season as an unhinged x-factor, a potential proto-Harley Quinn in Theo Galavan’s Maniax (a quasi-Suicide Squad). She eventually found a stronger ally in Theo’s sister Tabitha (even though she killed Barbara that one time) and Selina. Ra’s Al Ghul resurrected her and chose her as his successor for a time, but it all went badly. That misadventure still ended with Barbara killing the Demon and ordering the deaths of every male League member. She became a territorial leader during No Man’s Land and still managed to fulfill a role given to her from comic book lore: becoming Batgirl’s mother.

Through it all, the character brought a certain camp energy to the show, making her a delight to watch. Ra’s Al Ghul may have been correct in his assessment — no one in Gotham City likes her — but we loved her. We loved her enough, in fact, that we always wanted to see her get her comeuppance, but also sighed with relief every time she stayed the hand of death itself.

It Made Leslie Thompkins A Marquee Character 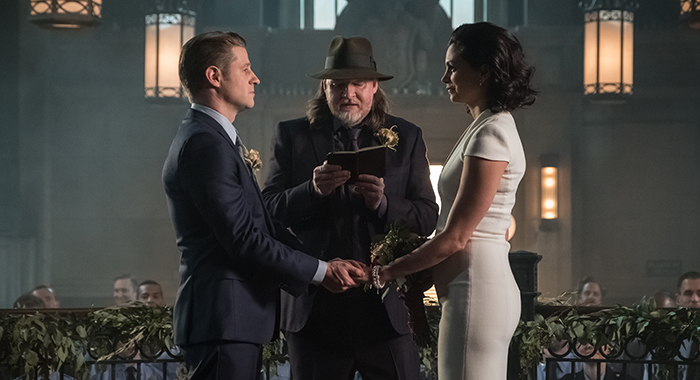 First debuting in 1976’s Detective Comics #457, Dr. Leslie Thompkins was introduced as a family friend who comforted young Bruce on the night his parents were murdered and as a defender of the less-fortunate kids living near Crime Alley. Across the decades, she would become one of Batman’s confidants, but almost always a special guest character. She might matter for a storyline — like the time she faked Stephanie Brown’s death to prove a point to Batman — but she generally drifted back to Crime Alley (or Africa), out of sight and out of mind from the reader.

But Leslie proved to be a character ripe for the Gotham treatment. First appearing as a guest character (played by Morena Baccarin) halfway through the first season, the almost immediate flirtation with Jim Gordon — and their ability to work well on cases together — proved too irresistible for the producers to ignore. She was a regular character from the second season onward, even when sensibility or death itself would suggest it was time to leave Gotham. And where Barbara’s path through town was a straight line, Lee’s (as the series would dub her) path proved to be a rubber band.

At first as caring and altruistic as her comic book counterpart’s initial appearances, an arrogant streak emerged when she married into the Falcone crime family. Things only got worse when Jim killed her husband, Mario, in self-defense. But in infecting herself with the Alice Tetch Virus, she learned a truth that led her out of Gotham a second time (she first left after Jim was sentenced to life in prison and she miscarried their child). She soon returned to run a clinic in the Narrows (more shades of her comic book counterpart), where she eventually became its benevolent leader and started a relationships with Ed. It led to their deaths, but they both got better thanks to Nyssa Al Ghul (Jaime Murray) and her plans for the No Man’s Land Gotham. In the end, she married Jim.

The series took the handful of ideas about Leslie Thompkins spread across 30 years of comics and made them a fantastic, soapy saga of one woman denying her heart. Sure, a lot of people had to die before she would accept Jim’s marriage proposal, but this is Gotham after all, where crime lords get to have happy endings.

It is also the sort of show in which Lee could wheel an in-labor Barbara down a disused hospital corridor while Barbara shoots a bunch of goons in the face, leading to the two characters finally bonding after almost five full years of tension.

It Tested The Nobility of Jim Gordon 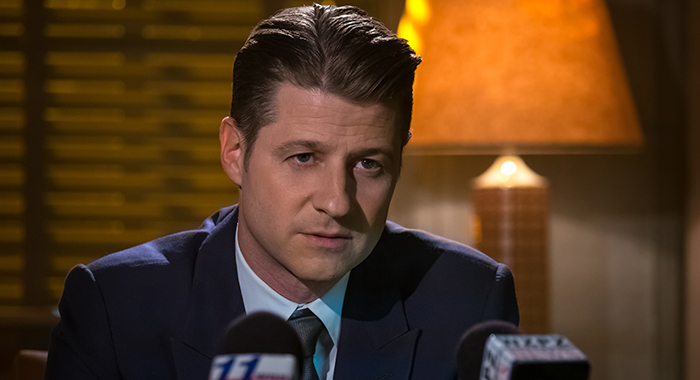 In designing a Batman show without Batman, Gotham looked to Jim Gordon to fill the hero role. And on television, heroes get their convictions tested on the regular. Where Batman can out-muscle and out-think any threat to his worldview, Jim can only take those punches and weather those storms.

And boy, did Gotham test him. From a green detective on a police force rife with corruption to commission of a city in need of some serious rebuilding, the show kept finding new ways to sweep Jim’s legs, shoot him in the shoulder, and encase him in darkness, like that time Lee buried him to make him take the Tetch Virus.

But through it all, Jim always found his way back to his moral center. Sure, he made bad deals with people like Sofia Falcone and Oswald, but those decisions would prove to Jim that he could never take the convenient path. Consider just how few concession he gave during No Man’s Land: Even with resources dwindling and rival warlords chomping at the Green Zone, Jim managed to stay true to his ideals. He also managed not to kill Ed when he was revealed as the person who blew up Haven. Would Jim have had that strength without all the previous experiences, kidnappings, back-door deals, and Oswald’s attempts to be his friend? It may not have all gone smoothly, but Jim managed to save the city from tearing itself apart without the Batman.

In fact, he proved you can do a Batman show without Batman. Despite the Dark Knight being the hero Gotham deserves, Jim proved one mostly good cop can hold the line as well. It makes sense. He was the first supporting character creators Bill Finger and Bob Kane introduced into Batman’s world and has had the same 80 years to develop. But Gotham allowed him to take a journey as harrowing and as dark as any his future friend would embark upon, and he is now a richer character for it.

Nonetheless, as the series finale airs tonight, let’s see what the Batman can do in his single Gotham appearance.