The style, the humor, and that sweet, sweet music are some of the things that make this admittedly flawed adaptation work as well as it does.

Plenty of people have had time to digest Netflix’s live action adaptation of Cowboy Bebop and the almost even split on the Tomatometer reflects exactly how it’s been digested. Some warmly received it while others quibble about pacing, production design in the back half, and the changes to Spike Spiegel’s (John Cho) story. That’s to be expected, of course. No adaptation creates a 1:1 experience – especially a live-action show emulating a beloved anime series – right down to Spike’s costume. Nevertheless, the show distinguishes itself by being surprisingly faithful. Of course, with counterparts like Dragonball Evolution and even Netflix’s own Death Note film, that’s still a fairly low bar to vault over. With that in mind, let’s take a look and five of things Cowboy Bebop got right and just two of the things it mishandled.

What It Gets Right

1. The Title Theme (And The Music Overall)

In so many updates, reboots, and reinventions, the title theme is often jettisoned in favor of a quick title card or a new theme lacking the power of the original series (sorry, Voltron: Legendary Defender, you know it’s true). Bebop avoids any criticism in this regard by just straight up using the original theme composed by Yoko Kanno and performed by her band, Seatbelts. It’s a great piece of music that perfectly encapsulates the mood and feel of the series. Therefore, there really was no way to do this right without including it in every episode.

But the success of that theme means we do have qualms about how it was implemented in some of the episodes – starting before the title sequence in Session #3, “Dog Star Swing,” for example – or the subsequent use of a remix in an attempt to shake things up. These changes are not necessary, as few things prime the viewer for the Cowboy Bebop experience like the original title theme.

Indeed, Kanno’s music helps maintain that mood throughout, whether using the original score from the anime or new material. Also, we appreciate the appearance of the original end credits song, “The Real Folk Blues,” in a handful of episodes. 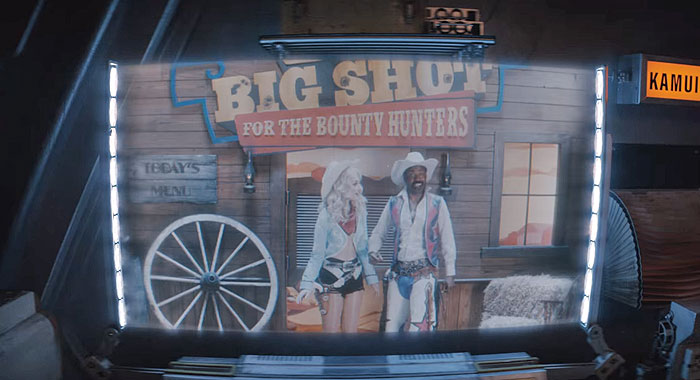 Although we only get to see Big Shot two or three times, the goofy spirit of its anime counterpart is alive and well in the live-action version. Sure, Judy’s (Lucy Currey) costume is a little less revealing and Punch’s (Ira Munn) accent is toned way down to conform to a more modern sensibility, but that strange mixture of game show, sports score update, and news program still works with real, live actors taking the place of animation.

In fact, it would have been nice to see the program once or twice more as the season progressed, but after it anchored Spike and Faye’s (Daniella Pineda) argument about which bounty to take in Session #5, “Darkside Tango,” it may have worn out its welcome if either they or Jet sat down for another long update. That said, we fully expect to see Big Shot again in the second season. It is a fun way to dump a lot of exposition on the viewer while parodying reality TV, after all.

3. The Style Of Bebop’s Future 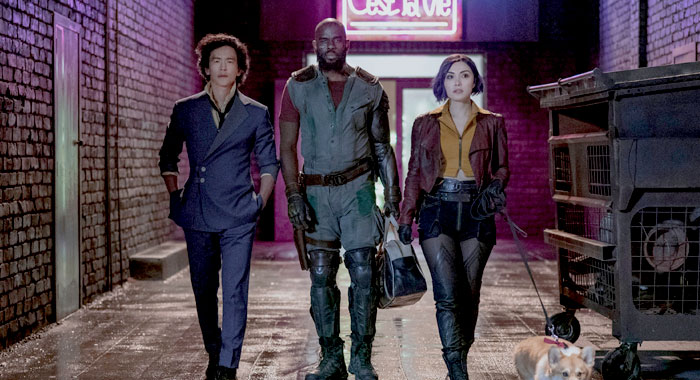 Admittedly, the unreality of Cowboy Bebop’s production design doesn’t always work, but in its best moments, it creates a convincing vision of a run-down future that just about excuses the occasional shortfall in the program’s own budget.

One great example is the VR environment Spike enters in Session #6, “Binary Two-Step.” The façade of the city outside Dr. Londes’s facility makes perfect sense within the narrative: the world is so obviously fake that Spike should be able to recognize what’s going on. Of course, it is the same street in the “real” world, which hides its seams via quick cuts as Spike first walks in – but as long as you forgive that slight stretch, the unreality of the VR street (augmented by that posterization effect in Spike’s subsequent runthroughs) really proves just how heightened the sets can be. The same can be said for some of the other locations across the ten episodes; the slightly unreal quality creates a heightened universe for the characters to inhabit.

Conversely, the lovingly rendered shots of space travel prove to be a great contrast. Although still maintaining the heightened reality of the sets, they definitely skew closer to a more general cinematic reality which lends weight to the Bebop, the astral gates, and the traffic within them.

Also, it should be said, the run-down quality of the solar system, its settlements, and gear is one of the great holdovers from the anime, augmented ever so slightly by live-action’s love affair with muted colors. 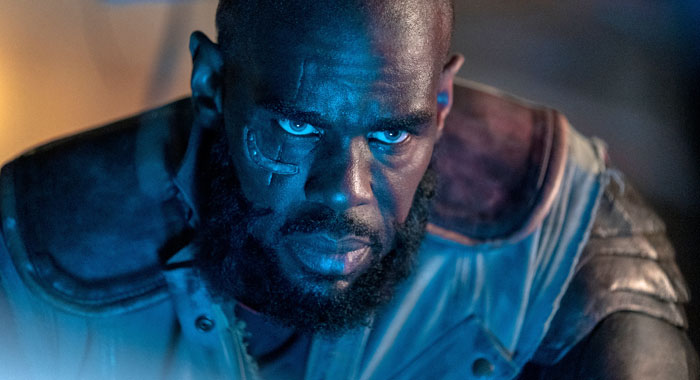 Whether or not the changes to Jet Black’s story appeal to you, you have to admit Mustafa Shakir still creates a pretty faithful and likable live-action version of the anime character voiced by Unsho Ishizuka in Japan and Beau Billingslea in the States. He’s gruff but warm, dedicated to the job but also ready to push that aside to be a dad – either to his biological daughter or his surrogate children aboard the ship. And though he may not revel in cooking as he did in the anime, you still get the sense he’d fry up some peppers for Spike and Faye should the moment call for it.

Also, we have to admit, the added warmth Shakir gives Jet makes it far easier to accept Faye as a long-term guest aboard the Bebop. If he thinks she’s cool, then she must be cool, right?

One quibble though: the fact Jet cannot see his partner on the force was crooked just about breaks the show’s heightened reality. Yes, it is true to the anime, but something about Shakir’s Jet makes it seem unlikely that he would miss it – both in the moment and years later. Wade Williams’s take on Fad is practically Orson Welles’s corrupt cop in Touch of Evil! How could he miss it? 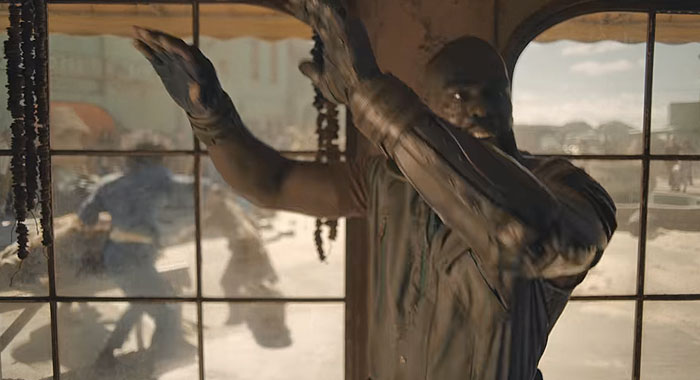 Many fans of the anime preferred the noir elements and ennui permeating the program – which also becomes a more prevalent tone as it enters its endgame – but its lighter moments often proved to be as fondly recalled. The live-action version updates some of the humor featured in the anime while also building on the dynamics of its characters.

Besides the copious amounts of banter between Spike, Jet, and Faye, we want to highlight the moment in Session #7, “Galileo Hustle,” when Jet sits down to watch his daughter’s recital via hologram. The scene from the school perspective is straight-up family drama: Jet’s trying his best even as everyone is getting used to Chalmers (Geoff Stults) in the father role. For his part, Chalmers is also trying to keep Jet involved because he knows the guy wasn’t dirty. Meanwhile, back where Jet is actually sitting, Spike is busy fighting the goons of Iron Mink (Tyson Ritter). As the recital begins, Jet gets more into it and imitates his daughter’s dance moves – which is funny enough in the context of the school setting, but it gets funnier when the scene cuts back to a wide shot with Spike still engaged in a fight just behind Jet.

Although there’s no moment exactly like this in the anime, it’s very much in the spirit of the situational and visual humor – think the dogs chasing after the lab van in “Stray Dog Strut.” And as in the anime, not every joke lands, but the success-to-failure ratio for laughs is pretty solid.

What It Gets Wrong 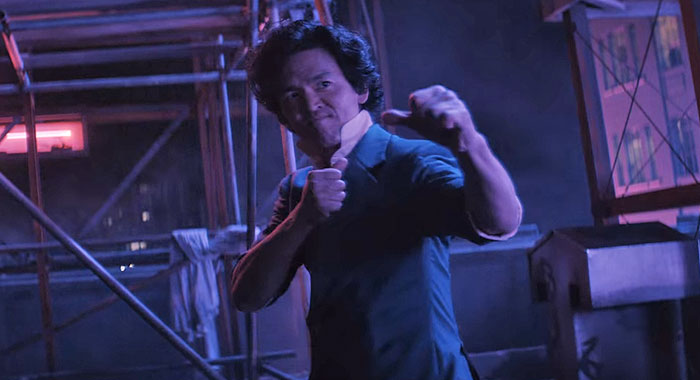 Spike’s ability as a hand-to-hand fighter is one of the early features of the anime that convinces you to continue watching. It’s balletic, impactful, and just plain cool. The live-action series simply fails to capture this aspect of the character.

Granted, it’s nigh impossible to ask an actor like Cho and his stunt team to recreate such moves. Really, they’re emblematic of the sorts of things you can do with animation. Spike, for example, is a bunch of noodles poured into a suit. His silhouette is, ultimately, unreal. Merge that with unbroken shots of him dancing around foes and making strikes and you get truly great animation.

Back in the real world, though, attempting such foot work would require way more time than the production had – and that’s before you factor in the injury Cho suffered, which put the show on hiatus for nearly a year while he recuperated. And even if a stunt performer could train up to animated Spike’s skills, the need to cut to closer shots of Cho would break the rhythm. Although, the actor recently told James Corden that a CGI “face/off” option to map his visage onto a stunt performer was considered in the early days of his recovery. But we imagine the effect would still miss the artistry the animation team brought to Spike in the anime.

Ultimately, the choice to go with a different style and use tighter editing was the right choice. Attempting a more direct emulation would’ve broken the show’s odd simulacrum charm. 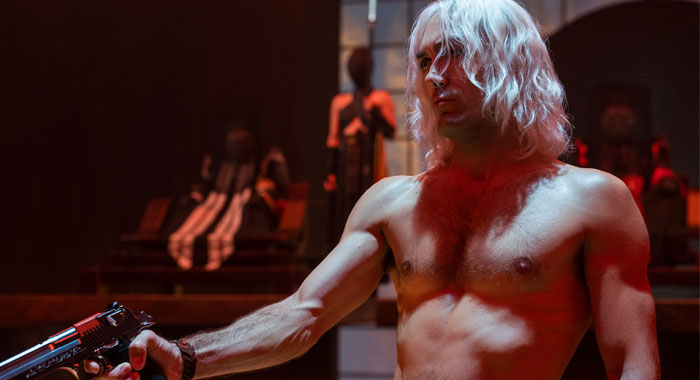 Not that we were great fans of the character in the anime, but Vicious – portrayed in the live-action adaptation by Alex Hassell – is played for laughs so often early on in the Netflix series that it is hard to buy him as a menacing presence once he lashes out at Julia (Elena Satine) or plots his coup against the Syndicate Elders. See also: the moment when tells Spike that killing him was all he could think about despite clearly devoting considerable brainpower to ending the rule of the Elders.

It’s a curious choice, more so as he is ultimately toppled by Julia as part of her plan to seize power. We suppose the idea was to illustrate just how ill-suited he was to lead, but it undercuts the physical threat he posed to Julia and her ultimate decision to claim the syndicate for herself. As it happens, Julia’s motivations are a new element for the live-action series, and that may be a factor in why Vicious ended up more cartoonish. Building her up as an opponent Spike cannot easily kill for emotional reasons may have meant sacrificing some of Vicious’s bite.

Of course, with the live-action Bebop remixing the anime’s ending to serve as a Season 1 finale, it’s always possible the dulled impact of Vicious may lead to something more interesting should the program return.