Hailee Steinfeld on Why Dickinson Is Unlike Anything Else on TV

Reclusive 19th-century poet Emily Dickinson gets a timely remix for the streaming era.

You know within the opening minutes of Apple TV+’s Dickinson that creator Alena Smith and star Hailee Steinfeld aren’t interested in telling a story about your mom and dad’s poet. This Emily Dickinson swears like a sailor (“This is such bulls—!” she says when told to fetch water before sunrise while her brother sleeps in); her personal soundtrack is filled out with hip-hop and Billie Eilish; and she’s in the midst of a secret lesbian affair with her best friend, Sue (Ella Hunt).

“I truly felt like it was unlike anything I had read … It was a period piece, but it felt very modern and had a very modern sense of thinking,” Steinfeld told Rotten Tomatoes recently in New York City. “To play this literary icon felt like an opportunity that I couldn’t pass up.” 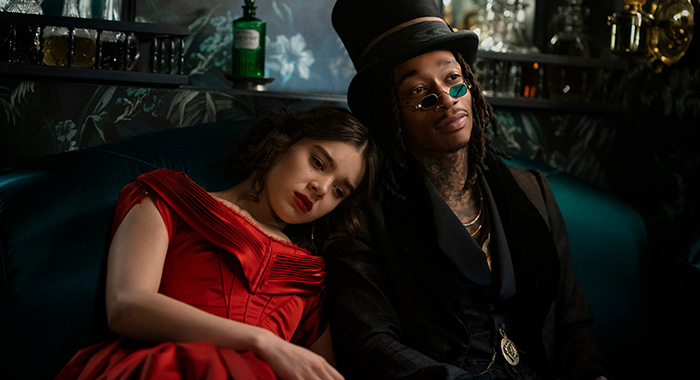 Steinfeld’s Emily has another intimate relationship with a guy named Death, whose smokey coolness is personified by rapper and singer Wiz Khalifa. Smith revealed that, in the series, Emily comes to have a more mature relationship with death when she loses someone close to her.

“In the beginning she is fantasizing that death will come and take her away from this life that’s driving her crazy. In the end, she lived into her old age, so death didn’t come for a long time,” the series creator noted of the poet, who died at age 55. “But we wanted whoever played Death to be kind of larger than life and to bring a sense of just incredible playfulness and wild coolness to the role, and I think Wiz was just the dream of who would do that. And then as soon as he read the script, he just really connected with the humor and the just the vibe of the show, and it was kind of amazing to me how easily he just slipped in to the whole thing.” 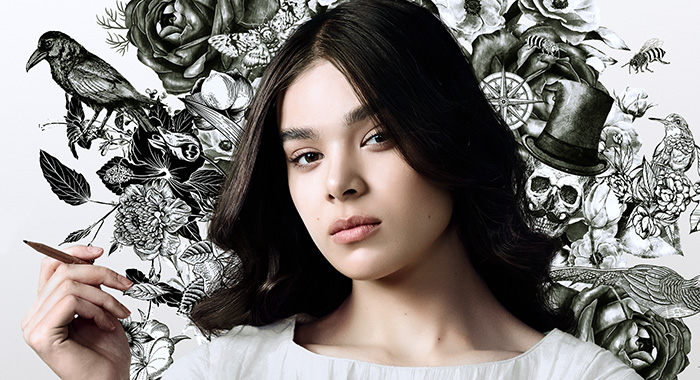 Considering she’s playing a young women who didn’t find literary fame until after her death, Steinfeld also relished the opportunity to explore Dickinson in a way that hadn’t been done before — to give voice to the young woman’s thoughts and to act out the dark, fantastical elements of her poems in a way that’s not entirely expected.

“I fortunately and unfortunately knew very, very little [about her] before this project. I loved that I could do my deep dive into her with the little facts that are known that are out there, but we got to dig even deeper and basically tell this story of what we think the inside of her mind might look like or feel like or sound like,” the one-time Oscar nominee said. 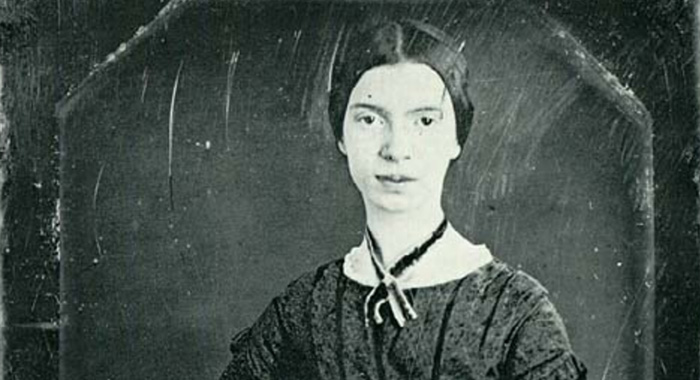 “The whole fun of making this show was taking this person that had this unbelievable imagination,” Steinfeld continued. “I mean, you could make an entire series off of one poem, and we had all of these poems and it was so great to pull from that and from her imagination and sort of combine it with ours.”

Smith was reading a biography of the poet when inspiration hit.

“I was so struck by, I guess, the ironies of her life and the fact that this woman was so passionate and fierce in writing almost 2,000 of the greatest, strangest poems ever written, but practically none of them were ever seen or appreciated or published while she lived,” the series creator said. “In our millennial era of everyone seeking attention for everything they do. There’s something very inspiring in that story of Emily working in secret.” 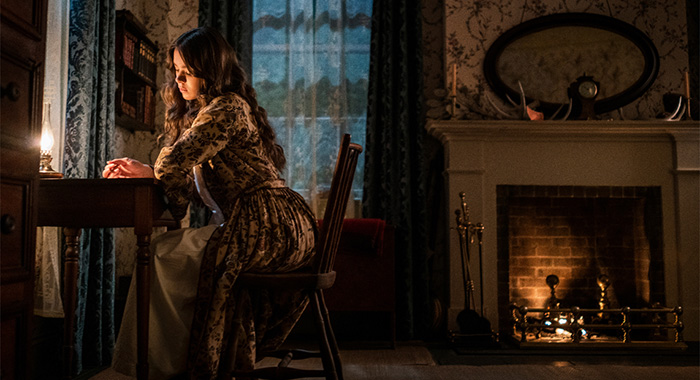 More than just the story of a brilliant artist, the series specifically explores the limitations Dickinson would have encountered in the 1850s due to her gender and presents this as the main reason she was only taken seriously as a master poet posthumously. The series also relates that she was expected to marry and become a dutiful housewife, social norms that Emily of the series refuses.

Gender parity — in everything from the pay gap to #MeToo and Time’s Up — is a conversation that continues today, particularly in creative fields and entertainment. Steinfeld could relate to Dickinson’s circumstances.

“I think that there are so many themes in this show that are wildly similar to events that we go through today in life, especially women,” she said. “But I do think that this is a character who fought against every constraint. And I do find that as a young woman today, we’re constantly fighting to be heard and understood. We have come a very long way and I’m very thankful for that, but I think the show will sort of open a lot of people’s eyes to the reality of what we’re still dealing with.” 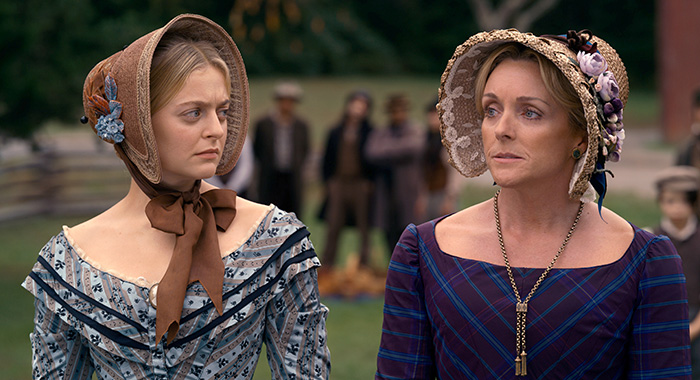 “It had such parallels to today’s young modern women, and that really surprised me,” she told Rotten Tomatoes, but for her role, she was the enforcer of such limiting expectations. “I think the parents represent the times, the world that we were living in, that patriarchal world.”

Krakowski recounted how playing a stern-but-dutiful housewife herself isn’t exactly a glass-slipper fit. Her Mrs. Dickinson practically lives in the kitchen, an arena in which she’s not a natural.

“First of all, this part was a real stretch for me because I can’t cook anything in a kitchen,” Krakowski joked. “She is known as the greatest homemaker of Amherst, in all of New England. My friends who know me very well are like, ‘We can’t believe 90 percent of your scenes are in a kitchen.’”

Fortunately, she was up for the challenge, not only spending most of her time in the kitchen, but even getting down and dirty in the house work.

“We did it so real. We actually were plucking those chickens…. It’s really hard to get it off your fingers…. You weren’t just a housemaid [back then], you weren’t just dusting; you were going out and killing dinner and then bringing it inside.” 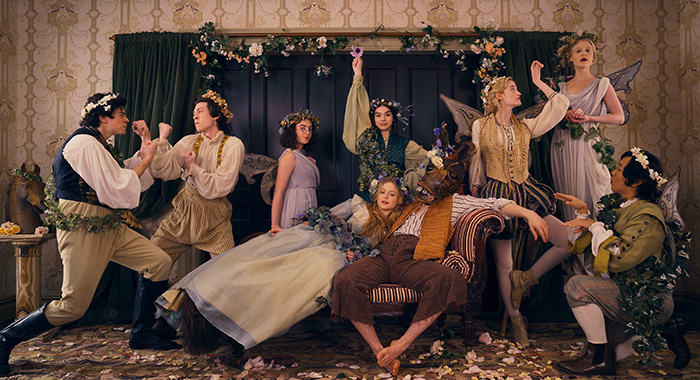 Dickinson seems primed for the Instagram-savvy generation, but more than a history lesson, Steinfeld hopes that it empowers viewers in the way it did for her while making it.

“I feel like I have this newfound fearlessness that I always knew was inside of me,” she said. “After playing this character, I feel like there’s nothing wrong with saying what’s on your mind and speaking your truth. I hope that young girls can see the show and feel that sense of fearlessness and bravery and wit and beauty that comes with doing what makes you feel good.”