The debut filmmaker shares her experiences of Juneteenth and why she felt the need to tell her critically acclaimed mother-daughter story.

Debut writer-director Channing Godfrey Peoples‘ Miss Juneteenth was one of the surprise hits of this year’s Sundance Film Festival, where critics singled it out for the charming ways in which Peoples unfurled its touching story. The movie tells the tale of Turquoise Jones (Nicole Behari), a single mom and former beauty queen who’s preparing her daughter, Kai (Alexis Chikaeze), for the Miss Juneteenth pageant, which she herself won years ago. Ahead of the movie’s release on June 19, Peoples spoke with Rotten Tomatoes about what Juneteenth means to her, the challenges of making her debut feature, and why she felt the need to tell Turquoise and Kai’s stories. 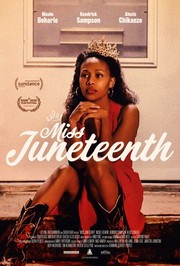 #1
Adjusted Score: 104.343%
Critics Consensus: Like a pageant winner walking across the stage, Miss Juneteenth follows a familiar path -- but does so with charm and grace.
Synopsis: Turquoise Jones is a single mom who holds down a household, a rebellious teenager, and pretty much everything that goes... [More]
Starring: Nicole Beharie, Kendrick Sampson, Alexis Chikaeze, Lori Hayes
Directed By: Channing Godfrey Peoples