Everything We Know About Halloween Kills

With the first official trailer promising a bloody and brutal return to Haddonfield, we're breaking down who's who, how it fits into the ever-confusing timeline, and why Halloween Kills is a slasher movie for our time.

If you really thought Michael Myers burned to death in Laurie Strode’s rat-trap basement bunker at the end of Halloween (2018), all we can say is we envy you in what is clearly your first slasher franchise experience. Not to stomp all over your new snow, but the Man in the William Shatner Mask is very much coming back again, along with ultimate Final Woman (c’mon, you’re not calling the incomparable Jamie Lee Curtis a “girl”) in Halloween Kills.

With our full first glimpse at Part Two – Part 2 Vol. 2? Part 2B? – in the form of a just-released full trailer, this franchise has gotten extremely messy with its timelines and continuity. To help, we have gathered up everything we know so far about Haddonfield’s favorite son and his refusal to retire gracefully.

Right from the start, director David Gordon Green (Our Brand is Crisis, Pineapple Express) and writer Danny McBride (yes, that Danny McBride) planned their return to the Halloween franchise as a trilogy. In fact, they intended to shoot all three back-to-back-to-back but decided to pause in between: First to gauge the response to Halloween (2018) and make sure fans and new audiences were down with their franchise-course-correcting efforts, and second, because, reportedly, Halloween Kills was a really intense shoot. In an interview with The Hollywood Reporter, actress Andi Matichak (who plays Laurie Strode’s granddaughter, Allyson) explains, “They thought about doing them back to back. But Halloween Kills was just so ambitious. It was such an intense shooting schedule that it would have been a bit much to try to do them at the same time.” The final installment, bluntly titled Halloween Ends, is slated for a 2022 release.

The Intention Is to Establish a Definitive “Story” 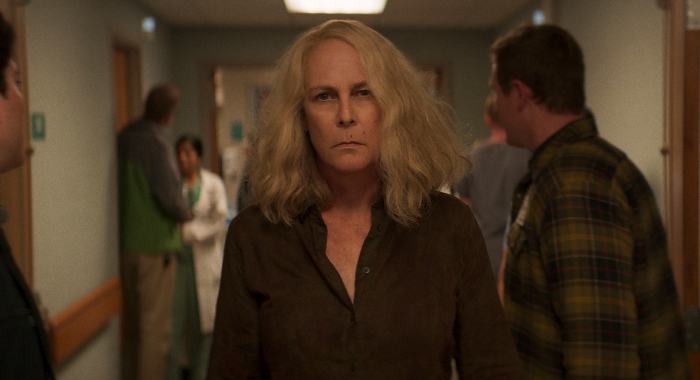 Perhaps no horror franchise is messier than Halloween. You’ve got reboots, remakes, disowned sequels, and warring continuity all jumbled together into a hodgepodge of indecipherable nonsense. There’s the original 1978 Halloween, then the straight sequel Halloween II (which added the “huh?” element of Laurie being Michael’s sister), and then things get really nutty. Halloween III: Season of the Witch takes a hard left turn by having nothing at all to do with Michael Myers or Laurie Strode. (It’s a standalone story about a sinister corporation making killer Halloween masks.) The franchise then spiraled into increasingly silly and more generic cash-ins like Halloween 4: The Return of Michael Myers (which added the “huh?” of Laurie having a daughter named Jamie out of nowhere); Halloween 5: The Revenge of Michael Myers (said daughter shares a psychic link with Michael? Because, sure, why not?); Halloween: The Curse of Michael Myers (Um, Michael was “created” by a Druid cult?); then Halloween H20 (which sees Curtis return as Laurie because this movie pretends that Halloween 4, 5, and 6 didn’t happen – the first but not last instance of selective memory); and then Halloween: Resurrection (also known as the one where Michael fights Busta Rhymes). Exhausted? We’re not even done.

After all this, Rob Zombie decided to do a complete reboot with Halloween (2007) that starts from scratch with new actors, and then he followed it up in 2009 with a second Halloween II. And finally, in 2018, Green and McBride gave us their own Halloween, which is actually a third try at Halloween II, since it’s meant to be a direct sequel to the original 1978 Halloween and ignores everything that came after it. Whew. It’s a lot, but streamlining and focusing the main storyline is exactly what this franchise needs – especially since it looks like the events of Halloween, Halloween Kills, and Halloween Ends will all take place in a relatively short period of time.

There Is No Time for Downtime 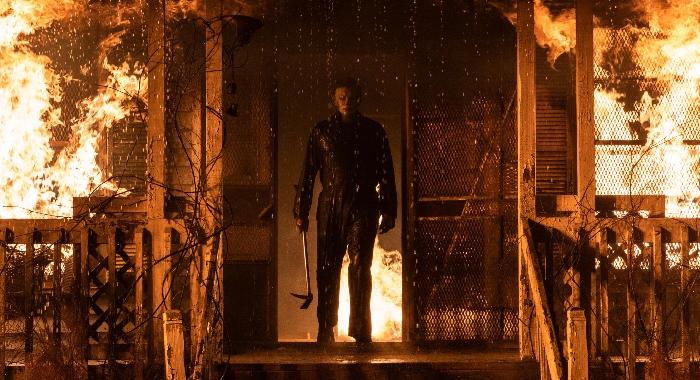 As you can see at the start of the trailer, Halloween Kills implies the movie – like the 1981 Halloween II – will pick up immediately after Halloween. Very immediately. We see Laurie, her daughter Karen (Judy Greer) and Allyson literally still in the back of the pick-up truck where we last saw them at the close of the first movie. It seems like the intention here is to keep the story tight and quick – all three movies may take place over the course of a few hours or days when all is said and done.

The Gang’s (Almost) All Here…

Although it’s a shame the late Donald Pleasence won’t be able to join in as indomitable Myers hunter Dr. Loomis, Halloween Kills is taking a page from Cobra Kai and bringing back all of the familiar faces (or at least character names) that it can. Actress Nancy Stephens will reprise her role as Marion Chambers, a nurse and colleague of Dr. Loomis who appears in the original Halloween (and the original Halloween II and is actually killed off in the opening of now-retconned Halloween H20) – which seems especially appropriate given that the trailer suggests Halloween Kills could heavily reference the original Halloween II with some hospital-based horror. Kyle Richards (of Real Housewives of Beverly Hills fame) will return as Lindsey, one of the two kids Laurie babysat in the original 1978 film, and Charles Cyphers, who played Haddonfield sheriff Leigh Brackett (whose daughter Annie was one of the original film’s victims), will also be back. A grown-up Lonnie, who is name-checked in the 2018 movie, will actually show up too. And finally, the character of Tommy Doyle (the other kid Laurie babysat in 1978) will be back as well… for the second time.

…But Some Will Have New Faces

Yes, Tommy actually returned once before, in 1995’s Halloween: The Curse of Michael Myers, where he was played by none other than Paul Rudd (Ant-Man). Read that again: Yes, it’s 100% true. Although it would be absolutely show-stopping if Rudd reprised his role in Halloween Kills, it’s just not happening. But Tommy will be played in Halloween Kills by another cult icon: Anthony Michael Hall.

Halloween Kills Is About Haddonfield 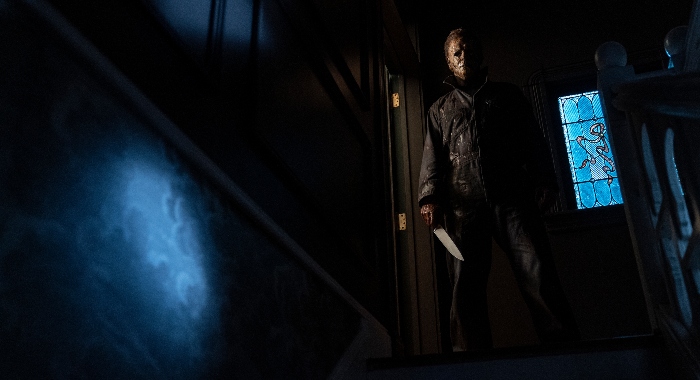 The 2018 Halloween dealt primarily with Laurie’s trauma, and how it shaped her life and turned her into a paranoid, bunker-dwelling alcoholic. But there is more than nostalgia behind bringing back so many old characters – Laurie wasn’t the only one traumatized by Halloween night, 1978. The trailer shows glimpses of the town’s collective angst, and the movie was filmed under the working title “MOB RULES.” This installment is about all of Michael’s victims facing unstoppable evil once again and confronting their own traumas and scars – from the nurse who treated Michael in the sanitarium to the sheriff who couldn’t protect his own daughter, much less the town. It may be The Town of Haddonfield vs. Michael Myers.

The Collective Anger Will Be Intentionally Timely

In a recent interview, Curtis explained more about the “mob rule” theme behind Halloween Kills and how it was influenced by the politics of the past four years. She says the movie will deal with “what happens when trauma infects an entire community, and we’re seeing it everywhere, with the Black Lives Matter movement. We’re seeing it in action, and Halloween Kills, weirdly enough, dovetails onto that.” Speaking with NME, director Green added, “it’s one thing to be afraid of the Bogey Man, to have someone who might be in the closet, under the bed, creeping around your house, but what we wanted to explore next was confusion, misinformation, and paranoia. What happens when fear goes viral? You can’t stick your head under the covers anymore.”

Only COVID-19 Could Stop Michael Myers

Halloween Kills has been in the can for a while now. It was originally due to come out in October 2020 but was held back due to the COVID-19 pandemic and the mass closure of theaters.

The Other Big Man Is Back, Too 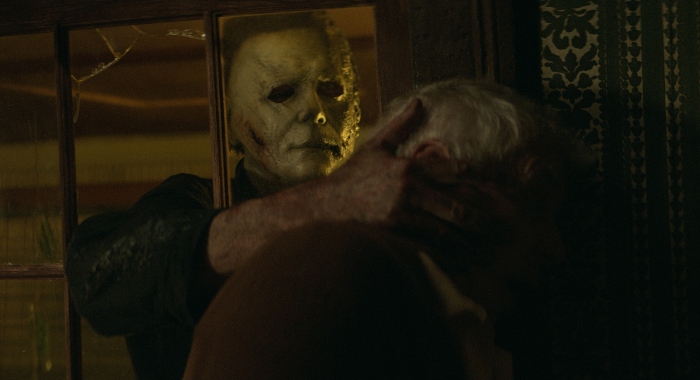 One of the reasons fans were excited about the 2018 Halloween wasn’t just because it meant a proper return for Laurie Strode/ Jamie Lee Curtis (can you believe they tried to kill her off – via an off-screen car accident, no less – in Halloween 4? Put some respect on her name), there was another monumental reunion to celebrate. For the first time since the disastrous Halloween III, John Carpenter agreed to lend his name to a Halloween project not only as a producer but also to retool and revamp his classic score alongside his son (with The Fog actress Adrienne Barbeau) Cody Carpenter and Daniel Davies (son of The Kinks’ Dave Davies). The trio will be back for Halloween Kills (and Halloween Ends).

It’s Going to Be Very Bloody… Even Carpenter Was Shocked

When asked by MovieWeb about Halloween Kills, new writer Scott Teems – who came on to collaborate with Green and McBride on the sequels – called it “like the first one on steroids, I guess. It really is the bigger, badder, meaner version of the first one.” If that’s enough to make horror hounds howl, even Carpenter himself was taken aback by the new film’s bloodlust. Speaking to IndieWire, Carpenter mentions seeing an early cut of the movie and describes it as “fun, intense, and brutal, a slasher movie times one hundred, big time. It’s huge. I’ve never seen anything like this. The kill count!” When a Master of Horror is that impressed, you know you’re onto something…