Jigsaw, Agent Orange, the Battle Van, and more from The Punisher's comic book history turn up in the Netflix series. 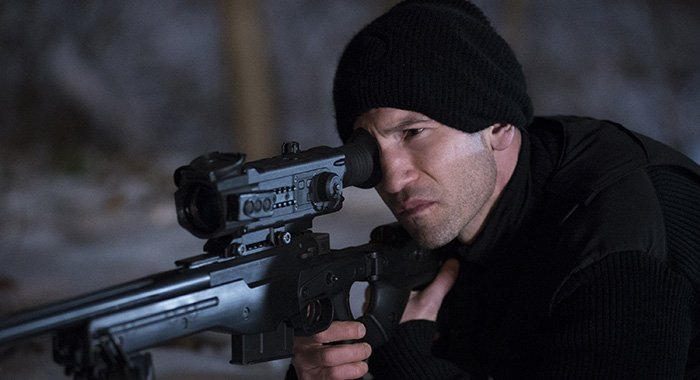 Perhaps more than any of the other Marvel Television programs on Netflix, The Punisher created a number of key characters and situations out of whole cloth. Characters like DHS Agent Dinah Madani (Amber Rose Revah), her family, Lewis Wilson (Daniel Webber), and Carson Wolf (C. Thomas Howell) are new additions to the lore. The plot itself also re-writes Frank Castle’s mob-centered origin story into a modern tale of black ops and blowback. But it also makes great use of some of The Punisher’s long and storied history within Marvel Comics. Here (in no particular order) are six of the best comics-to-TV adaptations in Marvel’s The Punisher.

Spoiler warning: This article includes plot details from season 1 of The Punisher. Turn back now if you haven’t watched the full season. 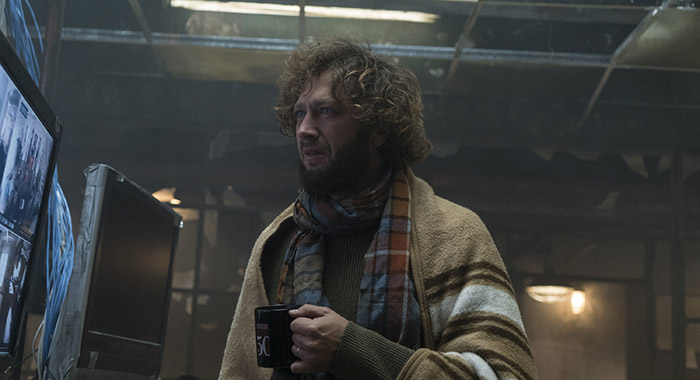 At the end of episode 1, Micro (Ebon Moss-Bachrach) watches video of Frank’s attack on the Gnucci poker game and says, “Welcome Back, Frank.” The line itself is the title of a 2000 Punisher story line by Garth Ennis and Steve Dillon of Preacher fame. The story, published as part of the Marvel Knights imprint, saw Frank get back to basics after years of working with teams, running a crime family and even becoming an agent of the angels; killing on behalf of the highest authority. Ennis jettisoned all of that for a satire starring a man with a lot of guns and a bone to pick with the Gnucci crime family. It also features the best Punisher/Spider-Man team-up ever published.

But quoting it in the context of the television series is more than just a nod to fans of the Ennis/Dillon run on the comic book. It also heralds Frank’s acceptance of violence after a five-month sabbatical and Micro’s glee at finally finding the man.

Since 1975, The Punisher’s Battle Van has been a key part of his mission to end all crime his way. Initially modeled on a generic Ford-style delivery van, the vehicle was eventually tricked out with everything Frank would need to shoot the bad guy. It also probably got terrible gas mileage despite a “high-efficiency” a/c unit. But considering the van had a habit of getting destroyed, maybe Frank eventually found an engine that could get great MPG in one of his replacements.

In the series, Frank has two Battle Vans. The first is briefly glimpsed in the opening moments and recalls the generic look of the initial van. The second one Frank and Micro “acquire” together at a chop shop. It is a sleeker ride with some modest customization, but it never receives the high-tech upgrade Frank’s vans get in the comics. Granted, it’s not like Micro had much time to soup it up with onboard weapons, hide-away racks for Frank’s firearms, peel-away paint or a permanent mobile command unit for that ever-helpful drone. And considering the van is maybe two or three years old, it probably gets OK gas mileage. Those gas stations stops on the way to Kentucky must’ve been a hoot, though.

No matter the specifics of the van, its inclusion is a welcome homage to the days when Frank tooled around in a slightly incongruous ride. 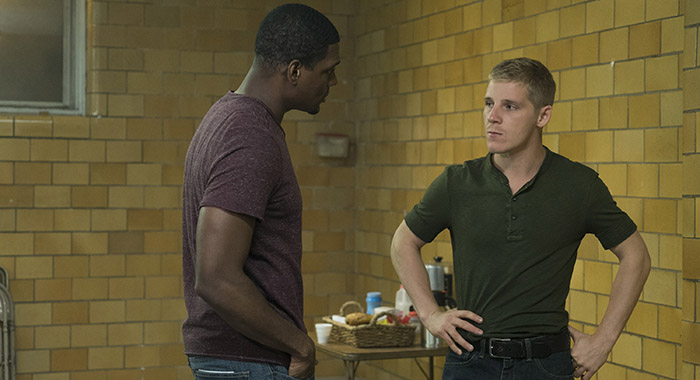 From the late 1980s to the mid-1990s, The Punisher was such a successful title for Marvel Comics that the company started two spin-off titles: The Punisher War Journal and The Punisher War Zone. With that much Punisher on the shelves every month, it meant plenty of opportunities to introduce new villains or dig into Frank’s past.

Senator Stan Ori (Rick Holmes), for example, appeared in two issues of War Journal during “The Sicilian Saga” story line. Though an antagonist in that that story, he suffered a quick death — an ongoing problem in trying to create a rogues gallery for Frank. But a great name for the pro-gun-control senator with a weak constitution and a penchant for lying featured, somewhat pointlessly, in the television series. Perhaps his inclusion will lead to a bigger story should there be a second season.

Curtis Hoyle (Jason R. Moore) is another name plucked from the deepest reserves of The Punisher’s comic book history. On TV, he is Frank’s most trusted ally. But in The Punisher (Vol. 2) #1-#2, he played more of a Billy Russo role as private military contractor who recognizes fellow Vietnam vet Frank Castle when the latter tries to infiltrate the business. Attempting to lure Frank into a trap, Curtis soon finds himself pushed out of a helicopter by The Punisher.

It is interesting to note that showrunner Steve Lightfoot would pick that name for a character who is, for the most part, original to the television series and who highlights the plight of Afghanistan and Iraq War veterans. In fact, reframing Frank as an Afghanistan vet makes very pointed connections to Vietnam and the state of mind of The Punisher in his original comic book form. It would be interesting to see a second season of Punisher take more cues from this concept. 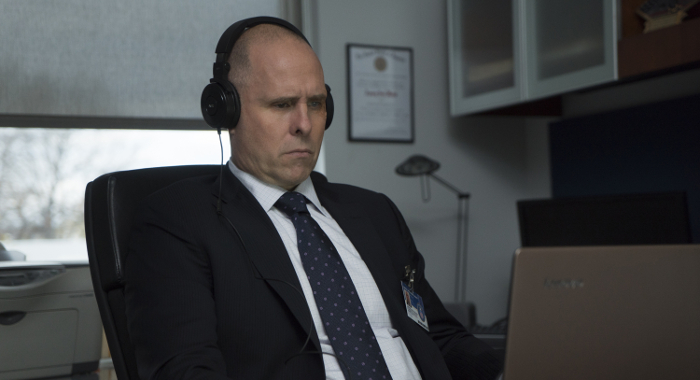 From the way Frank and Micro throw around the name “Agent Orange,” you might think he’s based on a flamboyant – and topical – Punisher foe from the early 1980s. Surprisingly, there are a few Marvel Comics characters claiming the name Agent Orange. One is an obscure S.H.I.E.L.D. agent with no connections to Frank whatsoever. A more villainous S.H.I.E.L.D. agent named Roger Goshaw also used the name in Captain America/Nick Fury: Blood Truce #1, but also never became a Punisher antagonist.

Like Curtis above, the use of the term “Agent Orange” — a herbicide used as a chemical weapon in Vietnam and later identified as the source of mysterious ailments suffered by veterans of that war — makes a very pointed connection between the United States’ actions in Vietnam and Afghanistan; which makes sense once Frank and Mirco discover who “Agent Orange” really is.

William Rawlins (Paul Schulze), unlike the various Marvel Comics Agent Oranges, is a Punisher antagonist with a very similar agenda to his television counterpart. A corrupt CIA man who first appears in issue #14 of Ennis’s Marvel Max Punisher series, he involves himself in a mob plan to get The Punisher. Frank eventually gouges his eye out, setting the tone for their relationship. Rawlins uses everything from CIA assets to mob grudges to his own flexible sexuality to get information and further his objectives. Most of his operations took place in Afghanistan, with Frank eventually murdering him in the Kabul Airport.

In choosing him as a primary antagonist for the television series, Lightfoot and the rest of the writers had a perfect character to slot into Frank’s heavily revised origin. It is no accident that he is one of the more successful characters on the show — well, at least until he gets goofy while torturing Frank. But he also continues the thread of powerful officials sending men and women in to commit immoral acts on the battlefront. An antagonistic force that Frank will always have to confront if he continues to be The Punisher. 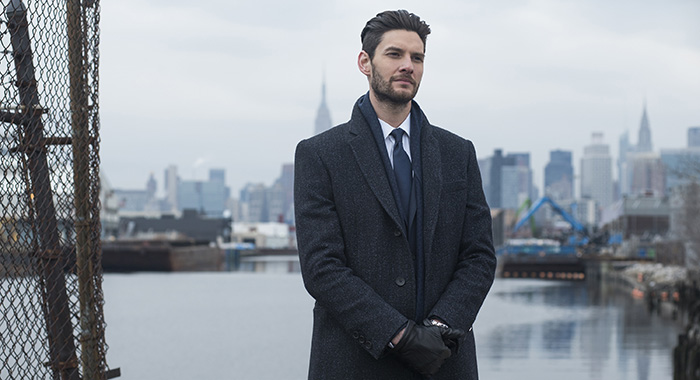 Perhaps no character on the series is more successfully recontextualized than Billy Russo. In the comics, he was a mob hitman known as “The Beaut” whose first encounter with Frank led to some unwanted cosmetic surgery. With their conflict now personal, he adopted the “Jigsaw” moniker and became one of the few guys in New York who was definitely more dangerous than The Punisher.

In turning him into a vain war profiteer with hints of sociopathy, the show creates a man whose connection with Frank goes very deep. It is also tragic — particularly in light of the scene at the carousel before Frank’s family is murdered. And it all leads to a particularly gruesome moment in which Billy’s face is literally destroyed.

Fans of Punisher knew it was coming from actor Ben Barnes first onscreen appearance, but nothing puts a finer point on his eventual need for face work than when Billy introduces the notion of Frank looking at himself in the mirror a few episodes before the finale. The actual moment is filled with emotion while grossing out the viewer. But it also frames Billy as the antagonist of the series.

At the same time, the writers should be commended for never introducing the word “jigsaw” in any way so the moment could have maximum impact for those new to The Punisher and its lore. It would have been very easy to tip the hat and make “Jigsaw” Billy’s callsign, for example. 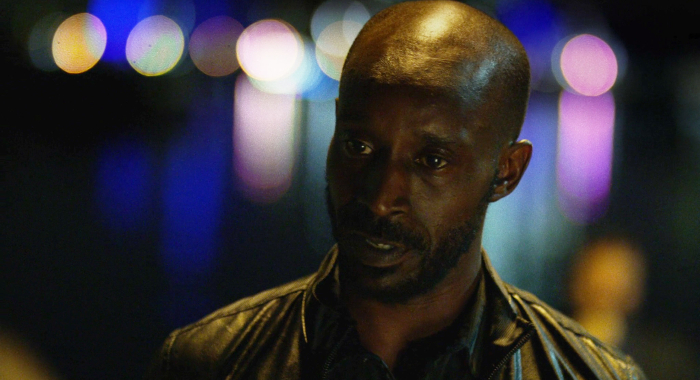 This one is mainly a bonus as Turk Burnett (Rob Morgan) once again finds himself on the wrong end of a Marvel protagonist’s mission. In the Netflix New York, he’s been confronted by Daredevil and Luke Cage. He also had a run-in with the Defenders. In the pages of Marvel comics, he’s faced just about everybody since his debut in a 1970 issue of Daredevil; stealing costumes from Mauler and Stilt-Man in his attempts to get back at Daredevil.

But whether he’s in a costume or getting pistol-whipped in a shipping container, it’s nice that the Marvel TV shows can keep this character alive and offer small interconnecting ideas — even if The Punisher‘s story line makes Iron Fist look like Muppet Babies.

Marvel’s The Punisher is now streaming on Netflix.